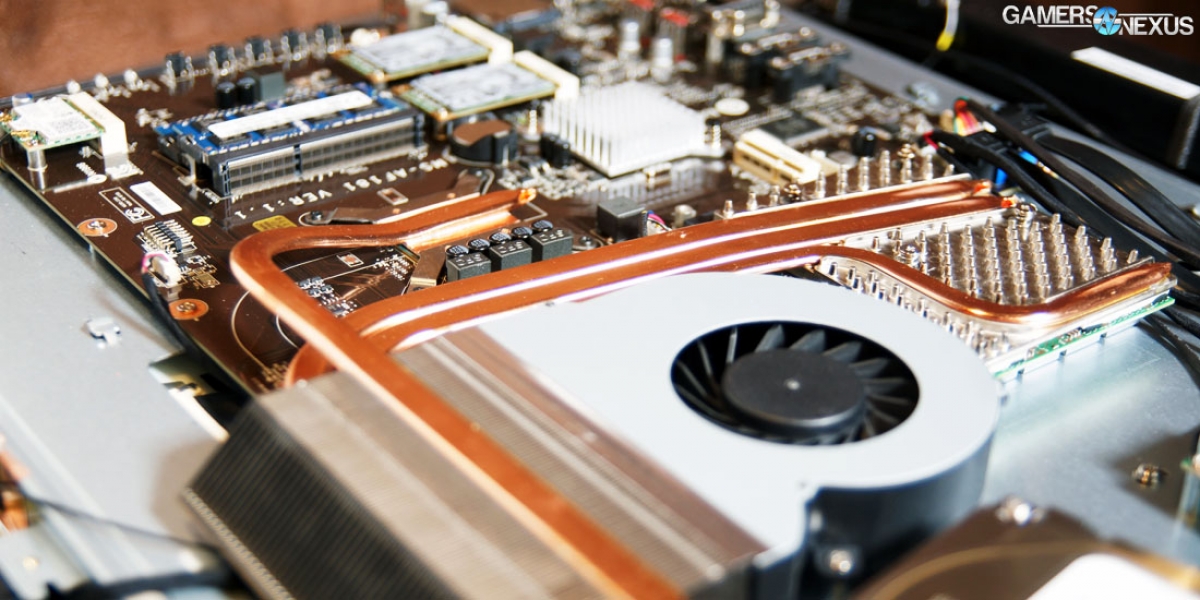 Nearly all modern AIO systems are built using laptop components. This permits smaller form factor and better thermal control in a cramped space. In the case of the AG270, the unit is fitted with an nVidia GTX 980M mobile GPU – the same GPU in the CyberPower and Origin laptops we recently reviewed – and hosts an i7-4870HQ CPU. The 4870HQ is among Intel's top-performing mobile Haswell CPUs and is fitted with an Iris Pro 5200 IGP for low TDP graphics processing. Because the MSI unit isn't reliant upon battery power, as a laptop would be, the Iris Pro IGP will go largely unused except in some accelerated applications. The system's also got 16GB of DDR3-1600 memory installed.

A lower-end 4710HQ version of the system retails for around $2500, with the $2000 model slashing the touchscreen and dual SSDs.

Storage of our model sees the utilization of RAID two 128GB Plextor M6M mSATA SSDs for a total usable size of ~240GB. A standalone mSATA M6M is advertised and rated for ~520MB/s sequential read and ~440MB/s sequential write, with 4K IOPS ratings upwards of an impressive 94K & 80K (read/write). The RAID configuration allows even greater speeds than these. A 2TB Seagate Barracuda HDD offers storage space at 7200RPM, making for plenty of media and gaming storage. We generally don't favor Seagate for its lower end consumer HDDs due to their failure rates, but the inclusion does reduce cost over similar WD alternatives.

Wireless is built-in using an Intel dual-band AC 7260 chip – the same as you'd find on a laptop or some high-end desktop motherboards. Wireless AC offers greater throughput for users fortunate enough to live in an area with gigabit internet.

Use Cases, Pros, & Cons of an AIO Computer 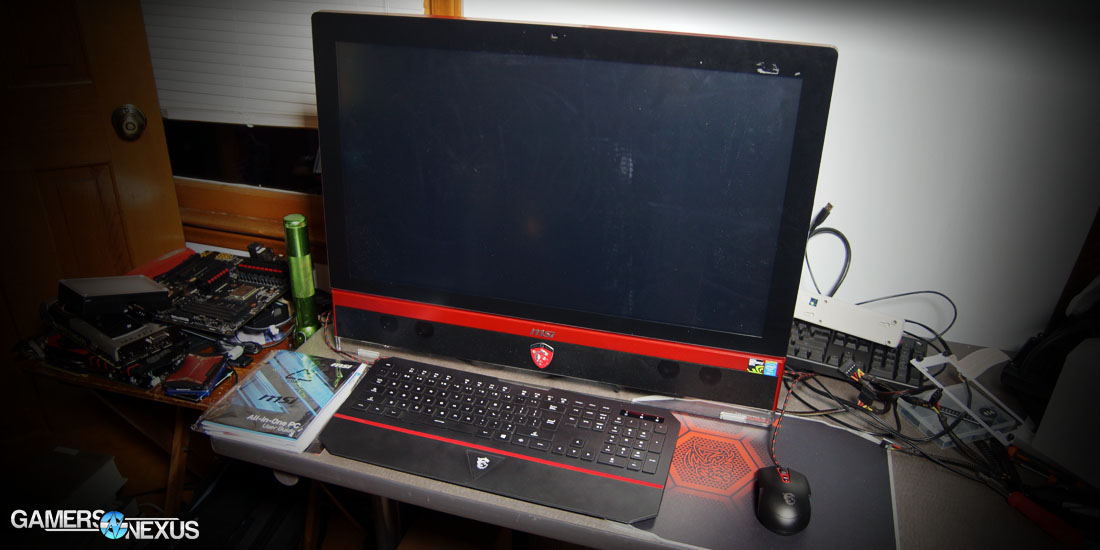 As I see them, AIO systems would primarily be found in living rooms or common areas, effectively serving as family or visitor machines. Because an AIO mounts its hardware to the back of the display, it's slightly more space efficient than an SFF system + monitor setup and sleeker. It's not more “portable” by any means, though, evidenced by the unwieldy dimensions and ~30 pound weight.

Unimportant to me, but definitely of value to others, is the aesthetic factor of AIO computers. An AIO can be presented in a somewhat modern and clean fashion, limiting behind-the-system cable clutter and eliminating the need for an enclosure with system components. Although a silent SFF system could easily be built – even using some of MSI's own components, like the Gaming 4G cards – AIOs offer effective silence (think: laptop) in a pre-built fashion.

That's about all there is to it – presentation and compact design.

The list of cons sort of fluctuates dependent upon what type of user the buyer is. An AIO is expensive – that's number one. You're paying for the look, the compact design, and the form factor. An AIO might also include features which are undesired or unneeded for the user; the touchscreen, for instance, seems an odd choice for a gaming box with a 980M. It'd make more sense equipped with something more targeted toward casual users, as very few “core” games (demanding of a 980M) would be enjoyable with a touchscreen. That's a big added cost that doesn't necessarily get used. This is countered by the $2000 alternative, but then we lose other features – like the higher-end CPU and RAID SSDs.

Other cons would include aging of the box: If one component goes, unless you're the type to source parts and fix it, the whole thing goes – monitor and all. 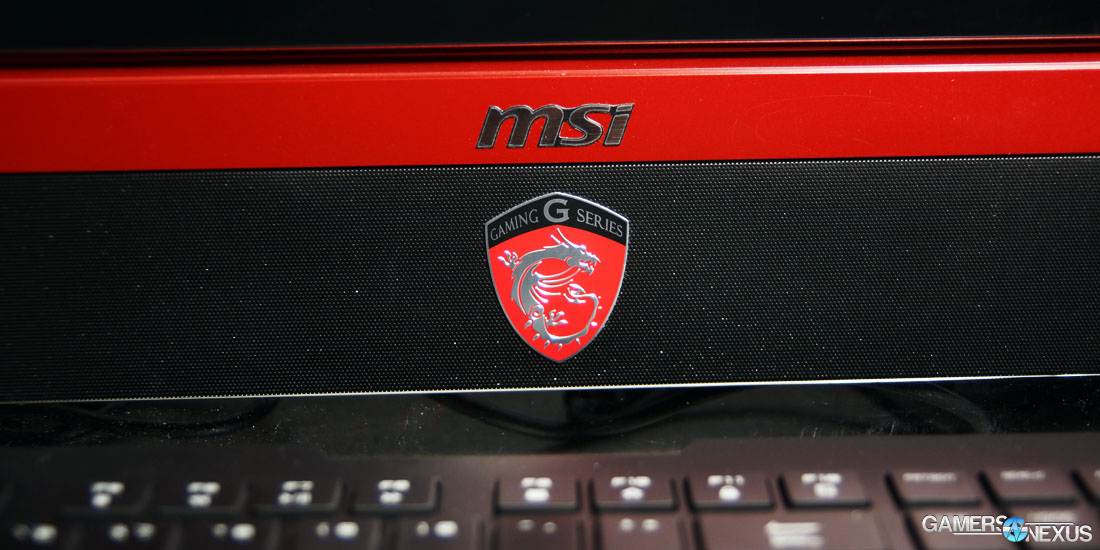 As above, the inclusion of a touchscreen on a gaming-targeted device is interesting. The AIO ships with painting software that goes well with the touchscreen and makes for a bit of fun, but certainly isn't the pressure-sensitive professional quality that would be offered by a proper artist's tablet. It comes off more as a novelty that grows old (and frustrating) within the span of an hour. We also found it incredibly tiring to use the touchscreen functionality from a seated position; the positioning of the display is not inherently conducive to extended touch use, leading to tired arms after a few minutes of waving them around in the air.

As for actual input detection, the unit functions fine. It's comparable to a $500 Acer 10-point touchscreen in responsiveness. The display can detect ten points of input simultaneously and coincides with the push for touch-friendly operating systems (Windows 8.1 pre-installed), but again, I just don't see it getting used the majority of the time. Unless working with an application or game that specifically designs for touch input, it becomes more of a burden than productivity boon to use touch. It's a good arm workout, though.

MSI has elected to include a fallback in the form of traditional keyboard / mouse input, thankfully, but it leaves a lot to be desired – like a mouse and keyboard. Over the period of testing, we've had two sets of hands on the AG270 for thermal and FPS benchmarking; in both instances, we elected to replace the included keyboard and mouse with items that were more precision-tuned and less hindering to production.

Starting with the mouse, MSI's DS100 gaming mouse offered terribly inaccurate input, to the point that it was tracking on its own (flickering, exhibiting spurious motion) when no hands were laid upon it. The touchscreen was originally suspect for the 'teleporting' cursor actions, but we later discovered that the mouse was responsible for the undesirable input. Replacing this would be a priority.

The keyboard doesn't have to be mechanical to be good, but MSI's DS4100 “Interceptor” keyboard isn't one of those good non-mechanical boards. The keyboard more closely resembles laptop input, except somewhat inhibited; poor layout plagues the keyboard – like the size of the return key and position of the forward backslash – and actuation makes for uncomfortable and awkward typing. Using our test Logitech G910 or Tt eSports Poseidon (mechanical boards), I'm able to produce a words-per-minute rate of ~120WPM. Using a membrane Logitech G11, it's about ~108-112WPM. On the DS4100, my WPM plummets to about 70 due to poor responsiveness of keys and the heavy load placed on 'backspace.'

It's incredibly irritating to use and would be better replaced by decade-old Microsoft or Dell keyboards, sadly.

This isn't a big deal, but it just feels like wasted allocation of resources. If I'm spending $2700 with the promise of an included mouse and keyboard, they should be at least passable for use; if they're not, don't include them – I'd rather just reduce MSRP than spend more money on components that end up in the trash.

Volume levels are always of note when working with laptop components. With an AIO, part of the “sell” is the reduction of cabling and other desktop clutter – that'd include speakers. MSI's AG270 offers powerfully loud audio at its highest volume level and likely won't be “too quiet” for anyone. The output errs on the tinny side due to its lack of any form of subwoofer, but it's more or less “fine.”

If MSI were to make improvements for a next-gen version of this product, I'd suggest investigating the inclusion of a woofer in the rear side of the system, similar to what's done on some MSI laptops. Not a big thing, but worth noting for growth.

Continue to page 2 for gaming benchmarks, thermals, and the conclusion.