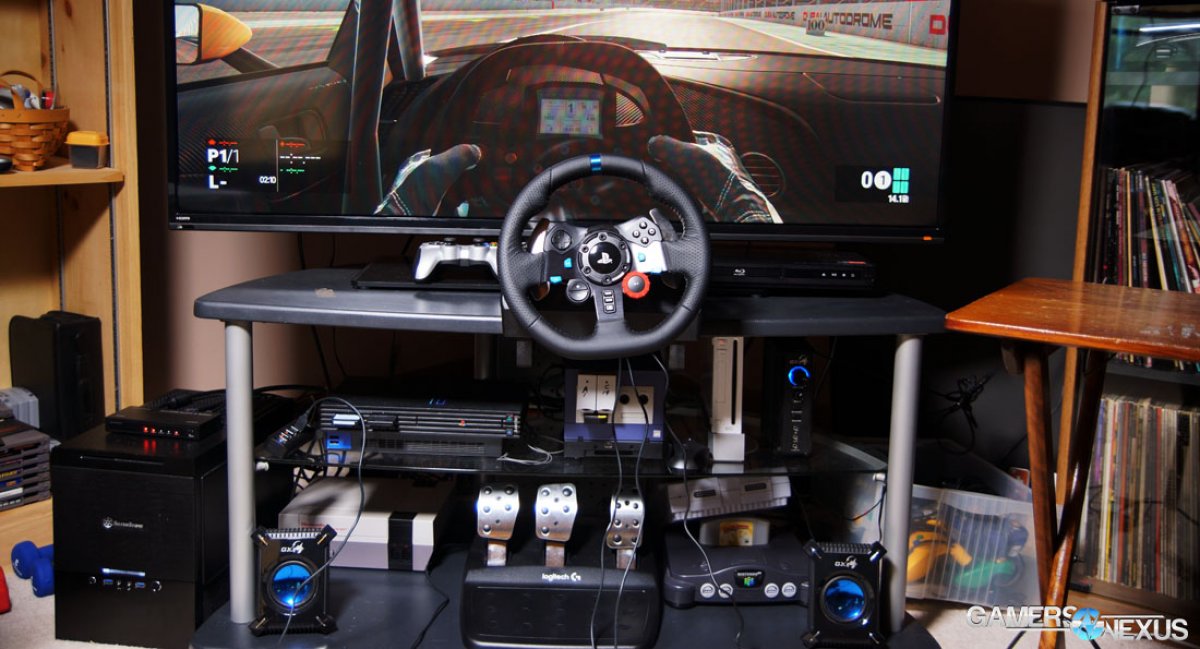 Racing wheels are to driving games what HOTAS is to flight sims. Logitech's new G29 racing wheel is undeniably a “premium” gaming input device, priced at $400 and stitched in real leather. Its full name is “G29 Driving Force,” likely named for the attention paid to force feedback, and its counterpart is the G920 for Xbox users.

Racing wheels have likely been experienced by most readers of this review in arcades, if not from previous in-home experience. Most of the arcade racers deploy some similar concepts, like force feedback and vibration, but do so with more simplistic execution than what modern racing wheels market. The G29 is an attempt at bringing high-quality, simulation-ready racing into the home.

There aren't many high-end racing wheels on the market. It's a niche segment and good products have a high bill of materials (cost) compared against more standard peripherals. The Thrustmaster T500RS is among the most popular solutions at the high-end (for PS3), selling for $600 and using belt drive mechanics for the wheel and its motors. A modernized version, the T300RS, is in more direct competition with Logitech's G29 at $400 for the wheel and pedals.

The Logitech G29 ($400) is a refreshed successor of the company's G27 ($240) – this summer seems to be a summer of refreshes – and adds support for current-gen consoles. Support for PC is retained on the G29. Let's go through the differences of these two same-brand products before diving into the full review and cross-brand comparisons. 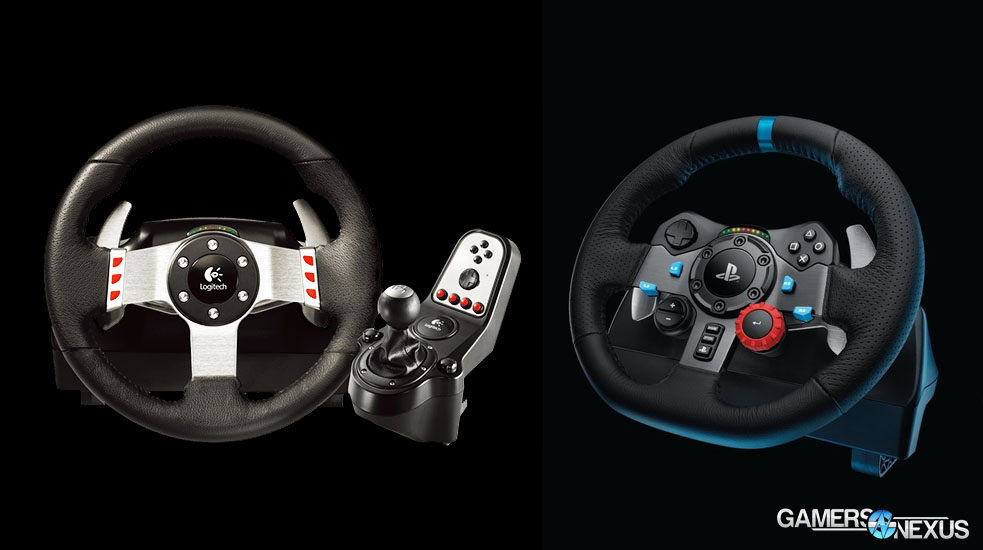 Logitech's G27 racing wheel came out in 2009. The G27 has the same overall wheel size as the G29 (270 x 260 x 278mm HWL), similar stitching, the same wheel geometry and grip points, and the same pedal platform. The most immediate items of note differentiating the G27 and G29 are as follows:

These are the differences. For the rest, owners of the G27 can expect much the same overall look and feel. The underlying mechanics still utilize a helical gearing system for the rotation and offer the same gritty, tactile feel.

Logitech's implementation of an upgraded encoder and hall-effect sensors theoretically improves accuracy of wheel calibration, though we suspect that the greater benefit will emerge in endurance testing.

Hall-effect sensors use electromagnetics to establish orientation and positional tracking, a task completed using optical sensors in other wheel sets. Most high-end wheels have made the move to hall-effect sensors.

Use Cases: For the Racing & Sim Enthusiast 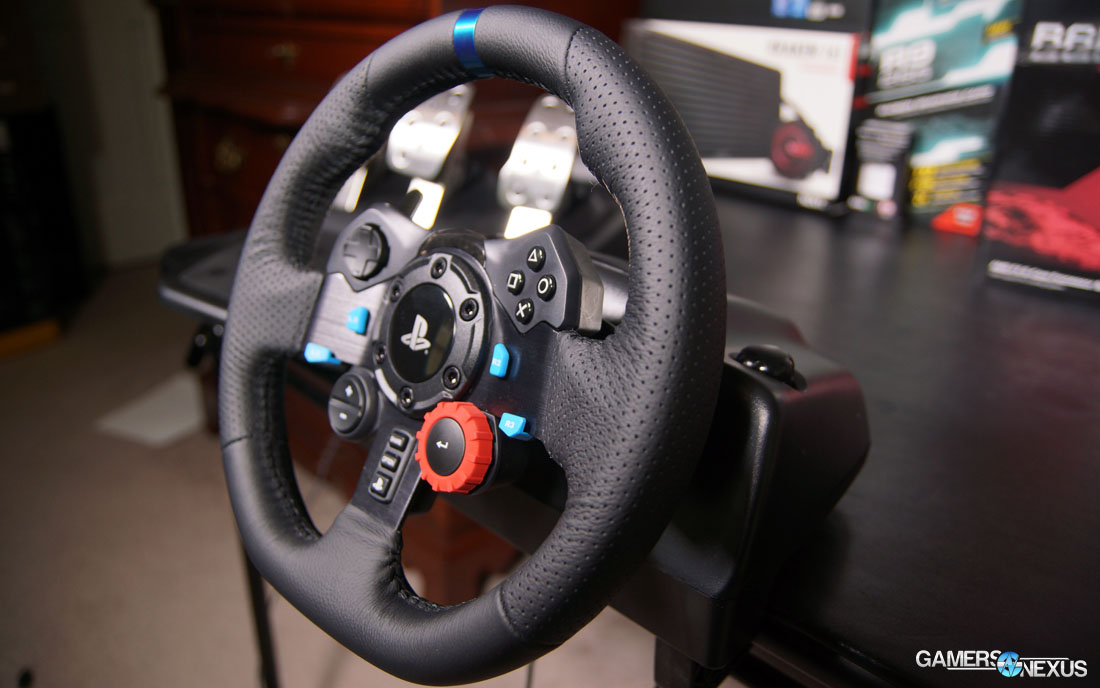 Racing wheels of this grade are intended for the enthusiast. Price immediately puts the wheel in rivalry with entire budget PC builds, but that's not the only restriction – there are hidden costs. Deploying a racing wheel requires something to which the wheel can stably mount. A light folding table, for instance, would not work given the aggression with which force feedback operates. Ideally, you end up with some sort of racing seat that's got mounting bars (like the Playseat) for a wheel and pedals, but not everyone's got room for that. Account for setup/tear-down requirements if using existing living room furniture or account for specialized purchases. Those can easily add another $300. 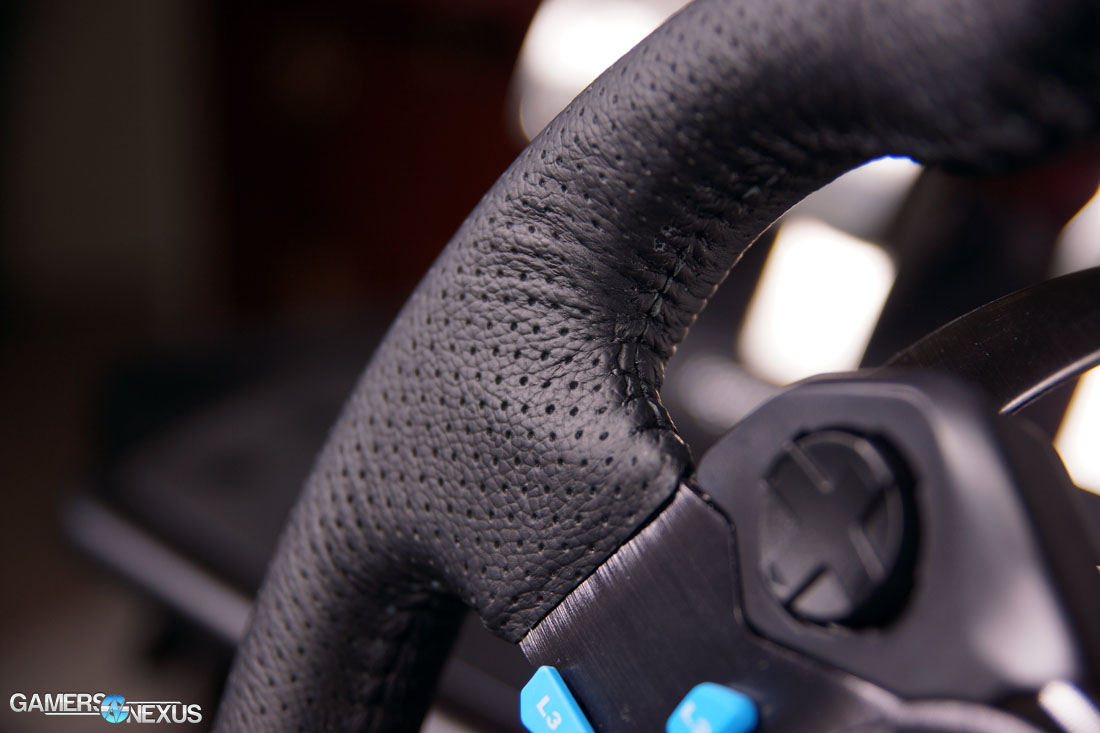 Logitech's build quality is superb. The wheel is outfitted with hand-stitched leather and offers the texture, grip, and feel of a real car wheel. There's some disconnect in the size difference – Logitech's wheel is a fair bit more compact than what you'd find in your car – but that's something we can look past for easier stowing.

The wheel surpasses some nearby competitors that use rubbery grips, which grow hot and uncomfortable in long sessions. We found the leather to breathe well while offering a true-to-life grip.

The flappy paddle shifters offer sequential (double-clutch style) shifting, though a clutch pedal and shift stick are available separately (we did not test these). Flappy paddle shifting is clicky and resolute with thanks to the use of metal for the shifters. There's no doubt when a shift has been made.

Rotation of the wheel is relatively smooth, but not nearly as smooth as a belt-drive wheel would offer. This is potentially one of the downsides of the Logitech G29, but it ultimately depends on user preference. I like the gritty feel, though it may feel at times as if you are engaged in combat with the wheel.

We found that the wheel base is sturdy enough to offer stability and to oppose wobble when aggressive force feedback is sent through the wheel. The wheel didn't shift when mounted to an appropriate, sturdy surface, and the wheelbase is weighted heavily toward the back and bottom. This keeps the center of mass positioned squarely opposing the driver's own downforce from grip.

Force feedback executes flawlessly on the Logitech G29. The driving force exerted is representative of what would be felt in a real car, adding to the racing experience something which is sorely lacking. For those who've never used a racing wheel before (and you can buy a cheaper one, like the G27, for the same thing), the change from keyboard/controller to a wheel is phenomenal. Sliding around a corner suddenly triggers the wheel to fight back, just like taking a corner too hard in the real world, and adds immensely to the level of immersion.

The pedals have two forms of underside grips: Rubber feet for hard surfaces and deployable claws for carpet. The carpet claws work, though we had some sliding on harder surfaces given the new resistance of the brake pedal. Pedal actuation offers increasing resistance as they are further depressed, outputting gradually more braking power with depth. The brake pedal is quieter than on the G27 thanks to its rubber damper and – I think – offers a better overall feel with the increased resistance. 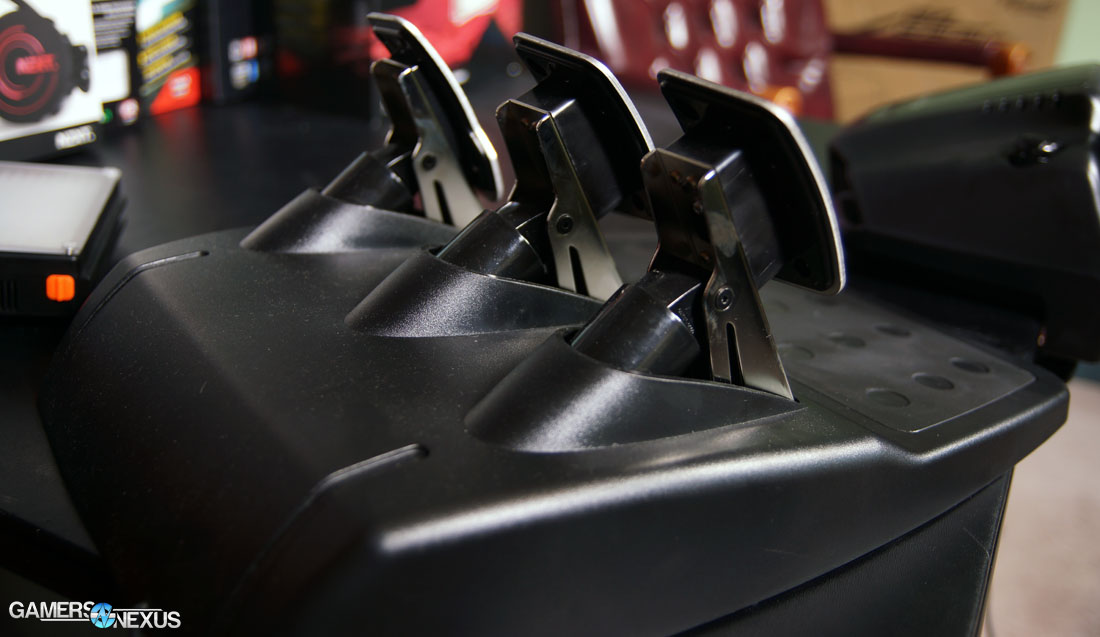 As a bit of a test, I placed one inexperienced gamer and one experienced gamer (with no wheel experience) in front of the wheel and pedals. I explained the shifting briefly, then told them to go. Both picked-up the mechanics by the third lap around the test track, which is more than can be said for their performance using traditional forms of input. This speaks to the realism of a racing wheel setup; players can take real-world experience and apply it to gaming input.

The wheel has 900 degrees of lock-to-lock rotation for about 3 full turns. I've found that one of the best tests for a racing wheel is to simulate real-life oversteer: Turn too hard into a corner, then let go of the wheel and let it spin back to position before catching it – just like the real world.

Forms of input on the G29 include, obviously, the wheel and pedals, but also a number of buttons. Project Cars hosts a default profile supporting all the buttons, but the same can't be said for every racing game (see below). Navigation through the menus is fairly easy with the d-pad and X button, though I still found myself switching to mouse/keyboard between races. 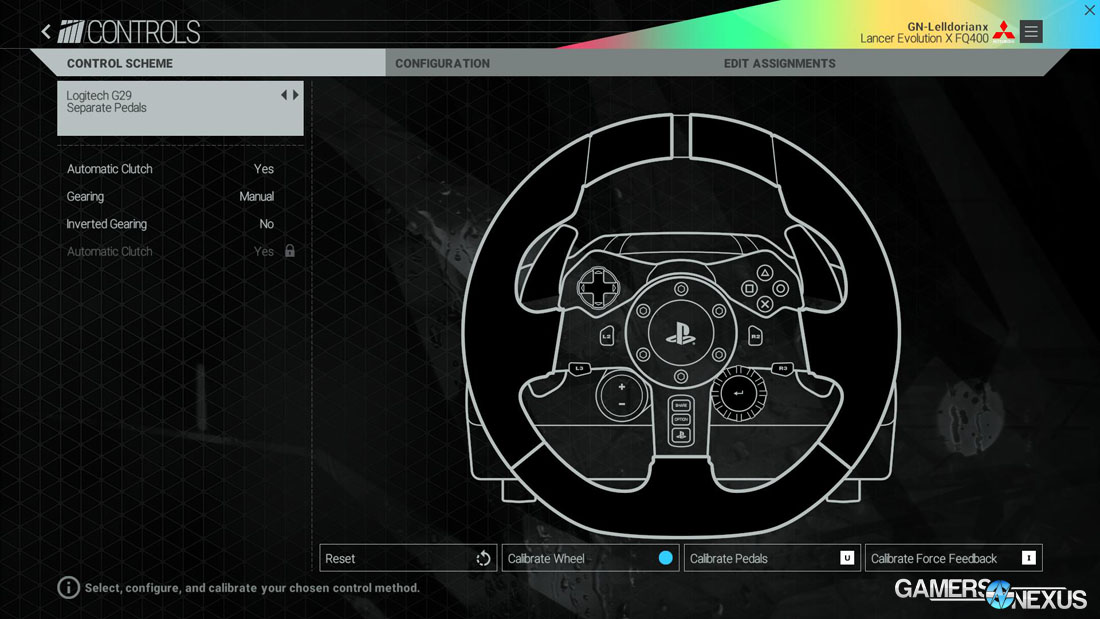 Again, Project Cars is really where it's at for Logitech's default support. The game was clearly built using in-house G29 wheels and Logitech support. There's an entire menu system devoted to racing wheels, including a built-in and fully functional G29 profile. Steering deadzones, responsiveness and power of feedback, and button configuration are all customizable.

In pCars, the wheel matches perfectly with in-game steering. Watching the player in-cockpit animations relays that there is effectively zero latency between driver input and in-game execution.

We had issues with other games, though. When attempting to play GRID: Autosport, a Codemasters game, I found that the wheel incompatibility extended beyond lacking profiling. Autosport seems to constantly detect the pedal as active, even when it is fully withdrawn. In fact, it wasn't until I pressed the gas pedal in 10% that it ceased activity in the menu system. We attempted to build a custom profile, but found calibration did not resolve the issue.

Conclusion: Undeniably High Quality, but Logitech Competes with Itself 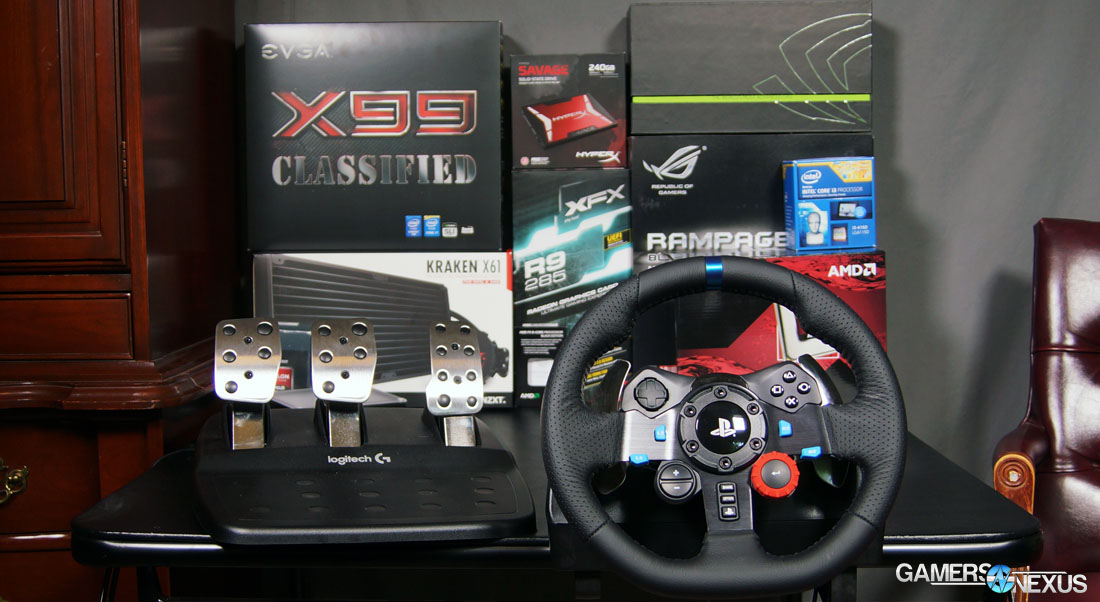 At $400, the Logitech G29 directly opposes the Thrustmaster T300, which uses newer belt-drive mechanics and has received generally favorable user reviews. As of yet, the belt-drive is untested for long-term use and endurance and has received mixed commentary.

Interestingly, the bigger threat to Logitech's G29 – for PC gamers, anyway – is its own G27. The Logitech G27 is currently priced at $240 and uses very similar mechanics with an identical geometry. It doesn't offer the hall-effect sensor or damped brake pedal, but does include a stick shifter with the purchase – something the expensive G29 and Thrustmaster units forgo. 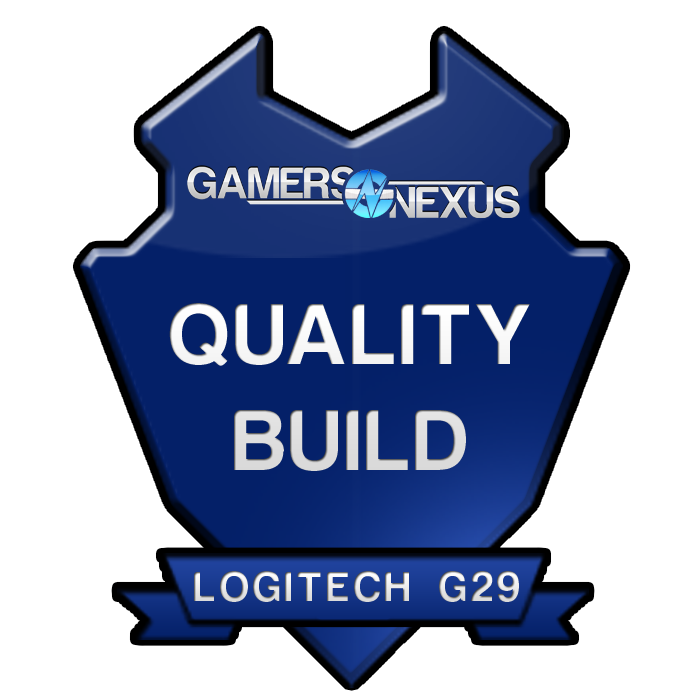 The hand-stitched leather on both the G29 and G27 offers a breathable, premium grip that conveys the feel of a car. For that, we've awarded the G29 with our "Quality Build" award. We're big fans of the G29, but feel that it is presently priced too high for PC users; the cost would feel more “right” around the $300 mark, primarily if it included the stick. It feels almost teasing to offer a clutch pedal and no shifter, and the redesigned six-speed looks like it'd be awfully fun to rip into gears, especially with the similar G27's significantly lower price. PC gamers have no real reason to upgrade (for the price) from a G27 if they already own one.

Game compatibility is still a bit tricky, but profiles are emerging from users, devs, and Logitech alike, so we don't see this being an ongoing issue.

We can confidently recommend the G29 and G27 on their performance, feel, and build quality, but would steer PC gamers toward the cheaper G27 for the time being. Regardless of which wheel is purchased, buying a mid-range or better unit is something we feel strongly about for racing sim fanatics. I've never had as much fun with racing games as with racing wheels – the G29 included.