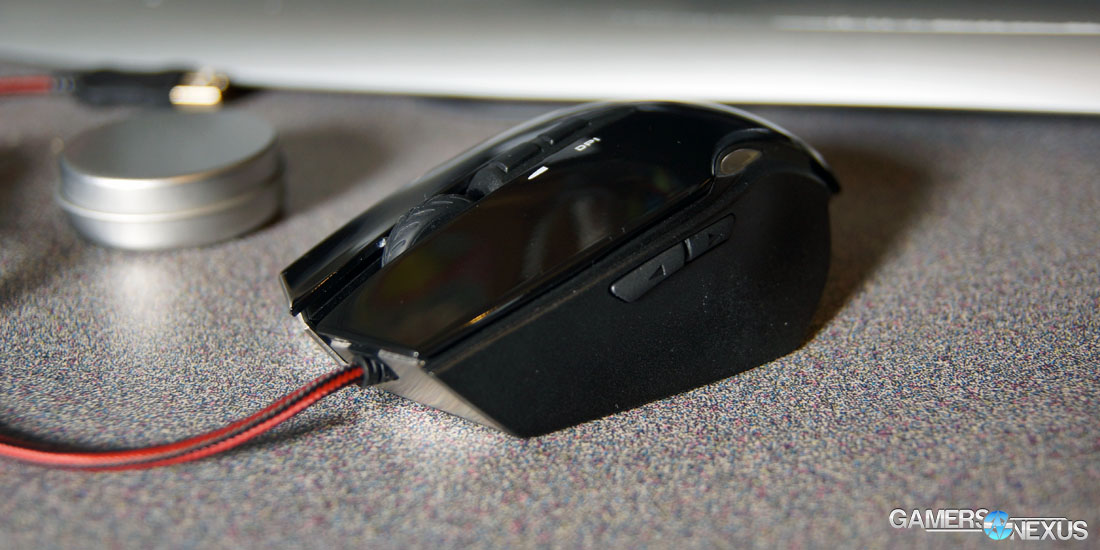 Rosewill boasts very prominently that the mouse uses two Omron switches for the left and right mouse buttons. For those who don’t know, Omron is a prominent switch maker for mice and other peripherals with simple switches; Omron has been used in almost every mouse we’ve ever reviewed and opened, and is also the manufacturer of Logitech’s Romer G keyboard switch.

While the Rosewill RGM-1100 sports two Omron switches (for which we could not locate durability ratings), it also has three other microswitches used for the mouse wheel and the side buttons. Regardless of brand, all of these switches felt clicky and had no issues executing throughout the test period. 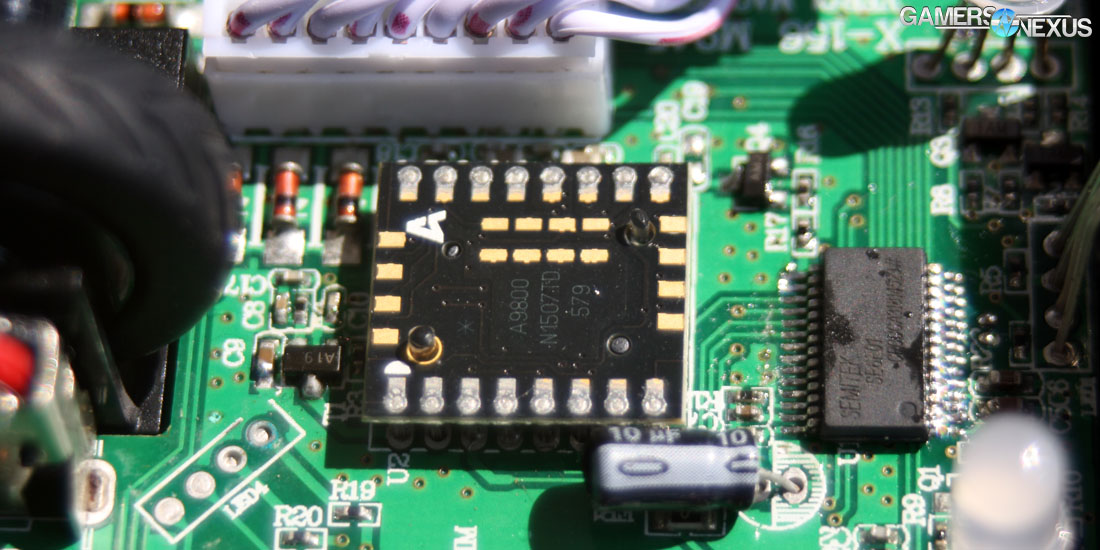 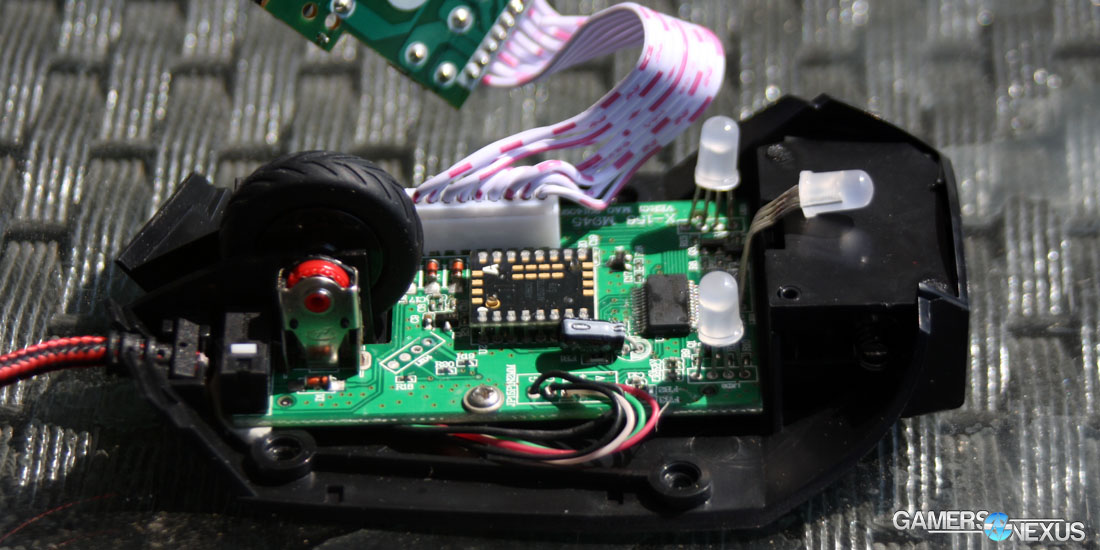 While the switch characteristics are unknown, taking apart the Rosewill RGM-1100 reveals that it uses an Avago 9800 laser sensor. The ADNS-9800 is currently one of the more common laser sensors found in mice, though has recently been usurped in high-end applications by Pixel Magic sensors (PMW). The Avago 9800 is known to have a small amount of positive mouse acceleration. Despite this, I’ve had trouble noticing any acceleration regardless of the settings applied. Unless you’re very sensitive to mouse acceleration, I highly doubt it would be noticeable or problematic for most users. The sensor supports a DPI stepping of 1600, 2800, 4800, 6800, and 8200.

The internal build quality is fine -- not stellar, but not offensive. The only curious things are the use of different brand switches for the buttons and an empty LED socket. 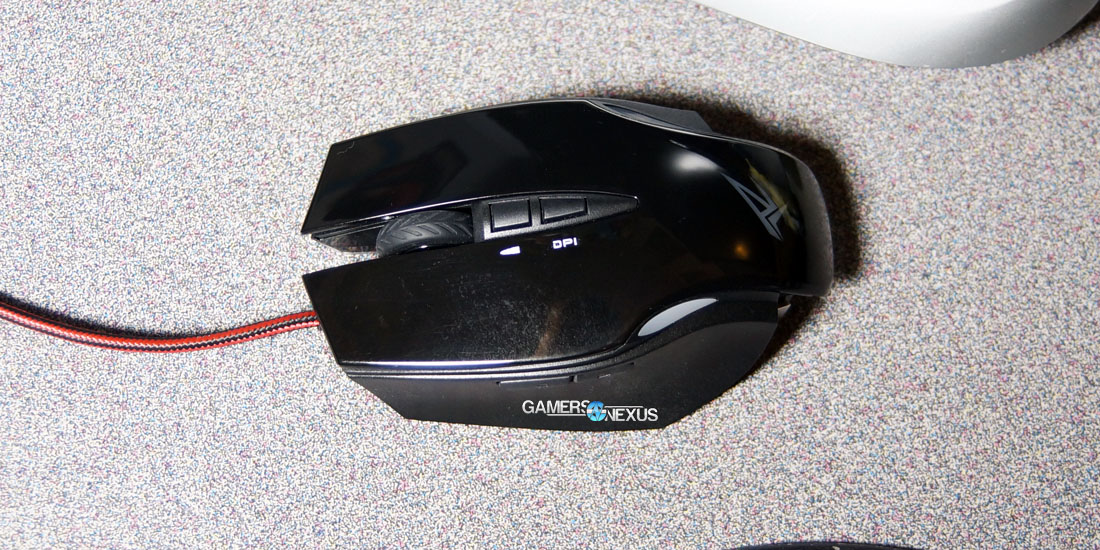 It’s fairly obvious that this is meant to be a gaming mouse. Rosewill used sharp angles, a shiny black covering, and multi-colored LEDs to appeal to the generic “gamer” bling aesthetic. While I’m more fond of plain and minimalist designs, I can still appreciate the RGM-1100. The Rosewill gamer-oriented mouse struts its angles without sacrificing comfort or function.

The Rosewill RGM-1100 does have a compartment for adding or removing weights, allowing the user to change how heavy the mouse is.

There were two primary issues in the body. In fact, both of my issues are with the shiny black top. Firstly, it’s a cheap-feeling plastic, whereas the rest of the body feels sturdier to the touch. The bigger issue to me is how easily the shiny black plastic covering shows grease and dirt. It’s pretty easy to wipe off, but just seems like an oversight for something that’s going to have hands all over it.

The Rosewill RGM-1100 is comfortably designed. I use a palm-grip and keep my fingers extended and relaxed on the buttons. This position on the Rosewill RGM-1100 works well and, while my wrist drags a little, the end-all is a fairly comfortable mouse. Functionally, I would prefer the thumb buttons to be larger so they’d be easier to press.

One of the more unique abilities of this mouse is its multi-color lighting. The Rosewill RGM-1100 is capable of producing red, green, blue, orange, pink, hot pink, purple, yellow, teal, lighter teal, peach, olive, dark blue, dark magenta, and burnt orange -- but it isn’t an RGB mouse. Regardless of color options, the lighting is vivid, bright, and well dispersed. The color of the LEDs is set via Rosewill’s RGM-1100 driver software. The LEDs can also be set to pulse at varying intensities (or told to stay steady). This is programmed into the mouse memory and is not restricted to the host platform.

I do hope that Rosewill adds the ability to pulse through the colors, but with the control of the LEDs being done on the mouse, I suspect it may not be possible.

I’m generally skeptical of the quality of software for PC gaming peripherals. Many of these companies don’t specialize in, or have much experience with, computer software, so rough edges normally emerge. Despite this, I’ve been pleasantly surprised by Rosewill’s driver software for the RGM-1100 (V1.0.0). I’ve found it to be pretty intuitive and haven’t encountered any bugs.

The macro function allows for a total of 40 macros, with each supporting up to 20 characters. Any button on the mouse can be reassigned to basic functions, like opening a page in Internet Explorer, profile switching, pasting, et cetera. Rosewill’s drivers also allow you to change the double-click speed, polling rate (which generally should be 1000Hz), and the DPI presets. The only button that can’t be reassigned is the DPI button. There are up to five profiles that can be loaded into the software at the same time for quick switching, but you can save and import profiles easily.

When setting a macro and using the recording option for the macro to simulate keypresses, it will only register the key as pressed down once when it is held down. The solution to this is to just press the key multiple times when making the macro. This is a minor issue that should be easily resolved through a software update. 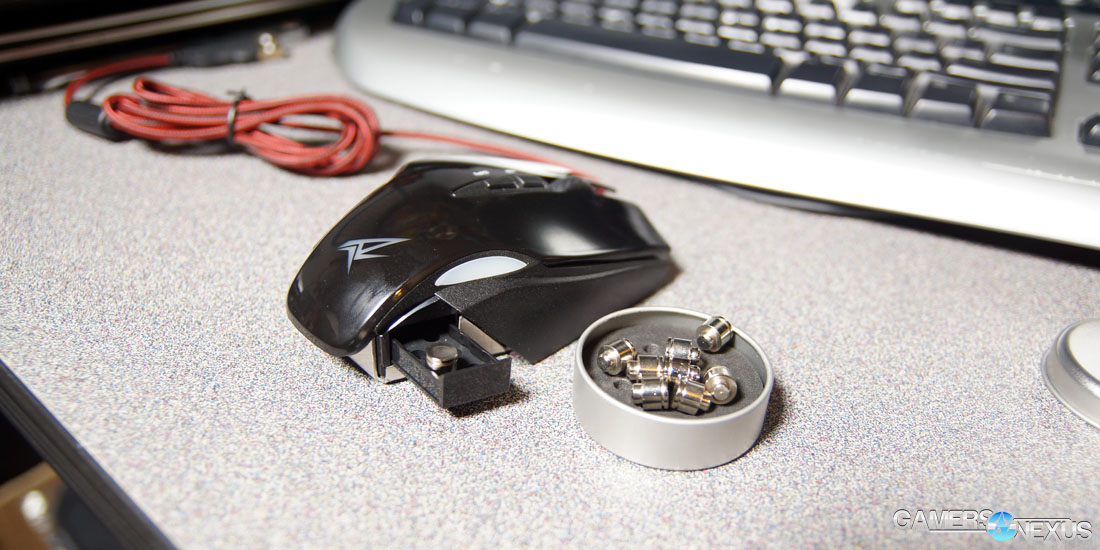 The Rosewill RGM-1100 didn’t blow my mind, but I was pleasantly surprised. It’s comfortable, works well, looks decent, and the software allows it to be sufficiently customizable. Its Avago 9800 sensor is widely used and fairly trusted, with only slight acceleration. The looks are largely up to each person’s preferences, although I wish Rosewill hadn’t used shiny black plastic for where greasy fingers may rest.

The weight system is useful for those who want to adjust weight -- go figure -- but unnecessary for my use. The downsides are all pretty minor, and some can be fixed with a software update. There’s nothing incredibly different or revolutionary about the RGM-1100; it’s just a mouse that performs, looks, and feels satisfactory. I am a bit disappointed with the one-year warranty, as we’ve seen mouse defects post-review within that span before.

All that’s left is how it stacks up against the competition. The $40 Rosewill RGM-1100 competes with the Razer Deathadder ($42) and Logitech G600 ($40) as two of its largest competitors. Both Razer and Logitech are big-name, reliable, high-endurance brands with which Rosewill must compete; that’s tough bread to slice. It really depends on what the user cares about -- if the RGM-1100 is physically appealing and goes on sale for slightly less, it’s an OK purchase. For users who want a ton of buttons, I would suggest the Logitech G600 -- basically a numpad-on-mouse -- but versatility is the main upside of the Rosewill RGM-1100, which we think is very good value at $40.