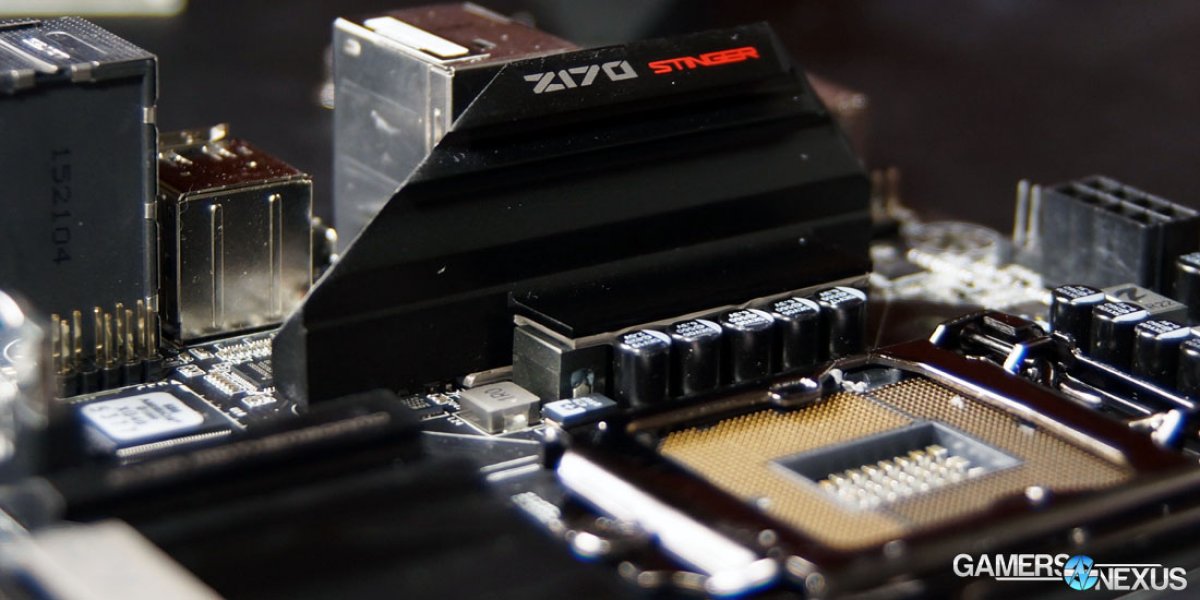 The Z170 chipset is the Stinger's brainstem. Intel's Z170 chipset makes a few key changes over Z97 (which we've written about), primary of which is is the allowance for board manufacturers to better differentiate their offerings.

Board partners can determine where Z170's PCI-e lanes are going – direct to PCI-e slots, to M.2 / storage slots, or to more USB3.x ports. The 20 PCI-e lanes are in clusters of four, making five sets of four lanes for PCI-e device mapping. Some of these lanes are pre-allocated to technologies Intel has deemed critical or non-negotiable, like RST (Rapid Storage Technology) for RAID configurations. The division of lanes means that expansion cards can be maximally powered with an x4 assignment, so multi-GPU builds will pull from the CPU's lane allotment or rely on PEX chips for multiplexing. 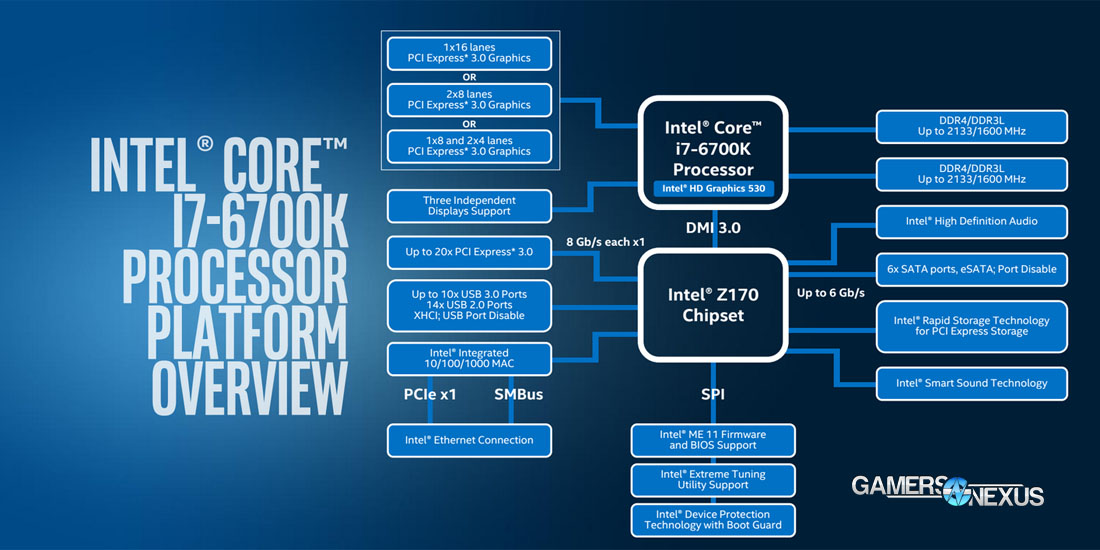 These 20 PCI-e lanes are part of Z170's 26 HSIO (high-speed IO) lanes, which the manufacturer has relative freedom to customize. SATA, M.2, USB, Gigabit Ethernet, multi-Ethernet, and other IO options are on the table for inclusion. Z170 also introduced support for digital microphone direct attach, eliminating the requirement of a separate audio codec on the board. EVGA is doing their own audio processing through a Realtek chip, but cheaper boards can now get away with even more limited components than before.

FIVR, Haswell's on-chip VRM, has been axed in Skylake and VRM control is again in the hands of the motherboard. This reduces thermal hotspots on the die and returns some of the differentiating factor to motherboards, which have slowly grown more similar over the many generations (memory controllers used to be hosted on-board, not on-chip, for instance).

EVGA's Z170 Stinger hosts a fairly simple 4-phase power design voltage regulator module. This could sound small in the shadow of Gigabyte's 22-phase Gaming G1 motherboard, but quality of phase design and CPU efficiency reign king. Skylake is known to be supremely power-efficient and will survive happily on a 4-phase VRM unless engaging in more extensive overclocking. This is something we will explore more in a future article, as we've currently only got the Stinger Z170 board and a pre-production ASRock K6, with 12 phases. The pre-production K6 is not stable enough for a head-to-head OC comparison. 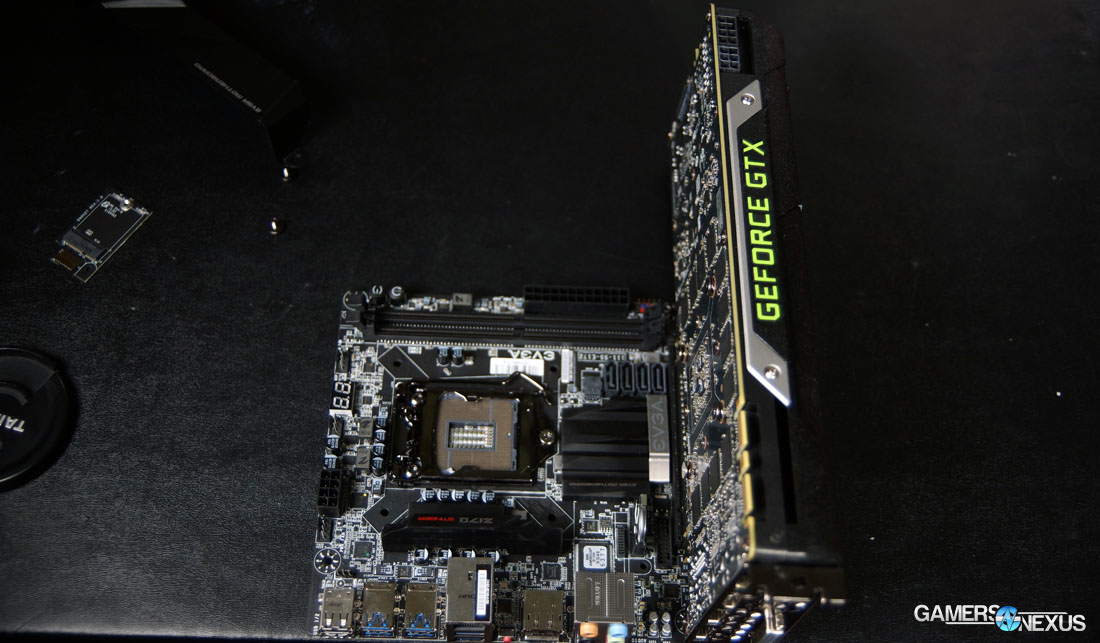 (Above: A Titan X provides perspective)

Somewhat brilliantly, EVGA uses a raised M.2 adapter card protruding vertically from the motherboard to save space. Without this solution, it would be impossible to fit the M.2 slot on the board. The riser card is optional (shown in some of our photos, absent in others) and is not pre-installed. Another optional, included item is the I/O cover, purely an aesthetic add. We don't use these in our builds, but users more interested in aesthetics would welcome the brushed covering.

Other major points include usage of a Realtek 8-channel audio controller, support for 3200MHz DDR4, and a 10-layer PCB for more ESD protection and stability with high voltages. 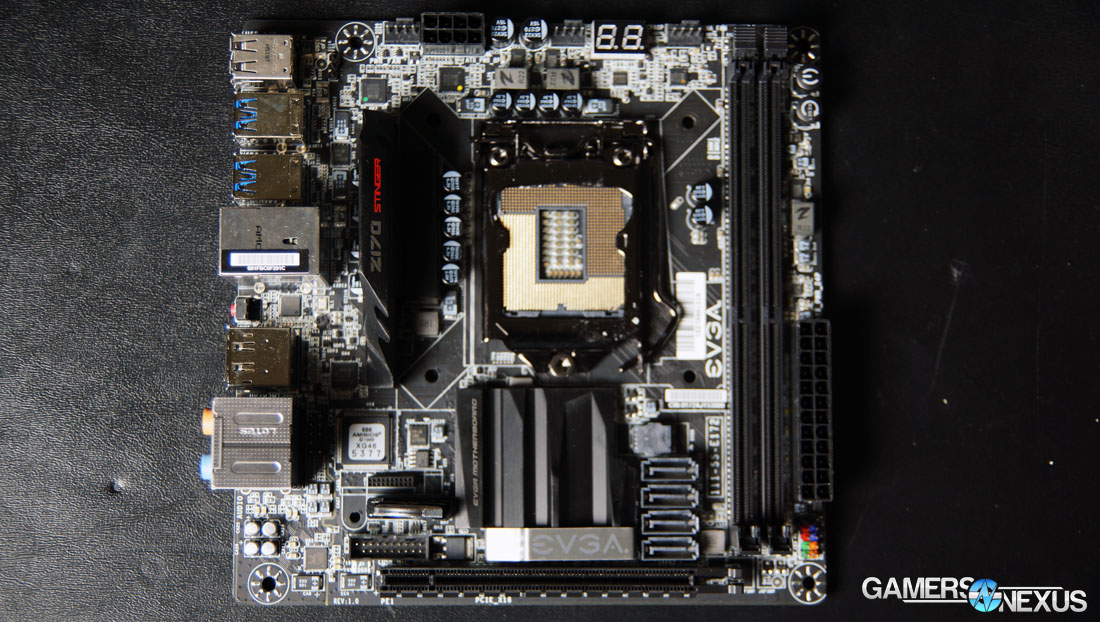 All the components are going to get pretty “friendly” in a mini-ITX form factor motherboard. The proximity of the PCI-e slot to the CPU socket is tight, measured (by us) at 50mm from the bottom-left CPU bolt to the VGA. The clearance is only as large as it is because the chipset buffers the space in between. We had about 2mm of clearance between our memory heatsink and the outer edge of the bottom-right/top-right CPU bolts.

There is effectively zero space between the CPU socket mounting points and the left VRM heatsink, but EVGA has (thankfully) made the heatsink small enough that the CPU bolts are easily accessed. This is a problem we've had with a number of motherboards. Because the VRM heatsink is shorter in length, the CPU heatsink mounting bolts are openly exposed and easy to access.

The left-side VRM heatsink measures about 31-32mm tall, making it short enough that most CPU coolers will clear the VRM sink. Check your bottom-out point to be sure.

Users would have issues mounting some larger CPU air coolers without careful selection. Memory clearance is necessary, as almost any air cooler will bleed over the DIMM slots. We had no issues whatsoever installing our generic Asetek 550LC liquid cooler. Smaller profile air coolers will still work. It is advisable to avoid purchasing a multi-fan air cooler with a large aluminum heatsink. 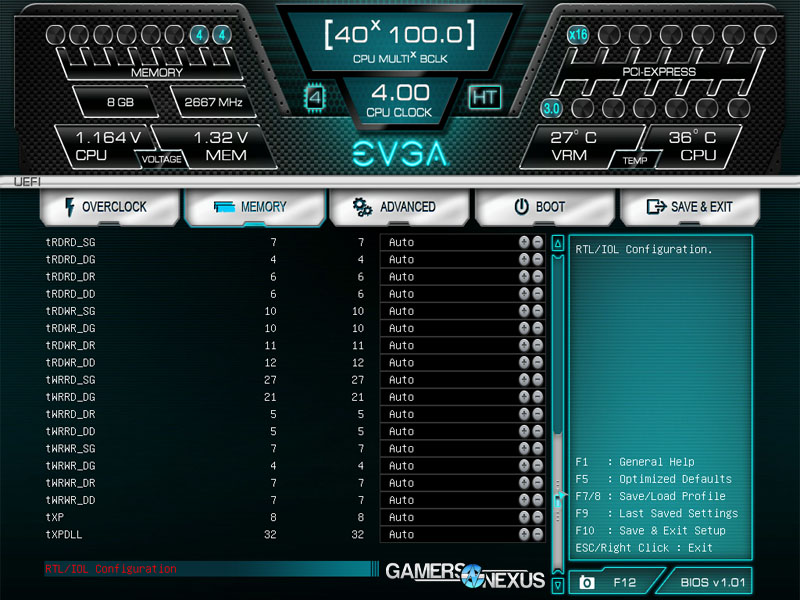 The Stinger uses a UEFI resolution of just 1024x768, something we've seen surpassed by new, HD UEFI menus on some boards. Then again, most of us at GN grew up on blue-and-white BIOS screens, so it does feel hard to complain about a 1024x768 GUI.

UEFI layout for the Stinger is fairly straight-forward. For a $200 board, the BIOS doesn't bear the resemblance of some other high-end boards on the market. In a sense, this is OK – it's easier to understand the options for less serious overclockers. Digging into some of the OC settings reveals that BIOS, despite its graphical simplicity, is fairly feature-complete. Memory timings are a testament to this, allowing deep-dives into tertiary and RTL/IOL configuration. Some CPU tweaking is absent, like finer control over the cache clock, but anyone seeking such access would do better to purchase a larger, more outfitted motherboard.

Item descriptions provide some basic insight as to what each option actually does – a good thing for usability – though we think the CPU base clock (BCLK) probably deserves a bit more 'help' text; BCLK overclocking has become relevant again in Skylake and will be a point of focus for overclockers. The EVGA Z170 Stinger's BIOS should be easy for new users to navigate and tune.

Unlike some BIOS menus, there isn't really an “easy mode” and “advanced mode” for the Z170 Stinger – it's all just there, which is fine for most people. Preferable, even. That stated, the Stinger's UEFI BIOS does lack a few options we've grown to like in other motherboards. A pop-up detailing all the XMP and JEDEC options, for instance, would be warmly welcomed (pictured above). ASRock's provided such tuning options in motherboards, even adding the ability to 'flag' timings as a note-to-self of successful endeavors. Note taking within BIOS is, in the nerdiest of senses, very cool. We'd like to see that here. Gotta save something for the high-end, I suppose. 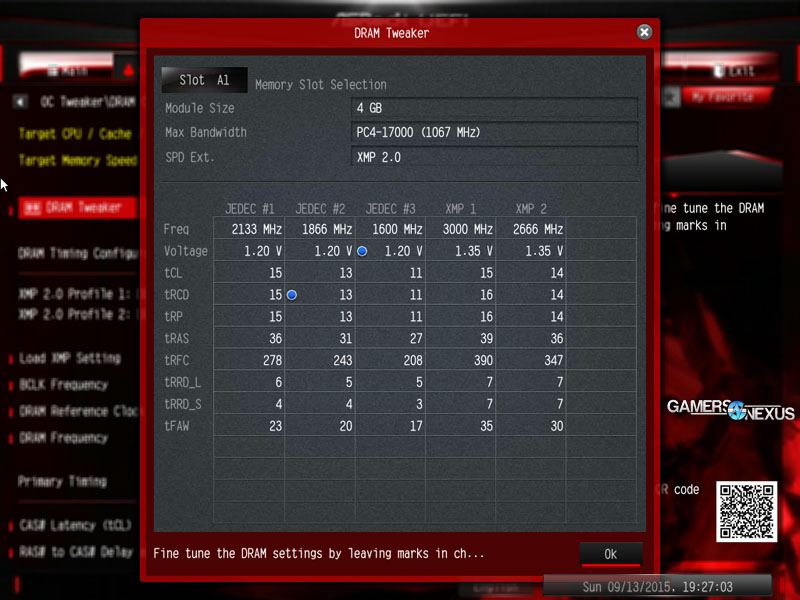 The HW Monitor includes the usual cooling and “smart” cooling options, complete with preconfigured fan curves. Three 4-pin fan headers are available on the board, including CPU_FAN.

Constructively, based on something we've observed recently in other boards, it'd be welcomed to see a “spin-up / spin-down” timer on the fan RPMs. This forces the motherboard to wait a user-defined period of time prior to altering fan RPM, ensuring that the RPM increment is actually necessary. Such an implementation would restrict the possibility of the wobbly, awkward RPM swapping as thermals find their resting place. Normally, I really wouldn't care about this – but we're looking at a mini-ITX motherboard. These types of boards end up in HTPCs that sit next to TVs, which demand absolute silence for the best home theater experience. Smoothing out the fan RPMs assists in this.

Continue to page 2 for the tests and conclusion.