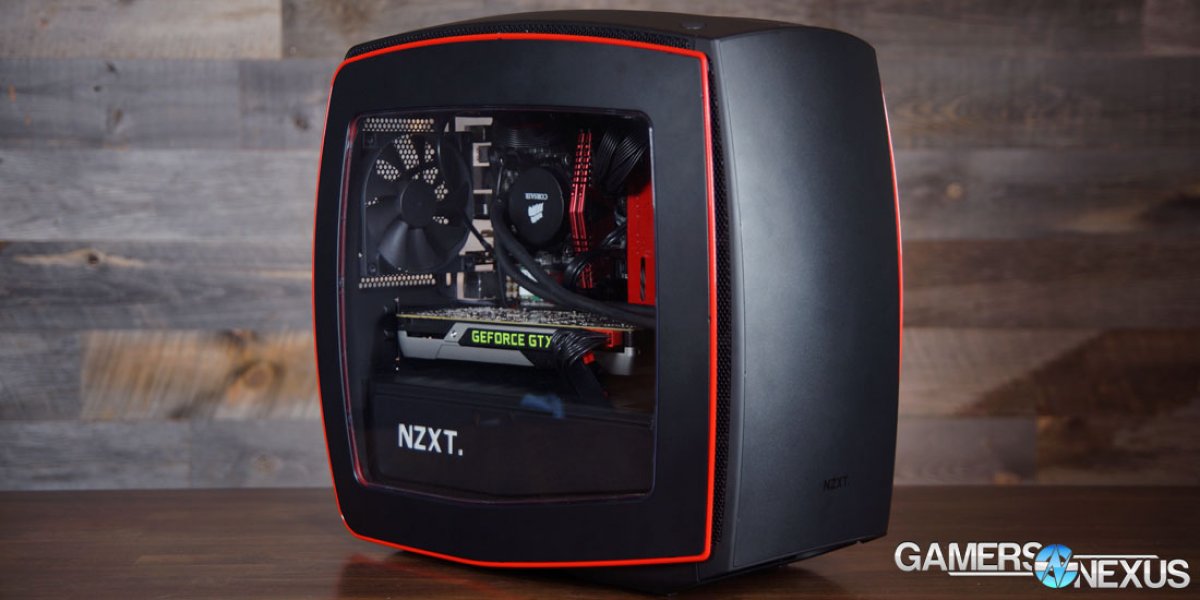 The Manta's curves are its most noticeable feature. We've looked at the case on-and-off through its two-year development life-cycle, most recently at CES, and the exterior has slowly grown on us. NZXT Case Designer Shin Feng has worked to create a fusion of “old NZXT” and “new NZXT” design aesthetics, merging the old, all-plastic look and the new, all-steel look. In this regard, NZXT sees the Manta as somewhat of a microcosm for the company's case design history.

But, as our regulars know, subjective matters aren't where we focus – the photos and video will tell that story. We're more interested in the build quality and cooling performance.

The case is almost entirely made of steel, with a few plastic inlays supporting the hardened shell – and it is very much like a turtle shell: Sturdy, surprisingly heavy for the form factor, and inflexible. To our knowledge, this is the first time that curved, stamped, steel paneling has been used in a DIY PC case. Not that being first to curve a panel is particularly impressive; it's just uncommon and a bit of a risk. That willingness to take risks is what drove NZXT to remove optical drives from its H440, though, and that's one of the best-selling enthusiast cases in recent years.

Looking inside the outward-bowed window, we see an interior that resembles a shrunken version of the S340. It's got the PSU shroud, cable management bar, and cleared front for airflow and minimalism. The SSD sleds have been moved off of the PSU shroud and immediately east of the cable management bar, a move that damages the case's ease-of-installation as much as it benefits it. We'll talk about that in the next section. 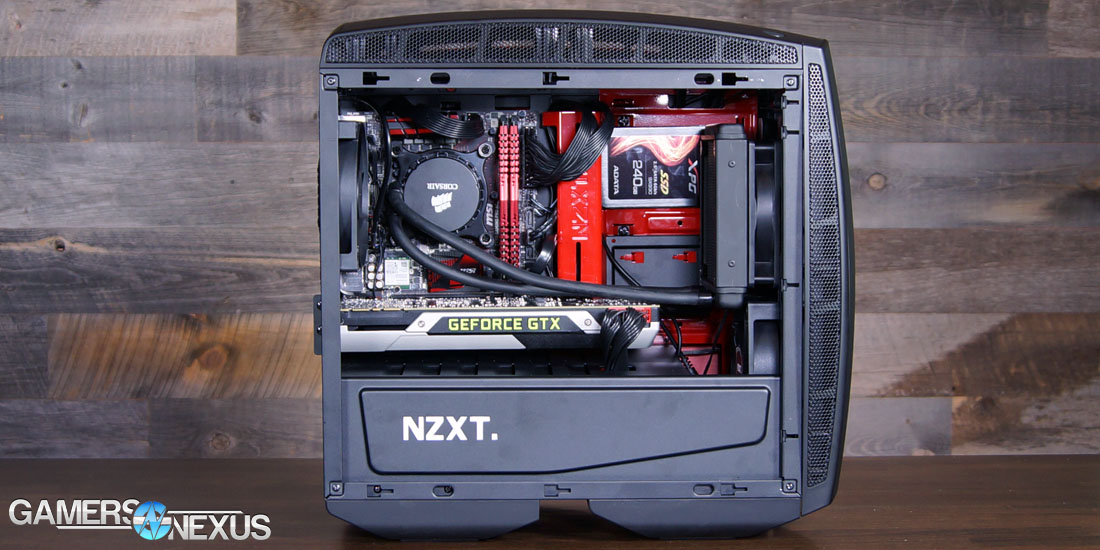 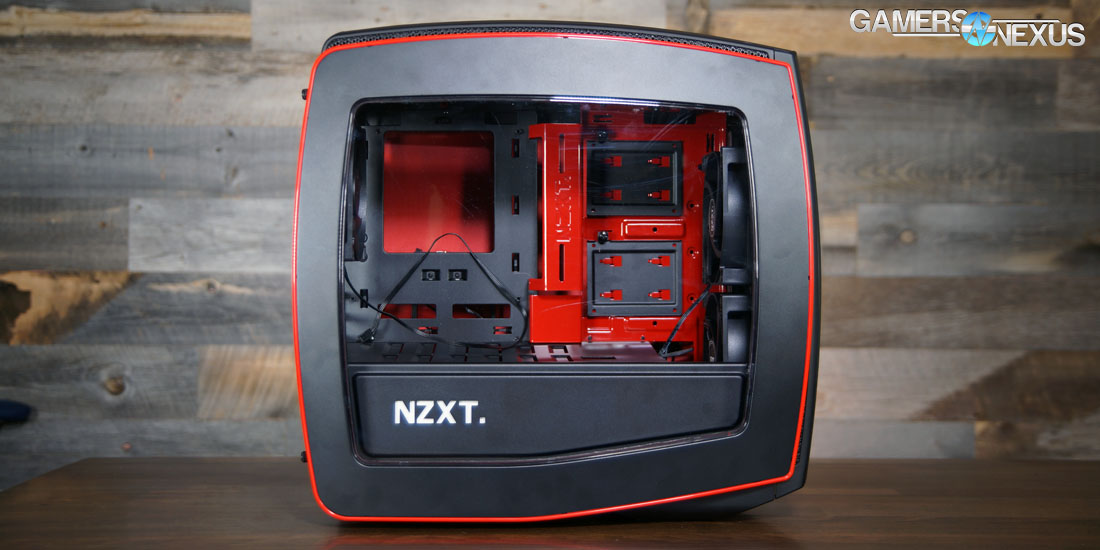 Cable management cut-outs exist in all the usual places. The only location of note is the cut-out in the PSU shroud, which allows straight-shot PCI-e wiring to the GPU. Two EPS 12V CPU power cut-outs are present, helping further in direct-path wiring. As with the S340, a cable management bar is used for concealment and routing of 24-pin, SATA, and other system headers.

Stock cooling includes 2x 120mm front intake fans – which breathe through bubbled-out meshing on the sides of the front panel (and the underside) – and 1x 120mm rear exhaust fan. Options for 2x 140mm/120mm top fans are present. Radiator support is available for up to 2x 280mm radiators (top/front) and 1x 120mm rear radiator.

A CPU cooler height clearance of 160mm, achievable with thanks to the bowed-out side panel, means most air coolers will fit. T40 units from multiple manufacturers often fall within this height, as do SilverStone's new air coolers.

Because the Manta takes the existing mid-tower form factor and shrinks it, installation is identical to what you'd experience with any other shroud-equipped case. The PSU mounts in a separate compartment, as is the new trend in cases, at which point the cables are routed along a concealing cable management bar. The panels are exceedingly easy to remove and, unlike some other cases we've worked with lately, don't send plastic shards flying immediately upon unclipping the paneling.

GPU configurations are naturally limited to single-GPU setups, since mini-ITX cases don't even offer multiple PCIe slots, anyway. The card is pressed right up against the PSU shroud, a fact that will benefit some cooler designs more than others (large push fans would work well).

We tested using our new mITX test bench, detailed in the table below. We’ve moved from a one-bench-fits-all setup (which uses a Haswell config in an mATX board) to multiple benches, one for mATX and small towers, one for ATX / mid-towers, and one for mini-ITX cases. This bench is for the mini-ITX enclosures.

Conducting thermal tests requires careful measurement of temperatures in the surrounding environment. We control for ambient – which is set to a constant 21C – and then produce charts using a Delta T(emperature) over Ambient value. A laser is used to log the host table's temperature. Thermistors are used to measure true ambient at the intake location. Delta T over Ambient subtracts ambient room temperature from the measured output, producing a delta report of thermals. AIDA64 is used for logging thermals of silicon components, including the GPU diode, CPU package, and PCH.

All case fans are manually configured to their maximum throughput using BIOS. If a fan controller is present, we opt-in and test on multiple settings. This forces testing of case fan performance in addition to the case's air channeling and air-stream design. This also ensures minimal variance when testing, as automatically controlled fan speeds can reduce reliability of benchmarking. The CPU fan is set to use a custom fan curve that was devised in-house after a series of testing; setting the CPU fan to its maximum speed can limit the disparity shown from case-to-case as the CPU cooler is extremely efficient, and will create a ceiling for thermal performance if bottlenecked.

Additional thermal testing was conducted for the NZXT Manta case – something we're continuing going forward (the 400C is next) – for determining the best possible fan configuration. The following matrix was engineered for positional testing of radiators and case fans in the Manta.

Our objective was to figure out the optimal number and orientation of case fans in the Manta. We tested radiator location (rear-mount vs. front-mount), intake vs. exhaust configurations in the top fan slots, and even tested height adjustment for the front fans. We'll discuss that more later. Another objective of testing was to determine the ideal CPU radiator mounting position when considering GPU thermals. A radiator as front intake will obviously push heat into the case, for which we perform comparative analysis of CPU thermal reduction against GPU thermal increase. Finally, we aim to locate the best possible location to add one extra fan; in other words, if you were to purchase one fan for the case, we figure out where it'd best fit.

Our approach to methodology is underscored by one point: If we can’t do it consistently and confidently, we don’t do it at all. For noise, we aren’t yet confident in a reliable methodology given our setup, so we don’t test noise. Subjectively, we can state that the NZXT Manta enclosure is noticeably quieter than some of its more mesh-laden competitors, resultant of a reliance upon thick steel paneling and limited mesh placement.

Continue to the next (and final) page for thermal benchmark charts and optimal fan configuration analysis.