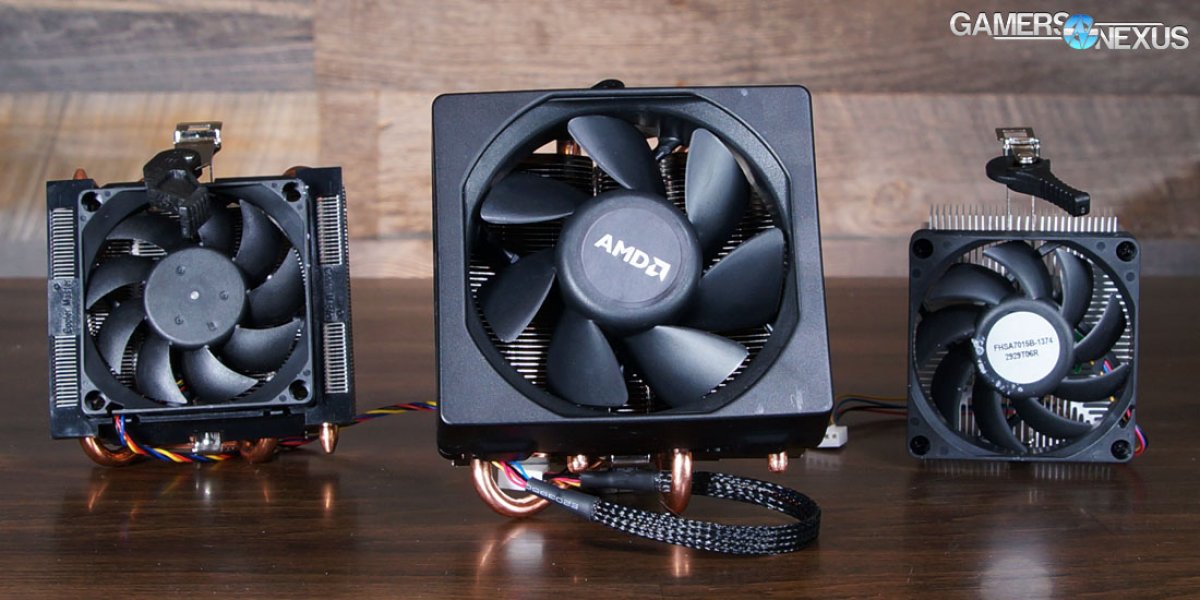 AMD's new “Wraith” CPU cooler makes a few engineering changes: Overall surface area of the aluminum heatsink has increased 24%, the fan has been heavily modified from the previous stock cooler (which should be named the “banshee,” given its shrill output), and it's got an LED. We first got eyes-on with the Wraith at CES 2016, but have returned today with in-house validation of CPU cooler performance.

Today marks the list date of AMD's new Wraith CPU cooler, which will accompany “specially marked” processors for no added cost, we're told. The Wraith replaces AMD's old stock cooler, pictured in this article, though both products will remain shipping. The FX-8370 units with the old cooler will sell for a new, dropped price. MSRP stands at $200 for the FX-8370 Wraith Edition, as we're calling it, bumping the non-Wraith FX-8370 down to $190. That's a $10 difference for the denser cooler with LED back-light – now just to determine whether the $10 is worthwhile.

This review benchmarks AMD's Wraith CPU cooler vs. the original stock AMD CPU cooler, then throws-in an aftermarket air cooler for comparison. We modulate fan RPMs between the two AMD coolers to get a feel for overall efficiency and noise-thermal trade-offs. 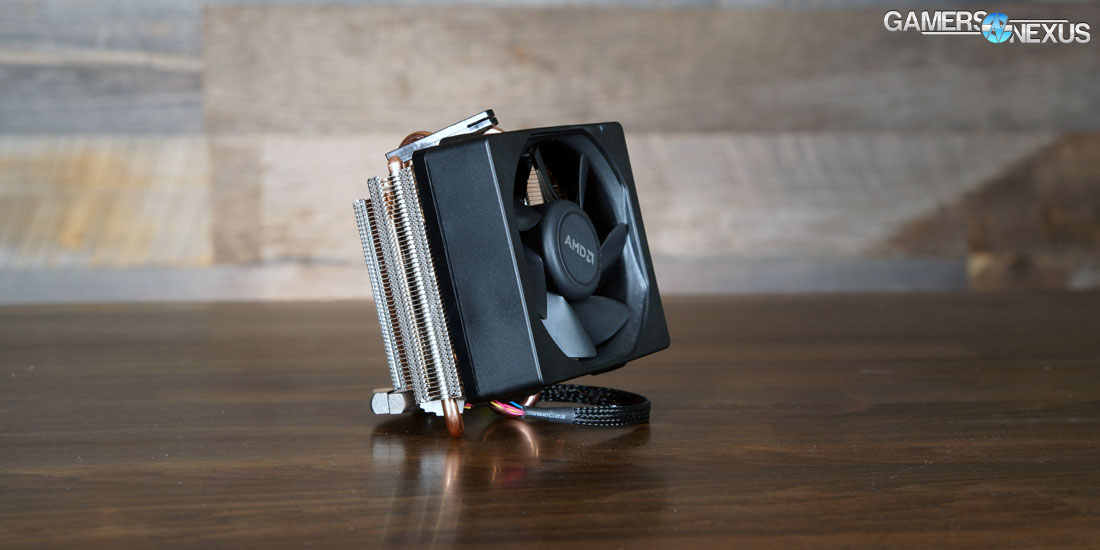 We tested using the below, temporary test bench. The bench was assembled strictly for the purpose of testing the new Wraith cooler.

Conducting thermal tests requires careful measurement of temperatures in the surrounding environment. We control for ambient – which is set to a constant 21C – and then produce charts using a Delta T(emperature) over Ambient value. A laser is used to log the host table's temperature. Thermistors / thermocouples are used to measure true ambient at the point of intake, feeding into a digital thermometer, logged, and matched against internal CPU diode logging (AIDA64). Delta T over Ambient subtracts ambient room temperature from the measured CPU heat output, producing a delta report of thermals. AIDA64 is used for logging thermals of silicon components, including the GPU diode, CPU package, and PCH. Fan speeds are logged and mapped against thermals for accuracy and consistency checks prior to publication. We measure to two significant figures, average a fixed selection of data, and then round the average to three significant figures. Thermal-over-time charts do not show averaged temperatures, only delta values against time (s).

All case fans are manually configured to their maximum throughput using BIOS. The CPU fan is configured to its maximum speed for predictable, reproduceable testing. Some specific instances may have reduced or manually controlled CPU fan RPM, in which case such cases will be notated in the charts. This also ensures minimal variance when testing, as automatically controlled fan speeds can reduce reliability of benchmarking.

Prior to load testing, we collect idle temperature results for ten minutes to determine the unloaded cooling performance of a CPU cooler. Thermal benchmarking is conducted for twenty minutes, a period we've determined sufficient for achieving equilibrium. The over-time data is aggregated and will occasionally be compiled into charts, if interesting or relevant. The equilibrium performance is averaged to create the below charts.

Note: No Objective dBA Analysis At This Time, but…

We're still not measuring dBA output in an objective, official capacity. For the time being, we're investing most heavily in thermal methodology and equipment, and have begun internal research and validation of dBA testing equipment.

We can subjectively state that the Wraith is significantly quieter than the old stock cooler, both running at full RPMs, and potentially makes the Wraith worthwhile alone. Locking the old cooler to a comparable RPM to the Wraith, there's still a noise disparity – though much less obnoxious, as case and GPU fans begin to obfuscate the origin of noise emissions. Until that point, though, the shrill whine of the old, high-speed stock cooler is nigh-unbearable.

Below is a chart showing averaged peak thermals. 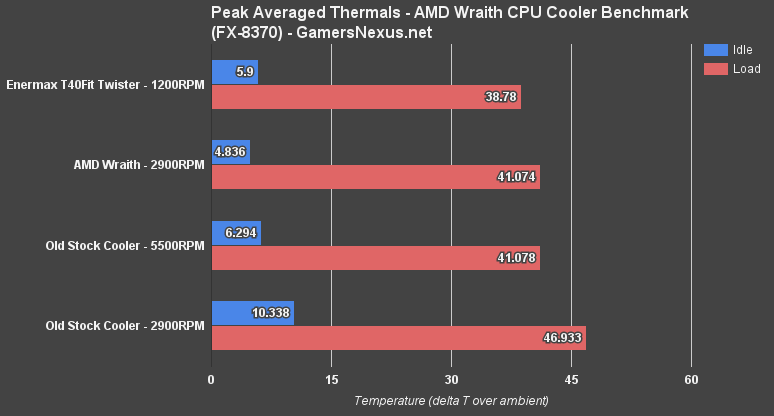 The equilibrium measurement reveals a performance improvement of approximately 14.26% (% change) over the same-RPM, old stock cooler. With identical RPMs, the performance is imperceptibly similar – 41.074C (Wraith) vs. 41.078C (Old Cooler). Considering the fan speed is nearly two-fold on the older cooler, the performance similarities are profound and ensure a more reasonable, not-ulcer-inducing noise level while retaining identical thermals. Dropping the fan RPM for a more comparable benchmark, the ~14.3% gap begin to show some real-world differences in temperatures (41.074C vs. 46.933C).

Idle is also noteworthy. The idle temperature of the stock coolers is kept under control by way of forcing high-volume airflow directly onto the CPU. The Wraith lands at 4.836C, the old cooler at 6.294C (~5500RPM) or 10.338C (~2900RPM). Even with the high RPM throughput, the old cooler is outperformed by the Wraith by a minimum of ~1.5C. We hypothesize that this is resultant of AMD's fin density and surface area growth on the heatsink.

The ~$39 Enermax T40Fit Twister, with a comparably silent 140mm, runs unsurprisingly cooler than the stock options. We included a nearby stock air cooler for comparative representation of what an extra $20-$30 gets you, should the Wraith be a consideration. The performance differential on this particular processor and between these particular coolers yields a ~5.7% difference between the Wraith and T40Fit. Not huge for the price, though noise levels are further reduced (subjectively).

The below chart represents a cross-section of thermal data. This shows thermals-over-time from the first ten minutes of our extended test (showing more would reduce the nuances in the first few minutes, when ramp-up time shows some interesting data).

The tests all start at the same time, but the old stock cooler (2900RPM) has a significantly warmer starting point (~10C dT over ambient). 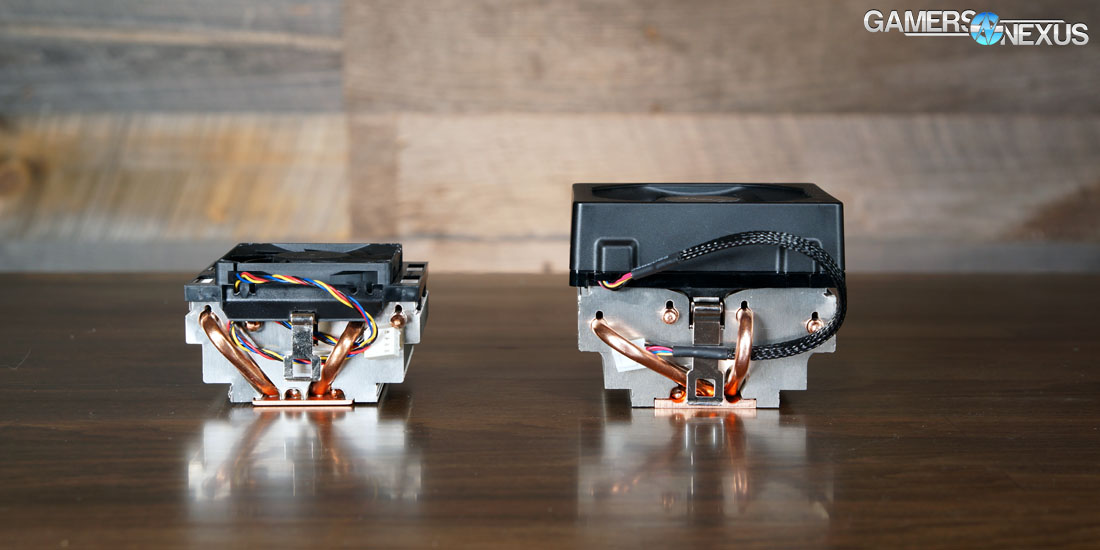 Rev-for-rev, the Wraith stands superior over its championed predecessor; though maxing the revs on the old cooler does equalize thermals between the two, the noise increase (on the old cooler) is vehemently unbearable. This renders the 5500RPM tests unrepresentative of a real-world use case, short of building your system within an anechoic bomb shelter.

None of this is to discuss the topic of buying an FX processor and AM3+ platform at this time, of course, and contains no game or non-cooling performance benchmarks. We don't think you should necessarily buy either right now. If you intend to buy AMD, Zen is a worthwhile wait-and-see game to play; AM3+ is five years old now, built atop even older architecture, and it's beginning to show age.

But, strictly from a cooler standpoint, the Wraith is a major improvement and one that should hopefully be carried into the next gen. Not everyone buys an aftermarket cooler – especially at the ultra-budget range, a market segment AMD has historically fought for – and that's where something like this can come into play. AMD just needs to make sure it doesn't raise the price for a stock cooler. The Wraith works this time because the 8370 is remaining the same price (though the B-stock, with the old coolers, will drop $10); if there's a two-model-per-CPU approach in the future, AMD will confuse its buyers and create competition with itself in a way that seems unnecessary.

The Wraith should become available today. Make sure you find product listings which explicitly name the Wraith as accompanying the FX-8370 (or other relevant SKUs), as retailers will still be selling the 'old' stock.