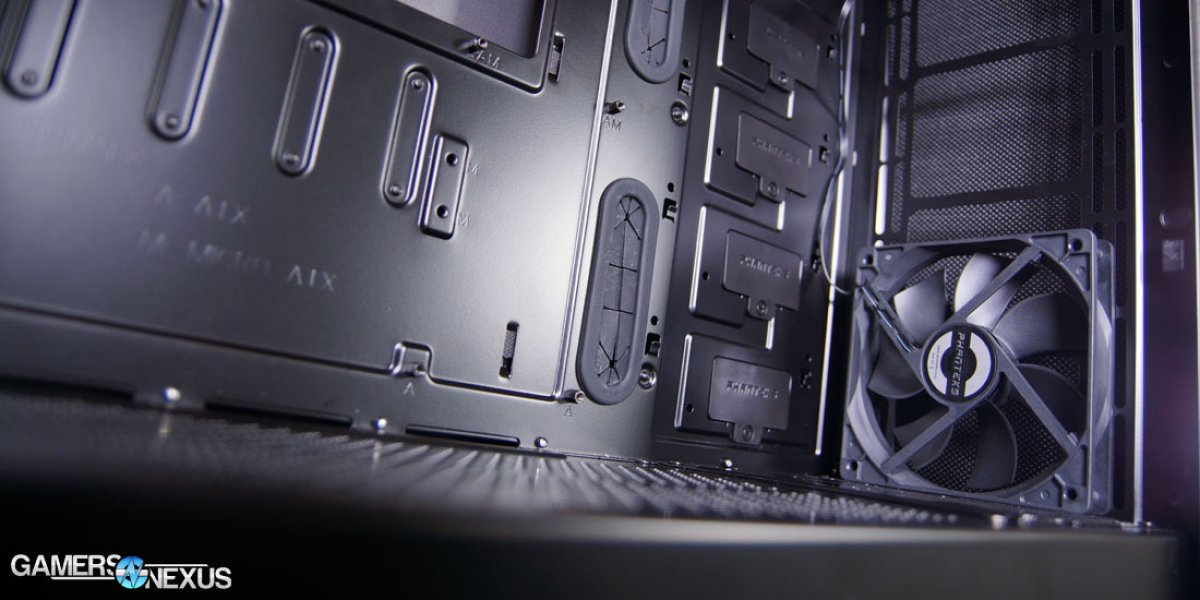 The whole model screams “DLC,” where every little thing costs extra – flashbacks to Horse Armor abound: “Back in my day, the extras were included with the case! And if we didn't want it, we didn't use it!” 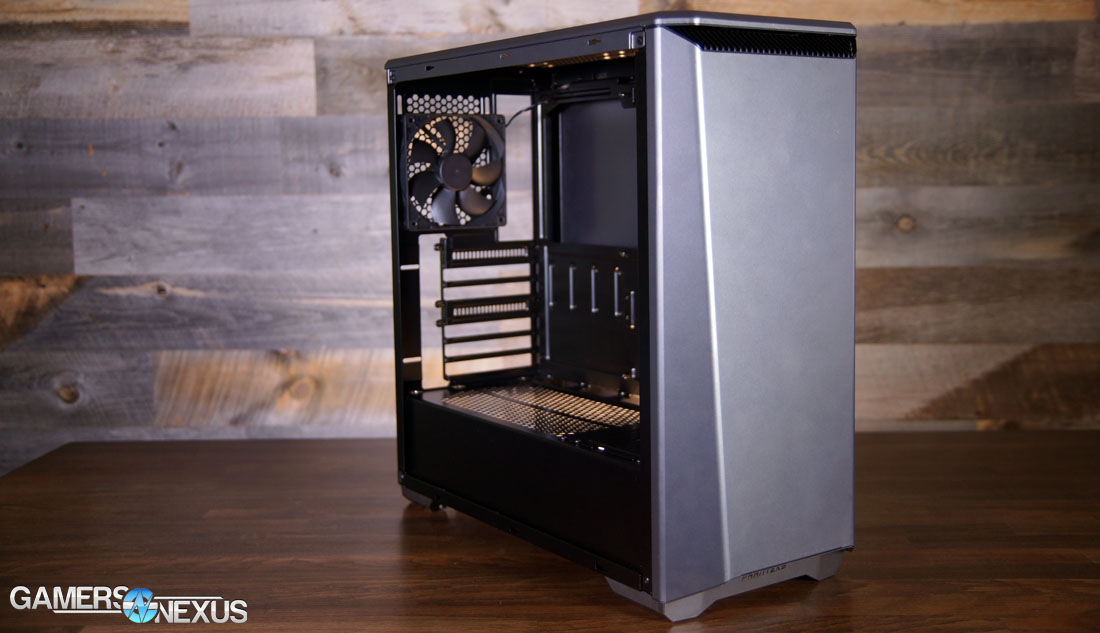 But if Phanteks is trying to come into market at a lower cost than its competitors, there's not anything inherently wrong with parting-out the case to do so. Except for information conveyance among newer builders, but that's more of a marketing problem.

We reviewed the P400 enclosure, as we're more interested in thermals than noise. Our testing compares the P400 vs. the NZXT S340 (review), Corsair 400C (review), Rosewill Gungnir (announcement), and more. 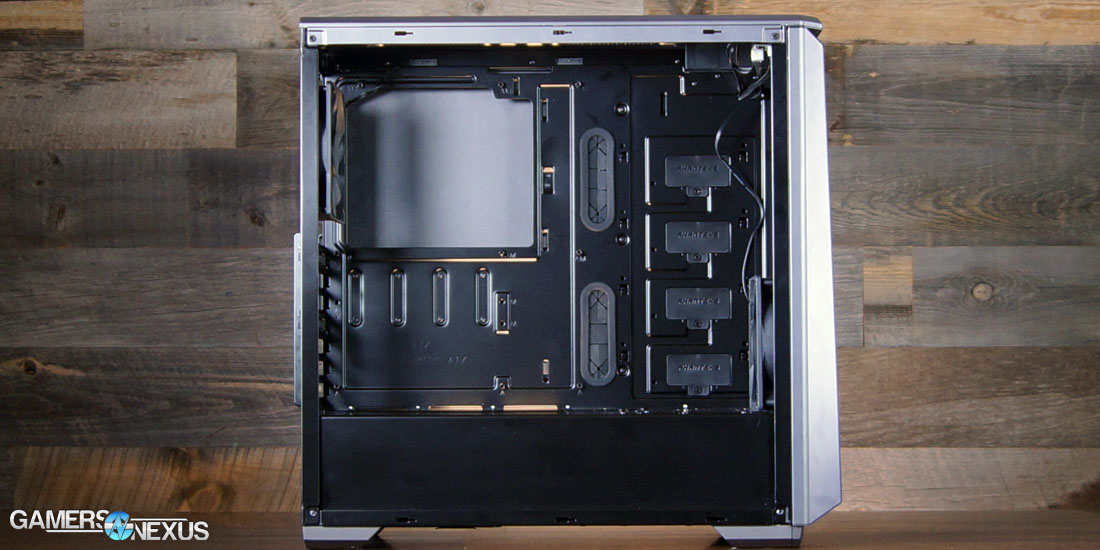 The Eclipse P400 and P400S share identical tooling, chassis, and external paneling (sans left side window in P400S). Externally, a plastic faceplate uses chamfered edges to create a pronounced effect, furthered by the inclusion of 10-color RGB underglow. The effect is vaguely similar to 'neons' on an import car – there's some inherent edginess with the front panel, but not too much, and a fixed color output under the front panel.

The same area with the lighting is where our intake lives. Because the panel is fully plastic and affords absolutely zero airflow to the system, a tiny cut-out on the underside of the front panel allows some limited air intake. This also explains why the only included intake fan is positioned toward the bottom of the front panel – despite how little sense this would normally make, since the act would generally restrict CPU intake access – as a top-mounted fan would have to fight harder for a supply of air. As you'll see in our testing, we decided to test the Phanteks P400 with and without its front panel, providing a better look at just how restrictive a solid front panel (with no side grilling, mind you) can be.

Under the top panel (front-side) rests a reset and LED cycle button, the latter of which switches between static light colors (10 available). 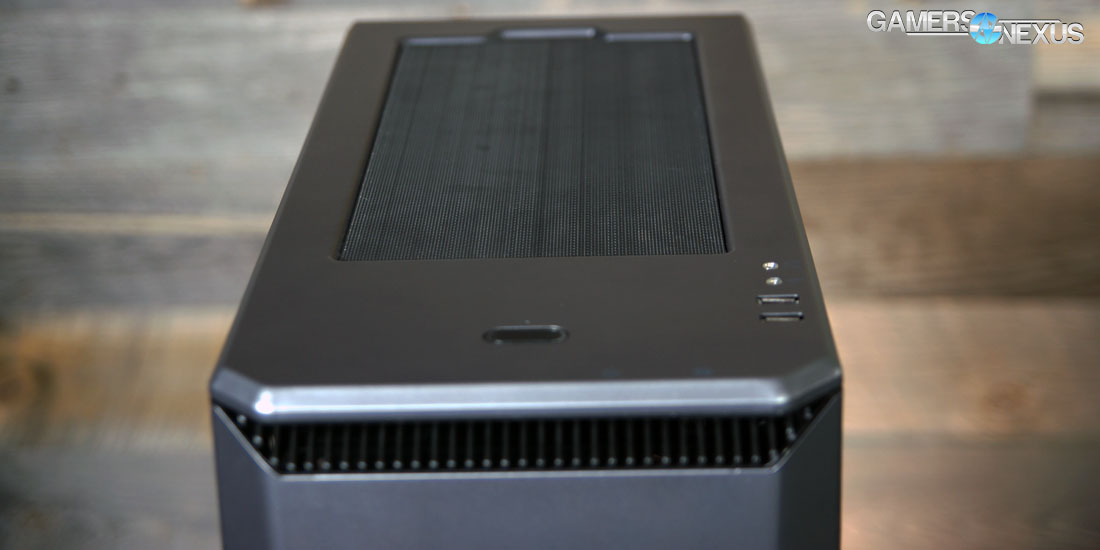 Removing the left side panel reveals the system internals. Similar to seemingly every other mid-tower launching this year, the P400 runs a PSU shroud bottom-side, a cut-out for larger front radiators, and no stock HDD or ODD support. The secret, as with the 400C, S340, and Gungnir, is that the HDDs are hosted under the PSU shroud (front-side), with SSD sleds hanging from the rear of the motherboard tray. Additional HDD cages can be added to the main compartment of the P400 for an extra cost. The removal of ODD bays is a move with which we strongly agree.

The PSU shroud dons a simple, steel shape with a somewhat “industrial” look; no back-lighting, no carved edges or logo emblems – just a functional, steel shroud. The top of the PSU shroud is riddled with holes which, aren't wholly useful (the PSU fan should face down) and are a little unsightly. This trend is continued with the prevalence of a few lone screws jutting-up from the right-side of the PSU shroud. They're used to hold the concealed HDD cages into place, but could have been done in a significantly cleaner fashion without looking like an attempt to get the thing out the door; rivets or a better mounting mechanism would eliminate the need for top-side screws and clean-up the P400's aesthetics measurably.

Phanteks also overlooks the usefulness of cable routing through the PSU shroud. We knocked Corsair's 600C for this very same oversight, and were pleased to find that the 400C had a more thoughtful management pathway. Without a cut-out in the shroud for cable routing, PCI-e cables have to be run through cut-outs elsewhere. Note also that top-mounted radiators will severely limit the clearance for 8-pin EPS 12V connectors in the top of the enclosure, and will force some compromises – like routing the cable under the VGA – in the event of a radiator or top-fan install. This varies slightly based upon motherboard. Low-profile memory should also be used when taking this approach.

But not all of the P400's design is shortsighted on cabling. Velcro ties on the rear-side of the case make for trivial, re-usable cable management, and stand as a feature we hope spreads to other enclosures. This is one of the P400's few unique features, along with its 10-color underglow, and helps control for cabling limitations elsewhere in the enclosure.