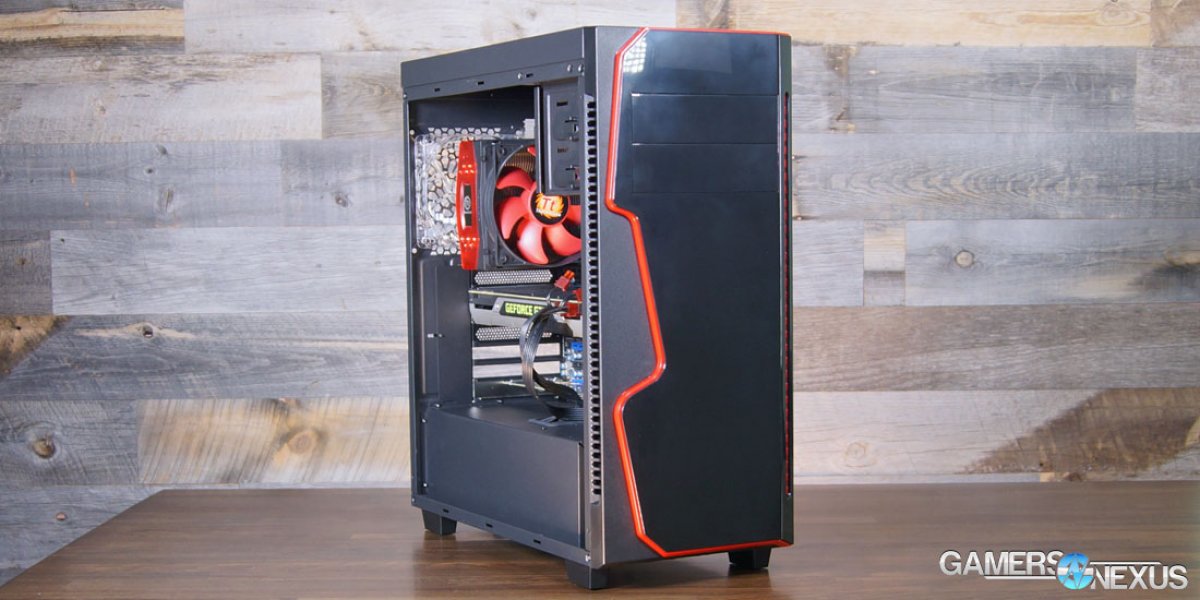 The Gungnir case slots itself into the more affordable range of the mid-tower market, but ships with three total fans (most of its competition ship with two fans – we'll talk about these decisions in the thermals section). This has long been a marketing point for Rosewill: where competition has one fan, they'll do two; where competition has two, they'll do three. That's not necessarily a bad thing and the brute-force approach to cooling does often work (strictly thermally) in Rosewill's favor, so it's no surprise to see a repeat of the tactic. Perhaps not the best answer, but one that looks good on spec sheets.

Rosewill has also recently begun using radiator sizes as additional support of its thermals marketing argument, promoting options up to 280mm in the new Gungnir. It's all somewhat stifled by the limited airflow afforded by the case's front panel, of course, but that's the current trend in the Gungnir's market segment. 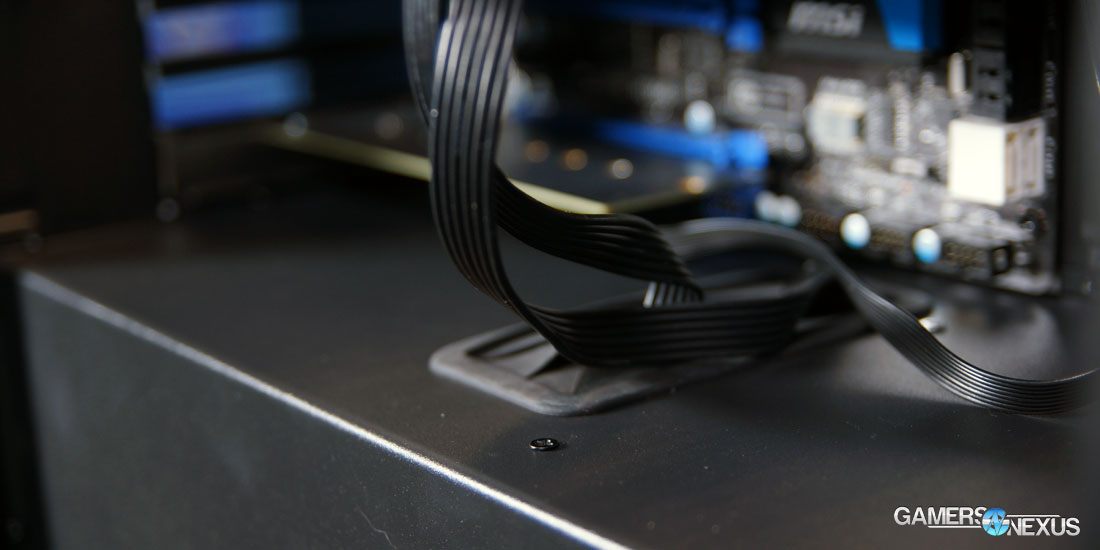 The new enclosure mostly prides itself on the PSU shroud – another current trend – which extends 80% the way across the case (the remaining space is reserved for fans and radiators). Rosewill's met partway between the “new” mid-towers and “traditional” cases, axing hard drive cages from the main compartment, but retaining 5.25” drive bays. The HDD cages have been moved inside of the PSU compartment, cramping installation space in favor of more discretion. The overlooked aspect here, though, is that the discretion is normally desired for a fuller side window or cleaner overall build; by planting 5.25” bays in the case, Rosewill really may as well just throw the 3.5” cages in there, too. The only real benefit from the isolated HDD cages is “unlimited” VGA length, but nothing would run into cages, anyway. At least, not anything within reason that an owner of a $65 case would buy.

This becomes somewhat of a trend for the Gungnir – it's as if Rosewill's trying to produce the answer that the market wants, but is doing so without understanding why that answer is wanted. This approach overlooks the details of the “why” for each design element – like why HDD cages are being eliminated from main compartments (cleanliness – something forfeited by inclusion of 5.25” cages). Or why PSU shrouds are being used (better cable management – see below). 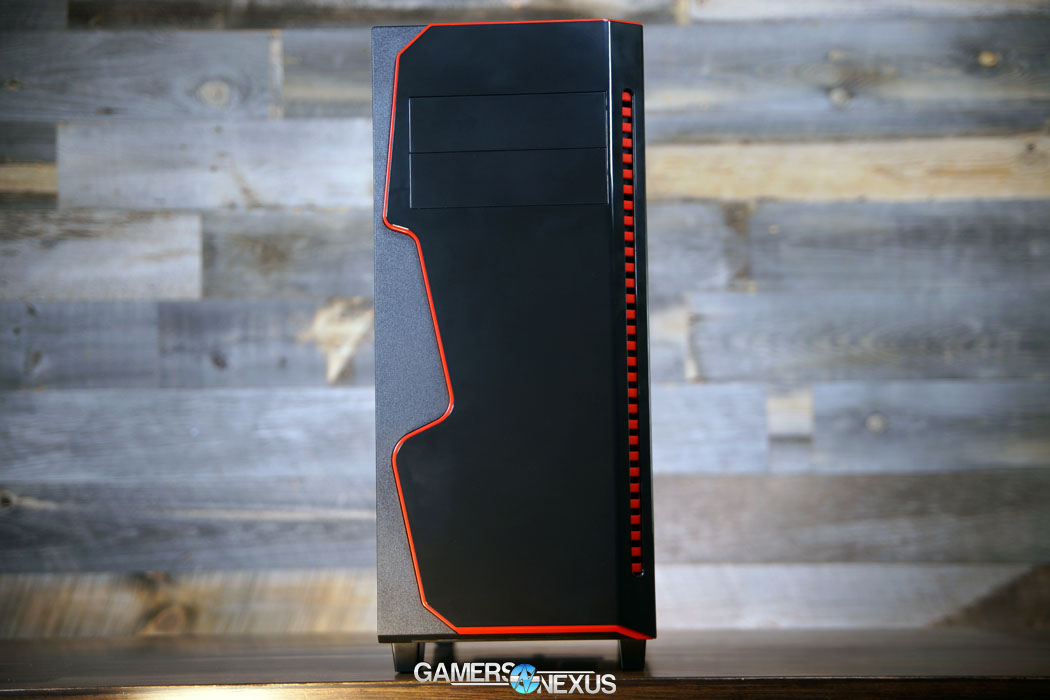 Rosewill's Gungnir is designed with a 'loud' approach to aesthetics, if we're falling prone to synesthesia. That can certainly be a good thing, but it's not well-executed in this instance. The front panel comes across as something designed following a two-minute tutorial of the 'pen tool' in Photoshop (in fact, we recreated it – see 3:13 in video), and while we normally refrain from aesthetics discussion, the Gungnir is too disjointed in its presentation to ignore.

A key signifier of limited QC or design oversight is the consistency of paint color; the Gungnir uses three different tones of black in a one-inch square area. The steel top panel is a gray-black color, the plastic front panel (top, near the IO) is a darker black, and the front of the front panel is a glossy, pitch black. We only mention this because it's not intentional, and that's clear to us as veteran case reviewers. The black tone difference between the steel and plastic paneling is a result of poor color matching through the material change (plastic and steel respond differently to the same paint). A very small mark against the case, but that's just to get us rolling. 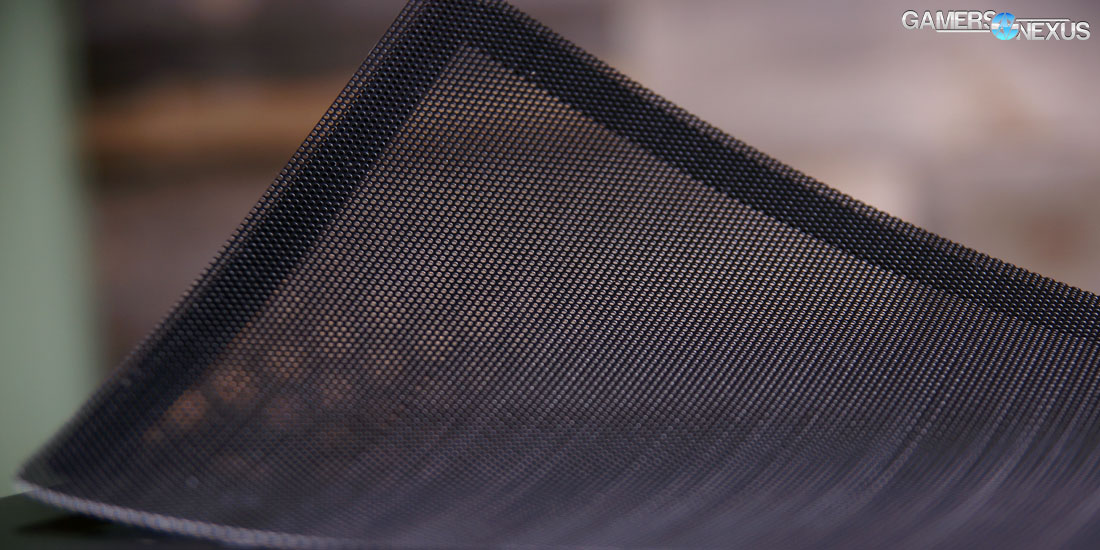 (Above: We really like this new trend of magnetic dust filters)

We've spotted this in the past with Rosewill cases. In fact, back when we briefly did some pre-production analysis for the company, it was our suggestion to unify the Throne's white colors such that they would appear more consistent between plastic and steel paneling. This is a long-standing, small issue. Slightly more attention to detail could unify the design.

We will give credit where it's due, though – the front panel has marginally more airflow potential than the Phanteks P400, which isn't saying a whole lot, but its grilled left side is reasonable. The company could further improve this by reducing the thickness of its plastic bars substantially on both the left and right. The top panel also deserves credit for its magnetic dust filter, somewhat of a hot trend right now. 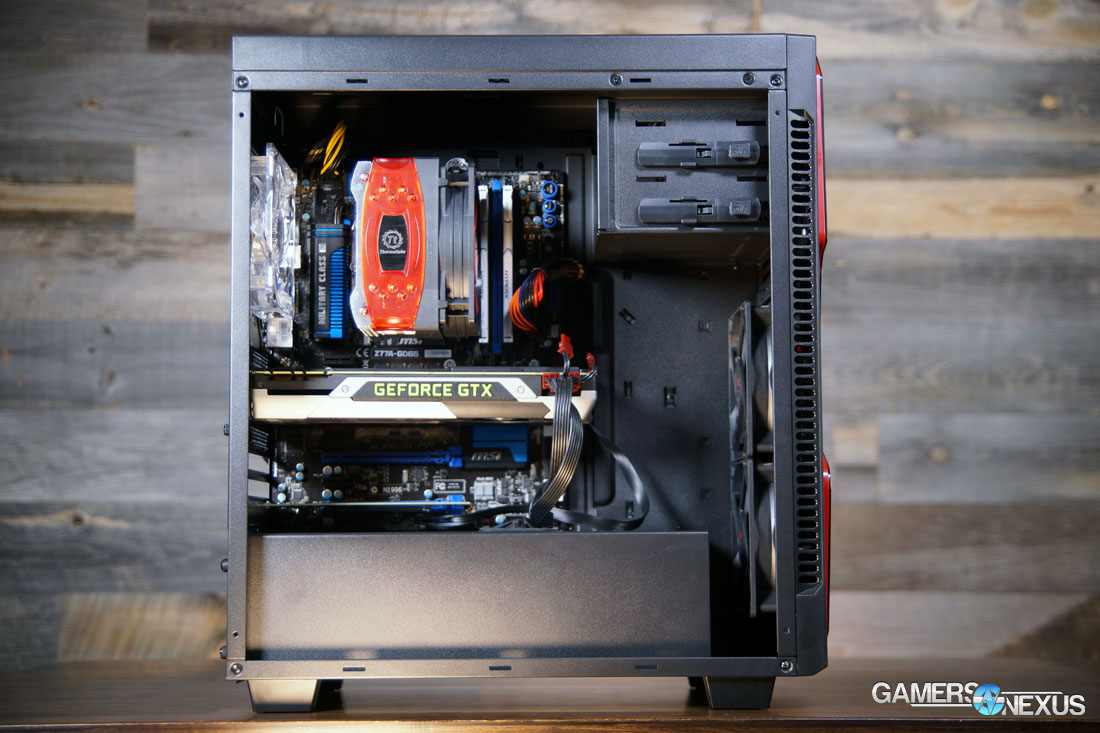 The Gungnir must have a familiar OEM, because it feels like we've looked at this case a few times before. The interior completely lacks any cut-outs for cable management, and instead defers to a “split-level” motherboard tray to allow horizontal cable management behind a chassis panel. The idea is good in concept – similar to NZXT's cable management bar – but doesn't provide enough clearance between the right side panel to close (which already has trouble closing – see video). Cables can't be routed to the FPC through any cut-outs south of the board since none exist, and so they must be wired in a more direct, less clean path – again violating the entire point of the HDD cage elimination and PSU shroud.

Thankfully, PCI-e cables can be routed straight through the PSU shroud; it's actually somewhat required, since the space between our full-size ATX PSU and the HDD cages is small enough that there wouldn't otherwise be management space. And that's not to mention the fact that the PSU barely fit within its compartment – it'd be easier with, say, a Corsair CX600 or similar PSU, but the case plainly lists support upwards of 220mm (what isn't as obvious is that the HDD cages would have to be removed to actually support this size). Our PSU isn't that long, though – it's 180mm, well within normal sizing for well-equipped ATX PSUs. It's also not the length that was primarily problematic with the Gungnir, it was the height. The Gungnir, like the Eclipse P400 from Phanteks, scrapes along the top of the PSU if not installed with the greatest patience. The bottom-front mounted HDD cages then block cabling, so (again) the point of the PSU shroud is somewhat sacrificed – especially since a good portion of $65 case buyers won't have modular PSUs. This is something we tried to explain to SilverStone at CES. Even just removing one of the HDD cages would free-up enough space to stuff excess cables somewhere; presently, there's just no room to maneuver in the Gungnir, the P400 is the same, and we fear that SilverStone may also fall victim to this oversight. 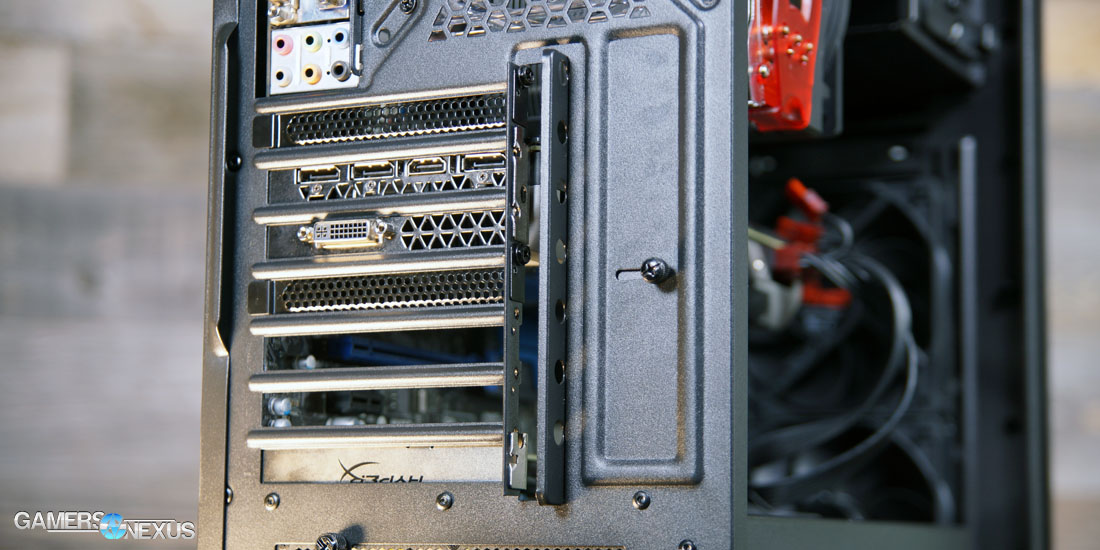 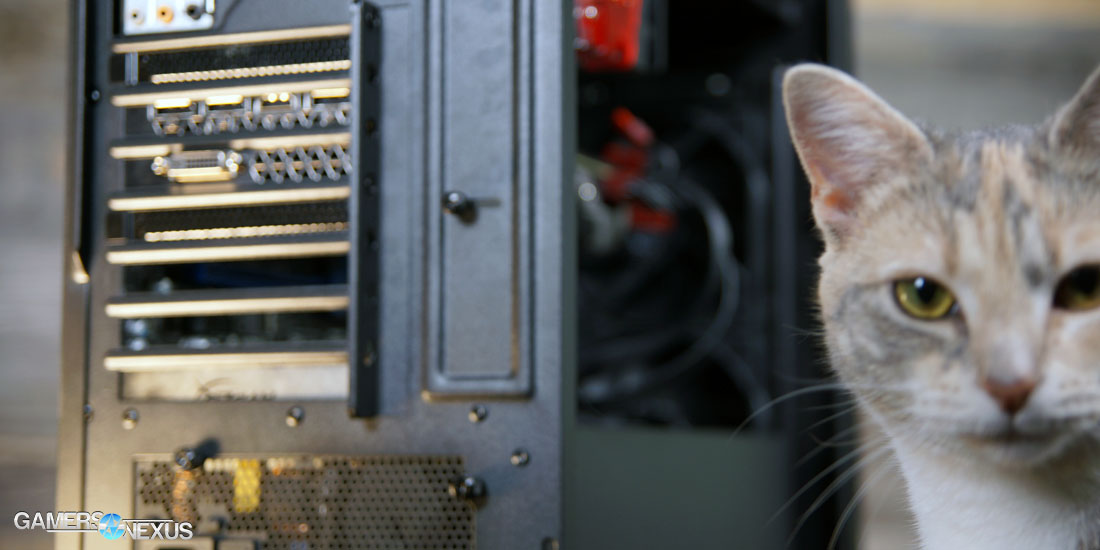 (Above: The most annoying design feature on the case -- a 'cover' for expansion slots that just gets in the way)

To be fair to Rosewill, a fan hub and fan controller are also present on the case and seem functional, based on quick voltage checks of the regulation. We like fan hubs, so this is a point in Rosewill's favor. Unfortunately, that fan controller and its accompanying front IO are all mounted to the plastic front panel. This is an old-school approach to design, and one that isn't good; it'd be better to mount the PCBs and FPC/IO to the frame (chassis), then cut-out holes in the top or front panel. Such an approach would allow easier separation of paneling, which is beneficial in the long-run for product durability. This is especially true given Rosewill's claimed CLC support. 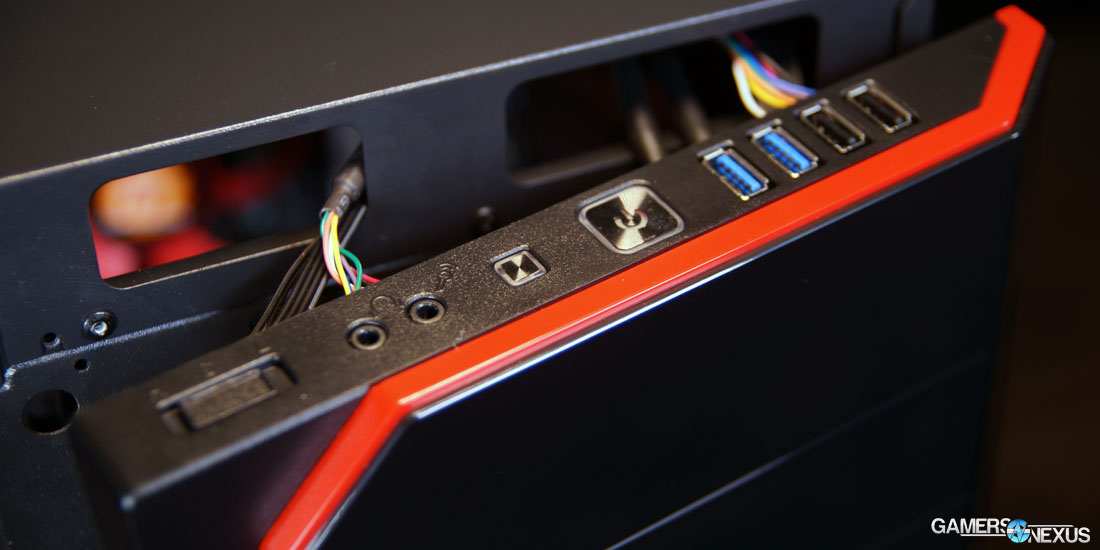 (Above: PCB / front IO is attached to front panel)

Enough. Let's look at thermals. See page 2 for thermal analysis and the conclusion.