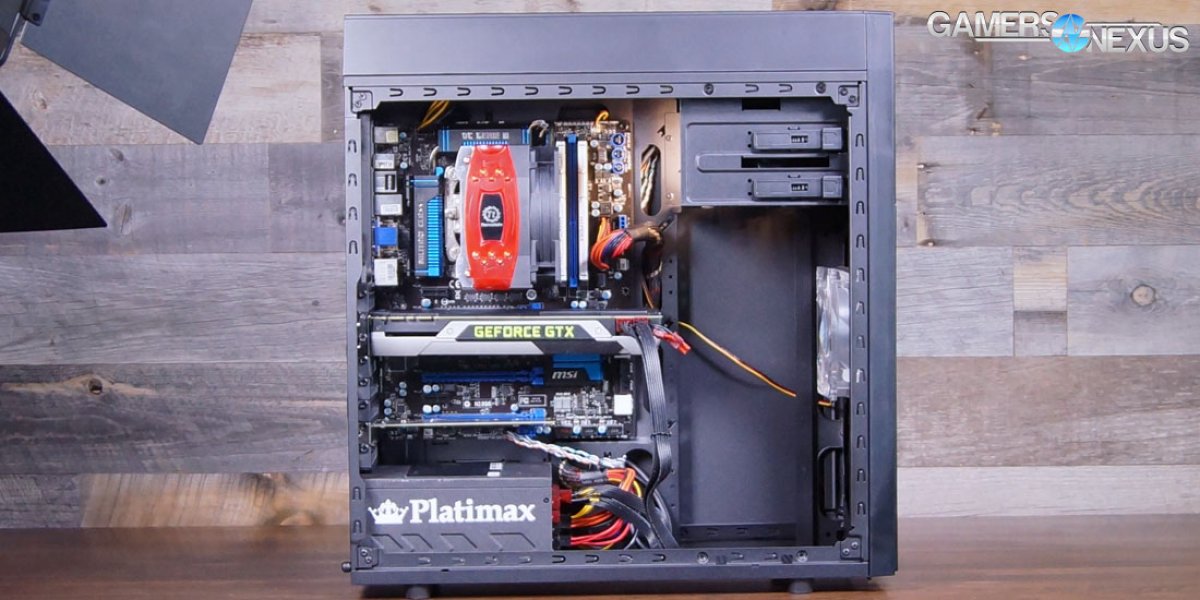 External build quality of the SilverStone Kublai KL05 is superb. Paneling is thick and sturdy plastic (top/front) and steel (sides), with clean edges and reasonably small panel gaps. The top panel impresses us most: Rather than using plastic 'alligator' clips, the top panel slides into place on rails and is secured with thumbscrews – no risk of ripping off during transport, and no broken clips after a few remove/install cycles. The top panel also contains ample space for almost all liquid cooling radiators, sans a few odd-ones-out like the Kuhler series.

The exterior of the case is relatively inoffensive and plain, but it's got discreet stylization on the front panel. The paint is consistently colored across all materials, which is kind of a rare thing in these $70 cases. An easily removable front dust filter allows quick cleaning of front intake, and an equally easy-to-remove top panel grants instant access to the 240 or 280mm radiator mounting slot. Radiators can be readily mounted above the chassis and within the large top panel, allowing for cleaner builds and isolated cooling.

The KL05 is the type of enclosure that could be deployed in an office/work environment without garnering too much attention. Inclusion of a side window (on the “BW” model) does expand the market to the more gamer-type users, but we're not excited about the window's implementation. It's cramped and oddly positioned, and overall not particularly functional or pretty. 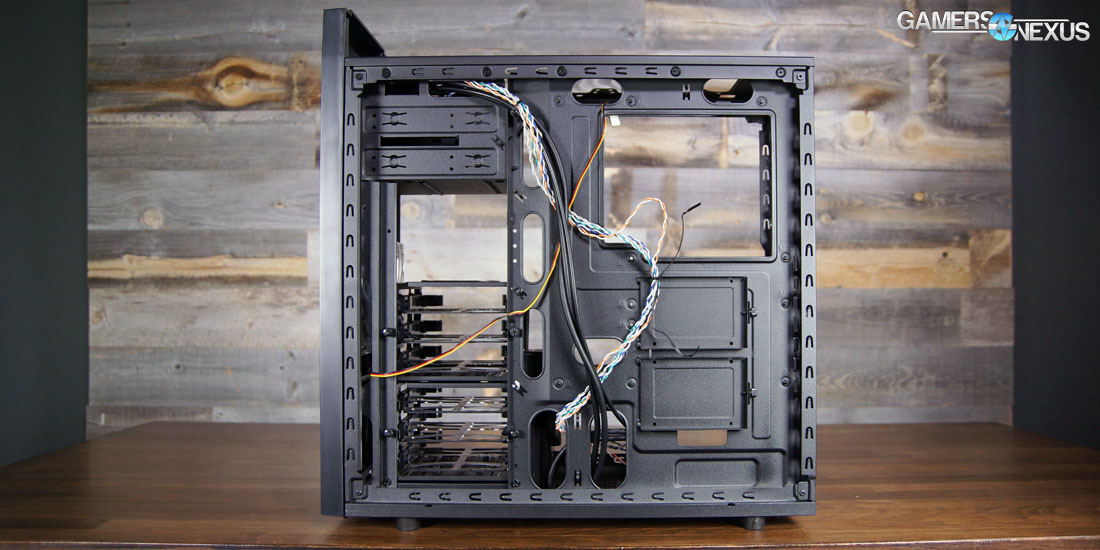 The Kublai KL05 is a stout enclosure. The design is more “traditional” – by which we mean it's a step away from the S340 and subsequent shroud-equipped followers. SilverStone is still running two optical drive slots (more targeted toward non-US markets), offers six modular HDD/SSD sleds in the main compartment, and runs two SSD sleds on the rear of the case.

The KL05 is targeted at mid-range PC builds with an entry-to-mid level budget for the case. Cooling has long been a strong point for SilverStone cases we've reviewed, and the company's kept a function-over-form attitude toward cooling and thermal design. Although the KL05 still boasts expansive support for various cooling solutions, the case itself ships relatively barebones. A single 120mm front intake fan is included with the windowed version of the case, SilverStone taking the approach that any tower cooler will sufficiently exhaust its heat through the rear ventilation without a pre-installed fan. Similarly, anyone buying a radiator can use the ample headroom to install their cooling solution and won't need pre-installed fans, since any consumer-grade CLC includes its own fans. 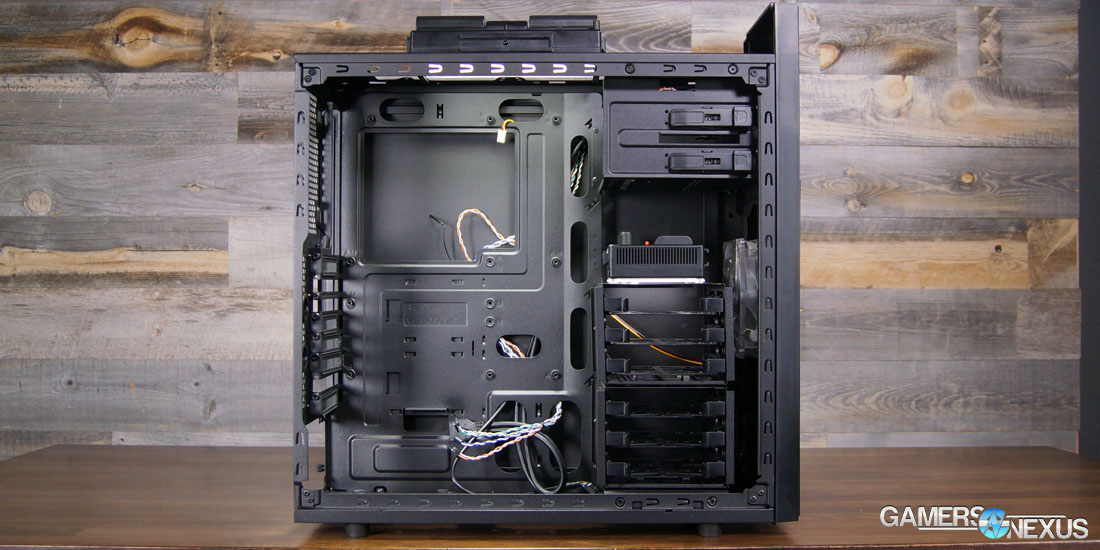 That makes the KL05 an interesting enclosure since it's so simplified in cooling design, but we ran it through the thermal bench – as we always do – and even tested a few alternative cooling solutions. In one such test, we installed a bottom intake fan; in another, we removed the hard drive cages to see if airflow would perceptibly improve. The results were interesting, primarily considering that most changes are easily done without additional (or significant additional) purchase for potential case buyers. More on that momentarily. 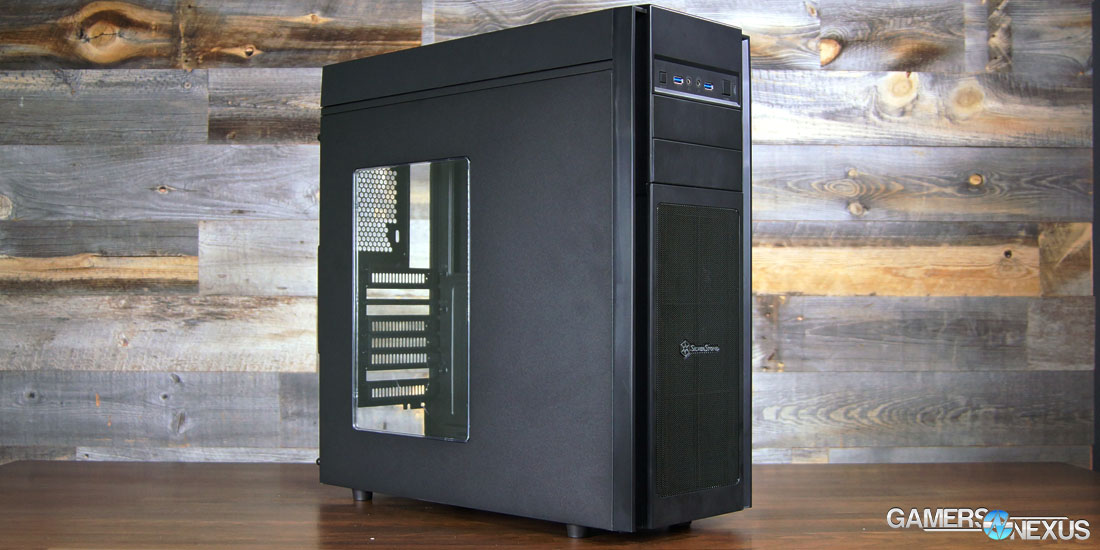 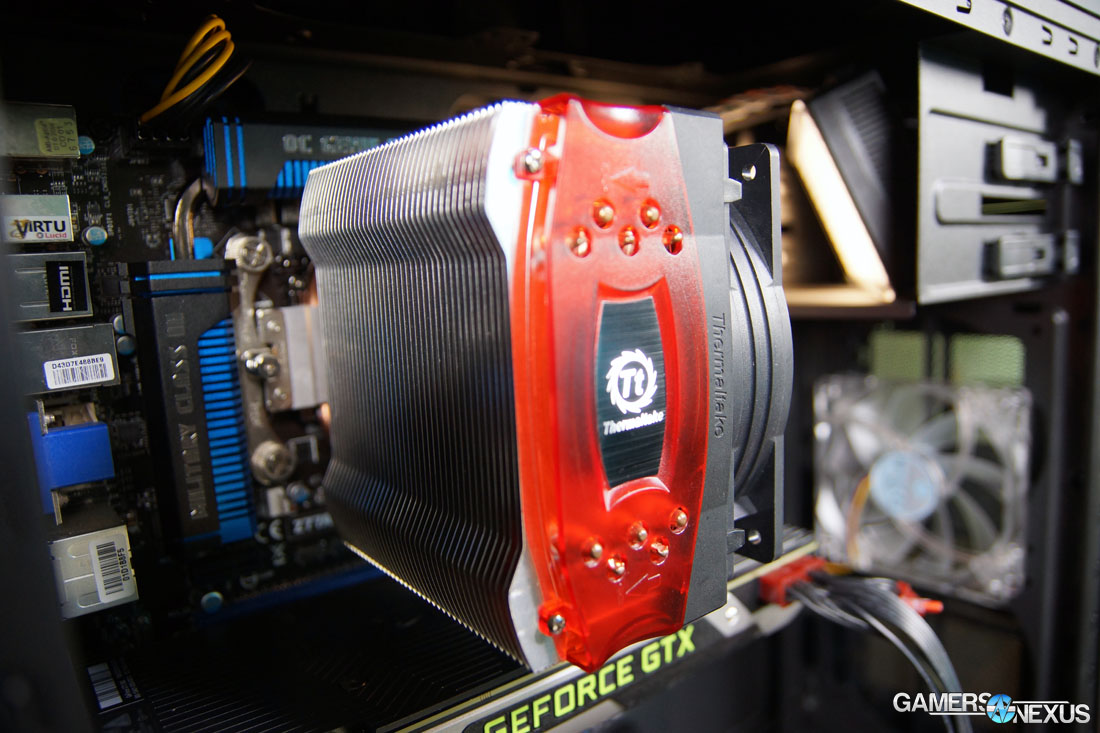 Cable management is a major point of fault for the KL05. It's difficult to hide – a natural side effect of building a case without a shroud – but routing holes could have been managed more reasonably to minimize visibility. Front IO cables for the KL05 are multi-colored rather than blacked-out, making them more visible; cut-outs for bottom-row IO headers do not exist on the KL05, so the cables must be routed visibly through the case.

There needs to be a cut-out above the PSU for access to FPC, USB, and audio front panel headers. Instead, we have to share pass-throughs with larger cables, which positions the front panel connectors farther away from their destination on the motherboard.

CPU thermals for the SilverStone KL05BW land it at 41.7C delta T load when in the stock configuration, making it cooler than the P400, Gungnir, and marginally cooler than the S340 – but not quite as low as the 600C, a case with more fans and greater air intake. Here's where it gets more interesting: Removing the hard drive cages drops the thermals to 40.8C – just under 1C change. That'd make it a worthwhile endeavor if you legitimately had no use for the cages. Adding a rear exhaust fan, something that seems an obvious stock configuration choice, actually does little to impact cooling compared to the marginal added investment. Thermals drop to 40.43C from 41.70C, which isn't much of a gain for the extra fan cost. SilverStone acted correctly in its opt-out of a rear exhaust fan, and hasn't sunken to the marketing-driven “more fans is more better” methodology of many competitors. 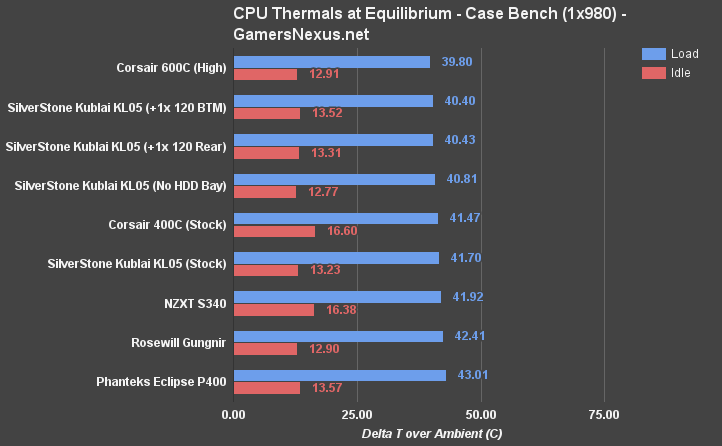 Moving that fan to the bottom intake port – a location traditionally with heavy impact – sees a reduction to 40.40C. Effectively the same as rear exhaust.

Stock, it appears, is the most sensical configuration for CPU thermals. Let's look at GPU temperatures. 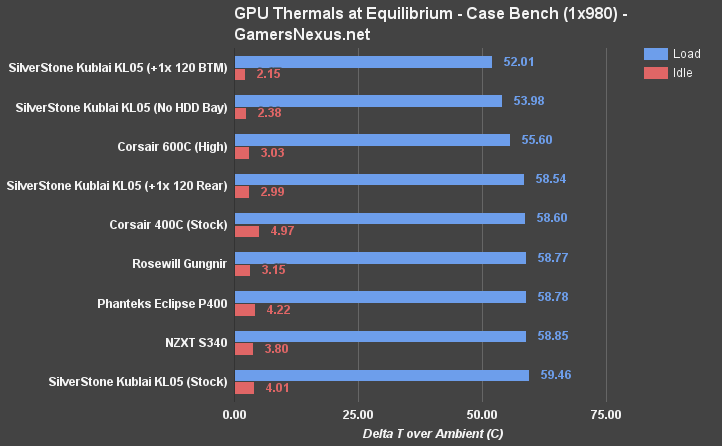 The KL05 stock configurations runs the GPU warm at 59.5C, behind every other case on the bench. Adding a rear exhaust fan doesn't do much to help – which makes sense, since all it's going to do is move more air around near the CPU. A bottom intake fan, as we've traditionally found to be the case, changes everything for the GPU. Suddenly, GPU temps drop to 52C, marking the KL05 as the best performer on the bench for GPU thermals. If it weren't for the hard drive cage, we'd suggest this as the stock configuration – but adding a 120mm bottom fan does require removal of the cages and limited PSU space.

The next best trade-off – and it is a damn good one – is to remove obstructing cages to improve thermals to 53.98C (no extra fan). This is a marked gain over the 59.46C temperature of the stock configuration.

Temperatures aren't particularly exciting overall, but not offensive. GPU thermals could certainly better. If we were to suggest one change, it'd be that any user of an SSD-only config immediately remove unused HDD cages to improve GPU “breathability.” For SilverStone, cooling performance is a little bit of a let-down compared to previous products – but the efficiency of SilverStone's single-fan cooling solution is impressive, if dragging a bit behind some of the immediate competition. 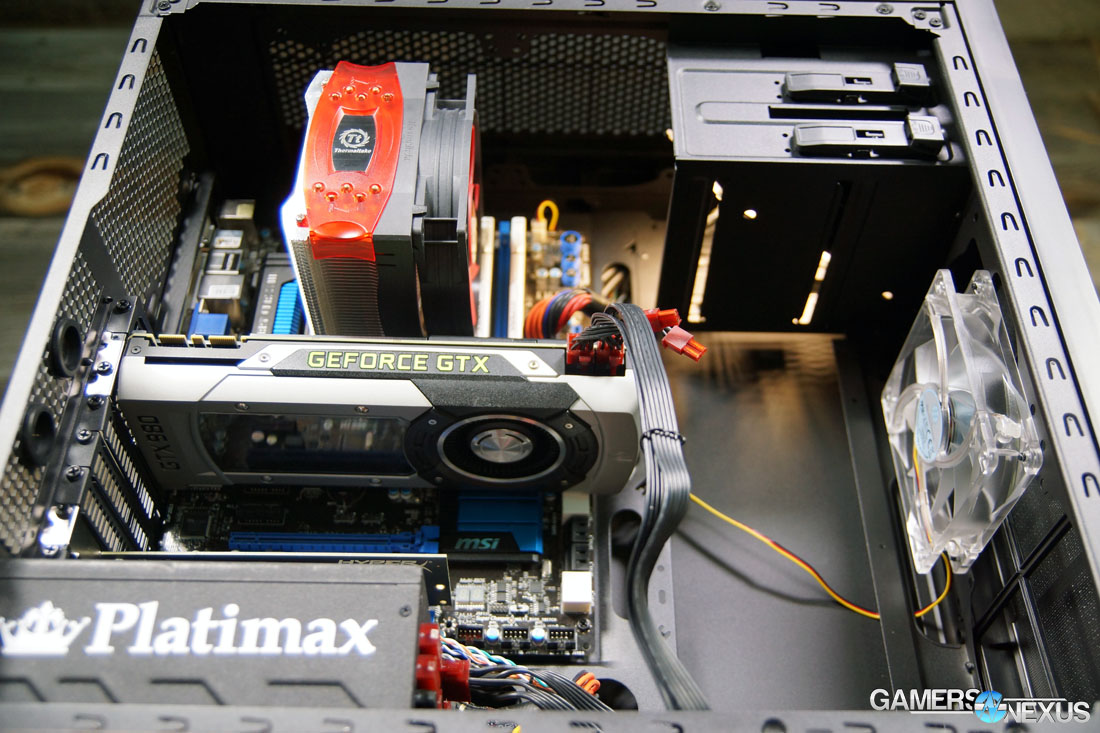 SilverStone's panel construction is top-notch for the KL05, and is the one factor we'd strongly encourage other manufacturers to competitively research. The top panel removal is particularly noteworthy, as it's braced against upward lifting force and resilient to multiple install/remove cycles, which normally break panels with plastic clip mounts. The top panel has enough depth to fit radiators and isolate them from the internal components.

Cooling is impressive for a single-fan setup, but could definitely be better. GPU performance massively improves by removing the top drive cage, and improves further by adding a bottom intake fan. If you've got the ability to do either, we'd recommend it. 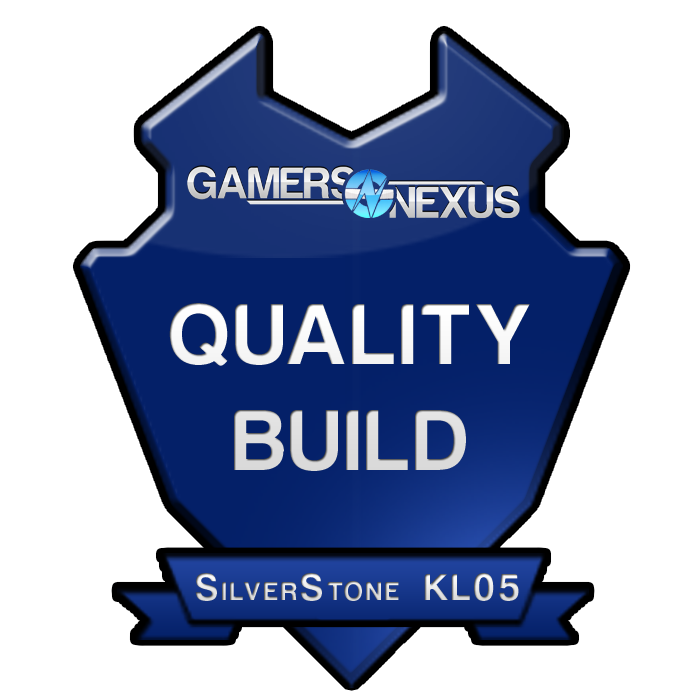 For a ~$70 enclosure, SilverStone's done well with the Kublai KL05. It's well-built, uses minimal active cooling (quieter) while getting the job done as well as most competition, and values overall build quality against other factors of the case. Cable management is a serious point of improvement for SilverStone. The windowed version of the case could do with a wider window to look less awkward, but that's a minor complaint.

The primary criticism we'd offere to SilverStone, though, is that the company improve its naming scheme. “Kublai KL05B-W” is not the most user-friendly name. The Raven – that's a good case name. We'll give them that. But KL05B-W, RL05-B – not great names.

As a case, the KL05 is sturdy, well-built, and something we'd recommend for mid-range and budget builders who don't like the PSU shroud look presented by the S340, 400C, or P400.