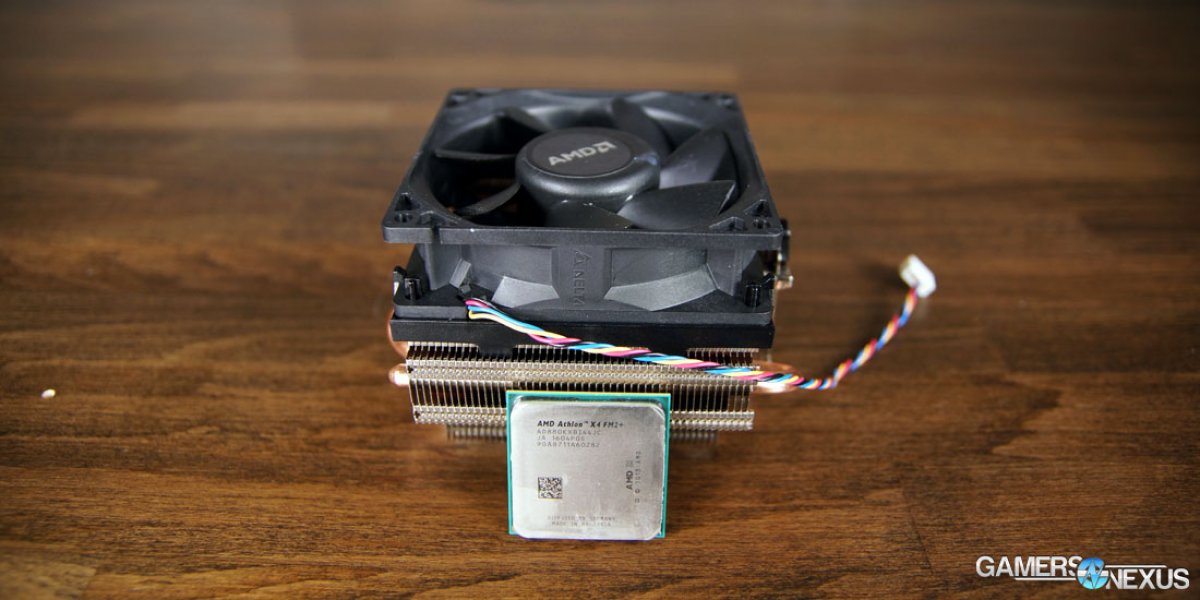 There's really no point to buy the Athlon X4 870K, at this point. The CPU shipped silently, saw almost no media coverage, and is now an odd-man-out for ~$90. It's a few bucks cheaper than MSRP of the 880K, which we imagine will soon completely phase-out the 870K.

The 860K is still a product worth looking at, though. It's $70 to $80 (more with the NS cooler) and on identical architecture to the 880K, but the 880K operates at a 300MHz higher base frequency. This is where some games will show a performance delta. We don't have an 860K for the bench (but hope to buy one out-of-pocket for testing), but do have an older X4 760K we ran through some games.

Other than this frequency difference, the only other major change is the cooler. The 860K ships with either the 95W cooler or the 125W cooler (the latter being the same as the 880K's), but for $10 more.

We tested using our updated GPU test benches, detailed in the tables below. Our thanks to supporting hardware vendors for supplying some of the test components.

Note that previous tests were reconducted to account for driver updates or changes to game software. We saw some improvements in a few cases, but generally the same results were output (the nature of using established games). Some changes in low values may be present due to modifications made in our methodology since the previous APU review, which was quite some time ago.

Learn about our chamber-validated thermal methodology in more depth here. 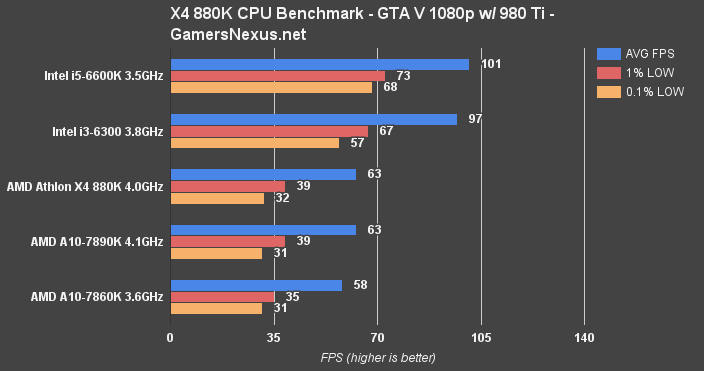 The 1% low and 0.1% low metrics yield nearly a consistent 60FPS low-end for the i3 CPU, which can't be said for the AMD devices. The X4 880K has some inconsistencies in framerate performance that loosen its average and low-end metrics, shown by the 32FPS and 39FPS averaged lows. 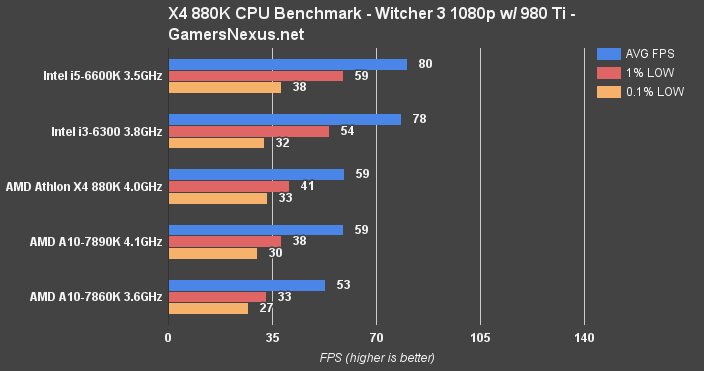 The Witcher 3 is abusive enough that the performance gaps shrink noticeably. The Athlon X4 880K sits shy of 60FPS with the 7890K (indistinguishable difference between them). There is a performance difference of roughly 28% between the i3-6300 and 880K. So far, then, an extra $50 yields somewhere between 28% and ~40% more performance, depending on title. 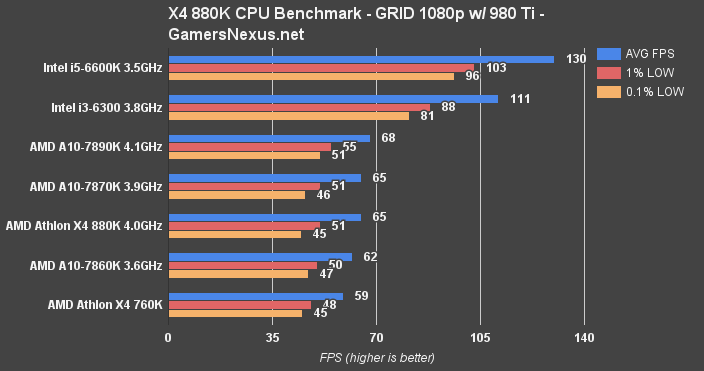 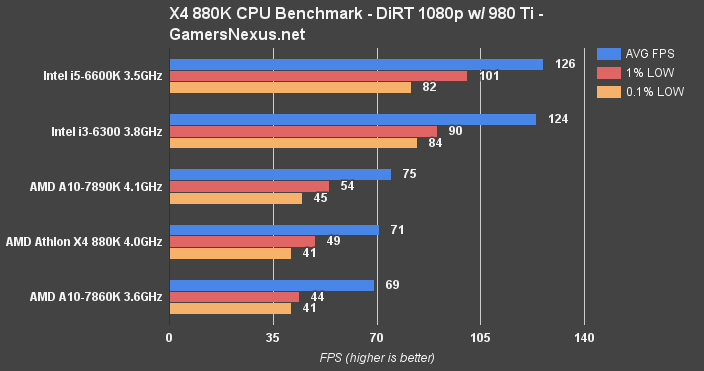 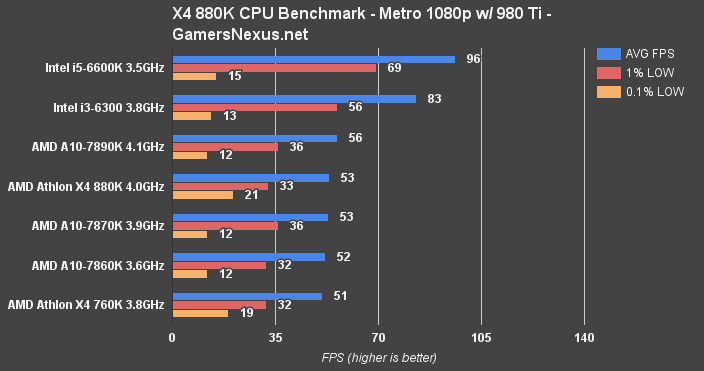 Note that Metro: Last Light is uniquely picky about threads and will present poor 0.1% low metrics for just about every CPU except those with 8 available threads, like the i7 series CPUs.

At 1080p, the Athlon X4 880K predictably performs equally to the A10-7870K, being a simplified version of the $135 7870K APU. There's a clear CPU bottleneck established when we look to the i5-6600K as a control, which pushes nearly 96 FPS average. The i3-6300, priced at $150, eats into the performance with a 14.5% performance difference against the 6600K. The Athlon X4 880K suffers a 44% performance difference when matched against the i3-6300, though the Intel CPU is $50 higher, to be fair. It doesn't make any sense to opt for an IGP considering these first tests couple a dGPU with the CPUs, and the APUs see equal CPU performance. There is no noteworthy gain over the 760K in this benchmark, though that changes in a few other tests. 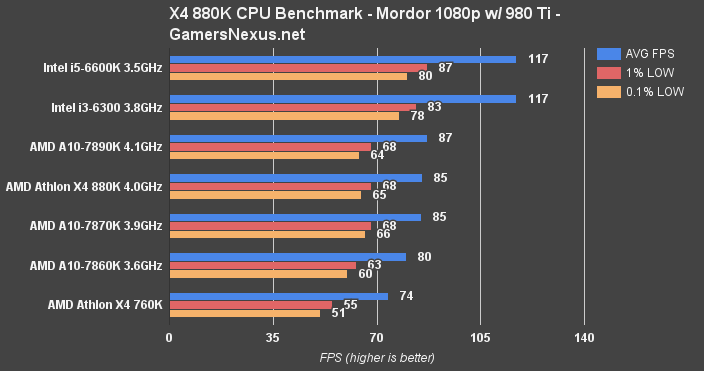 Shadow of Mordor is one of those. The old X4 760K performs at 74FPS average, a 13.8% difference from the new X4 880K. The APUs fall in between these Athlon chips, the 7870K again being effectively tied. No reason to buy that if buying a dGPU. The AMD devices are bottlenecking when compared to the i3-6300 ($150), a 31.7% difference between them, but still exceed 60FPS and are reasonable gaming chips for the price.

Overclocking efforts stopped at 4.6GHz, at which point we were unable to achieve a stable and reliable clock even with additional vCore or other UEFI tuning. The overclock isn't too impressive, but reasonable – and it was stable at 4.6GHz with no issues, always a positive. This isn't the kind of chip you buy for extreme overclocking endeavors; it's got a little extra power hidden under the hood, but it's no 5GHz hitter.

Performance deltas were generally ~5% to 10%, but some games (DiRT) saw larger gains. 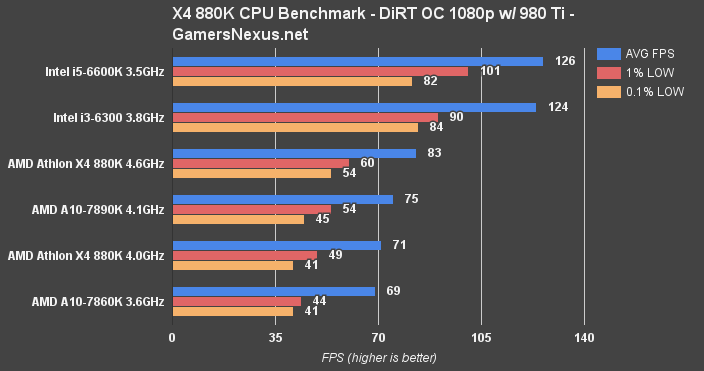 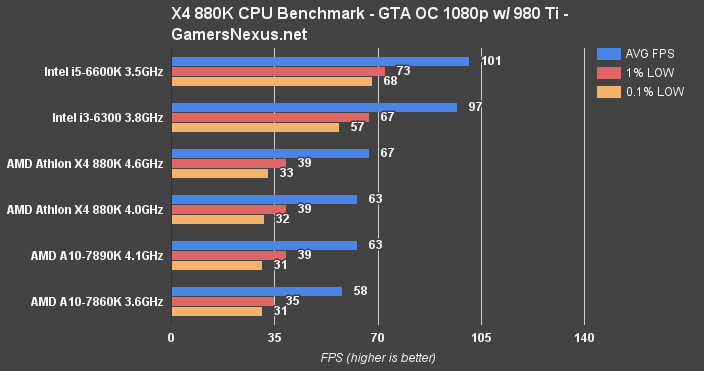 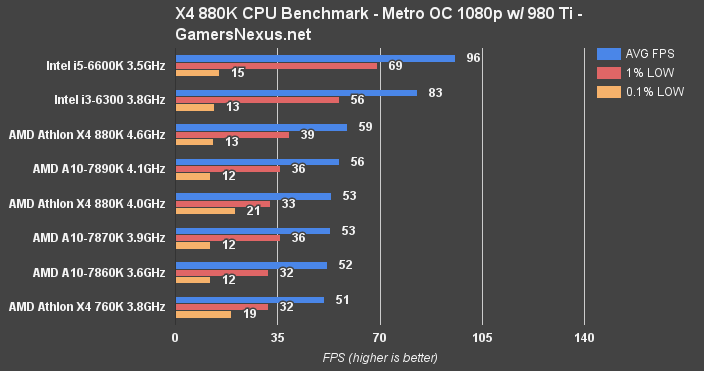 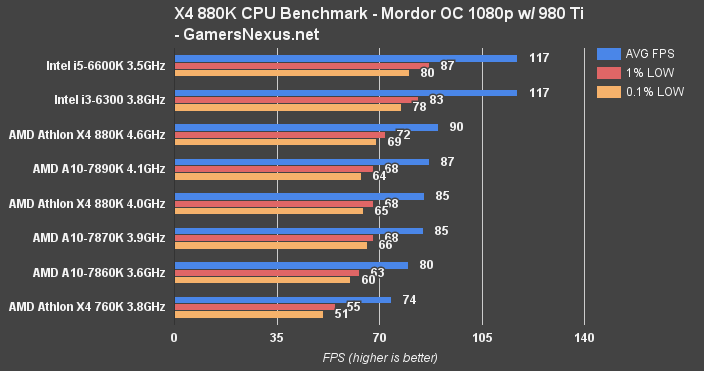 The AMD APU products are tough to get an accurate reading from. Most of the usual tools don't work, and the per-core readings are often inaccurate. Our current thermal bench for AMD CPUs is limited, but growing with each review. The X4 880K with its stock heatsink runs cooler than both the 7870K and 7860K when each is paired with their stock coolers. It's a surprisingly cool chip, aided by the fact that a large portion of the die – the IGP component of the APU – is disabled from use. 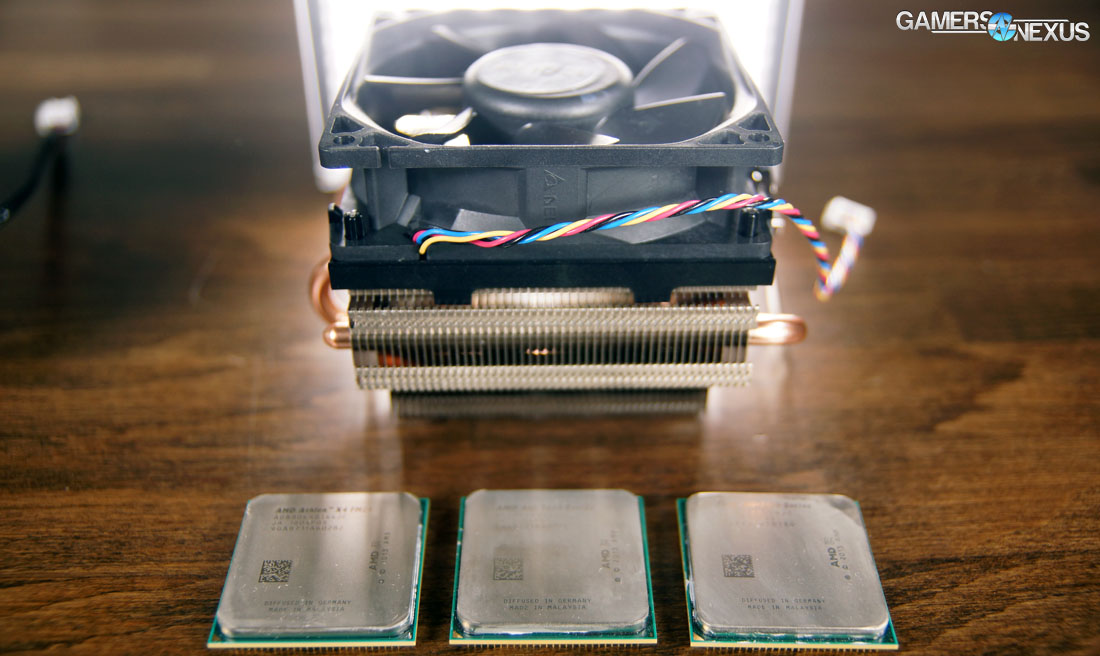 Until first-party retailers start listing the 880K, its pricing will remain sort of all over the place. The $95 MSRP makes the chip more viable than the $105 listings right now; even though it's only $10, that's $10 further from an 860K and $10 closer to an i3 – which performs markedly better. The nature of the 880K is to fill a small market gap, but one which is important – the sub-$100 CPU that's best paired with an affordable dGPU for budget gaming rigs.

The 880K makes infinitely more sense than an APU purchase for our core audience – if you're buying a dGPU, that IGP goes unused. The 880K cuts the price considerably by axing its IGP, but its CPU performance remains on-par with the 7870K and 7890K APU chips.

AMD has improved tremendously with its cooling solutions. This is one place where AMD has thoroughly beaten Intel, whose stock thermal solution leaves much to be desired. The stock 125W NS cooler for the 880K is sufficient for most users – even those playing with entry-level overclocking – and further keeps costs under control by negating the need to purchase a standalone cooler.

Thermal performance is good. Gaming performance is mostly acceptable – generally the CPU bottlenecks GPUs around 60FPS in more abusive games. It's tough to say what the staying power will be. Overclocking is generally unexcited, but is easily done for entry-level users seeking to play with clock and vCore changes.

UPDATE: After posting this review, a third-party seller on Newegg listed the X4 880K for $93. This makes the 880K an easy buy in the sub-$100 price range. It is well worth the extra $13 over the average 860K price, and far enough away from an i3 CPU that there are budget builds which would make better use of the 880K.