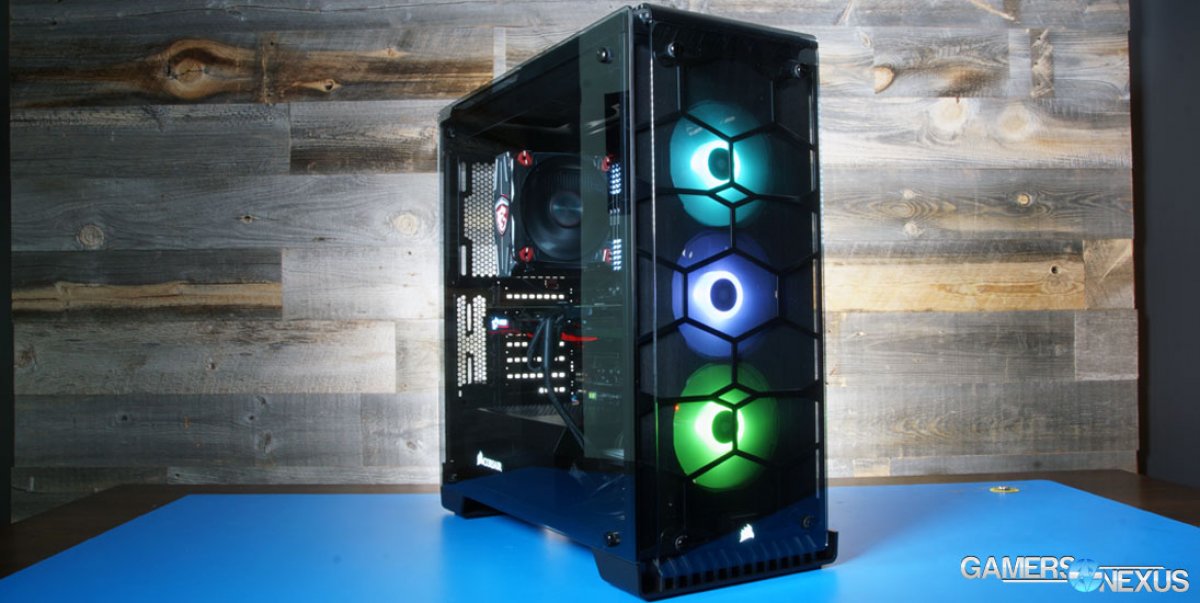 Above: In this custom animation that GamersNexus made, we're showing an explosion of the 570X's tooling and paneling. The left, right, and front-center panels are all made of tempered glass measuring 4mm thick, all attached to the chassis structure with four thumbscrews per panel. Gaps in the paneling make for an interesting visual decision, exposing the underlying structure and relying on about a 0.6" gap on the sides of the front intake for breathability. We'll put that to the test in our thermal benchmark. 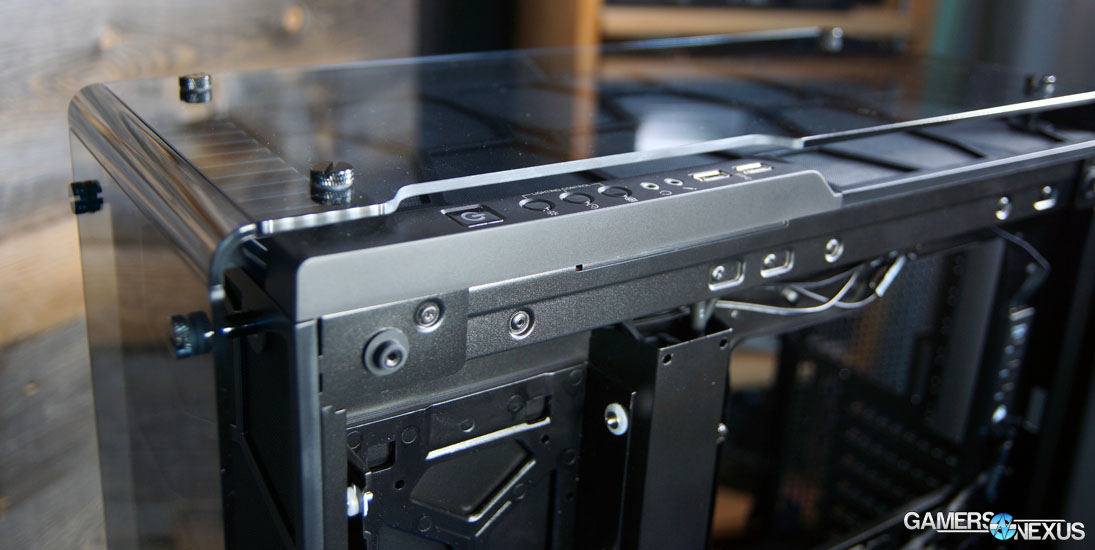 That small space is compensated for with 3x 120mm RGB fans in the front, which we tested and found to max-out at around 1500-1600RPM. Each fan has two cables: One routes to the rear-side hub, the other routes to the motherboard directly. The motherboard 3-pin connector provides power for the motor, while the 4-pin connector to the hub provides communication with yet another hub (or, more appropriately, an RGB controller). From the SP RGB controller, another three cables bridge with the front-panel buttons, providing a handful of colors, speeds, and modes that are manually toggleable. 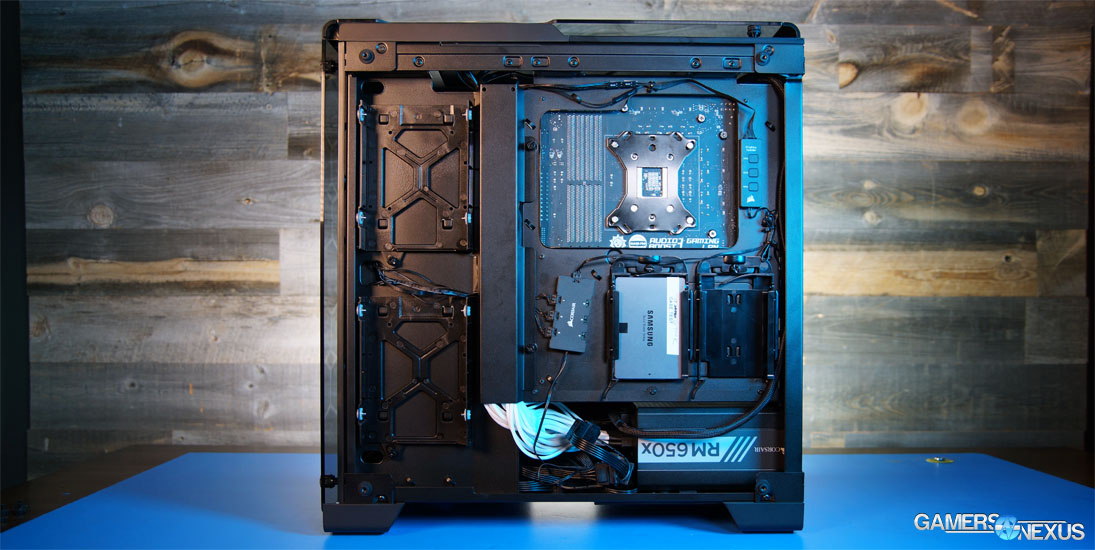 In this regard, the RGB fans are weaker than the immediate competition: Thermaltake's new Riing fans, although encumbered with clumsy software, are more configurable than what you'll get with Corsair's SP RGB fans, and the same is true for NZXT's Aer fans – also configurable through software. But we'd be shocked if Corsair weren't working on a similar solution. To Corsair's credit, they are one of the only vendors shipping RGB fans with a case in this class. NZXT and Thermaltake's are both presently aftermarket solutions. 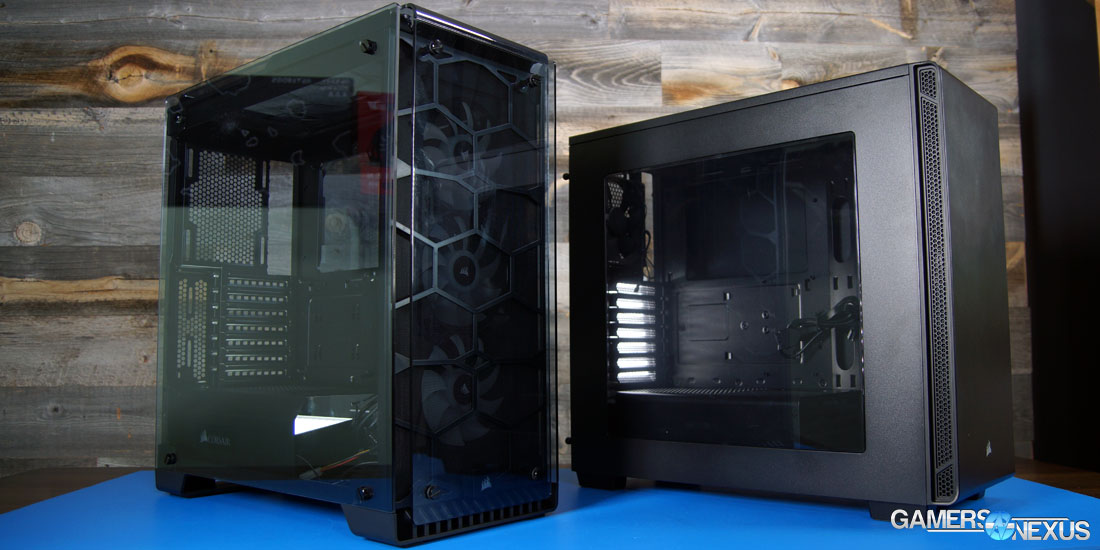 The 570X is Corsair's effort to attack both current case trends in one go: Tempered glass and RGB lights. The LEDs feel a little unnecessary, but they're what sells today. Extra controllers and LEDs add to cost, and the case would be perfectly suitable with just the glass at a price reduction.

Corsair's 570X is largely made of steel and 4mm thick glass. The PSU shroud is riveted to the case and not removable, and the entire front half of the case is dedicated to cable management and nothingness. It's kept empty of drive cages, and therefore cleaner for the full-window tempered glass. The right half of the structure is sloped and indented toward the left panel, allowing for the back-side of the tray to support 3.5" HDDs mounted vertically (like the SSDs are in most modern cases). Two 3.5" HDDs are supported -- certainly nowhere near what used to be supported in a case like this, but the industry's changing; it's moving away from mass drive storage support, likely a combination of low demand for the cages and increasing drive capacities / online storage.

Anyway, the split-level motherboard tray is something we've seen before, last discussed in the H630 review. We like the design for two primary reasons: (1) Compartmentalizing the drives reduces cleaning effort later (cages trap dust), and (2) the "split-level" design allows for more cable pass-throughs in the top of the case, between the board tray and the back-most chassis support bar. The extra space is useful for passing through fan cables and EPS12V headers, which have about three different (common) locations between motherboard manufacturers. The pass-through width isn't quite enough to push the largest of EPS12V connectors through, but splitting them into 2x4-pin and re-assembling on the other side will resolve this oversight. An extra half-millimeter in the gap above the motherboard would be the more permanent, future solution. 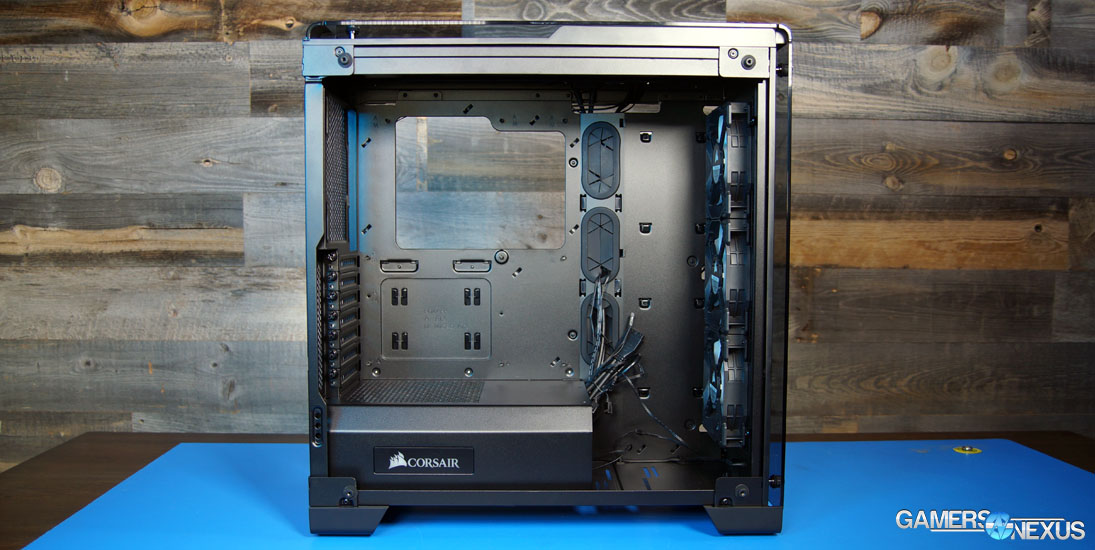 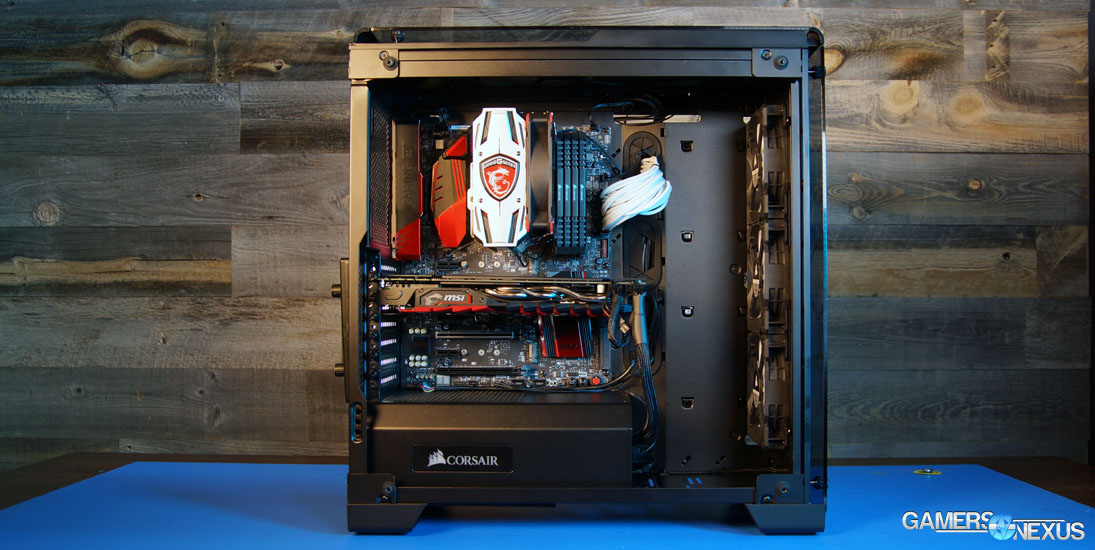 Regardless, let's talk ease-of-installation. Installation of the board is easy, though; it's a large case with a lot of room, and that means plenty of working area. The 570X has a brilliant SSD installation system, and is actually our favorite feature of the case. No screws are required -- it's a spring-loaded trapdoor that locks the SSD into place. Quick and painless, and impossible to screw up. The 270R, like the 570X, also mounts its SSD sleds to the rear-side of the motherboard tray, but uses a more traditional set of screws to hold it all in place.

The expansion slot screws are a little annoying to access in these cases. They're not a straight shot, and that could be fixed by cutting out some of the metal on the left side of the frame, or by exposing the screws through the back of the case. Even Rosewill gets this right with the Cullinan, or more appropriately, their supplier Jonsbo gets it right. NZXT also gets this right. Both solutions, unlike Corsair's, make it easier to deal with larger cards like MSI's Gaming X. Not a huge deal, but at this point, it's the small things that count. Most of the big stuff was done right. 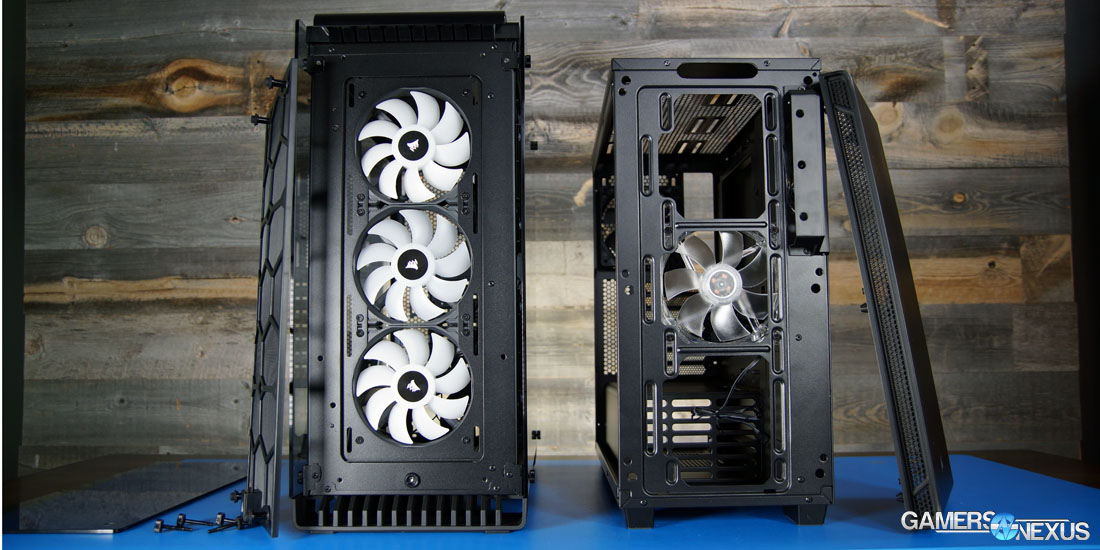 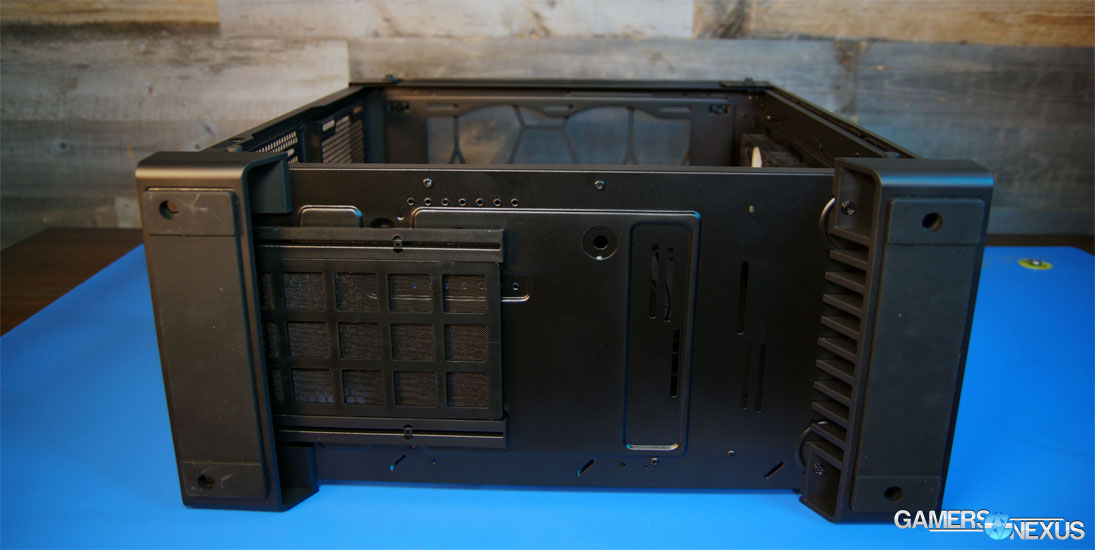 Cable management on each case is pretty similar, by which I mean fairly unimaginative. The 570X uses a piece of bent steel to cover the cables on the back-side, which sockets into the frame and offers about an inch of management room. Using Corsair's own sleeve kit for the 24-pin, it was a two-person job to clamp the cable shroud in a way that allowed it to contain everything. Had I been alone, I'd have just left the thing off. It's a pain to work with, and we think that this bar should be axed entirely.

Something simpler, like NZXT's S340 Elite plastic clamp system or Phanteks' oft-used velcro straps, would be more accommodating to thicker configurations and easier to access in the future. The cable management bar obstructs access to cables unless removed, and given how difficult it is to get on with a bundle of cables, you're never going to want to take it off again. 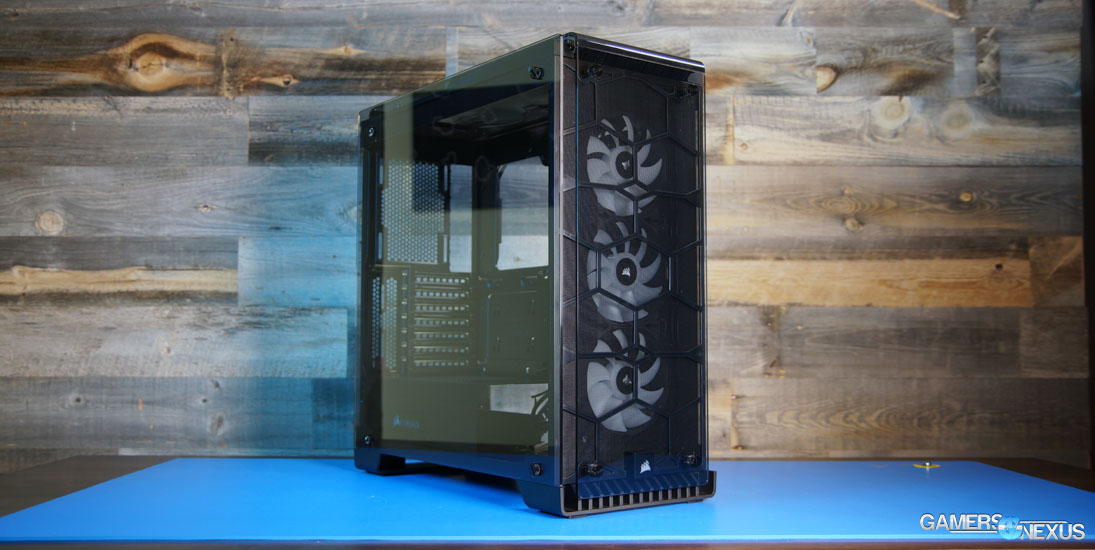 Besides, with a high-end case that's got a clear right side panel, it does make more sense to spend time intricately managing and installing sleeve cables with some color. It's already a $180 case -- the type of buyer for this enclosure is more likely to drop an extra $30-$50 on at least a few sleeved cables.

That said, we do like that Corsair added a cable pass-through on the 270R for its PCI-e headers, allowing direct access to the GPU. This is something we requested on the 600C.

As for the 270R, it's a simple case -- more comparable to the previous Corsair 200R in demeanor. The cases use different tooling, though have some similarities in the motherboard tray and its shape toward the front of the case. 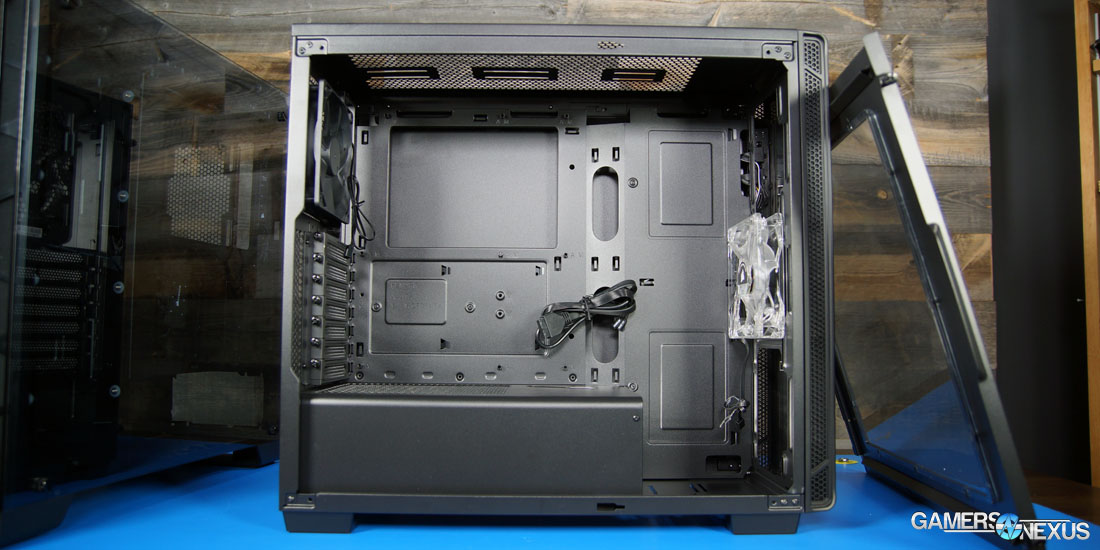 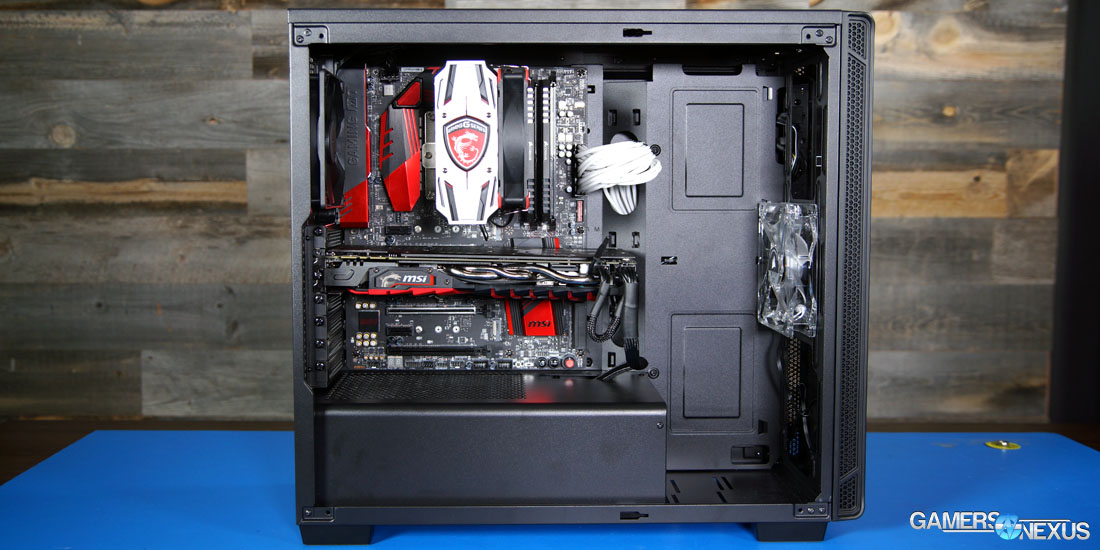 Corsair's recent budget cases have taken big steps to enabling ease-of-installation features in price-points that have previously been somewhat hostile to fingers. We didn't have trouble accessing anything within the enclosure while building, and found the 270R to be pretty standard to work with. There's nothing fancy, but it's not difficult. The SSD sled uses four screws rather than the nicer trapdoor of the 570X, it's got a less "elegant" PSU shroud (but one which we find more functional for trapping cables -- which we prefer), and only runs two fans for more traditional intake/exhaust.

Both cases could use with some tuning near the expansion slots, where it's tough to get a screwdriver to access the expansion screws at a perpendicular angle. Exposing the slots to the outside would be preferred, or cutting more space out of that (already thin) support bar in the back-left of the case. The angle does sometimes make it difficult to work with larger video cards (MSI Gaming X). Not a huge deal, but as stated in our video, it is the small things that count at this point.

Continue to Page 2 for Test Methodology, and to Page 3 for results.