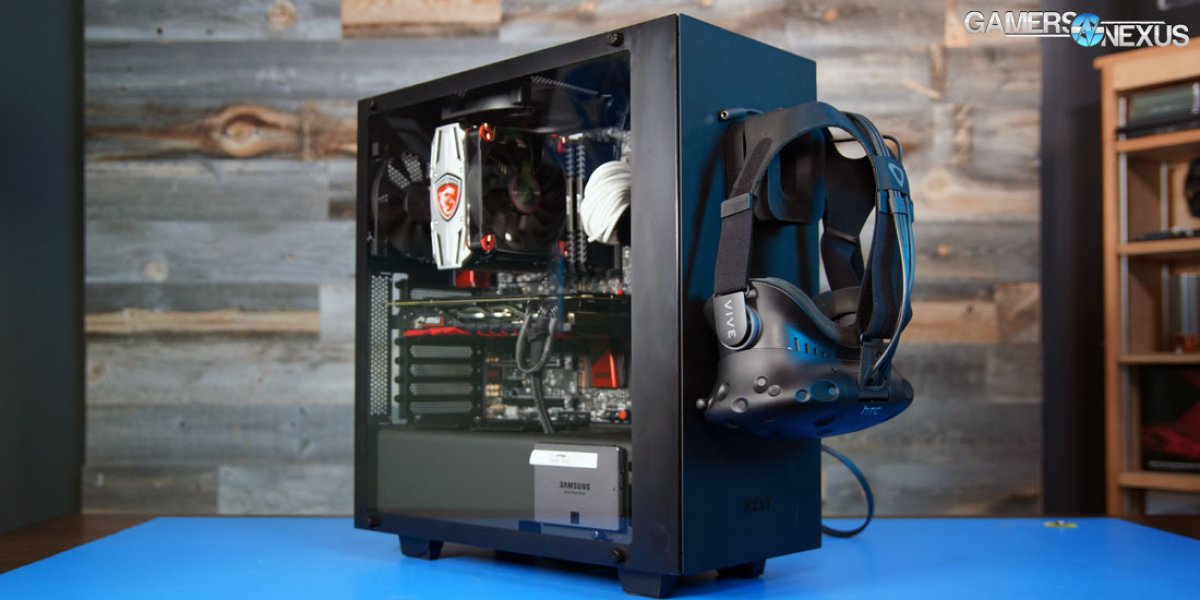 NZXT’s S340 Elite builds upon the S340, but has retooled a couple of components. Most apparent, its inclusion of tempered glass means the S340 Elite now aims to adopt an industry trend, with NZXT already invested in 2016’s other trend (RGB) through the HUE+.

The refreshed S340 Elite is priced at around $100, with the S340 non-Elite still at ~$70. This makes the Elite one of the cheaper tempered glass cases on the market, coming under the new Corsair 570X by $80, the 460X by $40, and under the Cullinan by $30. Three color options are available for the S340 Elite: Flat black, black with red accents on the cable management bar, and white and black. This is a place where NZXT excels; its designers know how and where to apply accents, and they help differentiate the options so that users can feel more unique in their system builds.

In this review of the NZXT S340 Elite, we’ll be looking at thermal performance, acoustics (noise levels), cable management, and overall quality.

Expansion is simple: The bottom-front of the case houses 2x 3.5” HDDs, hidden out of sight, with SSD support now grown to 3x 2.5” SSDs in the front of the case (two atop the PSU shroud, one side-mounted).

As for the “old” S340 as a point of comparison, the biggest changes are obvious: There’s tempered glass on the left side, accompanied by a new SSD sled that’s exposed on the left of the PSU shroud. This faces the SSD outward for exposure, if the PSU shroud didn’t already do enough of that. There are also a few new cable cut-outs in the PSU shroud, supporting the new SSD sled while ensuring routing pathways through the shroud for add-in devices, like the HUE+. 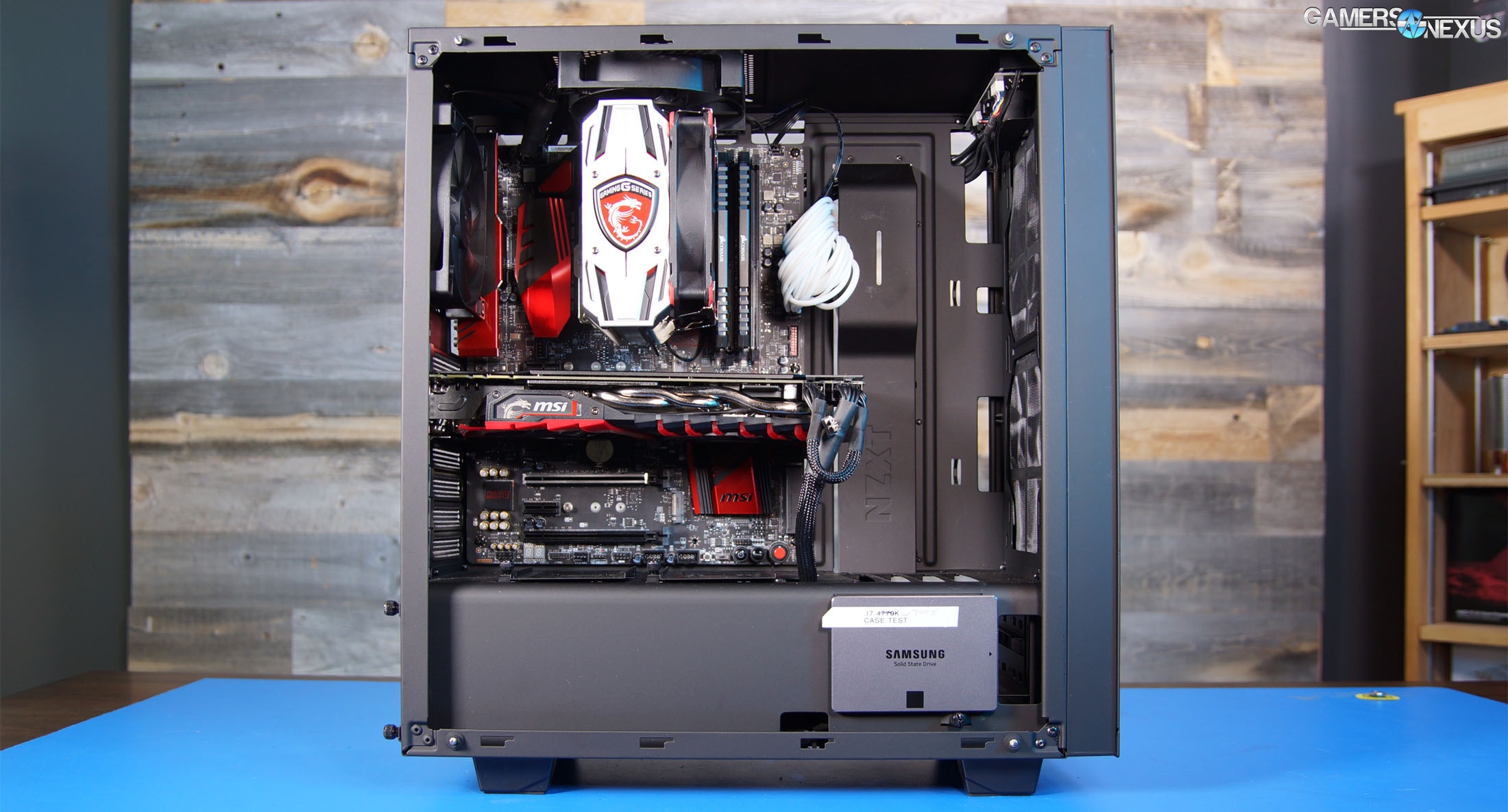 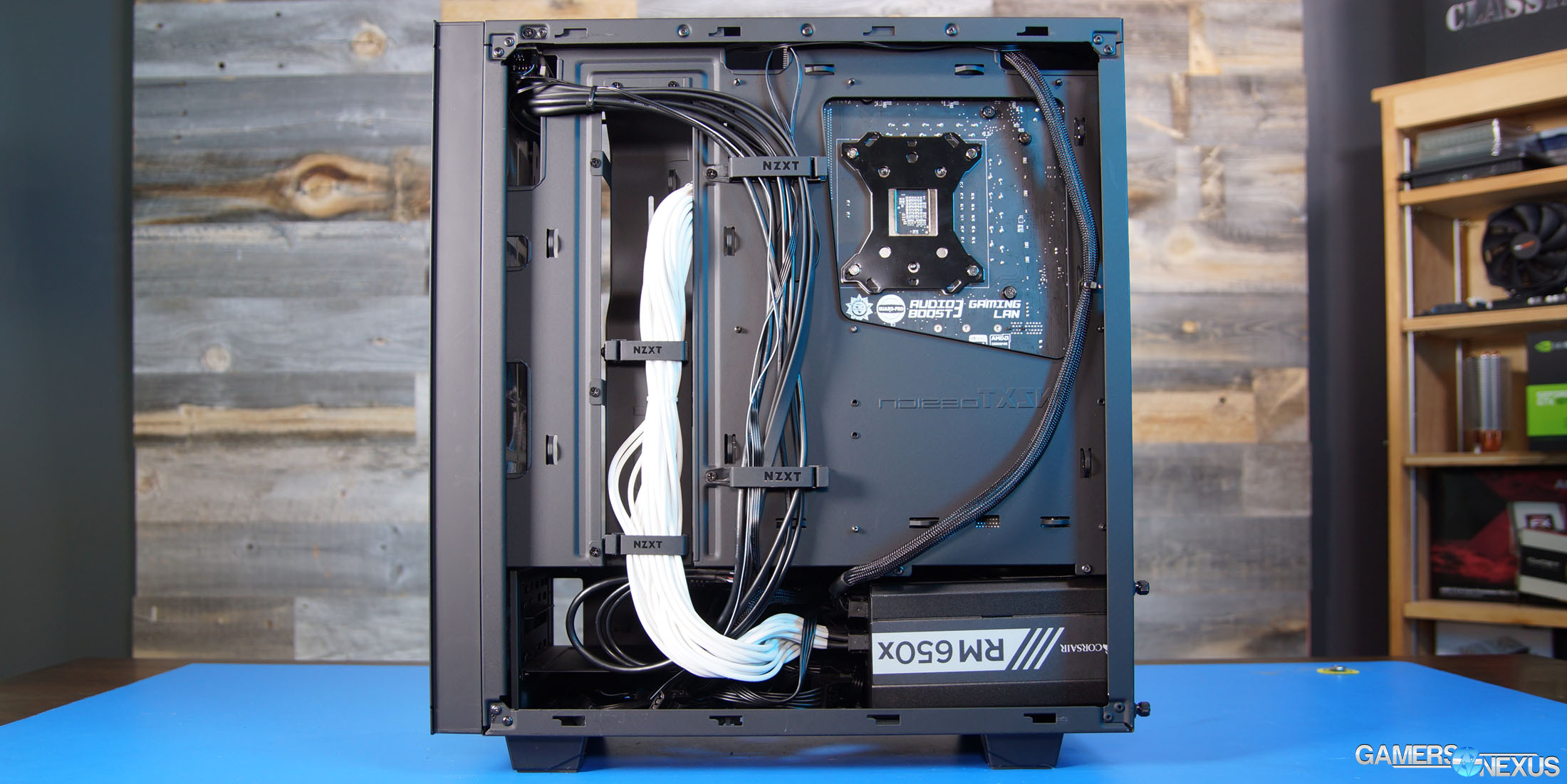 Some of the best changes are a lot subtler, but more important. In our Corsair 570X review, we said that NZXT destroys its competition in cable management – and this case is why. The S340 non-Elite is what innovated a cable management bar in mid-towers, and a 5mm expansion of that bar in the Elite has better allowed for bundling ATX cables out of sight. This is further aided by exceptionally simple, but flawlessly executed cable management clamps. These are re-usable plastic clamps that hold the cables in place, eliminating the need for zip ties and twist ties that inevitably get cut when you make a change. 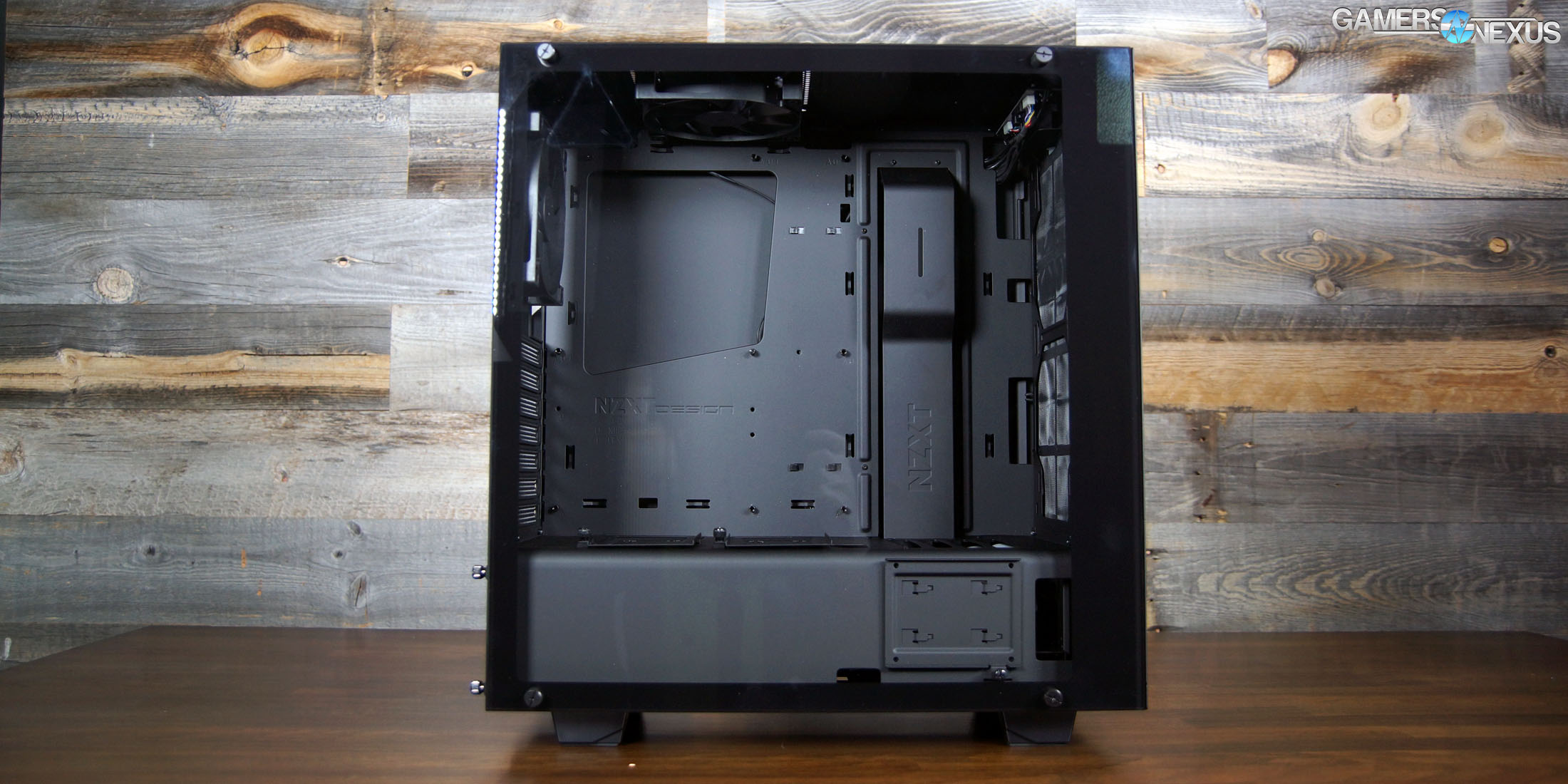 We hope that the industry takes note of NZXT’s plastic cable clamps. They work a bit better than the Velcro found on some competing cases, keep cables even cleaner, and are channeled to compartmentalize the cables as desired.

One call-out here that we have to make: In our MSI Trident review, we just commented on the over-use of “VR ready” branding, and how some silicon components don’t even really support VR beyond a technicality. And that’s silicon. It actually processes something. This is a case, and while NZXT has done well to avoid the phrase “VR ready,” they’ve still slapped text like “gets better with VR” all over their marketing materials. “VR” pops-up about 5 times on the S340 Elite official product page, with a quick ctrl+F. 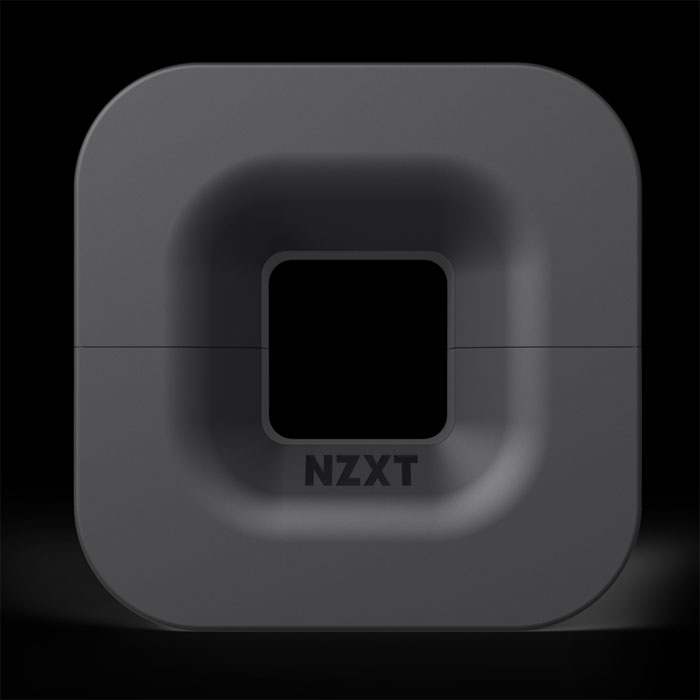 Take this rubber puck, for instance. NZXT was excited to show us this puck. By the time the third person had walked into the room and asked what we “think of the puck,” it almost seemed sarcastic—how could this thing be so liked? Well, apparently, that answer was simple: It holds VR headsets.

To NZXT’s credit, yes—it is a high-quality magnet and rubber amalgam. About as good as rubber and magnets can get, we guess. But it’s not something we’d brag about, because that air is better spent on talking-up the cable management or something else. It’s a piece of rubber with a magnet in it. This is not an exciting innovation in technology.

This “VR” initiative, embarrassing as it may be for case manufacturers to take part, does have one quasi-useful component: HDMI passthroughs. Not the most useful, mind you, but it’s at least functional. The S340 Elite hosts an HDMI port among its front I/O options, allowing GPU HDMI out to be passed through the case internally, into a female HDMI connector, and then out the top of the case (and into the relevant link box or HMD). This shortens your cable run by about a foot, either cleaning-up the Vive or allowing for greater Rift usable cable length.

A bit superfluous, for sure. But at least it does something electrically related to VR. 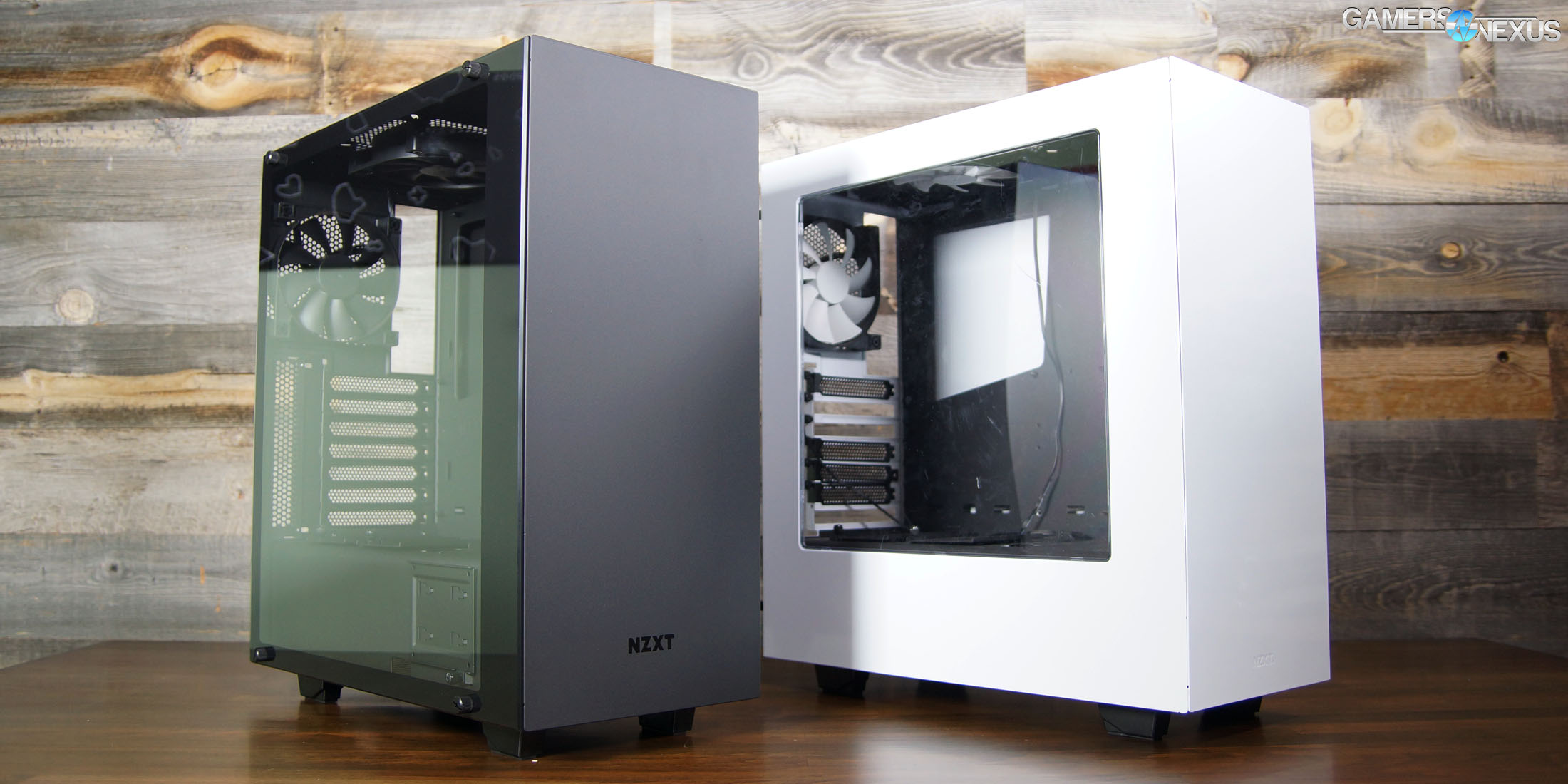 The S340 Elite includes two fans, and both are in an exhaust configuration. There’s 1x 120mm top and 1x 120mm rear. If you’re wondering why this setup was chosen, it’s because the tempered glass side panel extends all the way to the front of the case, blocking any chance for side intake through the front panel. This is how the 570X, Cullinan, and most other cases breathe – through side and bottom ventilation in the front panel. Unfortunately, because the bottom of the case will shoot all its air unnecessarily to the PSU, breathing through the bottom is sort of useless. We’d have to position a fan in the middle or top of the front panel to direct airflow to a component that matters. But again, we’re then relying on that cut-out in the top to breathe. The middle suffocates, and the top relegates us to awkwardly positioned intake that will almost exclusively cool the CPU – clearly not the most important component to cool, since it’s already the most prepared to push its air outward.

Let’s look at how this performs in benchmarking prior to further analyzing the choices.