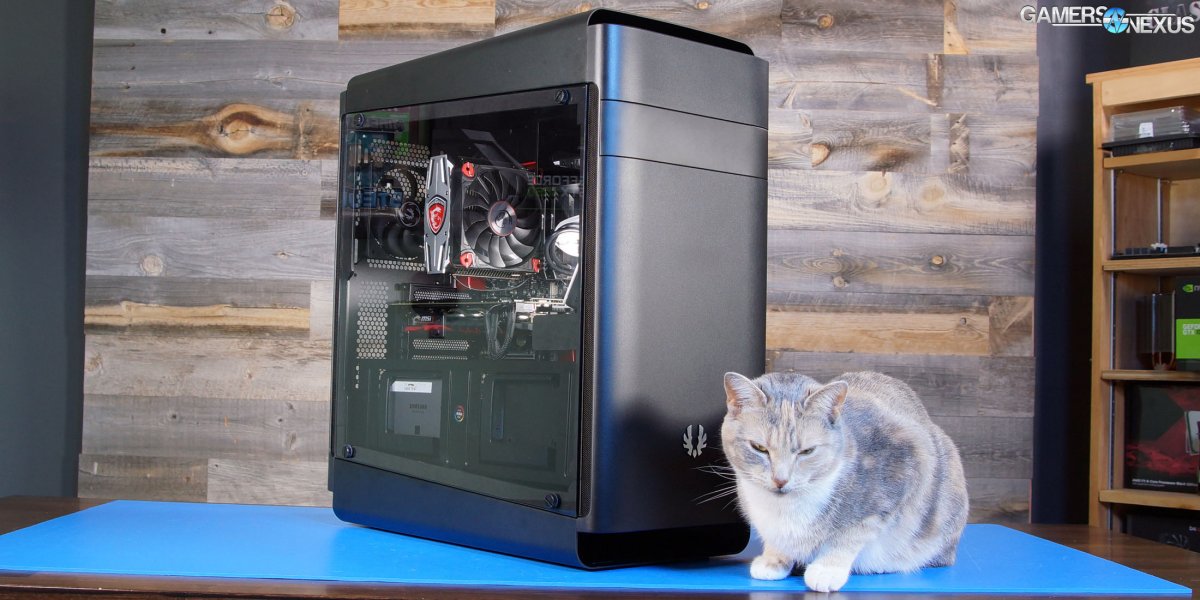 The side panels are identical panes of parallelogram-shaped, lightly-tinted tempered glass, although the panel behind the motherboard is blacked out to hide cables. The glass extends for nearly the entire length of the case, leaving half an inch of ventilation mesh at the front--a decision we appreciate--and the same strip of mesh is mirrored purely for decoration at the back. Foam and rubber pieces are carefully arranged so that no metal contacts the glass from either the chassis or the screws. The top and bottom are huge 2mm thick aluminum arches, reminiscent of BitFenix’s popular Prodigy enclosure, extending the full length of the case and protecting from dust on both ends. The overall effect is pleasant symmetry along every axis, but in a way that doesn’t impair function. 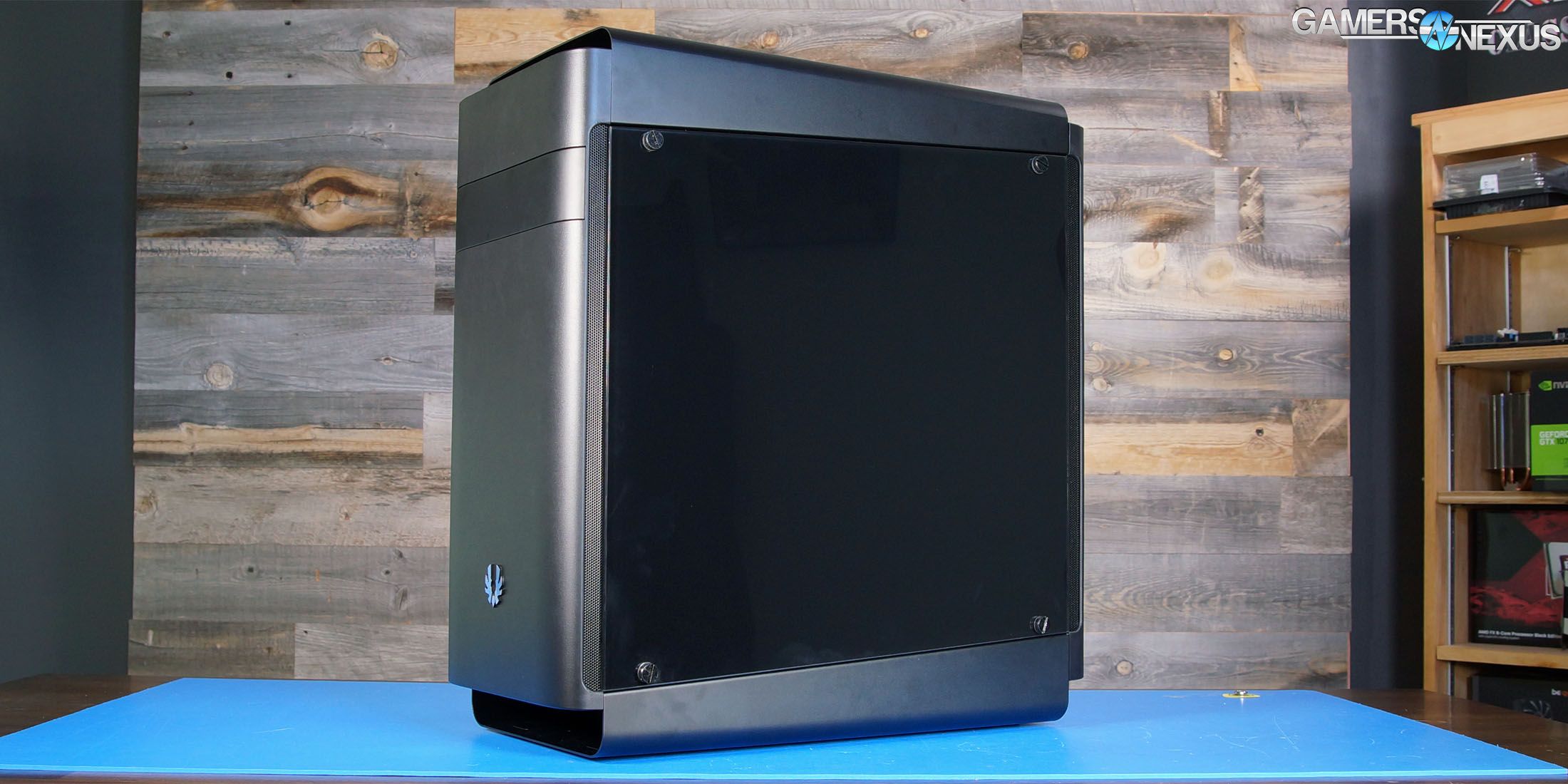 Much is made of the case’s RGB LEDs and ASUS Aura compatibility. An industrial-looking flat metal sheet with two recessed 2.5” bays forms a pseudo-shroud, and three RGB LEDs light each of the bays (surprisingly, they’re fitted with rubber washers to silence non-solid-state 2.5” drives). The strips of plastic intended to diffuse the light from these LEDs isn’t particularly effective, and each individual LED is clearly visible on the surface of the drive--this is a little underwhelming, but seems like something that could be fixed with a better diffuser (or diffuser) tape) and a little experimentation, particularly with brighter bulbs from BitFenix.

The upshot is that BitFenix takes their “quick custom design” philosophy seriously: the LEDs can be repositioned to the side of the drive, plugged into a controller in the case, plugged into an ASUS Aura board, turned off, taken out; in fact, the entire shroud is optional and can be cleanly removed, which it definitely should be during the process of building a system. The built-in case controller can be switched between seven colors, a rainbow setting that steps through every color, and off. 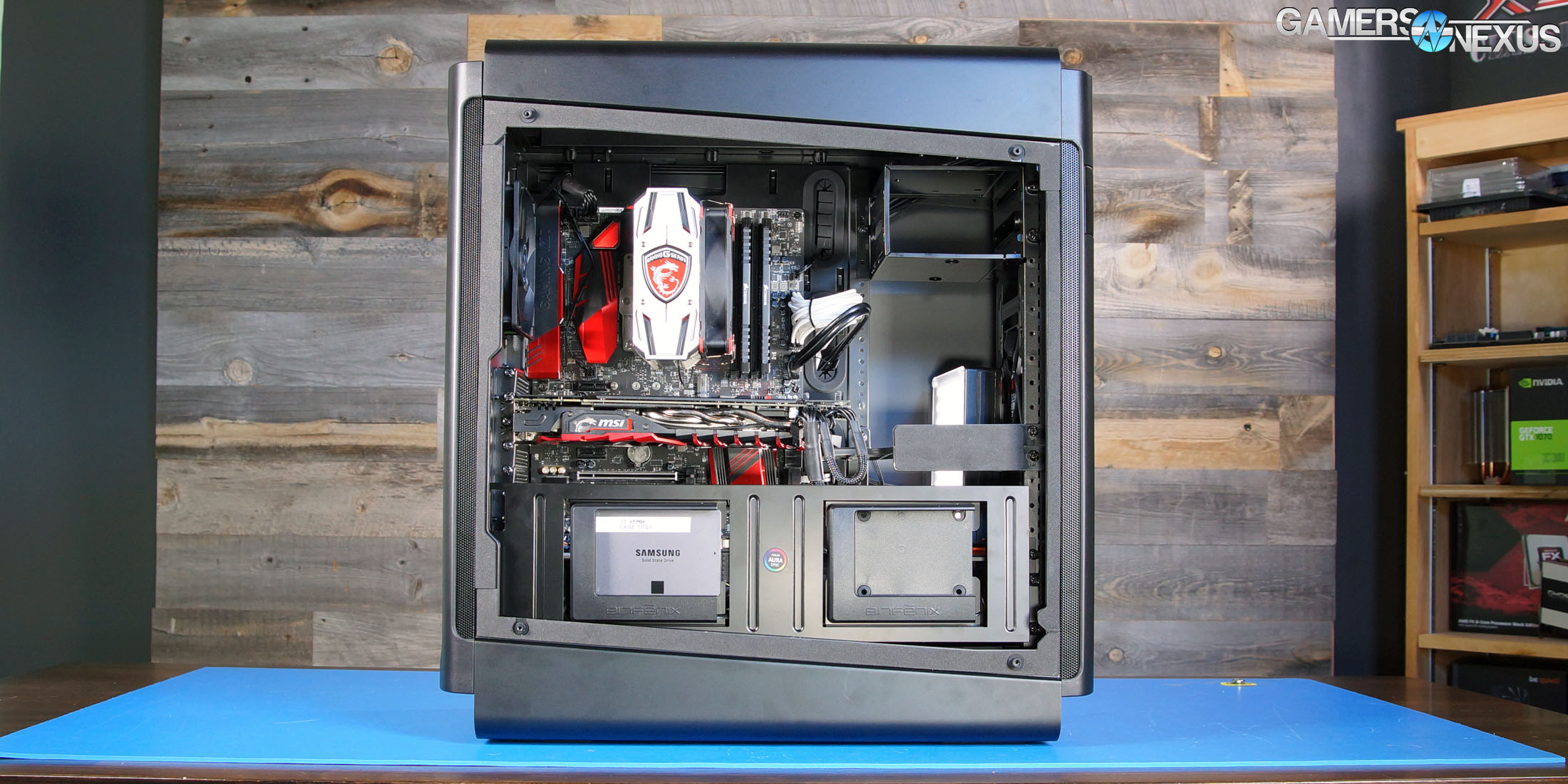 The other major “quick custom design” aspect of the case is the E-ATX shield. Cable cutouts in the Shogun are clearly designed around a full ATX board and many of them are behind the profile of a wider E-ATX form factor, but an additional five inches of shield (with cable cutouts and tie points) is included with the case and can be installed for easier cable management. There’s nothing stopping users from installing the shield even with a smaller board, except that it blocks the screw holes for most of the HDD cages and all of the VGA supports. Anyone with two or fewer 3.5” drives and a sturdy graphics card can opt to forego these in favor of installing the shield for a tidier look.

Drive bays were acceptable, but nothing special. BitFenix’s 3.5” drive sleds are easy to remove and use unthreaded pins with rubber grommets, which do their job well enough but are very fiddly to get into place with an HDD. We’d prefer to see a system where the pins are captive and can’t possibly fall out, like NZXT and other manufacturers now use. In addition to the two RGB 2.5” bays, there’s a drive sled at the bottom of the case and two more behind the motherboard. Notably, there is no 5.25” optical drive bay at all, despite the appearance of one on the front panel. This is purely cosmetic. There is a recessed section in the plastic at exactly the spot where an optical drive would be, except it’s instead covered by a sheet of metal and without an actual bay behind it. That said, demand for ODDs is low and it doesn’t hurt the value of the case not to include one. Most manufacturers have moved on.

Two long rows of screw holes run down the middle and front of the case, to be shared by the VGA supports and HDD cages; the sheer number of holes provided means that they can be adjusted to any height. BitFenix supplies three support shelves (and three HDD cages) – more than enough – and we found them pretty effective at supporting a sagging card. Only the biggest and heaviest cards actually extend far enough to make use of the shelves, and effectiveness will vary, but it’s a nice feature to have included with the case. 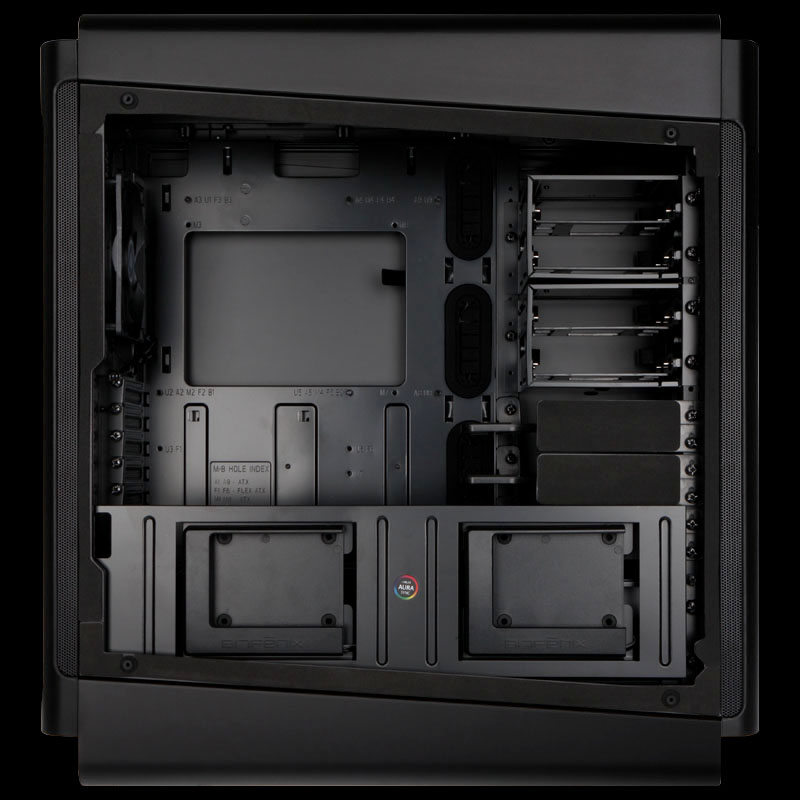 A thin metal tab on the E-ATX shield was bent on our review sample, but it didn’t affect installation and was easily corrected with pliers. Overall, the quality of manufacturing and tooling on the case was high, with one other minor complaint: some screws were overtightened, to the point of mashing screwholes out of shape on the VGA supports (and very minor cosmetic bending where they were fastened to the case). This didn’t affect any functionality in our sample, but seems a little excessive.

The Shogun wasn’t difficult to build in, but it was certainly time consuming. As listed above, there are a lot of pieces to figure out, and all of them are well secured with multiple screws. Cable management was a non-issue excluding the RGB drive bays, which require two cables for the LEDs (plus whatever SATA and power cables the actual drives require) to be routed from the front of the case to the back; however, all of this is obscured by the shroud in which the drives are mounted. Cable cutouts are generous, especially at the top of the case, where there’s massive headroom for radiator compatibility. The top metal arch and filter is fully removable as one piece, for easy motherboard/radiator access and washing the filter if necessary. The bottom arch is part of the chassis and cannot easily be removed.

Continue to Page 2 for the thermal & noise testing and the conclusion.