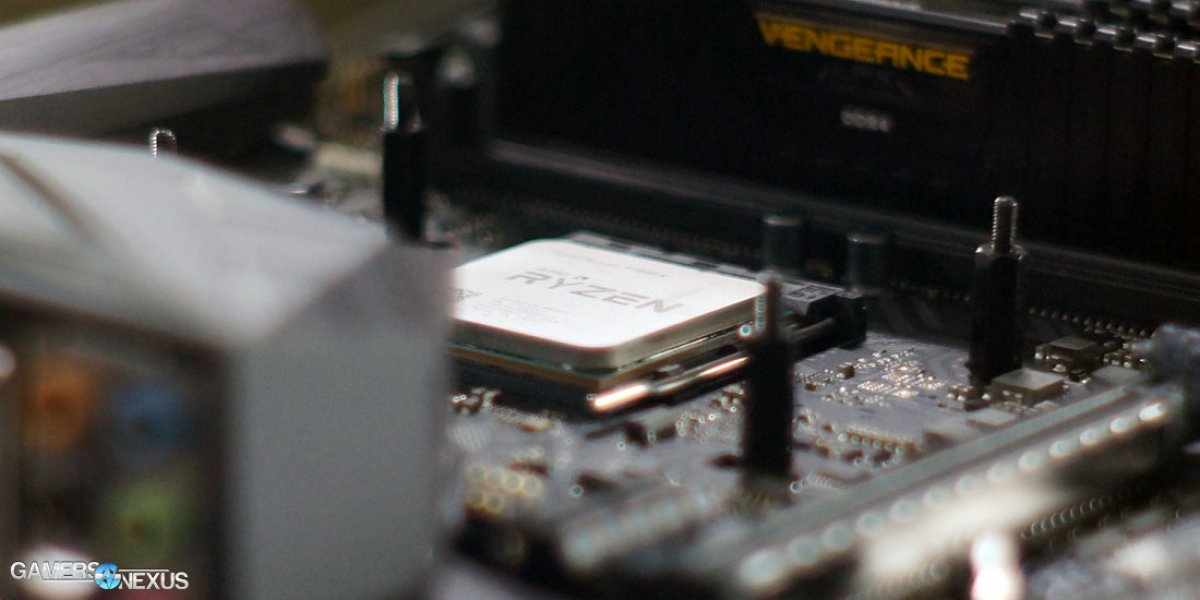 The 1700X performs as expected, given its flanks, landing between the R7 1700 and R7 1800X. All three are 8C/16T chips with the same CCX layout; refer back to our 1800X review for a more thorough description of the R7 CPU & Ryzen architecture. A quick comparison of basic stats reveals that the major advantage of the 1700X is a moderate increase in frequency, with additional XFR headroom as demarcated by the ‘X’ suffix. That said, our R7 1700 easily overclocked to a higher frequency than the native 1700X frequency, with no manual adjustment to voltage or EFI beyond the multiplier. The 1700X has a base clock of 3.4GHz and a boost clock of 3.8GHz, which theoretically means it could come close to the performance of our 3.9GHz 1700 straight out of the box while retaining the benefits of XFR (circumvented by overclocking).

In our tests, though, the stock 1700X was consistently and expectedly outperformed by the overclocked 1700. The point of interest, though, is the thermal performance of the 1700 and 1700X. The heat discussion has always been complicated with thanks to AMD’s temperature scale, as we discussed on Page 4 of the 1800X review and in a follow-up, but the 1700X does seem to run hotter even when considering tCTL offsets. We mostly determine this by looking at throttle performance, as the clock-rate will visibly dip when bumping against the maximum Junction temperature. We’re still a bit confused as to exactly what’s going on thermally, but are continuing to work on furthering an understanding of Ryzen’s temperature readings.

Before getting into testing, note the following: A new Windows 10 update has allegedly improved performance for some Ryzen benchmarks. We have not yet migrated our test platform to this update; we wanted to get the 1700X tested and reviewed under the same conditions as the 1700 + 1800X (testing was done prior to the Windows update). We’ll revisit these CPUs in more depth after a few more major updates get pushed for motherboards, Windows, and software. Right now, the environment is changing literally daily (we are receiving beta EFI versions nearly every day). To keep a stable test platform, we’re holding updates until a major content refresh for all of the chips. This may mean waiting until the R5 reviews for that bench platform refresh.

During testing, GamersNexus discovered that Windows would occasionally engage core parking or other power saving features that could impact framerate in some games, specifically with Ryzen. This was not always detectable, but some games reacted more than others (our biggest observable difference was ~4-5%). As such, all tests were conducted in performance mode. We further discovered that SMT toggling improves performance in nearly all gaming use cases, and so tested with SMT both enabled and disabled. When asked about this, AMD supplied that it is likely on the ISV optimization side. Learn more about that here.

We’ve been using the newest (and correct) version of AMD’s chipset drivers since we began testing, and we’ve been on ASUS’ version 5704 (latest available when testing began) BIOS for the Crosshair Hero VI. ASUS was good to provide us this update immediately when we reached out, though AMD officially distributed an older EFI version to reviewers; this older version is detrimental performance in some ways, as it was not the production-ready EFI. We have performed some EFI difference benchmarking, and will update once the next stable EFI version ships.

Fortunately, we had already retrieved the correct EFI from ASUS directly, and so did not have to test multiple EFI versions – though we did have to retest the platform and CPU multiple times for other validation. EFI version matters a lot in these very early days of Ryzen. This is an entirely new architecture – not some updated on a long-known design, like KBL was – and vendors were not prepared. Early EFI distributions were based on older uCode. Results will vary between test environments in greater ways than usual.

Because of how Ryzen’s boosting reacts to temperatures, we put the R7 1700X under the same liquid cooling we’ve used for all our major CPU reviews: the Kraken X62. This eliminates unpredictable thermal throttles during test.

NVIDIA 376.33 drivers were used for all benchmarking. Game settings were manually controlled for the DUT. All games were run at presets defined in their respective charts. All other game settings are defined in respective game benchmarks, which we publish separately from GPU and CPU reviews. Our test courses, in the event manual testing is executed, are also uploaded within that content. This allows others to replicate our results by studying our bench courses.