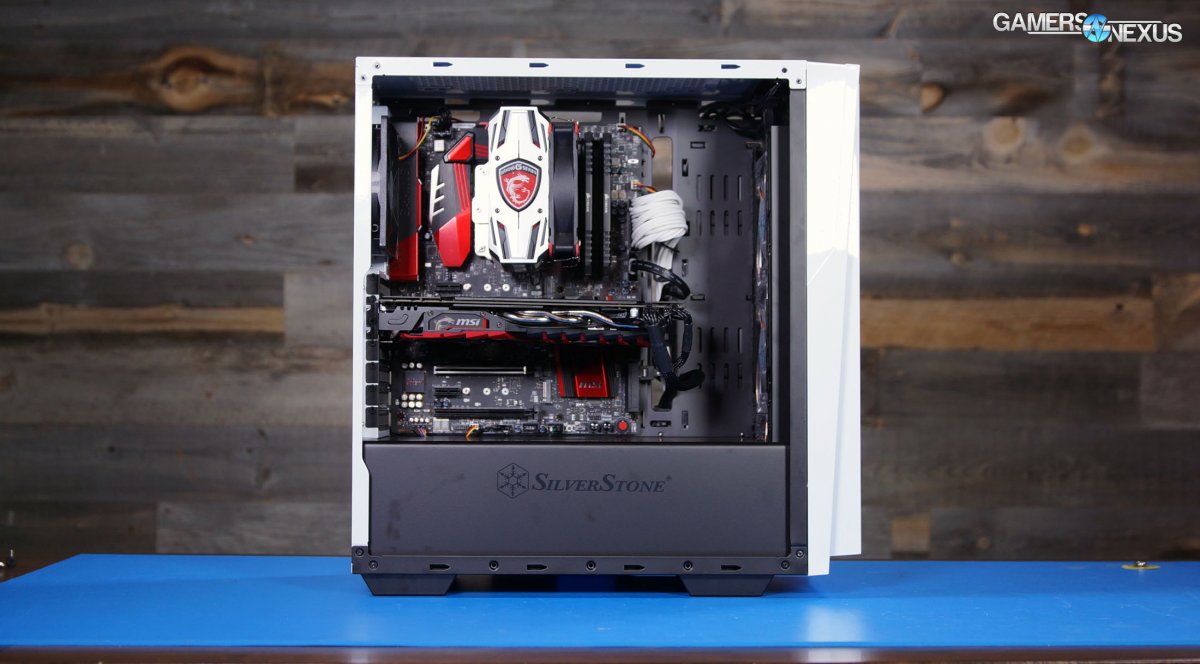 Installing components wasn’t as easy as it could have been, as there are several space constraints. Although there is an indented channel like the one we praised in our recent Fractal Define C review, it’s less for cable management and more for containing two 2.5” drive bays, which make it very difficult to route cables through this space when filled. There is an acceptable count of cable tie points, but they’re placed around cutouts in such a way that cables tied to them will be clearly visible from outside the case. There are also several tie points that are actually metal clips cut out of the chassis, but nothing special. Vertical space is limited by the chunky shroud, and it may be difficult to fit some plugs through the uppermost cutouts. The shroud’s size does mean that there’s plenty of breathing room for the PSU, however, and it did make routing cables underneath the motherboard and over the top of the PSU easier. It also means that it captures nearly all the airflow from the bottom 120mm fan and doesn’t smother hot HDDs. The PSU has to be slid sideways into the shroud (rather than inserted from the back) but there’s plenty of room to do so.

The RL06 is undeniably a budget case. At first glance, although there are no glaring flaws, there are tiny details everywhere that indicate cost saving: silver rivets on the back of the case are the only unpainted element, there are no rubber grommets anywhere, there are no thumbscrews for the expansion slots, there’s no removable frame for the PSU (like the S340 or 600C), and the side panels are held on with standard metal tabs. None of these affect the functionality of the case, and whether they’re worth the reduced cost is entirely up to the consumer.

As always, appearance is subjective, but it’s refreshing to see a case offered in a color other than plain black. The white LEDs in the front fans are a bright true white rather than the blueish tint that RGB LEDs produce, and the mesh front showcases them without allowing too much light through. The front panel is slick fingerprint-prone plastic, which isn’t a problem with our white case, but could be much worse on the black version. It’s also unfortunately molded in such a way that parts of it don’t quite fit flush with the side panel. The majority of nitpicks listed above aren’t visible when the system is fully configured, as long as some serious effort is put into cable management; if not, the large side window will show every single lazily routed cable brightly illuminated by the fan LEDs. 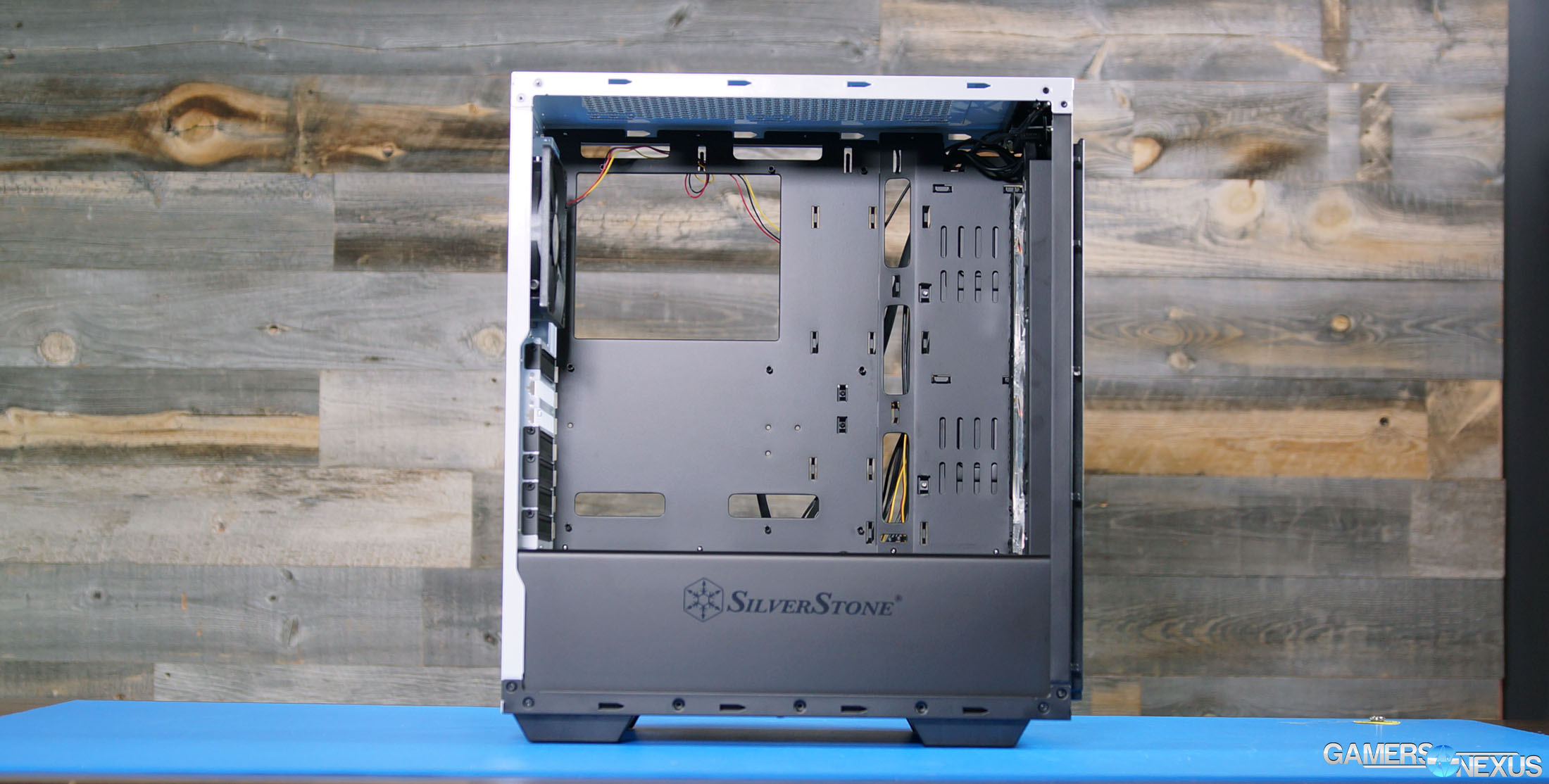 The three LED fans are high-quality: comparable SilverStone fans cost $12-$15 on Newegg, making the fans easily half the total value of the case. Many cases (the BitFenix Shogun comes to mind) include only a few cheap fans to bring down the retail price, but SilverStone has added value by including a sufficient number of fans that don’t need to be swapped out immediately. There is an integrated fan hub behind the motherboard, but there’s no speed control on it. 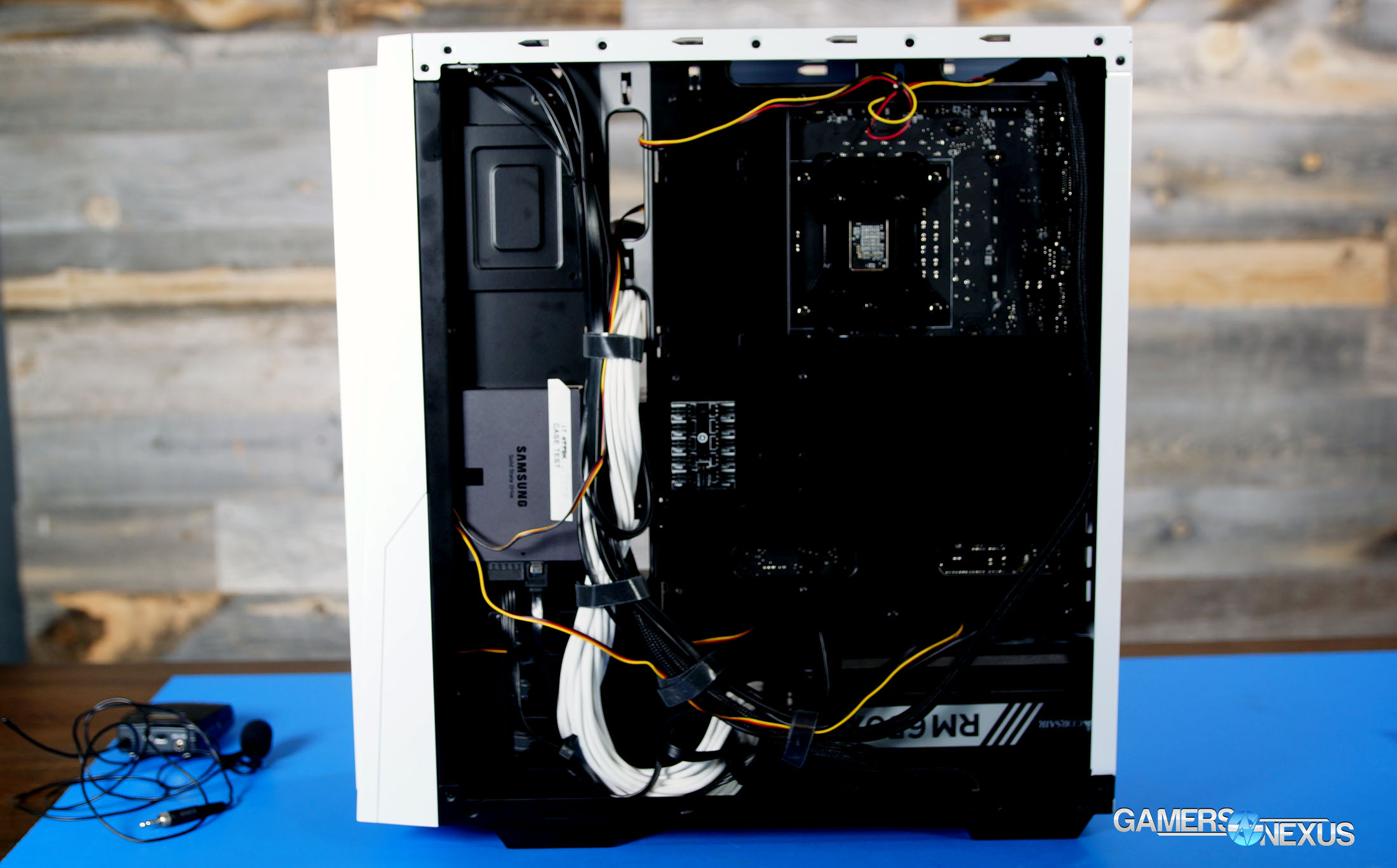 We’ll discuss thermal performance more below, but SilverStone isn’t messing around with subtle “side intakes” or anything like that: air goes in the front, there’s clear positive pressure, and it covers every component in the case without obstruction. It’s a pity, then, that the bottom filter is so flimsy. Whereas the front intake has a reinforced filter covered by a protective mesh, the PSU intake has a plain square of mesh simply clipped to the bottom of the case, which is impossible to remove and replace without flipping the case on its side. The top filter is another square of mesh but attached using magnets, but given the positive pressure, it shouldn’t really need to do anything.

The kind of temperatures recorded in the RL06 are something that can only really be gotten from pointing three unobstructed high-rpm fans right at the motherboard and blasting it with cool air. Each of the three 120mm intake fans is capable of roughly 1400RPM, while the rear exhaust fan peaks at 1000RPM.

SilverStone’s RL06 is the coolest case on our bench for CPU thermals, entirely thanks to its mesh front. This seems to be a fading trend in modern case design, but still provides the best intake cooling – no matter how big a gap is used for front-side intake. 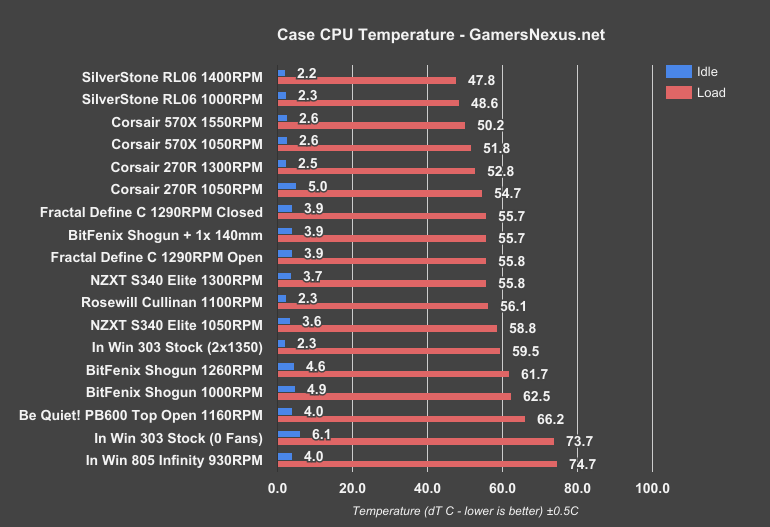 With case fans configured to their maximum RPM of 1400, the SilverStone RL06 enables our tower cooler to keep the CPU at 47.8C delta T over ambient when under 100% load, with idle temperatures around 2C delta T over ambient. Because performance was so strong with this case, we lowered RPM to 1000 and ran the test again. Even with this slower speed, the CPU maintains a delta T value of under 50C – in fact, it’s cooler than the 570X, which was previously our performance leader. This difference emerges because the 570X uses a giant glass panel in front of its intake fans, though compensates in ways with large gaps on the sides and with high fan count and high RPM. The next case behind these is the 270R, another Corsair design, with the Fractal Define C serving as the coolest of the quiet cases.

SilverStone is a clear performance leader in CPU thermals of the cases we’ve tested thus far.

We’re also experimenting with a more real-world Blender rendering test, as opposed to our normal torture stress test. CPU dT reached 21.75C when rendering on the GPU and 34.4C rendering on the CPU. It may be hard to interpret these numbers without comparative data, but we’re slowly adding to this data with tests going forward. 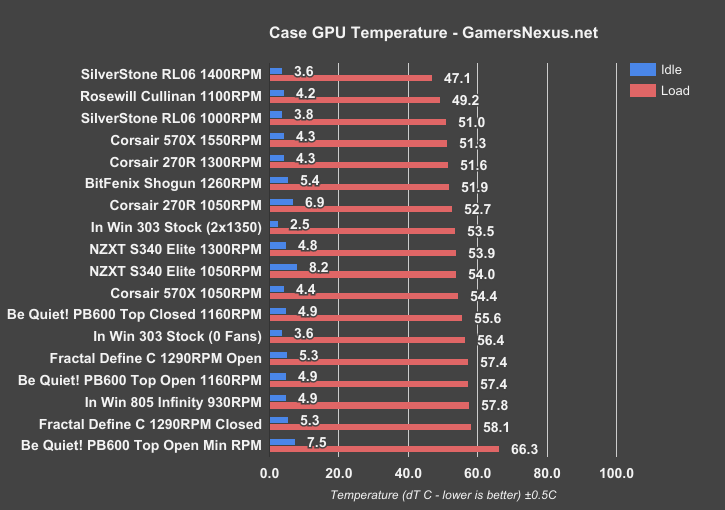 GPU performance testing on our dual-axial Gaming X at 55% fan speeds also found the RL06 in the lead. The 1400RPM configuration places us at 47.1C delta T, followed closely by the Cullinan’s 1100RPM configuration. The Cullinan positions its front fans in a way that more directly point at the GPU, helping it take this second-place spot. The 1000RPM RL06 follows the Cullinan, reducing noise levels while maintaining 51C delta T over ambient.

In our Blender tests, GPU dT reached 24.7C when it was used to render and 3.6C when the CPU was used. 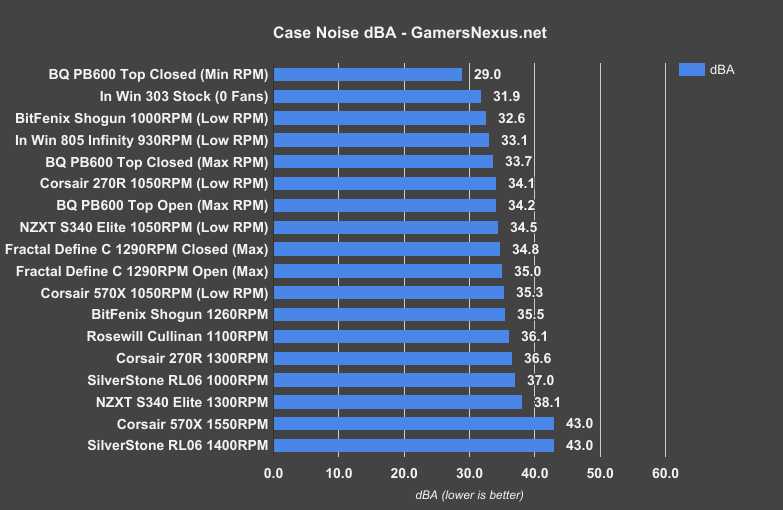 The RL06 isn’t technically the loudest case in our current lineup, but it’s tied for that honor with the 570X at 43dBA. The front panel is entirely mesh, and there’s no attempt made to muffle noise: this case has twice the fans of many enclosures we’ve tested, and they’re running faster. At 1000RPM, the noise drops to a more manageable 37dBA, a bit under the S340 Elite, but still clearly audible. 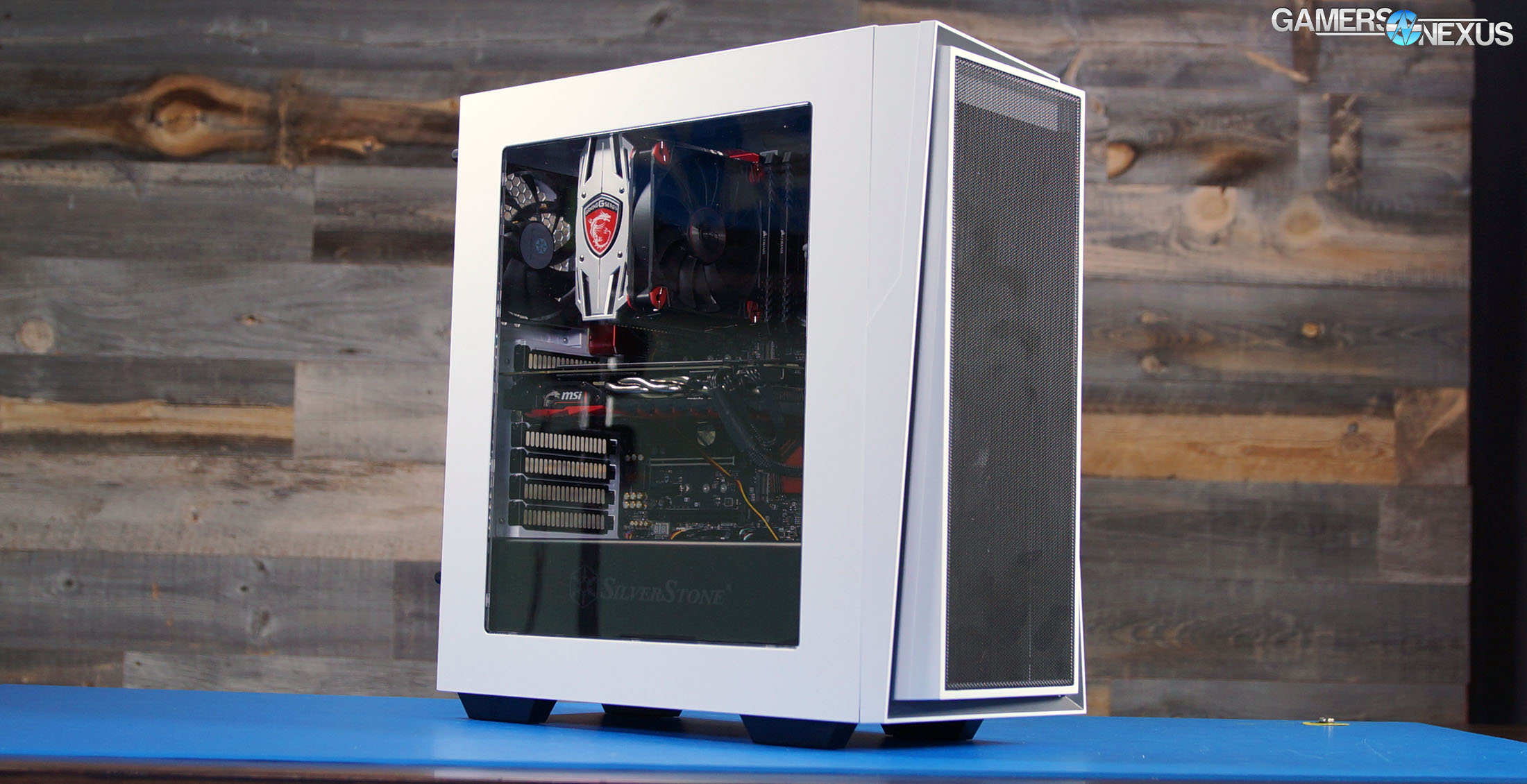 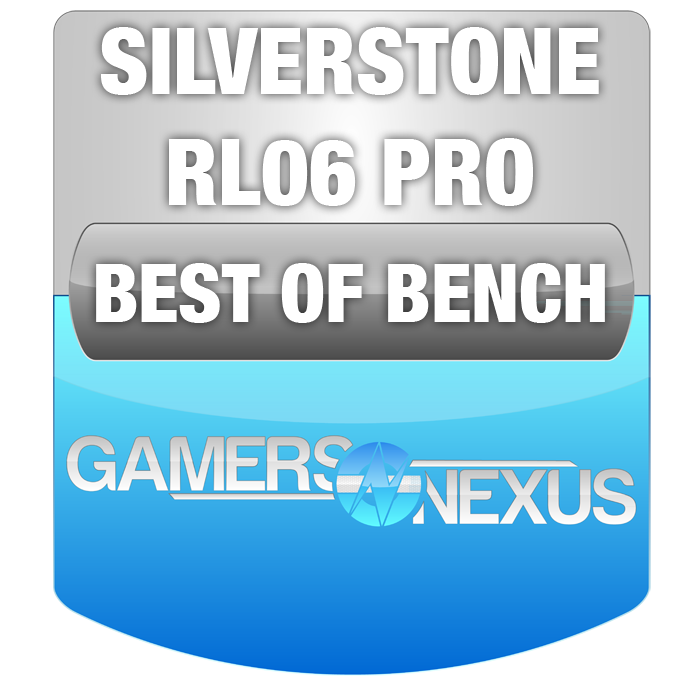 A large part of case reviewing comes down to personal taste, but we try to be a little more objective by including quantitative tests of thermal and acoustic performance. The RL06 has a clean appearance and the white LEDs are nice, but the materials felt forebodingly cheap compared to the more expensive cases we’ve reviewed recently. After the thermal tests, though, it’s clear that SilverStone are all business. The RL06 has no frills (other than the LEDs), but it does have amazing thermal performance straight out of the box for a reasonable price, whereas several other cases we’ve recently reviewed have focused more on noise (or have cheaped out on fans).

The RL06 is an excellent buy for cooling-focused builders working with a sub-$100 case budget. If noise is the most important aspect of a build for you, skip this one. If not, it’s a good buy at ~$75.