The ASUS Strix cooler is fairly straight-forward: The baseplate covers only key areas, like the VRAM, with the right half of the cooler taking care of VRM components. The baseplate is secured by several screws on the top side of the PCB, rather than using screws only in the back half of the card like most vendors do. This means that removal of the shroud consists of unscrewing two back-side Phillips screws, the four retention screws for the heatsink, and then some force. The baseplate is secured by two screws in the expansion cover, four screws around the GPU (top of the PCB), and several longer screws also on the top-side.

ASUS’ cooler is clearly less intense in its utilization of aluminum and engineering than EVGA’s ICX solution, but that doesn’t instantly make it worse: the stuff that’s being cooled matters, clearly, as do default fan profiles (something EVGA’s been routinely aggressive with). ASUS has a different VRM design from EVGA’s same-priced FTW3, which we detailed electrically here, opting to use the voltage controller used on nVidia’s FE card and a doubled 5-phase VRM (using IR3555 60A power stages). 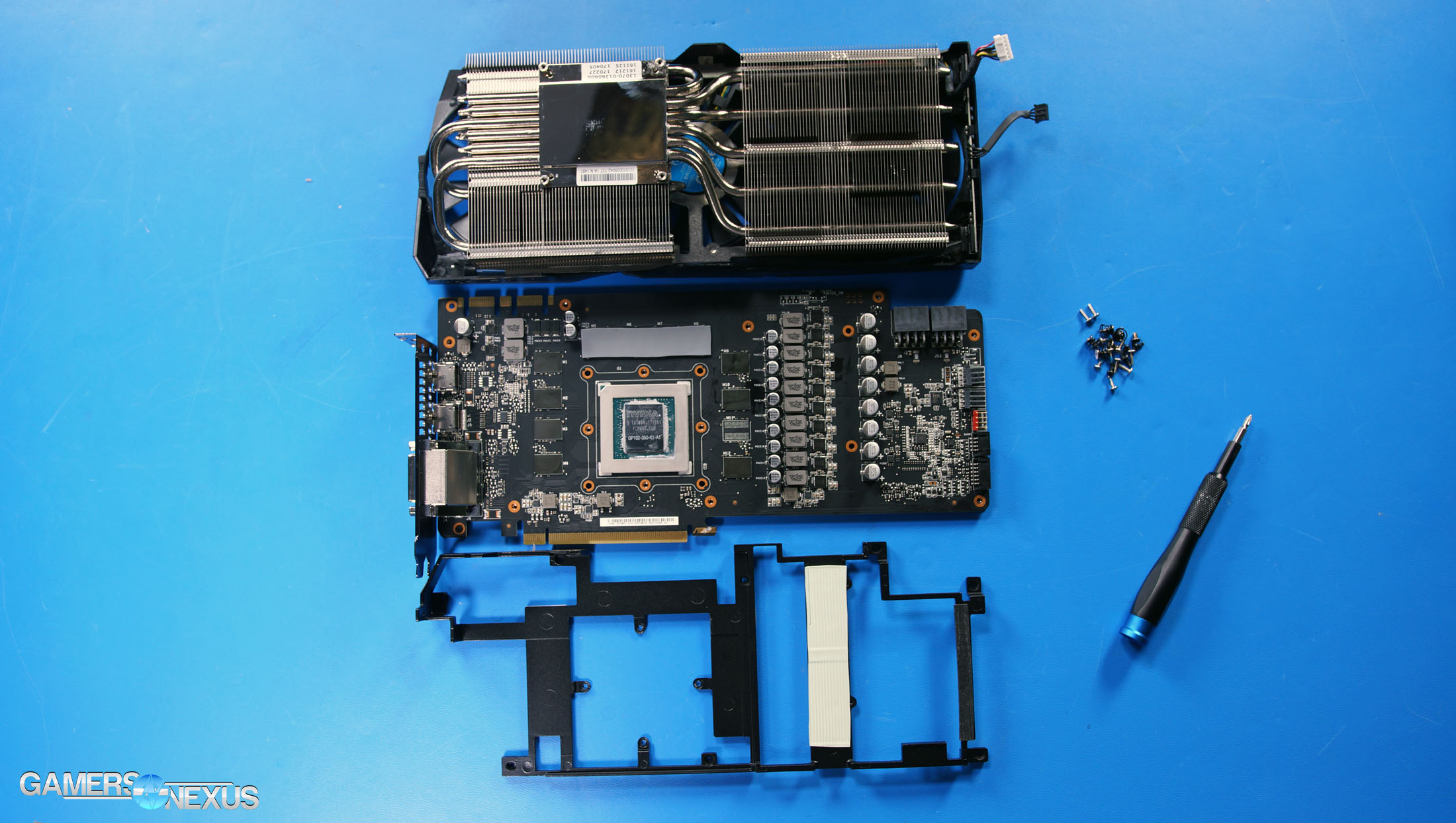 The cooler is fairly straight-forward: There’s an aluminum baseplate that’s simply flat and contacting VRAM, two finstacks over the GPU and VRM, and 6x6mm heatpipes running through the heatsinks. ASUS uses straight fins rather than the new L-shaped design that EVGA’s been touting. The only difference is that, theoretically, the L-shaped fins provide additional surface area for a wider contact patch to thermal pads, but still allow for airflow. A straight fin allows all the airflow, but has a more limited contact patch with the thermal pads. In our final ACX VRM analysis, we found that thermal pads contacting straight fins do actually help quite a bit more than no contact at all, but the L-shaped design does improve this. Whether or not it’s relevant, of course, is a different story. VRMs can take a lot of heat – easily 125C, in most cases – and don’t really need special attention. It’s not a bad thing and helps with efficiency, but also not necessary.

Anyway, the ASUS Strix version of the 1080 Ti is priced at $780, meaning it’s among the most expensive two GTX 1080 Ti cards we’ve reviewed. The other would be the EVGA GTX 1080 Ti FTW3 (review is located here), with the rest of the packing landing at $750 (or $700 for the FE model). Stock frequency isn’t really a relevant thing to talk about with these cards, seeing as they just boost to whatever the thermal + power limits allow, anyway, but ASUS is going with 1708MHz boost - OC mode or 1683MHz boost - gaming mode.

Pascal means that we’re inevitably restricted in stock and overclocking performance, as voltage is regulated to a maximum of ~1.093v (to protect longevity of the silicon), despite the VRMs being capable of well over that target. This means that video card purchases should hinge almost entirely on thermal and acoustics performance, seeing as gaming performance is going to be effectively the same on all reasonably built 1080 Ti cards. Overclocking isn’t much of a differentiator, either.

For that reason, we’re focusing almost exclusively on thermals and noise for this review. The rest just doesn’t matter, plainly, as gaming performance is identical to everything else (within reason). The only real difference is in FE-type cards, where a thermal limit is encountered prior to other limits. This is resolved by converting it in to a Hybrid or running higher fan speeds.