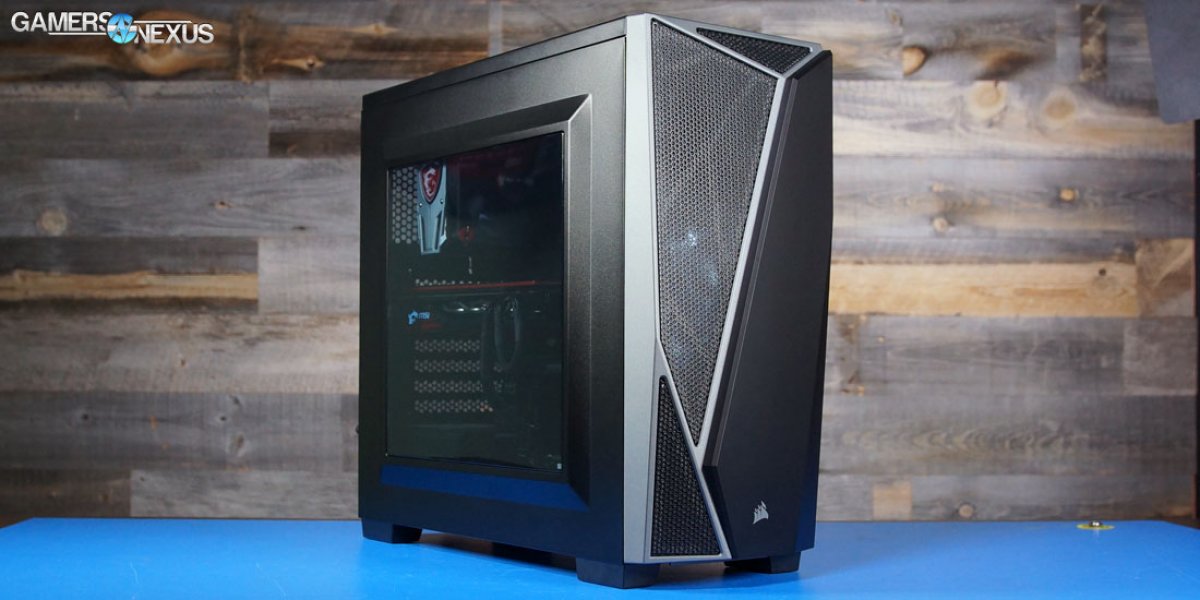 The SPEC-04 is an incredibly light case, easily carried in one hand. 4.2kg is much less than the other mid-towers we’ve reviewed lately, approximately 1/3 the weight of the hefty Bitfenix Shogun, and correspondingly easy to lift out of its packaging. Weight is one way to add perceived quality to components, but lightness is welcomed during the building process: flipping the case over and moving it around was trivial, unlike some other recent cases. The thinness of the steel is noticeable, but not a problem as most parts of the case are bent in such a way that it’s reinforced.

Clearance is minimal in most areas. The MSI CPU cooler we use for case testing barely fit under the edge of the chassis frame, and although the side panels are convex in the center and do allow some additional space, our cooler was positioned at the less roomy margin. It did fit, but since we don’t remove the cooler (for consistency between tests), it made it difficult to angle the motherboard into place. Even without that policy, the lack of height above the motherboard would have made it difficult to install a cooler from inside the case. There are no cutouts above the motherboard, and the only route available for our CPU power cable was a cutout behind the actual board that squashed it against the chassis. Best to pre-wire that. Elsewhere in the case, cutouts are generously distributed along with plenty of cable tie points. There was very little room for cable management, so cables had to be tied down securely in the center of the case to take advantage of the convex side panel.

Front I/O is minimal: there are only 2x USB ports -- 1x 3.0 and 1x 2.0, and the standard 3.5mm in/out jacks. The I/O is mounted to the chassis on the non-windowed side of the case, keeping the outward-facing side clean and presentable. The USB ports are connected via a single cable which plugs into a 3.0 socket on the motherboard. 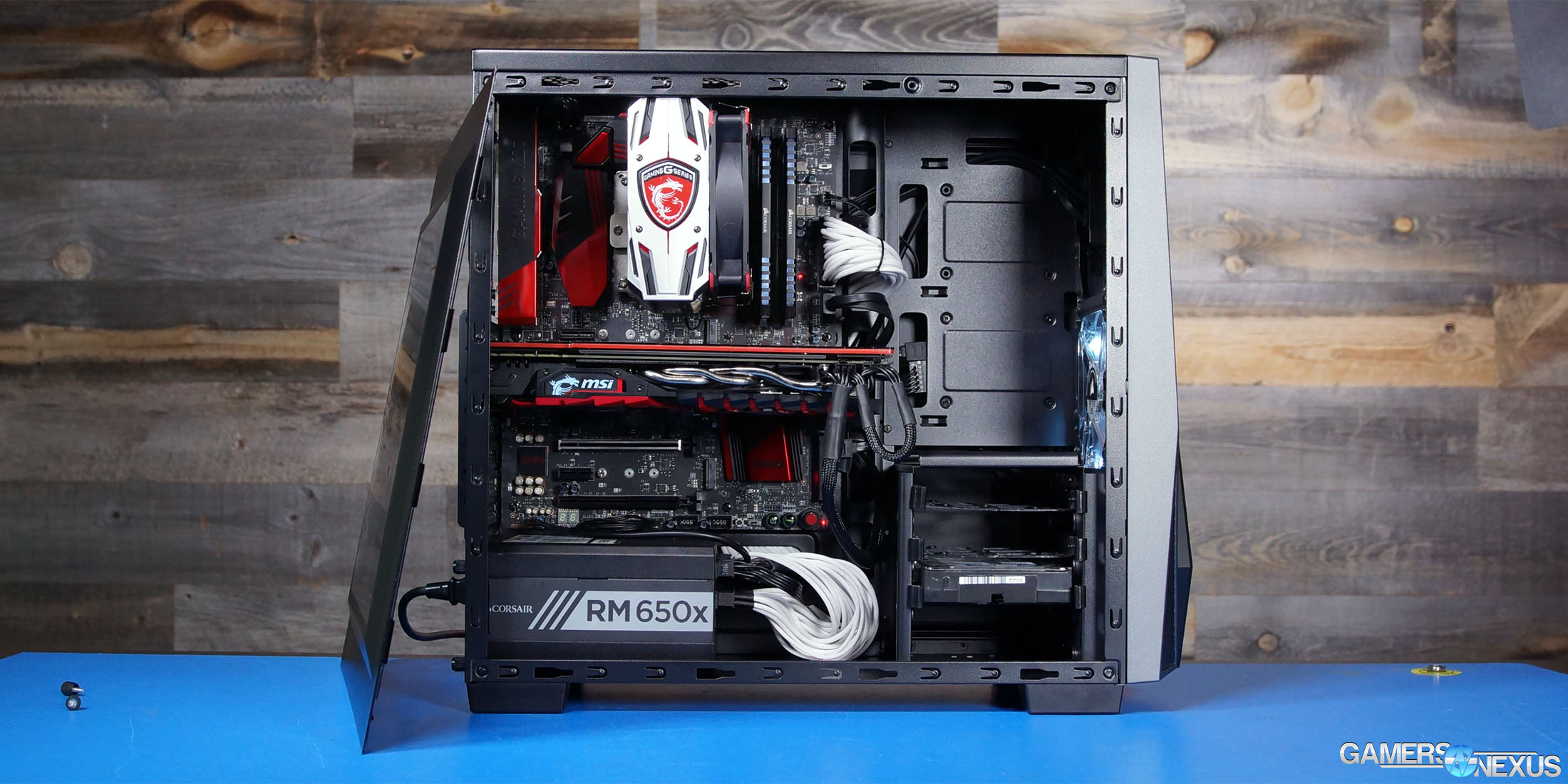 Expansion slots screw in externally, a somewhat uncommon feature among the cases we’ve reviewed. This causes a small protrusion on the back of the case, but primarily it makes the slots blessedly easy to reach with a screwdriver and without cross-threading risk. Hard drive and SSD installation was also easy; the 3.5” bays are tool-less and the cage can be fully removed, although Corsair doesn’t make a big deal about this, presumably because customers buying a $50 case will want to use a hard drive. There are actually four 4x 3.5” slots, but only three drive sleds are included.

The skeleton of the SPEC-04 is identical to that of the SPEC-01, but without the 5.25” optical drive bays, making space for one more fan mount than its ancestor. Corsair doesn’t advertise three front intake slots as (unlike the 01) using the bottom-front slot requires removing the HDD cage, leaving only a couple 2.5” mounts. This gives Corsair’s case the potential fan capacity of Silverstone’s excellently cooled RL06, but packaged with only one to Silverstone’s four. The fan we received maxed out at about 1300RPM. 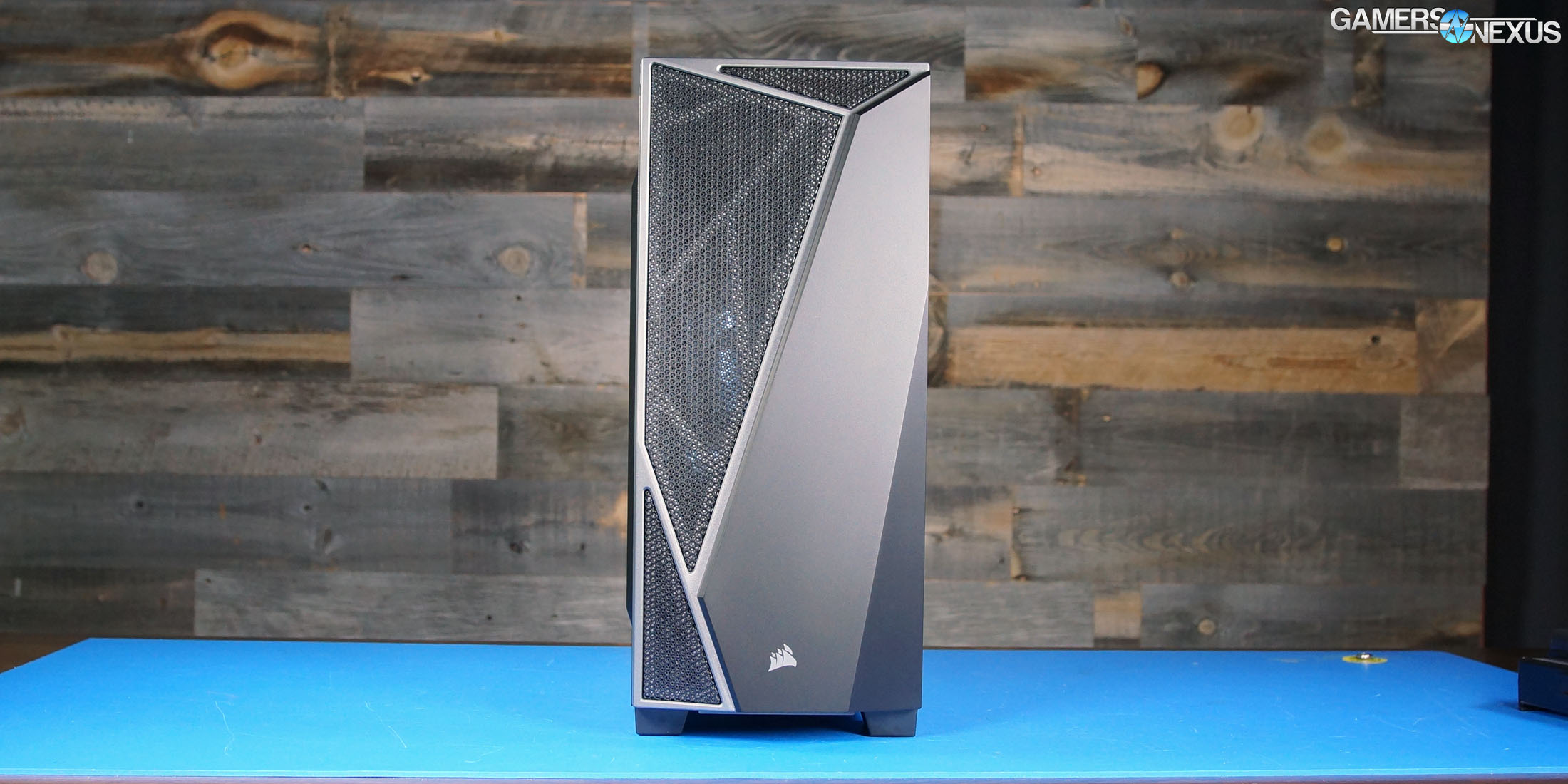 The exterior is clearly following in the footsteps of Corsair’s angular SPEC-ALPHA, but with a skeleton and pricetag identical to the SPEC-01. The side window is fairly large and takes advantage of the lack of optical drive bays to extend farther than it could otherwise, and it’s tinted (despite being plastic), reducing glare from the white LED fan. Users can form their own opinions on appearance, but I personally dislike the lack of symmetry in this and the ALPHA: it looks more decorative than functional, and it makes me concerned about the amount of air available to the intake fans (see below for actual results on this). The ALPHA style has quite a few advocates, though, and this case was made for them.

Our new testing methodology includes real-world workloads, like Blender on the CPU, Blender on the GPU, and 3DMark - FireStrike Extreme (1440p) Stress test. The Blender passes use GN's in-house CPU benchmark render scene, with one pass rendered entirely on the CPU and the next pass rendered entirely on the GPU. During the CPU render pass, we set the GPU fan to 25% (minimum manually tuned duty cycle). During the GPU pass, we configure the fan speed to 55% (the VBIOS average high when under load). This prevents unpredictable fluctuations. 3DMark serves as our gaming workload, providing a 1440p workload on both the CPU and GPU. These two tests are in contrast to our torture scenario, which looks at worst case performance.

Continue to the final page for in-depth thermals, noise, & the conclusion.