Our approach to reviewing the MSI GE72 7RE gaming laptop has been more drawn-out than normally, as we’ve individually run tests for FPS performance and for the impact of pre-installed software on the machine. Today, we’re combining all of those numbers into our final review of the MSI GE72 7RE notebook and its 1050 Ti & i7-7700HQ hardware, coming to an ultimatum on the product as a whole.

The MSI GE72 7RE Apache Pro runs a 17.3” display, making for what is an abnormally large form factor for a 1050 Ti, and is able to accommodate a larger keyboard as a result. It’s not a perfect keyboard, as we’ll discuss in the video, but it does have a numpad and most standard keys. This larger form factor is also critical for the sprawling cooling solution, which makes use of the additional area to spread out its heatpipes and dual-fan cooling. It’s a trade-off, as always: A bigger laptop does mean better cooling, but a 1050 Ti does sort of seem the perfect fit for a 14-15.6” machine. From experience, we can say that you won’t be opening this display in an economy seat on an airplane – but if that’s not how the laptop is being used, you end up with what is still a slim, fairly light option. 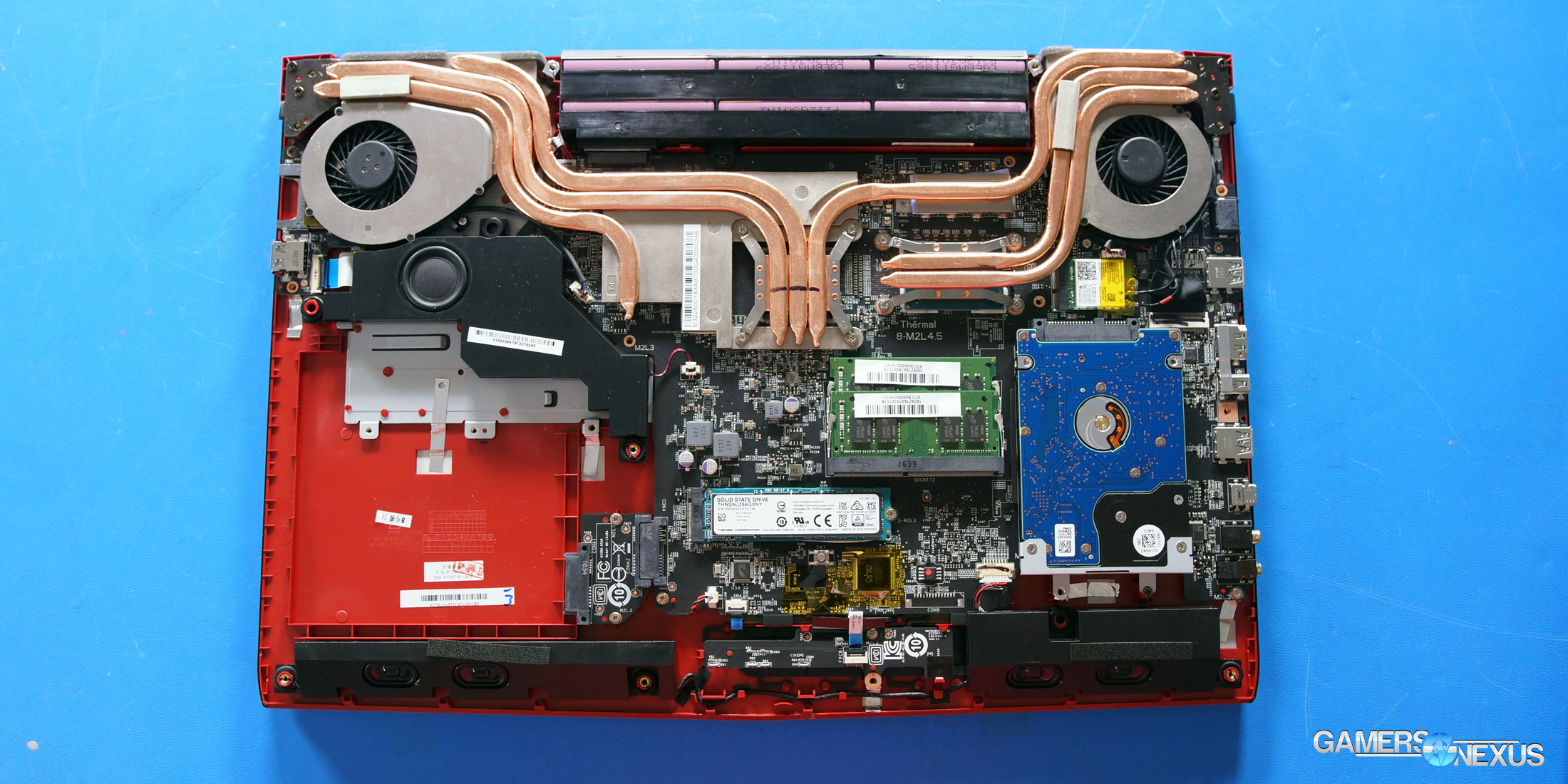 If we ignore MSI’s reluctance to remove the “Warranty Void” sticker and focus instead on the actual hardware, we quickly learn that this laptop is one of the more serviceable units on the market. The width, in addition to helping with cooling, also gives us wide-open access from one panel. Most of the components can be accessed after removing the back panel, including the CPU, GPU, memory, M.2 and 2.5” devices, and the fans. MSI deserves praise for designing a unit that’ll be easy to maintain, seeing as notebooks could all live a bit longer if only their owners could more readily clean the cooling solutions. Sadly, that praise is redacted, because it’s got a “warranty void if tampered” sticker covering a screw hole.

The notebook uses one fan on each side, both radial, for dissipating heat collected by pipes running to the CPU and GPU. Each piece of silicon is cooled largely in dependently, though the GPU does sprawl out a bit more and share with the CPU/SOC cooling solution. MSI has also tacked-on an aluminum plate for their VRM components, which we often see neglected in laptops. This is another good move by the company’s thermal team.

Repasting the hardware would be trivial, if ever needed, as would be a cleaning on the fan blades.

This cooling solution does flank the battery, though, which cuts down on total battery capacity. We’d like to see MSI kill the optical drive in the future, then push the cooling out in that direction. This would free-up space for a larger battery, which we feel the GE72 7RE is sorely lacking. A ~110-minute run-time for office tasks isn’t great.

Time to move into benchmarking, now that we’re starting to throw numbers around. Keep in mind that we are not revisiting the bloatware testing, as we were already pretty clear on our opinions with that. MSI also responded to the bloatware concerns, for the interested. For now, we’ll just say this: If you buy it, wipe it clean.

We ran two games on loop for thermal testing in real-world scenarios: DiRT Rally and Metro: Last Light, as both are easy to configure for endless looping and are reliable in logging.

For this first Metro chart, we see CPU temperature climbs until it hits about 80C – ambient is represented at the bottom of the chart – and we see frequency sticking to roughly 3400MHz for the entire test. There are no clock drops here, so no thermal throttling occurs on the CPU. Cooling is reasonable given the small form factor of the laptop, though the stretched-out body does help spread that heat over a larger area.

GPU cooling has us at around 68-70C in this particular test, which shows us dropping about 50MHz off the GPU clock as time carries on. Not too bad overall, actually, and pretty good thermal performance when considering the CPU and GPU are sharing a cooling solution. It does get a bit loud, but we’ll talk about that next.

As for DiRT, we see the CPU running at about 72-75C, with the GPU running at about 65C. There’s no thermal throttling on the CPU, with limited clock reductions on the GPU. This more or less confirms our previous results. The “spiky” CPU performance is in between loads and is expected behavior. 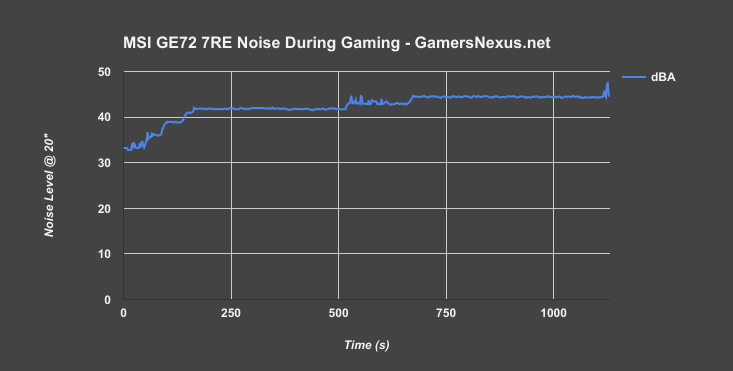 This chart shows the fan curve ramping over time. The test was conducted over about a half-hour period, allowing a gaming workload to run on loop for the full 30 minutes while plugged in. As is shown clearly here, we’re seeing the fan curve ramp quickly into the range of 45dBA, where idle operation sat closer to 32dBA. The noise floor is about 26dBA. The laptop’s fans run loud when gaming, but that won’t be a problem if using headphones; it will, however, be a bit of a problem if trying to use speakers or if the fan ramps up in a more public setting – you’ll get some glances for the whine.

This is something that MSI is working on with the new Max-Q laptop spec from nVidia, where nVidia is sort of enforcing a 40dBA noise output from laptops. Regardless, for the GE72 7RE in its current form, expect about 42-45dBA when gaming and about 32dBA when idle.

For office tasks, with all the bloatware removed, we saw a battery life of about 109 minutes when running PC Mark Office on loop until death. The tasks include spreadsheet management, a lot of word processing, and some video playback that would be comparable to YouTube viewing. Gaming battery life is closer to one hour.

FPS benchmarks were already shown in a separate article, but we’ll recap them briefly here.

Here’s a summary of the 1050 Ti’s results, without comparison to other laptops. We’ll recap those in a moment. Generally speaking, the 1050 Ti and i7 combination is perfectly adequate for 1080p gaming on a notebook, particularly considering our tolerances for FPS are looser with laptops. The lower power consumption and form factor receives greater importance than increased performance, in a lot of cases. We’re running at least high settings on everything and seeing good performance.

Comparatively, as we show in this old Mordor benchmark, since laptops are loaners and we don’t hang onto them, the 1050 Ti outpaces a 970M and sits behind a 980M. The GTX 1060 is a fairly sizable upgrade, what with its 32% performance uplift, but may not be necessary for everyone. We can see this scaling continue fairly linearly in other games, too, like our Black Ops III benchmark – the 1050 Ti lands between the 970M and 1060 – and our deprecated Overwatch training test. We’ve since replaced that with bot match testing, though, detailed in our separate Overwatch Graphics Optimization guide.

If you want the rest of the FPS numbers in more depth, check the previous 1050 Ti laptop benchmark video, as that spends all its time on these numbers.

Laptops are more subjective than most things we review, but still require a high level of objective analysis.

Subjectively, the 1050 Ti does seem best suited for a smaller notebook – but for people after a larger screen with a lower price (because the GPU is lower tier), this makes that compromise. Perhaps less subjectively, we’d like to see battery life improved – especially for what is already a wide-bodied notebook. The cooling solution is impressive and performs excellently overall, but that performance is afforded by eating away the battery compartment – there’s not much space for the battery. Weakening the cooling solution or shuffling around the internals, like removing the optical drive, would permit a larger battery to exist within the notebook.

Gaming performance is perfectly adequate. Our standards are lower for framerates and frametimes on a laptop, given that we’re ultimately worried about where to compromise. The thinner form factor is afforded by the lower TDP components, but those same components can still sustain a ~60FPS throughput with higher graphics settings. The higher-end GPUs aren’t really necessary for 1080p gaming and would increase price, size, and require greater power.

MSI has done a few things right and a lot of things wrong. What they’ve done right, though, is the hardware: The cooling solution is well-built, the form factor is good, the chassis is easy to get into and repair, and the unit remains relatively portable despite its hefty copper. What they’ve done wrong is largely software related, and can be resolved with some patience. Uninstall everything or install Windows fresh, then go from there. It’s not bad once these steps have been taken, and boot time halves (from ~40 seconds stock to ~18 seconds clean).