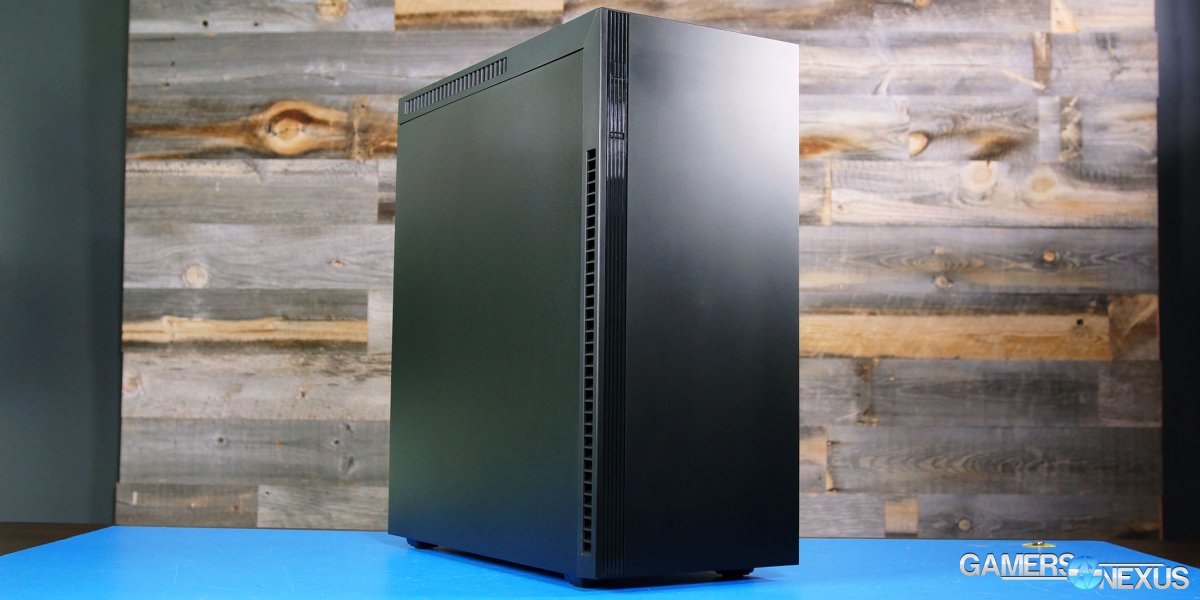 The SilverStone Kublai 07 (a.k.a. the SST-KL07B, in keeping with SilverStone’s difficult-to-Google naming conventions), is a relatively inexpensive competitor in the silent mid-tower category typically occupied by Fractal and Be Quiet! Cases.

Today, the SilverStone Kublai KL07 is on the bench for review versus the Fractal Define C, Be Quiet! Pure Base 600, NZXT S340 Elite, and several other recent case launches. We’ll be looking at noise and thermals primarily, with some additional focus on ease-of-installation and build quality.

The KL07 follows the current trend of smooth, blank exterior surfaces, with the exception of some Fractal-esque side vents and decorative grooves wandering across the front and top panels. Power and reset buttons are hidden within these grooves, leaving a seamless surface except for the I/O panel (including USB type C) and a nearly-invisible SilverStone logo at the bottom. SilverStone has experimented with flashy plastic panels on cases like the Primera 01, but there’s none of that here, and neither is there a side window--windows are a compromise on cases that claim to be noise-damping, and the target audience likely won’t miss it. 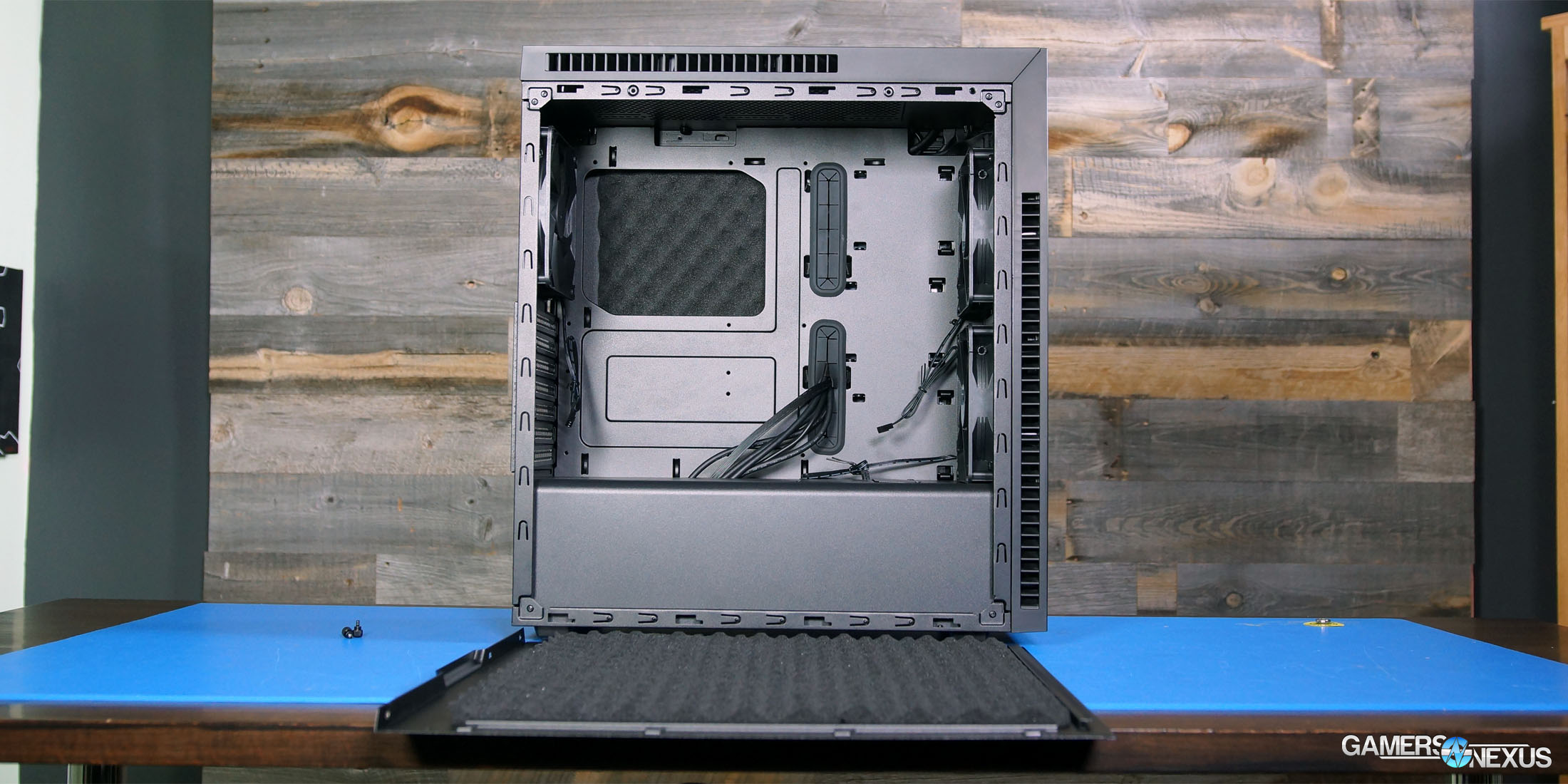 Upon removing the side panel, the layout and overall build quality of the case appeared similar to the Redline 06 we recently reviewed: serviceable, but plain, with the addition of some rubber grommets and real non-bendy cable tie points. On closer inspection, the Kublai 07 offers a number of additional conveniences to justify its higher price, even beyond the noise damping.

The two 140mm fans that come preinstalled in the front of the case are mounted on a removable frame, making installation much easier without the need for awkward screwdriver angles. The magnetic quick-detach front filter is an extremely fine mesh, but even the best dust filters can’t catch everything, and the frame should make removing the fans for cleaning a bit easier. The separable fan cage can only mount two (120/140mm) fans, but there are mounting holes for up to three 120 or 140mm fans on the actual chassis, making the frame completely optional. There is another less-fine magnetic filter included on the top of the case, but if exhaust is directed upwards then this should be removed. 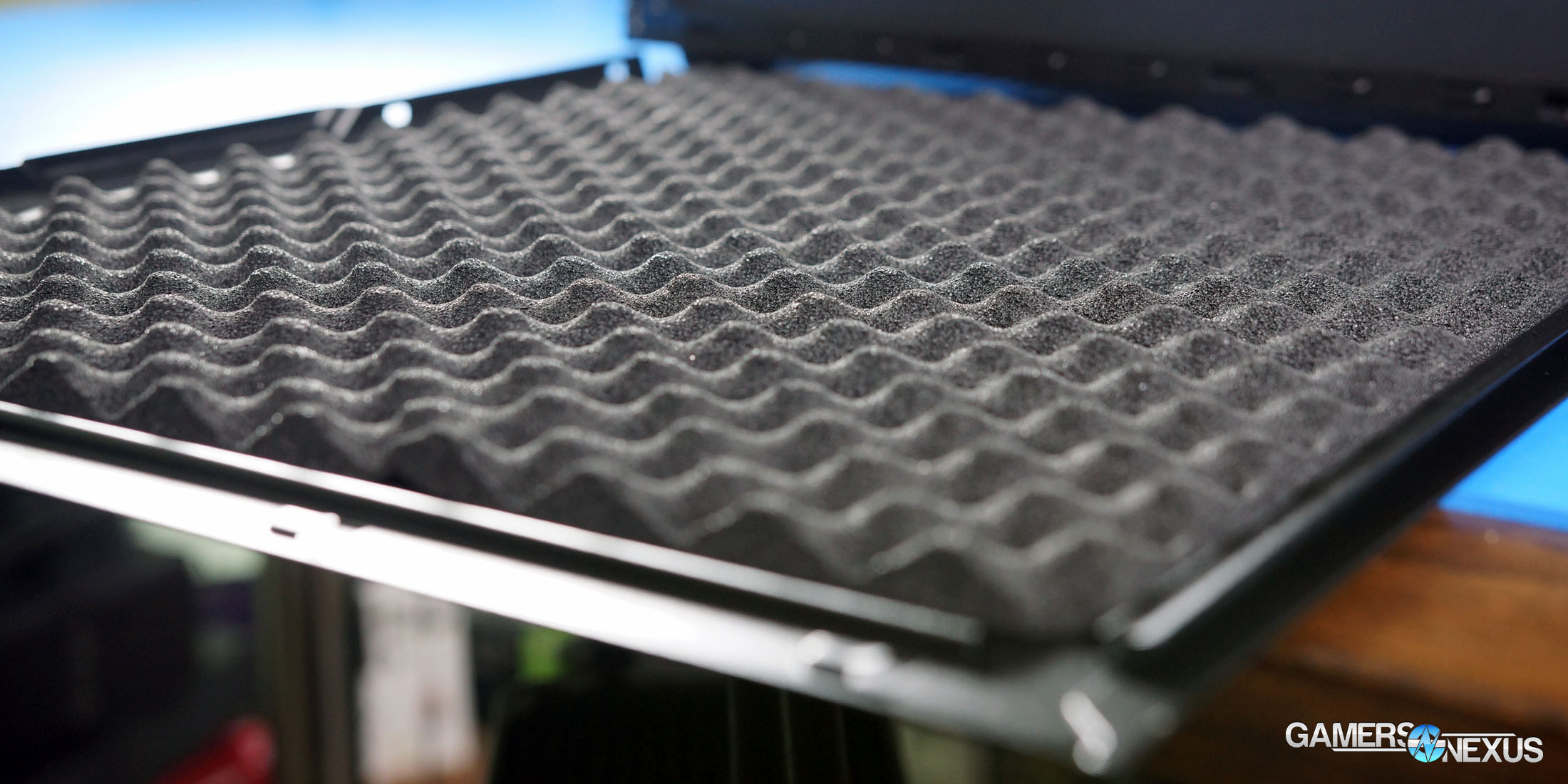 A section of the shroud must be removed to fit that optional third fan. By default, one wall of the hard drive cage is screwed into this section, but both walls of the cage can be moved or completely removed to fit this configuration. This is the only area of the case where the machining was a problem: the cage wall was taller than the shroud and forced the removable section to pop up visibly. We chose to remove the cage rather than move it closer to our 160mm long Corsair RM650X PSU, for fear of bending the cables, and users that would like to use the front-bottom intake fan and 3.5” drives at the same time shouldn’t install a PSU any longer than that.

The three toolless SSD bays behind the motherboard are cleverly made, if a bit fiddly. There is only one possible orientation for the drives, with the SATA power header at the top right (pointing towards the rear of the case). The bays are securely attached (they could be pried out for extra space) to the chassis by hinges which allow them to swing out and accept a 2.5” drive, like popping in a cassette tape. This may not add much in the way of functionality, but it feels satisfyingly efficient, and they’re well placed for cable management. There’s no messing about with screws, and the toolless bays even offer a little clearance for heat dissipation. Unfortunately, the middle bay is prevented from fully swinging out by a rubber grommet underneath, and possibly the top one as well if cables are routed over it.

As mentioned in our SPEC-04 review, external PCIe card attachment is a feature we like to see: it doesn’t make for the cleanest profile, but the screw holes are guaranteed to be easily reachable without any weird cutouts or machining. The KL07 goes a step further with an oddly elaborate little hinged door that holds all the PCIe covers in place without the use of screws. We did use a single screw to support our heavy MSI GTX 1080, but being able to flip open a door and have immediate access to every PCIe cover was a treat during installation.

The shroud is generously sized for PSUs in both height and (depending on the placement of the hard drive cage) depth, and in the interior of the case there are plenty of cutouts positioned to the top and right for ATX-width motherboards. Cable management behind the motherboard isn’t the best: despite almost 2.5cm of clearance, much of this is occupied by acoustic foam, and cables placed here rather than inside the shroud will mash the foam flat. A large portion of the foam is cut out to avoid contact with the motherboard and cooler mount, granted. Inside the main chamber, paying attention to the maximum CPU cooler height of 163mm and the maximum expansion card width of 165mm is important to avoid contact with the foam.

As mentioned earlier, the KL07 is a noise damping case: SilverStone claims that in operation, it can be “eerily silent” thanks to layers of acoustic foam on four of six sides (not the bottom and rear). This is 1cm thick wave-patterned foam rather than the more typical flat-with-pinholes foam that Be Quiet! and Fractal use, which potentially affects thermals as well as noisiness. This theoretically helps break up the soundwave as it collides with the foam, primarily useful for minimizing high frequency noise. Low frequency noise will have an easier time escaping the enclosure, but the only effective way to stop that is with thick case materials – like 2-3mm thick aluminum, as used in some In Win or Lian Li enclosures. This helps deaden lower frequencies. Still, SilverStone’s approach to deaden high frequencies is a noble one, seeing as coil whine, fan whine, and pump whine all tend to be in the higher frequency spectrum. At some point in the future we’ll be doing more serious tests on acoustic foam, but for now, we’ve done our standard decibel measurement with the fans at maximum RPM. 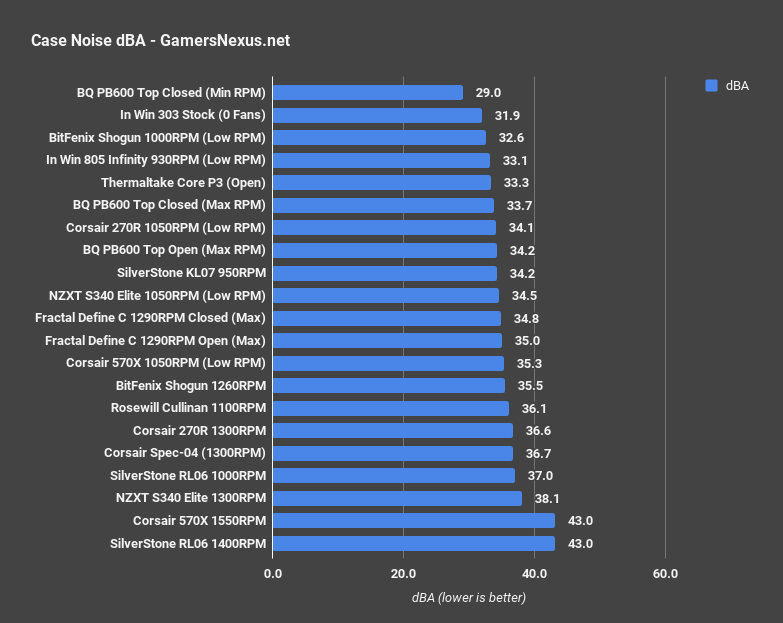 By the decibel metric, it’s effectively equal to the near-silent Pure Base 600. The Fractal Define C technically places “loudest” of the three on the chart, partly thanks to higher RPM and an un-muffled side window, but is effectively the same volume to the human ear. With low-RPM 140mm fans and near total foam coverage, the KL07 is on the better end of our noise chart and compares respectably to the other the noise dampening cases we’ve reviewed.

As seen in the Pure Base 600 review, however, insulating noise can come at the cost of insulating heat. Even the top panel is coated with 1cm thick foam that could impede airflow, and the KL07 must rely on its three preinstalled 140mm fans to make up for this. 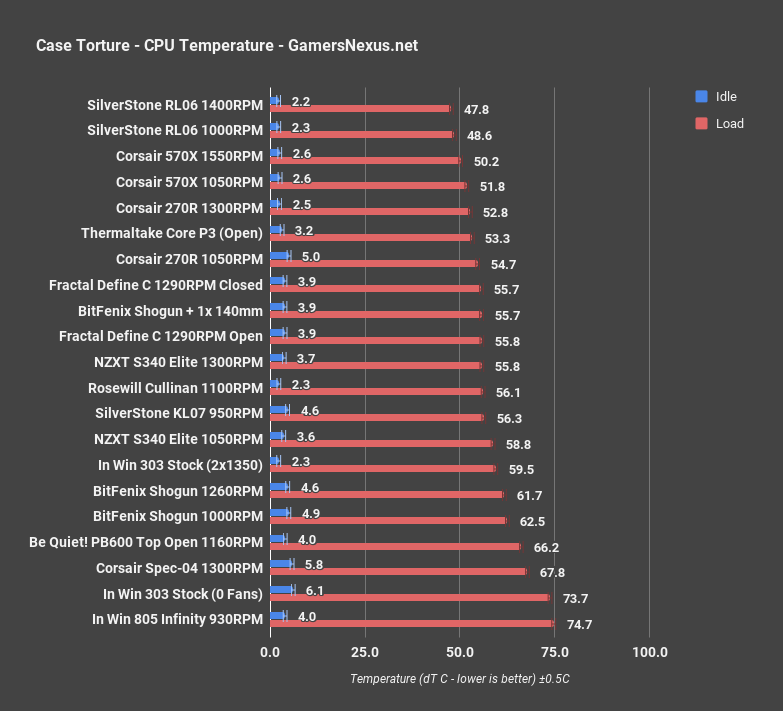 CPU dT during the torture test reached steady state 56.3C, in the range of respectable but not exceptionally well-cooled cases, alongside the Rosewill Cullinan and the (1050 RPM) S340 Elite. The CPU didn’t overheat or experience throttling, but the KL07 does have the unfortunate burden of being compared to SilverStone’s typically well-ventilated cases. It doesn’t even come close to the RL06’s impressively low 47.8C CPU dT under load. Compared to the Fractal Define C, the KL07 operates about the same – 56.3C dT versus 55.8C dT is within our +/-0.5C window of variance. 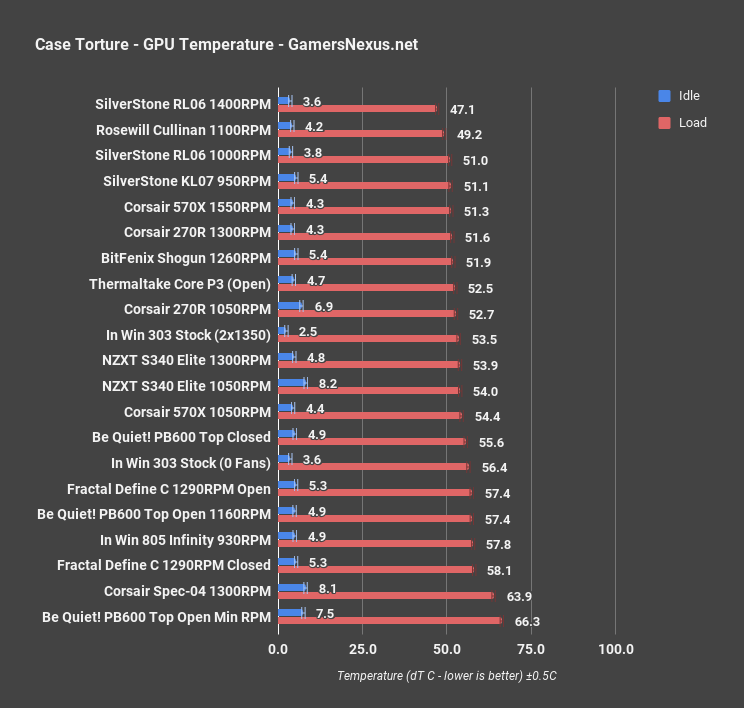 For GPU temperatures in the torture workload, the KL07 benefits from an intake-heavy design that funnels air into our dual-axial Gaming X 1080, with GPU dT reporting at 51.1C load, or about equal to an RL06 with similar fan RPMs. The 570X, 270R, and Cullinan are also nearby. Compared to other silent-focused cases, like the Fractal Define C at 57.4C dT or the Be Quiet Pure Base 600 at 57.4C dT, the SilverStone KL07 does well here.

Blender rendering gives us a real-world look at performance. Starting with a CPU render, the KL07 operates a CPU temperature of 38.9C dT over ambient when rendering, with the GPU warming up to 6.9C as it is hit by exhausted heat from the CPU. We only just started these tests, so don’t have a ton of data yet. Compared to the RL06, we see an increase in thermals of about 4C – not bad at all.

Looking next at GPU rendering temperatures, the KL07 keeps the video card to 27.5C dT, which is 10C cooler than the entry-level Spec-04 – a case that throttled us in some tests – and a bit warmer than the RL06.

Based on the limited comparable data, the KL07 appears to have handled Firestrike Extreme stress testing very well, with a 0.8 degree higher GPU dT than the P3 without dropping the frequency below 1900MHz. We may need to adjust this test in the future if throttling becomes common, but it was not a problem for this test. 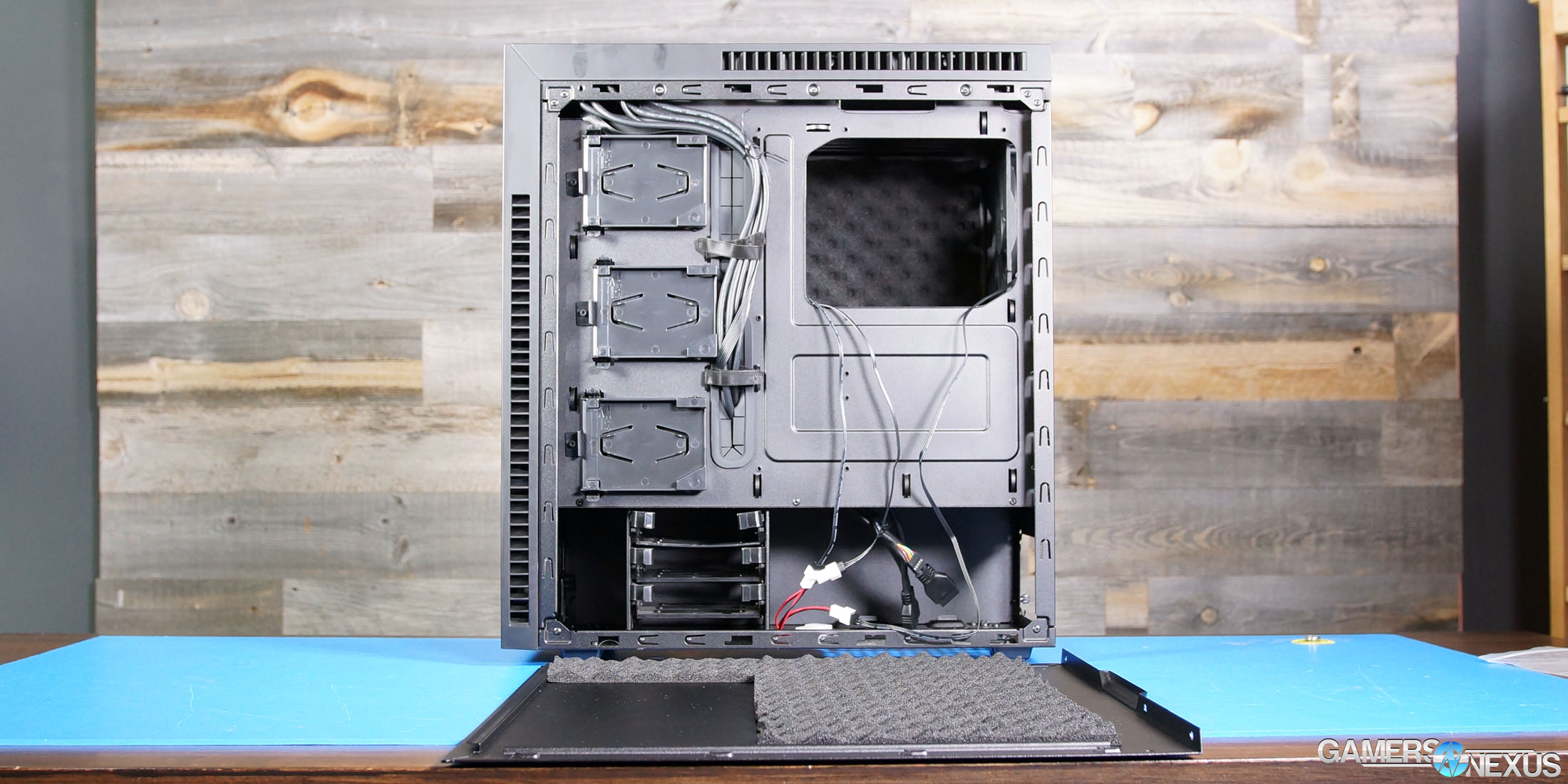 The KL07 is a jack of all trades that tries to combine noise suppression, airflow, and a budget price, and does an OK job at all of them. Someone who really wants all three aspects should consider the KL07, which won’t disappoint--but if not, there are better options for cooling- or noise-focused builds. For those who don’t care much about noise, there are cheaper cases with better cooling, like SilverStone’s own RL06. For those who only care about silence, there’s Be Quiet!’s entire lineup. The Fractal Define C is also a close competitor--going strictly by the numbers, the KL07 outperforms the Define C in thermals equals it in noise output for $5 less, but the Define C won our Quality Build award for its solid and well-planned construction, including better cable management.

As a balanced enclosure that splits itself between noise and cooling performance, the SilverStone Kublai KL07 does exceptionally well.