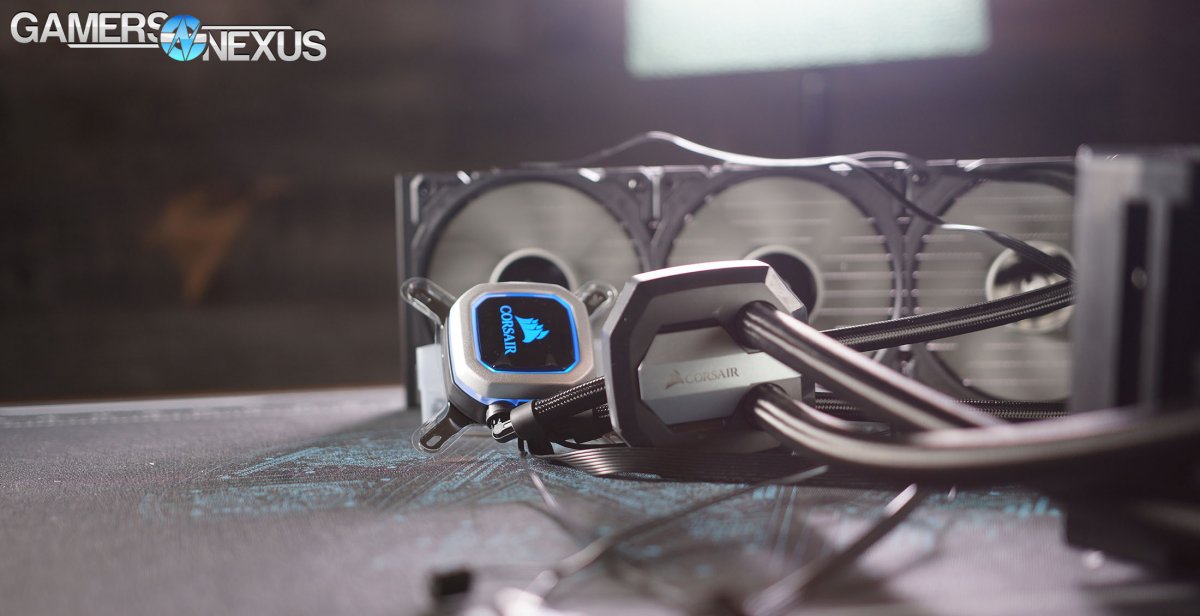 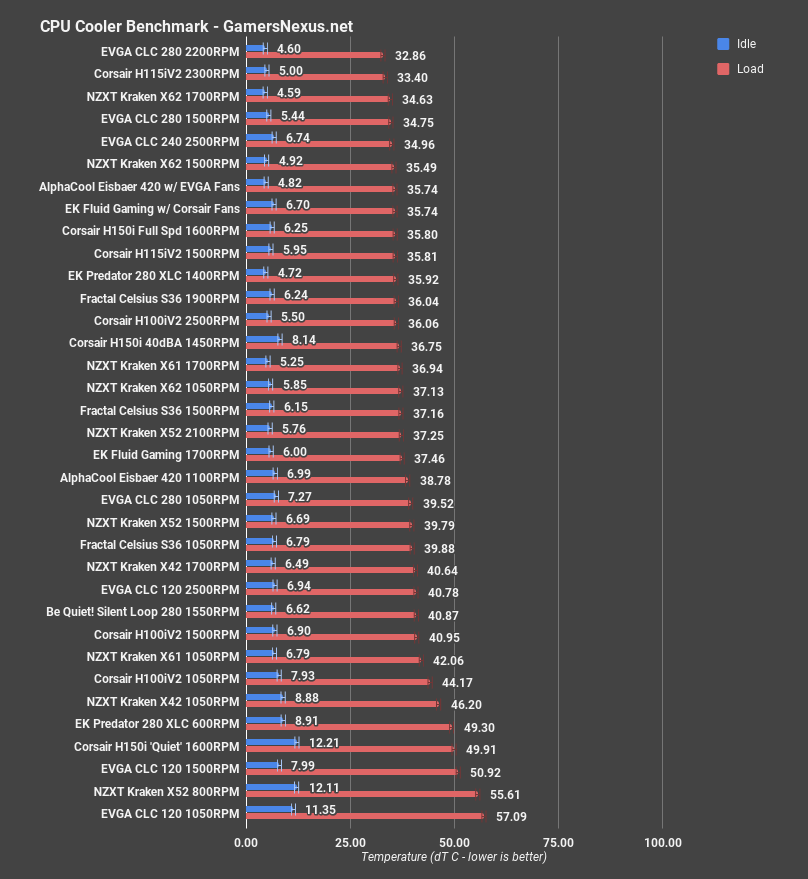 Let’s start our thermals with flat-out performance, then move on to noise-normalized performance testing. Our focus here is fans and pumps at max speed, though we do have lower RPM numbers present. We’ll give noise-normalized tests more focus in a moment.

For now, we’re seeing the Corsair H150i right around levels of the H115iV2 at 1500RPM, or the Eisbaer 420 with high RPM fans. Keep in mind that test variance places everything within the 34.5 to 36.5-degree range as functionally equal. Also keep in mind that appreciable differences are lacking at this point, as it is rare to gain significantly from an extra one or two degrees reduction in temperatures. GPUs are, perhaps, the primary exception, particularly in high overclock scenarios.

Regardless, the Corsair H150i maintains an average idle temperature and sits toward the upper quarter of coolers. Because the H150i focuses more on operating quietly, thermal performance isn’t a leader until normalizing the other coolers for the same noise levels. Most of the thermal performance you’re seeing thus far can be attributed to limited thermals gains generationally in the Asetek solution, with Corsair’s medium-speed fans contributing the rest of the performance differential.

Setting the pump to “quiet” mode, by the way, results in significantly warmer temperatures – the H150i moves down to 49.9 degrees Celsius over ambient for load temperature, or 12C for idle. This is an increase of 14 degrees from the high-speed pump, and is repeatable. To be fair, though, “quiet” does significantly reduce pump speed – the reported rate falls from 2800RPM to around 1100RPM. 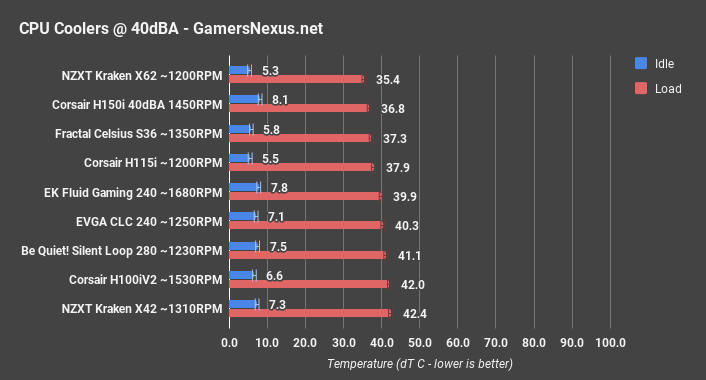 Looking at noise-normalized performance at 40dBA, the Corsair cooler is able to leverage its larger 360mm radiator size, keeping temperatures to about 36.8 degrees over ambient load, landing Corsair near the top of the charts.  It is within margin of error of our X62 and Celsius S36 measurements, making these three units functionally equal in our testing. Corsair is able to spin-down to a 0RPM operating mode, if no load is on the system, and can sustain idle or simple browser-like processing without spinning up, which further aids the noise argument. 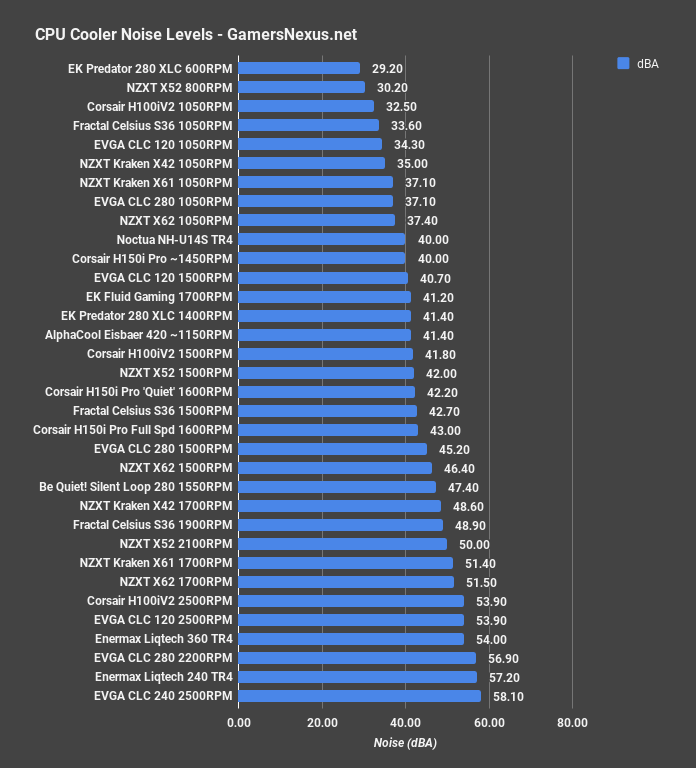 For full system noise, with passively cooled components (other than the CPU) and a noise floor of 26dBA, the Corsair unit measured out at around 43dBA on our meter, making it one of the quietest coolers when operating at its maximum speed, while still retaining some level of thermal performance. It’s certainly not the most impressive cooler on the bench, particularly in price-to-performance value, but it’s a mid-pack competitor that performs average thermally for its size, or above average for noise.

The pump is responsible for making a good deal of noise, and more sensitive users will likely want to operate on either the “balanced” or “quiet” profiles.

The technology underneath the cooler hasn’t changed all that much, as we’ll show in a tear-down after CES, and so most of the changes are to the built-in LEDs. That’s entirely visual, and requires no real review/analysis from us. You can decide on the LEDs from our video.

As for the rest, a few small notes: We observed a 2-degree, measurable, repeatable improvement over the stock thermal compound application by manually applying the same Asetek thermal paste (we have tubs of it). The improvement stems from fuller coverage of the X99-sized CPU we’re using, as the stock compound doesn’t fully cover the IHS. It covers enough of it for decent performance, granted, but manual spread should show improvement.

Corsair’s done well to optimize its cooler for acoustic performance and, in that category, is among the best performers on our noise-normalized charts. Flat-out performance isn’t chart-topping nor particularly impressive, but again, their marketing focus was silence, so we’ll give credit for sticking to the marketing. Flat-out performance could be improved with higher speed fans, naturally.

The H150i Pro should be listed here on Amazon once it hits the market. It’s an expensive cooler at $170, so you’ll need to decide whether it’s worth paying for all of the lights, because that’s mostly what you’re paying for. The H115i (non-Pro) provides every bit of performance as the H150i Pro, just without the fancy lighting and with a different sized radiator.