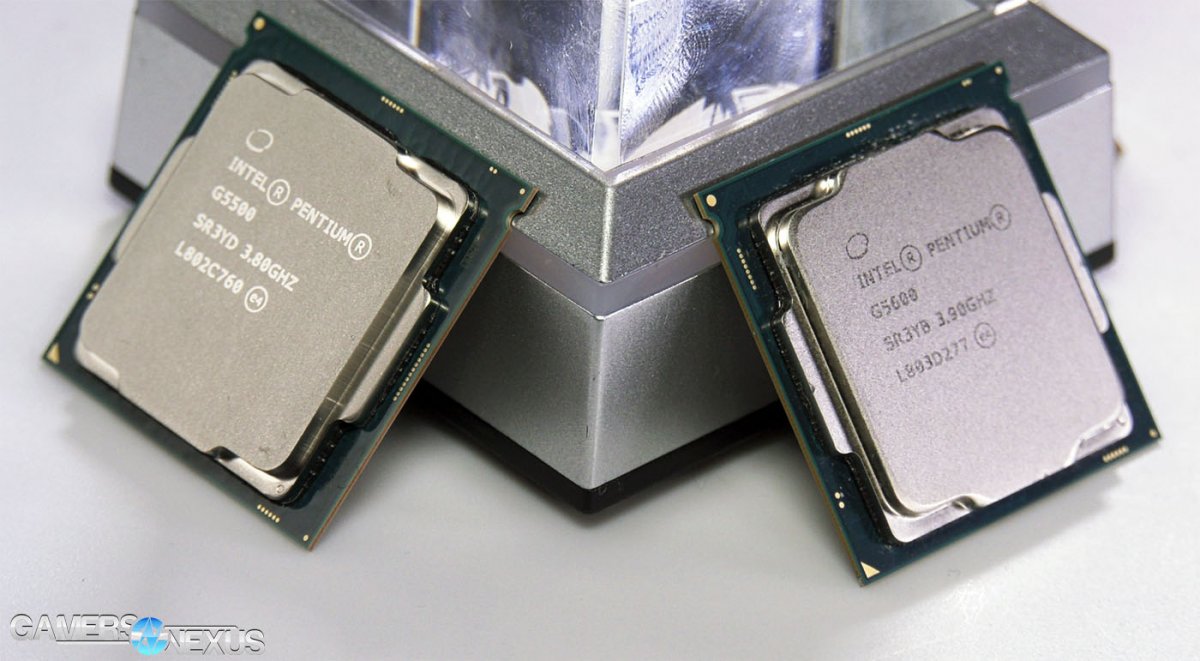 For the G5600, we’re looking at a dual-core/quad-thread CPU at 3.9GHz, no boost, and with 4MB of L3 cache. Maximum memory support officially is 2400MHz, and using an appropriate motherboard would further limit that. These CPUs make the most sense to pair with non-Z-series motherboards.

Because most users would pair these CPUs with H-series platforms, or otherwise non-Z platforms, we are testing the G5600 with 2400MHz memory. It just doesn’t make sense to test on a Z-series platform with faster memory. It’s unrealistic enough to be irrelevant. 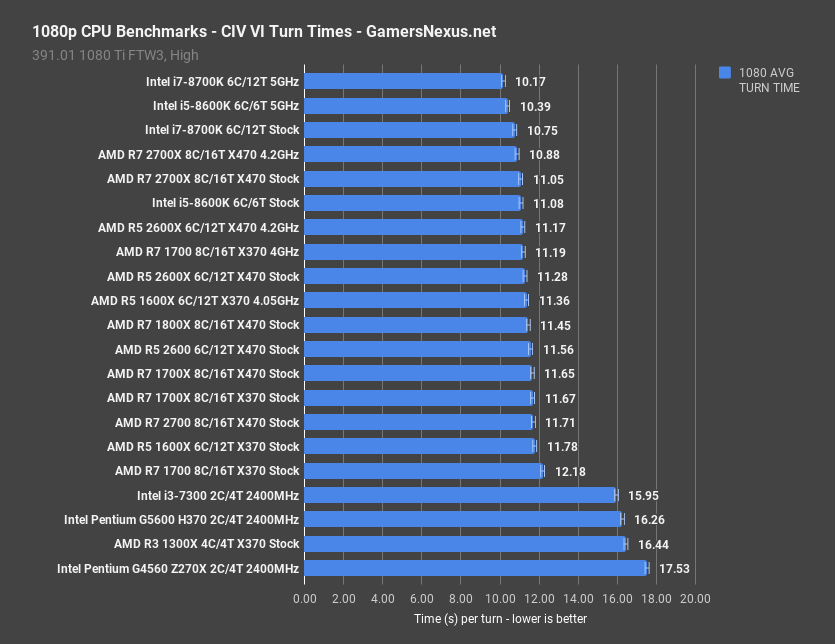 We’re starting with Civilization VI turn-time benchmarks first, as it’s a unique metric that reflects specifically on CPU performance. We run a benchmark that has five turns until our next turn, and for the G5600, each turn averages 16.3 seconds on the G5600 CPU with 2400MHz memory. That’s among the worst three numbers we’ve seen since Civilization’s update, which means that you’re looking at about 1 minute and 20 seconds between your turns. For perspective, the fastest performer, the overclocked 8700K, sees turn time drop to about 51 seconds when multiplied by 5 turns. 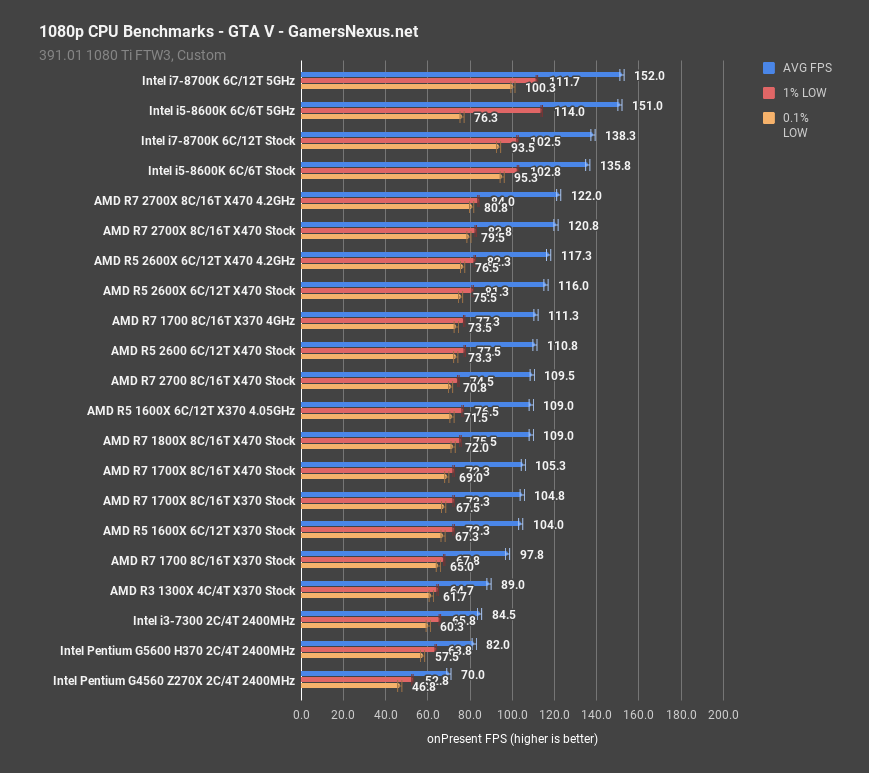 GTA V isn’t particularly friendly to the Pentium CPUs, although is still plenty playable. We’re clearly running into GPU bottlenecking at this point, operating at 82FPS AVG with the G5600 versus a maximum possible 152FPS AVG with our GPU-bottlenecked 8700K and 8600K 5GHz results. The G5600 still manages to outperform the G4560 by 17%, a remarkable uplift, and is roughly matched with the i3-7300 in AVG, 1%, and 0.1% lows. The R3 1300X operates 8.5% faster in average FPS, with no meaningful difference in frametime performance. That’s about 1% per dollar extra spent on the 1300X – not a bad uplift if considering the Ryzen alternative. 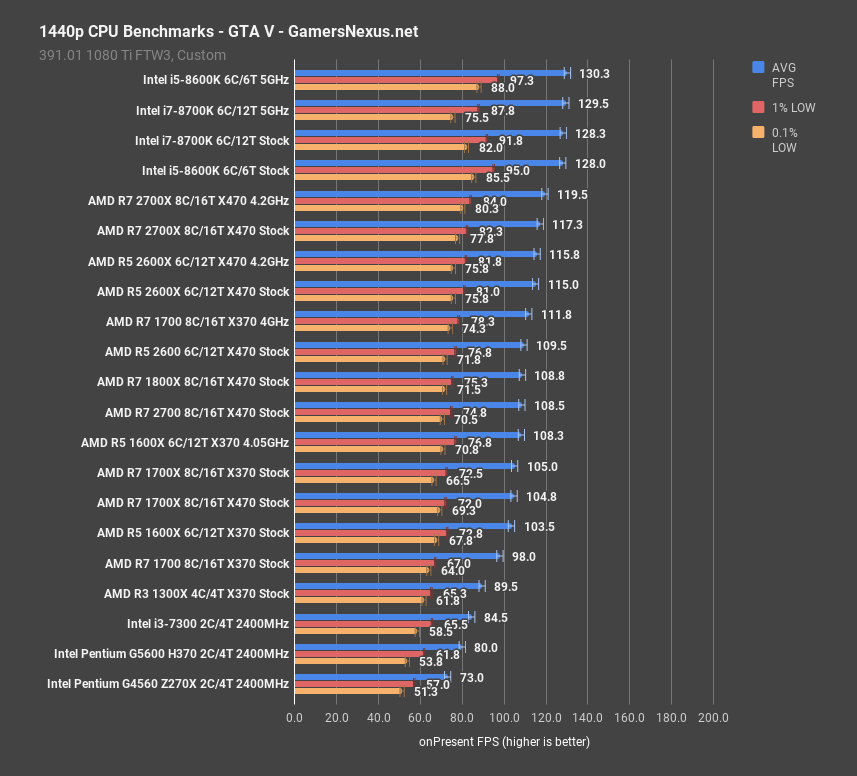 At 1440p, it’s about the same results. The only thing that changes is the top-end performance, because we’ve been completely bottlenecked on the CPU, and remain bottlenecked even under more intensive GPU scenarios of 1440p. The G5600 remains at around 80FPS AVG. 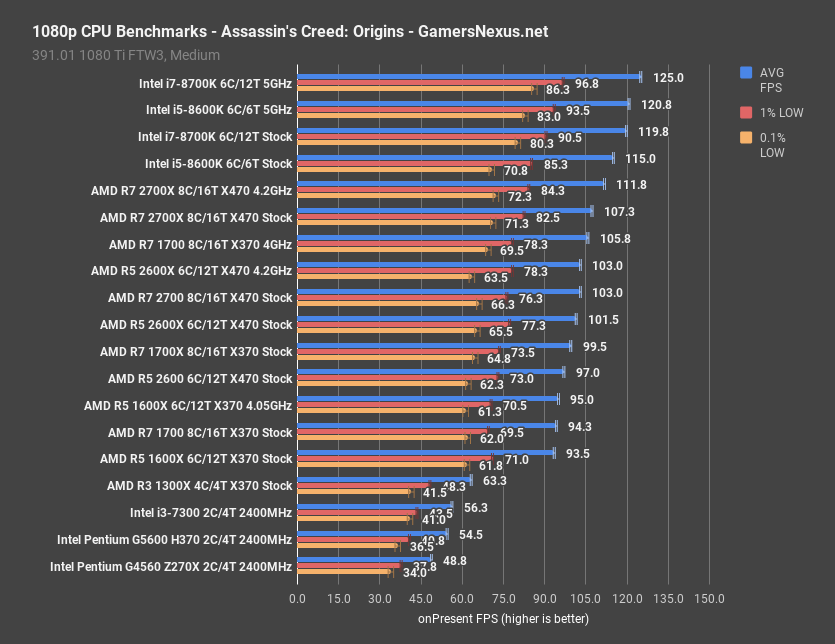 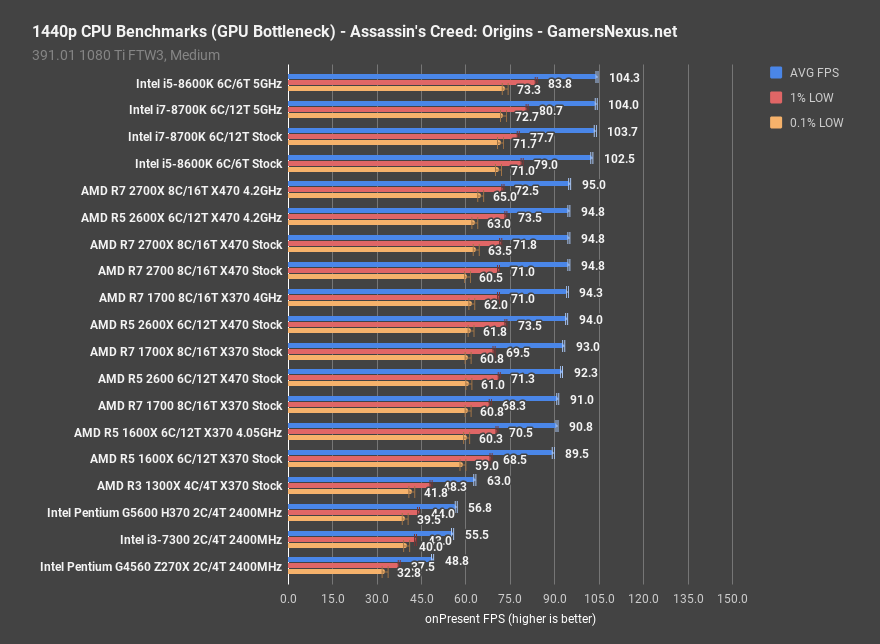 Performance is similar at 1440p, as shown here. We have some differences that are within variance, but that’s about it. Let’s move to Watch Dogs 2. 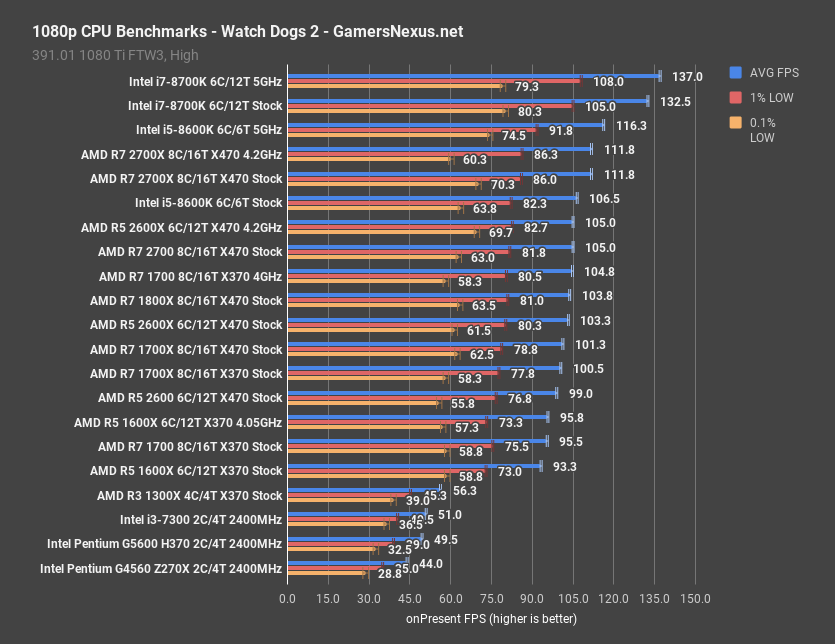 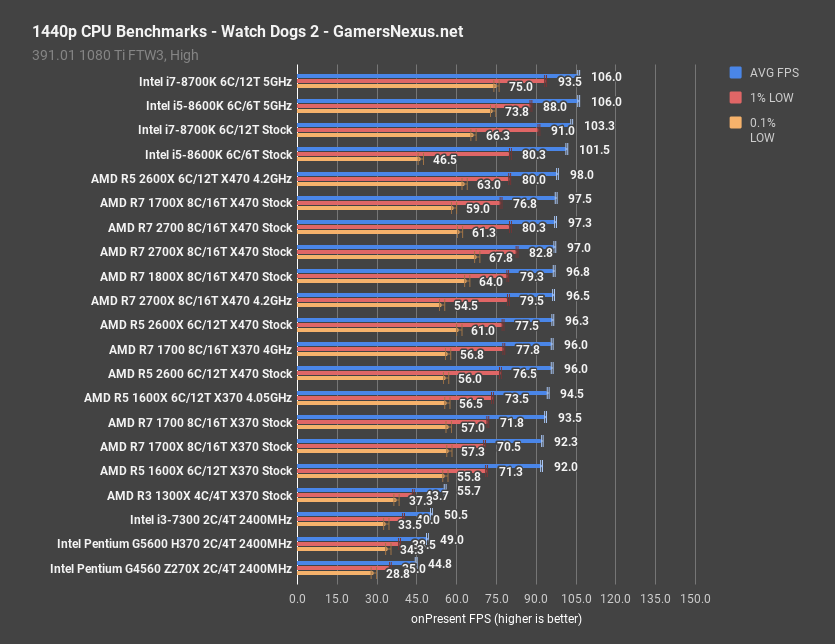 As expected, 1440p results post the same values for the low-end. Nothing changes in the stock here. We’ll just skip along to the next chart. 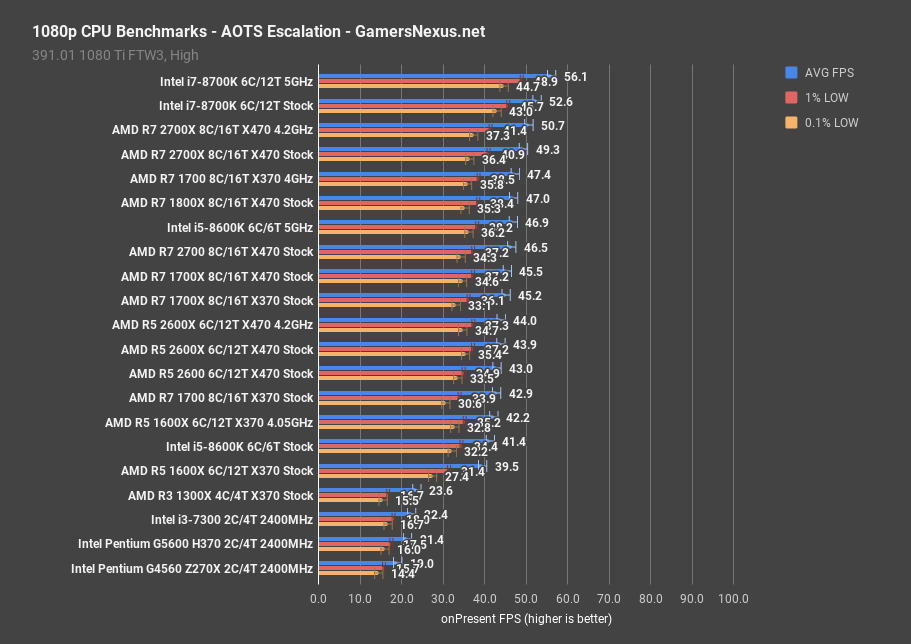 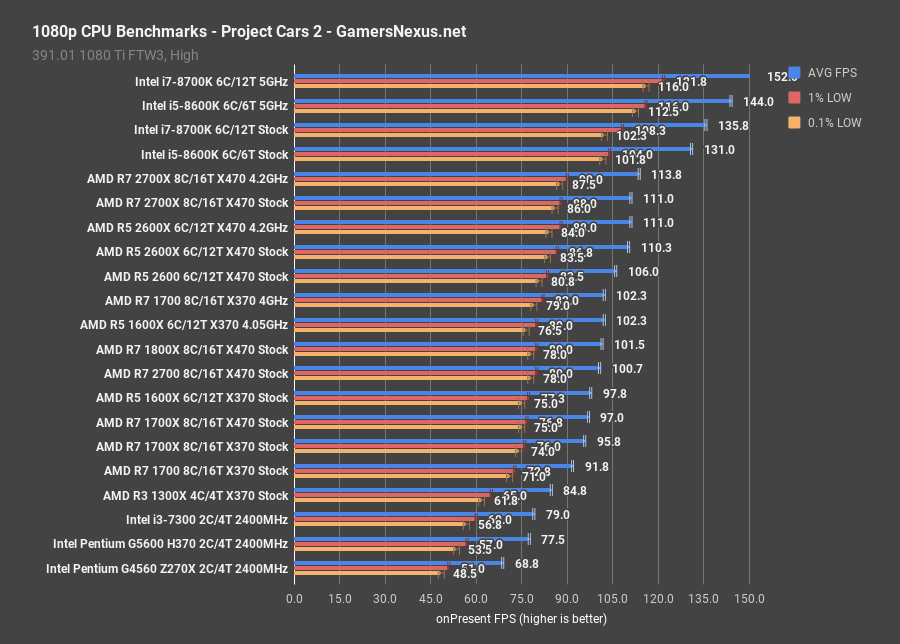 The R3 1300X manages 85FPS AVG, with lows also advantaged, but again not particularly user-appreciable. The lead is about 9% for the R3 in this one.

Finally, for low-end games, we’re mostly comparing versus the likes of the AMD APUs when using a GT 1030 for the Pentium processors. This puts pricing as similar to the R5 2400G, or close enough to it to be comparative. 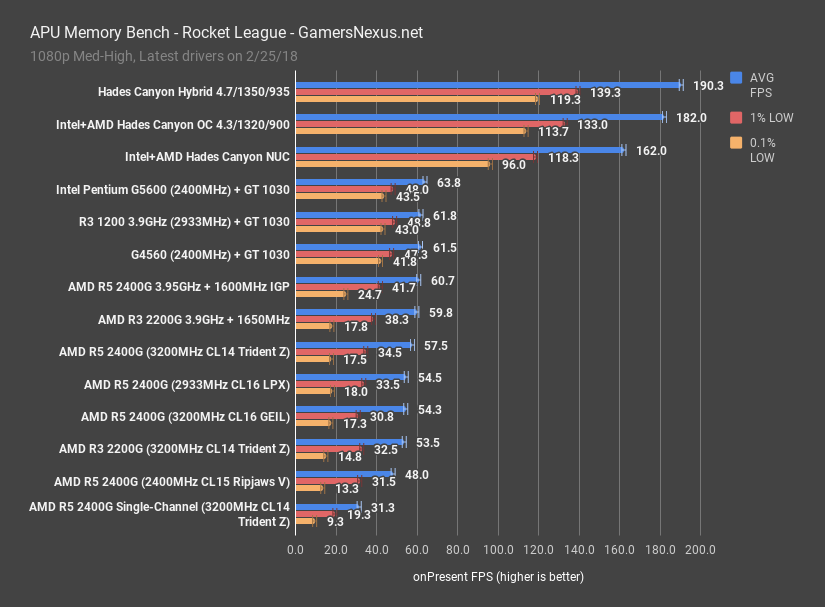 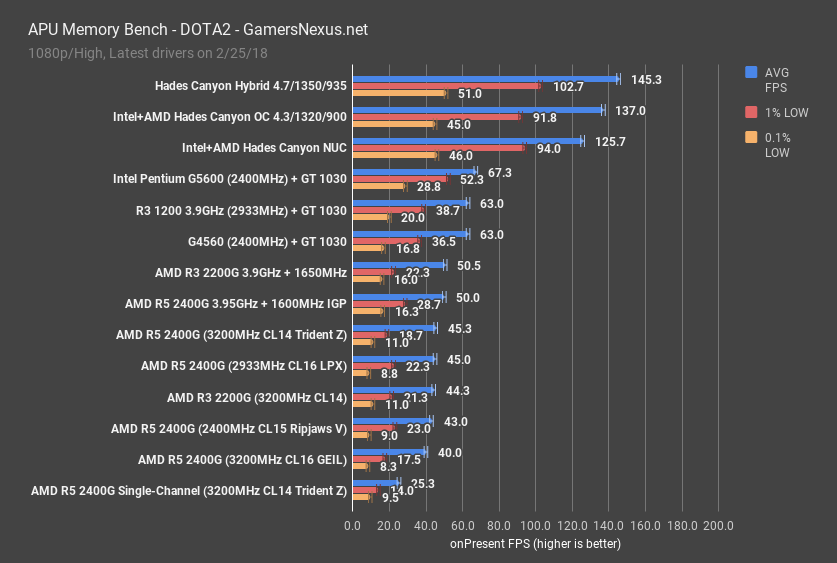 DOTA2 shows similar CPU limitations: The G5600 leads everyone else, even the overclocked R3, but that’s partly because DOTA2 shows strong favor toward Intel. It’s frequency and IPC-intensive. 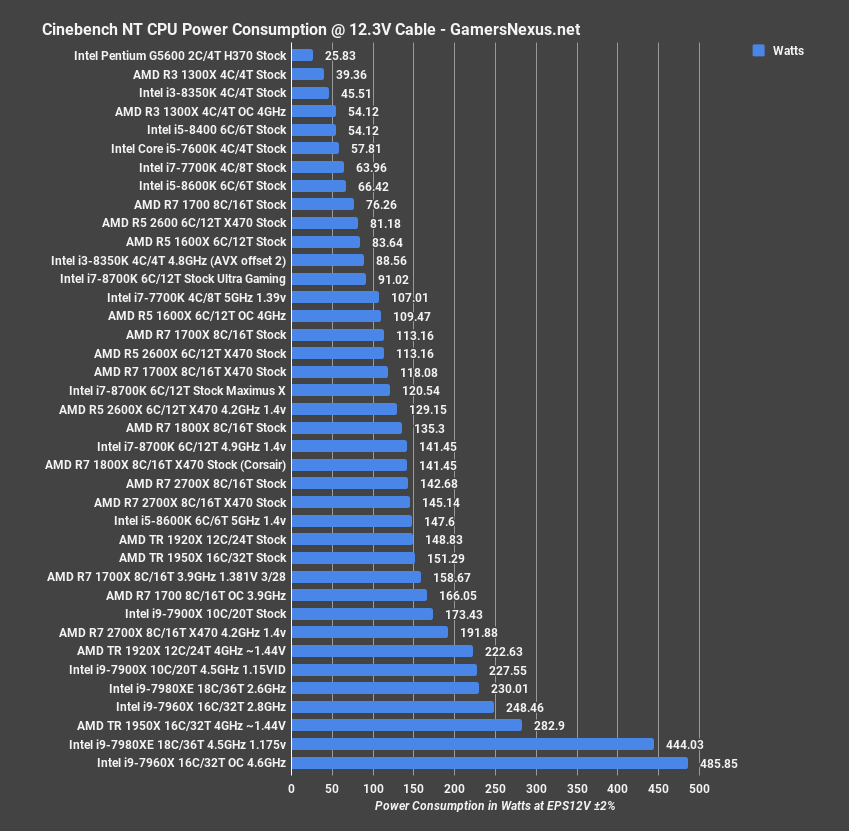 Finally, for some perspective, it’s only fair that we look at power consumption numbers. These are taken as measured at the EPS12V rails. For Cinebench multi-threaded, the G5600 is the lowest power-consumption device we’ve tested lately. It’s operating at about 26W on the H370 motherboard, with the next lowest device at 40W for the R3 1300X stock CPU. The i3-8350K stock CPU operated at 46W. 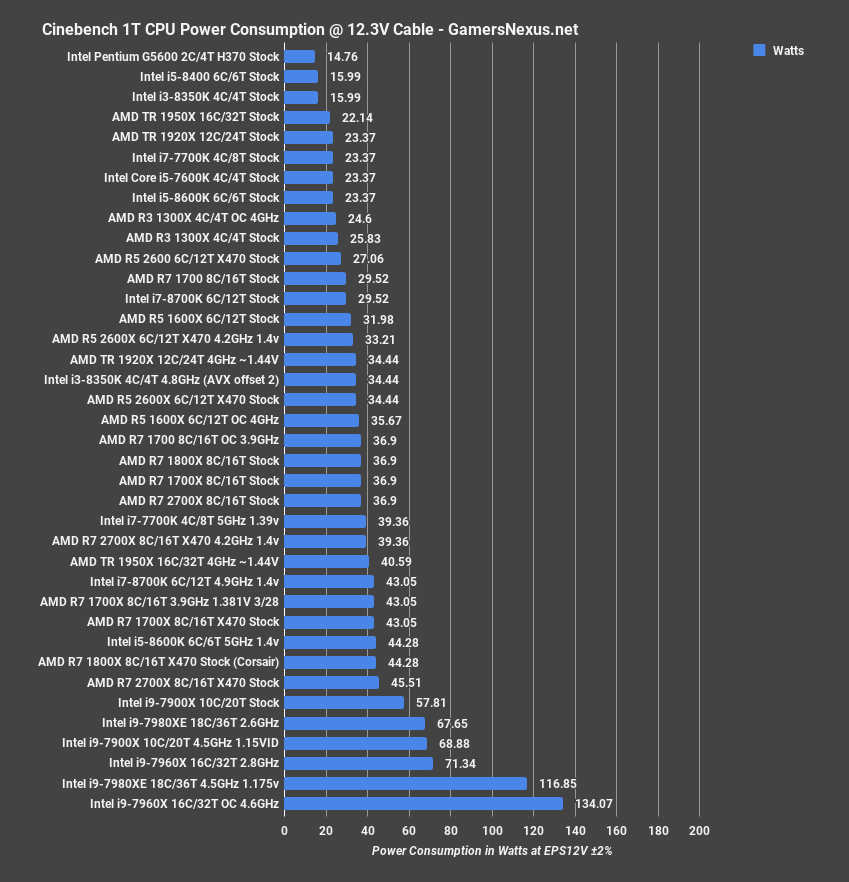 Single-threaded power consumption is up against the limitations of our test resolution, at about 15W for the G5600 single-threaded. 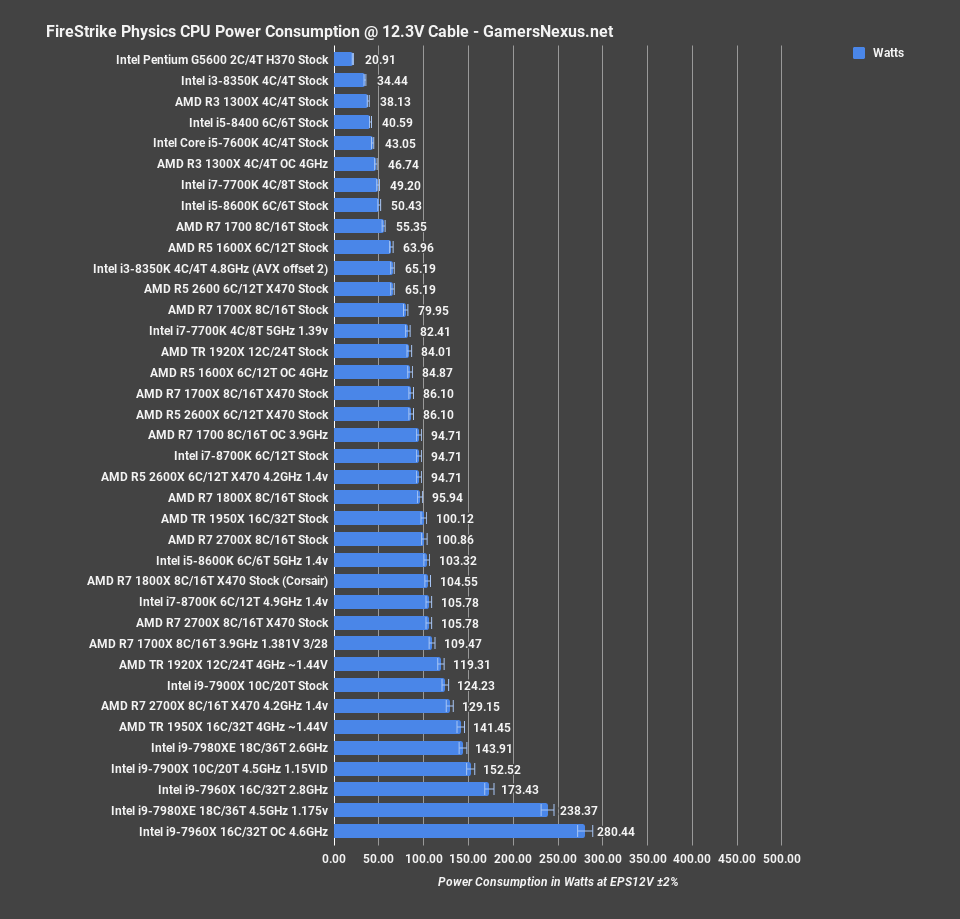 3DMark Physics testing is our gaming stand-in, and shows a 21W consumption at the EPS12V rails. That’s significantly lower than the 38W 1300X and the 34W 8350K. Given the average difference in gaming performance, it seems fair that the G5600 operates behind the 1300X when we see these power consumption metrics.

At $40 more than the G4560, it makes sense that the gains we’re seeing are as big as they are in some instances. That said, we’re also getting close to the R3 1300X without an overclock, and that’s just a few dollars more. The G5600 improves over the G4560 in big ways, but with the perspective of Ryzen and nearby i3s, it’s just an odd product to justify. We think that the cheaper models, the G5400 at $73 and the G5500 at $85, are potentially better buys than the G5600, which borders too close to i3 and R3 territory to really seem worth it. We’ll test those other Pentium CPUs shortly and let you know how they do.