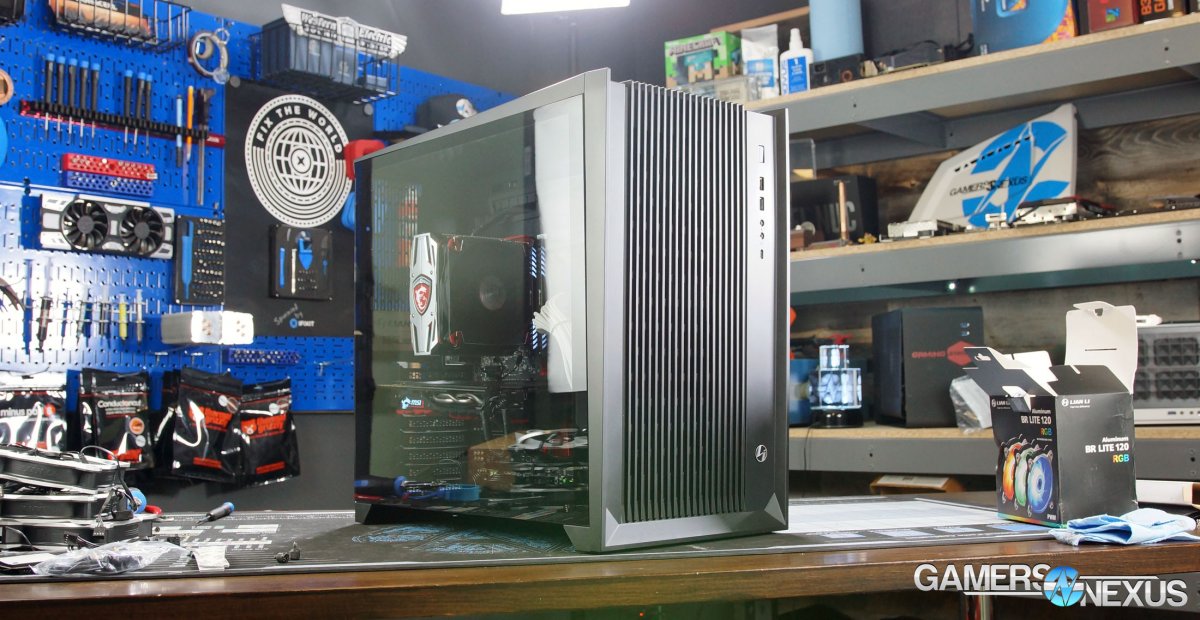 Lian Li’s O11 Air is one of the most awaited cases this year, first shown at CES in January. The O11 Air is advertised as an airflow-focused case, the counterpart to the O11 Dynamic (~$130). This is done by removing the tempered glass on the O11 Dynamic (reviewed here), and instead opting for two intake fans and a grill. Our performance test results for the O11 Air might surprise you, though.

The Lian Li O11 series uses the same tooling for both the O11 Dynamic and O11 Air, with some subtle changes to tooling on the O11 Air. Other primary changes include, obviously, the inclusion of fans and front/top-panel grills for airflow, contrary to the Dynamic’s glass focus.

A quick outline of the differences between the O11 Air and O11 Dynamic are below:

Most of the build quality and ease-of-installation features remain the same, and our analysis and review of those features also remains the same. We’d encourage you to check our “The Build” section of our Lian Li O11 Dynamic review for more thoughts on overall quality.

Some quick notes with the new version:

The front panel, a new addition, is somewhat annoying to install and align. This isn’t a deal-breaker, as it’s just a matter of trying to socket the panel a few times before it lines-up. We just think this is an easy area of improvement for Lian Li’s ease-of-use department of the case.

On the upside, all panels have easy mount/dismount systems that we think other cases should learn from. The side panels, as with the O11 Dynamic, are removed just by pushing up – no screw required – and the front panel is removed via two Philips screws.

As with the previous case, cabling channels are extra deep to accommodate the compartmentalized PSU support. Also as previously, a hard drive cage can be removed to instead install a second PSU. 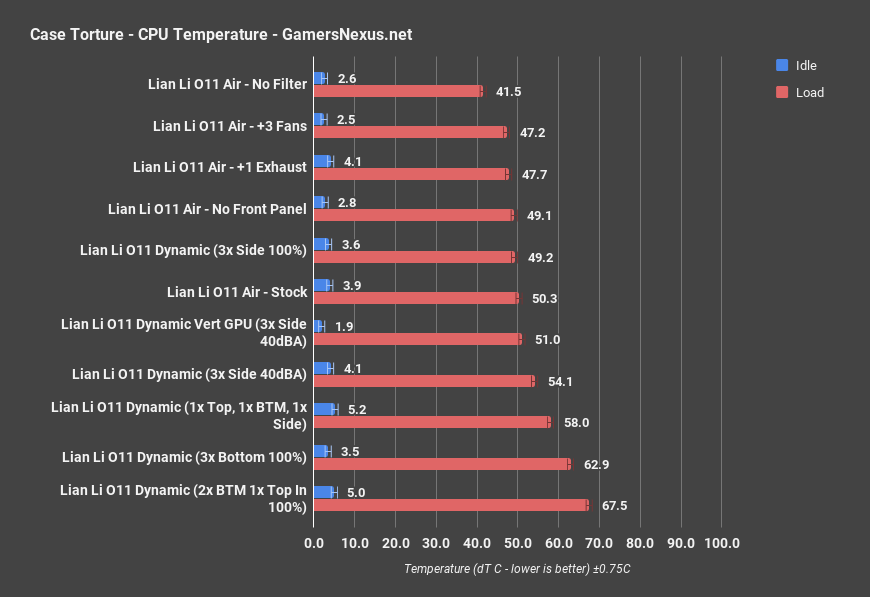 Starting with just the Lian Li O11 Air, torture testing places CPU performance at an overall unimpressive 50 degrees Celsius over ambient. As you’ll see in our comparative chart, there’s nothing particularly special about this result. It’s OK, but not great for a case marketed at airflow. Removing the plastic front panel didn’t change a whole lot, dropping us from 50 degrees to 49 degrees – within reasonable margin of error. We next removed the magnetic dust filter, running with no filter and no front panel. This is where we saw a big change: The new result plotted 41.5 degrees Celsius over ambient, a steep 9-degree reduction from the stock test. We’ve seen this before in other cases, like the Thermaltake G21, where the dust filter is responsible for significant airflow reductions.

Back to the chart, though, we had two final tests: One with a single exhaust fan added, one of the Bora Lite fans, which dropped us to 47.7 degrees over ambient. Not really that impressive. The last test was with three fans added: One top exhaust, one side intake, and three front intake. In this setup, CPU performance didn’t improve in any measurable way. We’ll have to look to GPU performance for a comparison. 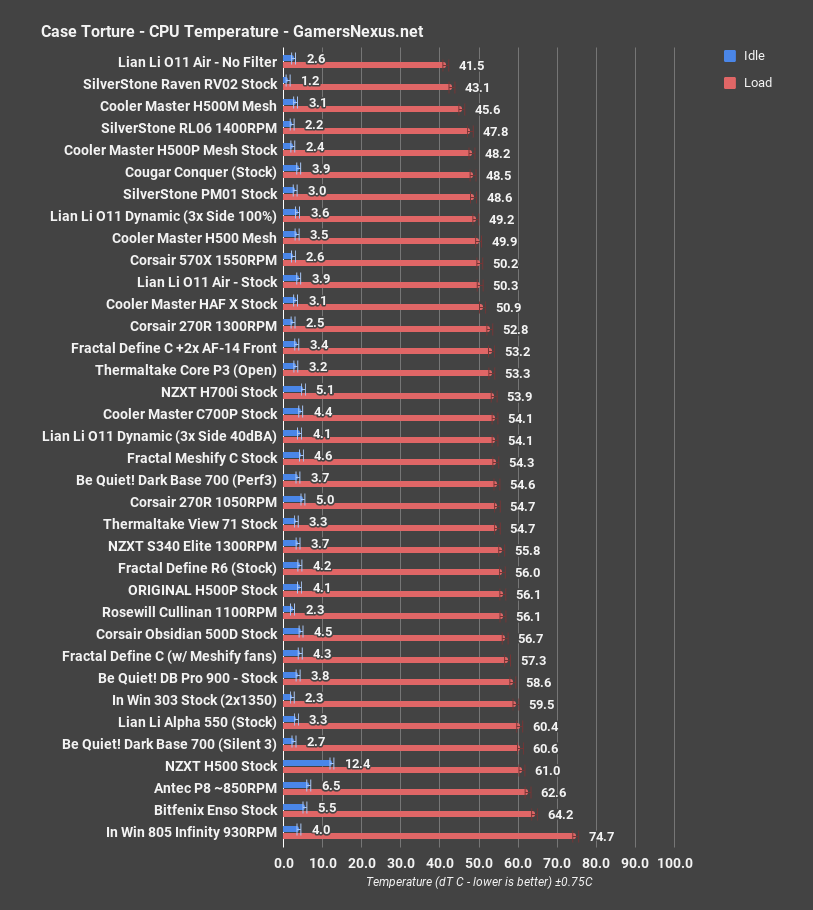 Comparatively, CPU performance is impressive when the filter is removed – but only then. Removing the huge impedance of the filter brings us to 41.5 degrees over ambient, which is superior even to the long-standing leader that is the Raven RV02; unfortunately, because this performance isn’t achieved with stock settings, we can’t give the O11 Air our Best of Bench award. SilverStone retains that. This leading performance is derived from close proximity between the CPU fan and intake fan, good exhaust avenues, and good intake positioning. Performance is exceptionally competitive and impressive once the filter is removed. It’s good enough that the O11 Air does become the best performer on our bench, which is a high bar to clear.

With the filter installed, the O11 Air falls to 50 degrees over ambient, between the HAF X and 570X at 1550RPM. The O11 Dynamic with 3 side intake fans also performs equally. 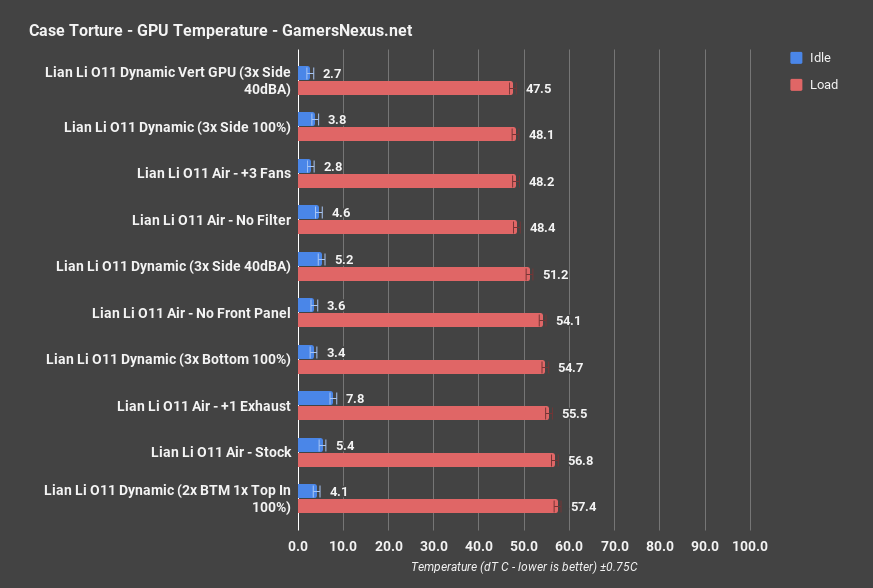 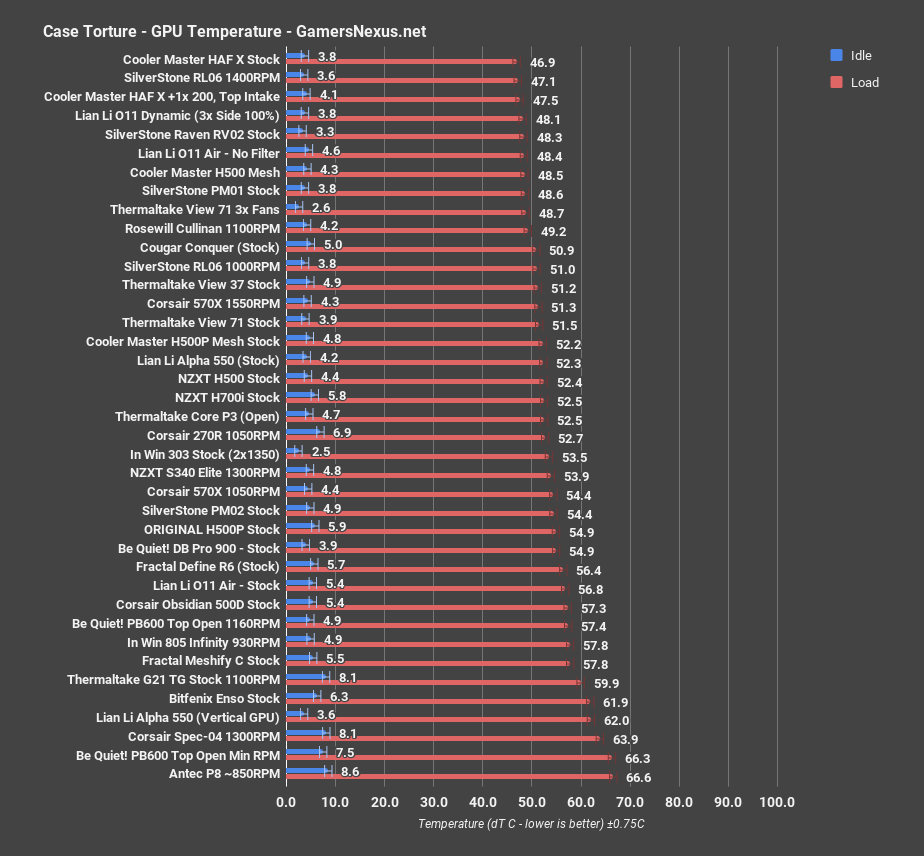 Comparatively, the O11 Air lands toward the bottom of GPU torture performance when in stock configuration. The case is comparable to the Define R6 and 805 Infinity, and isn’t all that far from the absolute bottom. Removing the filter changes everything, and propels the O11 Air to the top 10, right behind the venerable RV02. Fortunately, this is an easy change for the end-user to make. 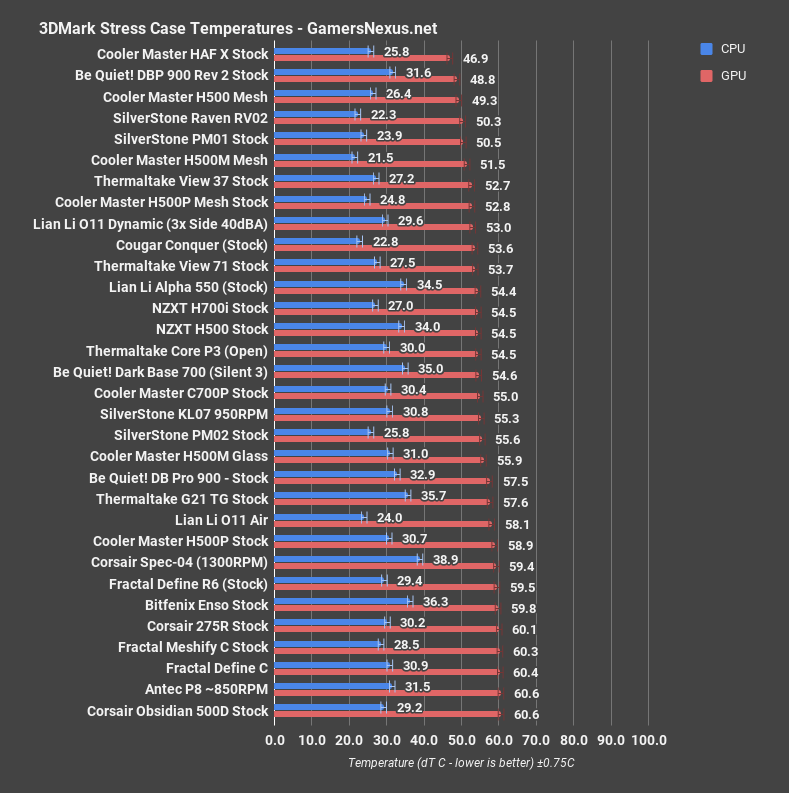 Moving on to the other tests, we’ll just be testing the stock O11 Air – just like we do for everything else. This means that the filter stayed on. In Firestrike testing, a stand-in for game benchmarks, the O11 Air gets embarrassed by the G21 and Dark Base Pro 900, respectively a $60 case and silence-focused case. If we look at the O11 Dynamic’s performance at 53 degrees, it’s clear that there’s plenty of room for the O11 Air to chart-top, but that filter needs to be removed. As a small aside, the O11 Air does manage to hold one of the better CPU temperatures in this test, but that hardly means much. 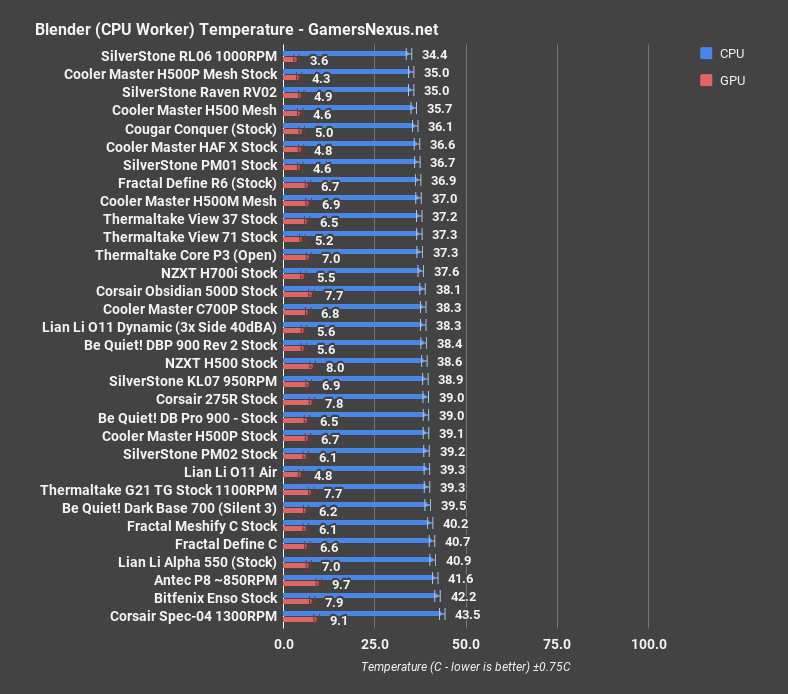 Blender CPU testing places the O11 Air again toward the bottom of the chart, close to the G21 and SilverStone’s PM02, which is the worse of the two Primera cases on this chart.

Blender GPU rendering establishes the O11 Air just below the half-way point, right around the H500M Mesh and PM02. 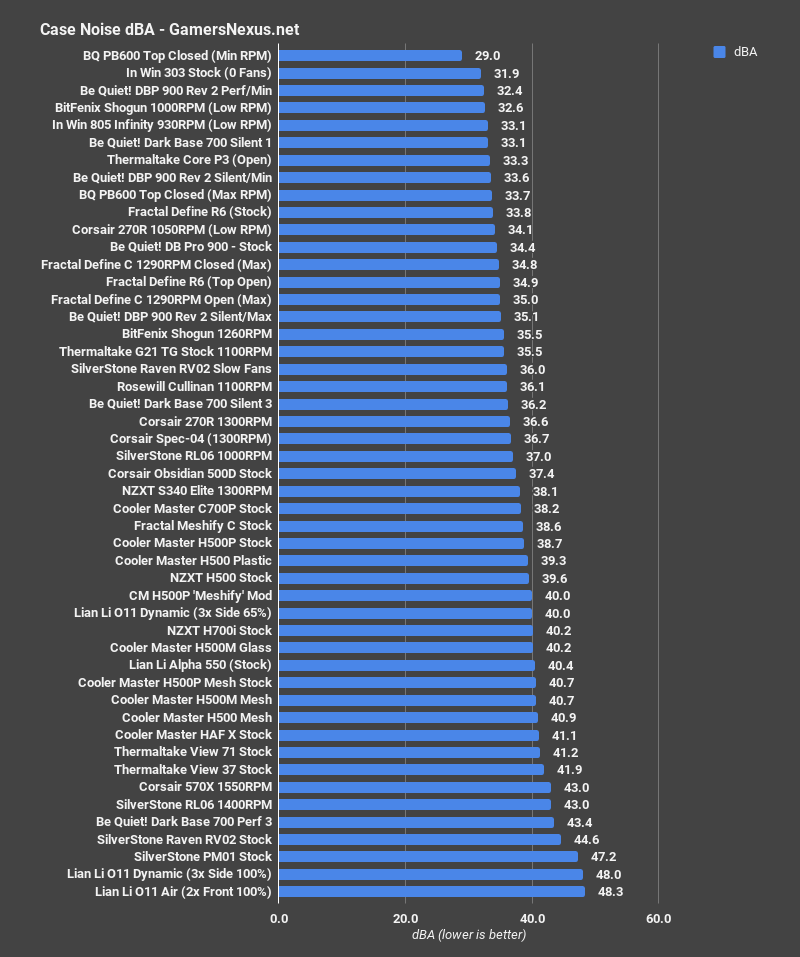 For noise testing, first note that the filter changes the fan pitch to a higher whine than when the filter is removed. The dBA measurement is the same, at 48.3dBA with fans at max speed, but the pitch worsens. Despite being loud, keep in mind that you can lower the fan RPM and position this closer to 40dBA, which is our acceptable target. If lowering fan RPM to reduce noise, we’d strongly recommend removing the dust filter to keep competitive performance. This noise output is why the O11 Air does so well when unconstrained – it’s just brute force.

We still like the O11 chassis on the whole. Build quality remains high, compartmentalization is good, and the design is focused on function. Given partnership with overclocker Der8auer, all of this fits the bill.

Thermal performance is also excellent, but only if the front filter is removed. With the filter on there, we see significant obstruction and impedance to airflow, which reduces overall thermal performance. The reduction is such that the RGB version of the case, which adds 3 fans, would perform equivalently to the 2-fan version (rather than 5) with the front filter removed. Note, as always, that this depends on your configuration – but for a dual-axial card and tower cooler, that’s what you can expect.

Fortunately, this dust filter problem is not an inherent design flaw. It’s trivial to remove the filter, so users who are more performance-oriented are suggested to do so. Replacements are aplenty from companies like SilverStone, if a finer-meshed filter is desirable for dust prevention while retaining some performance focus. That’s the main issue, and it’s easily correctable. The filter’s mesh is simply too dense, with not enough empty space for air to pass through, and is causing an unnecessary rise in temperature. That said, once removed, the case is our chart-topper and maintains top-tier performance.