Lian Li’s Lancool One is a case we’ve seen multiple revisions of, first at CES (under the name Fusion Elite) and then again during our pre-Computex factory tour. “LanCool” is/was a subsidiary that was treated like a distinct brand for selling cases which were less exotic and more affordable than Lian Li’s standard fare. This is the first use of the name in several years, and it’s now more of a prefix than a separate entity. The version we were sent for review was the Lancool One Digital, which has a few minor differences from the base model as seen below.

The Lancool One ships at $90 for the non-”Digital” version, with the Lancool One Digital offering addressable RGB LEDs for an extra $10. Our Lian Li Lancool One review works with the Digital version, but the cases are the same aside from lighting changes.

The front panel is the centerpiece of the case. It’s split down the middle with a six-sided cutout at the center, a bit like the old Deepcool Genome II, but with a plastic strip dividing the cutout into two trapezoids. That’s already an unusual look, but it’s also ringed by RGB LEDs (addressable in the Digital version). They do an excellent job of lighting up both the panel and the filter behind it, to the degree that LED fans are unnecessary. 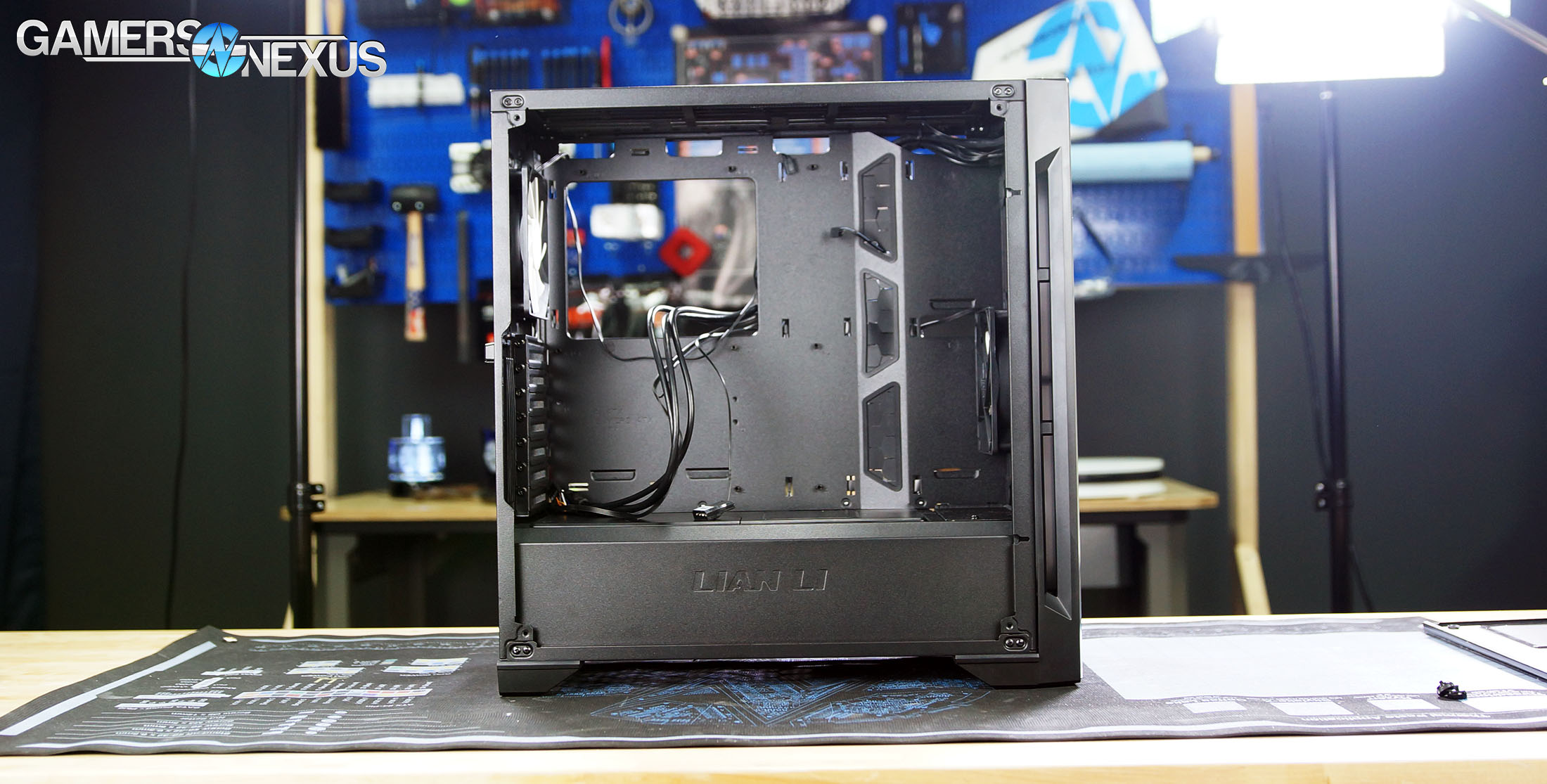 8.25kg is surprisingly light. The glass side panel and brushed aluminum faceplate do a good job of making the case seem more heavily built than it actually is, while still remaining fairly sturdy. The top panel is held in place by strong magnets, the glass is held by two captive screws that face the rear of the case and don’t interrupt the window, and the steel panel is held at the top by two thumbscrews like the In Win 303. Every panel in the case is held on a different way, and they all work well.

Internally, one of the aspects we were most interested in testing was the PSU shroud. It’s ventilated along the entire top length, but it ships with two plastic covers/SSD mounts that magnetically clip over it. With those covers removed, one or two 120mm fans can be screwed onto the surface of the shroud to aim air up at the GPU and into the body of the case.

The number of screws used is kept to a minimum throughout the case. The translation work on Lian Li’s product page is a little rough, but “screw less design mostly everywhere” is an apt description. The side panels each use two screws, the HDD cage and radiator cutout on the shroud use one screw apiece, and the vertical GPU slot covers, top panel, and PSU shroud top covers all just use magnets or latches. The vertical GPU cover in particular is completely unnecessary, but it shows some good attention to detail. The whole build process was painless; preinstalled velcro ties made cable management extremely easy, and the PSU shroud is roomy enough to hide anything left over.

We skipped the vertical GPU test this time. As with most other cases, the slots are placed so that our wide GPU can’t fit vertically under the air cooler we use, and we’ve done enough tests like that in the past to know that it’s bad for thermals.

In Lian Li’s words: “Sufficient airflow tunnel, makes the cooling easy just like piece a cake.” We were curious to see whether the small forward-facing vents would make a big difference in temperatures, as well as the shroud fan mounts. We tested in stock configuration, with the shroud cover removed, with no front panel, and with a 2000RPM 120mm NZXT radiator fan stuck on top of the PSU shroud. 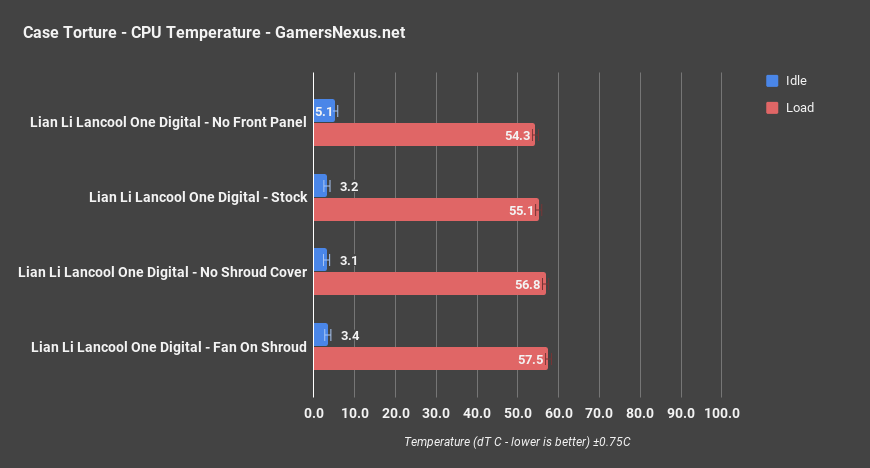 We're starting with only the Lancool One's temperatures, then we'll look at comparative charts. CPU temp averaged 55.1 degrees Celsius delta T over ambient during torture testing. This increased to 56.8 degrees with the removal of the PSU shroud cover, a result of changing the pressure patterns of the case and feeding the GPU more air. Putting a fan on the shroud pointed into the GPU intensified this effect, raising CPU dT to 57.5C. Heat doesn’t get destroyed, it just gets spread around. In this instance, the GPU is pulling more of the air with changing pressure patterns, and the CPU is left to deal with radiative heat off the back-side of the GPU, as it slowly radiates up and into the CPU tower cooler. Removing the front panel did benefit CPU temperature, lowering it to 54.3 degrees over ambient, but far less so than in other cases. We left the filter in place for this test, since it’s a necessary part and would be difficult to improve on. The results show that the plastic and aluminum panel isn’t a significant bottleneck. 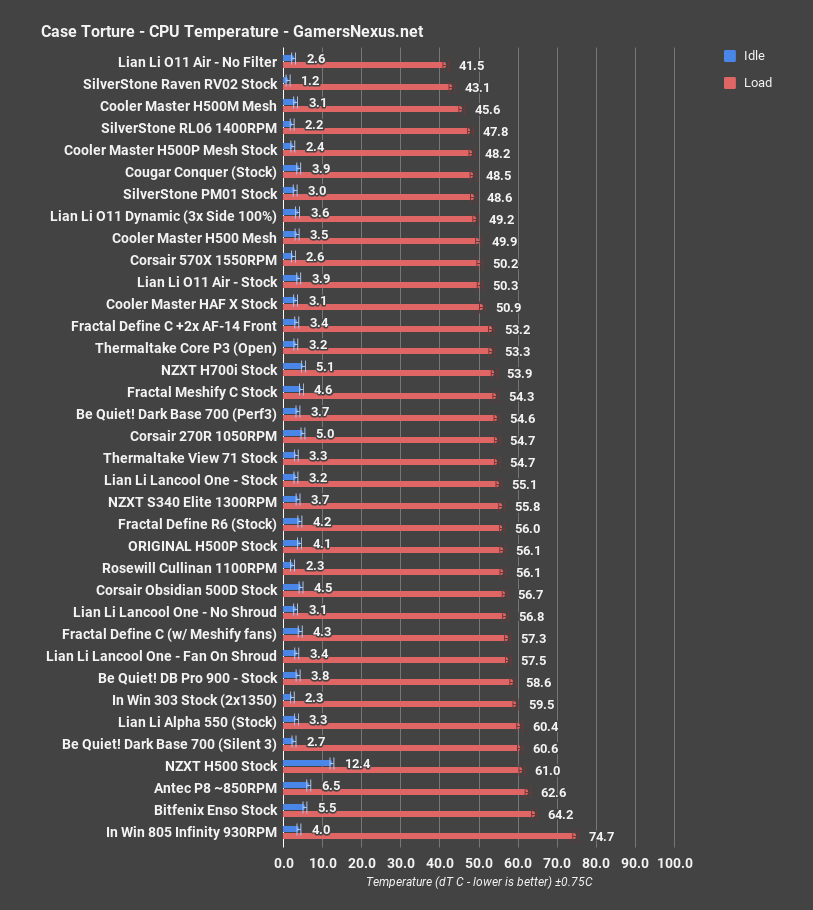 Moving on to comparative tests with other cases on the bench, 55.1C dT average places the Lancool One between the stock View 71 and Define C, both of which have fair cooling. It’s much cooler than Lian Li’s own Alpha 550 was, but several degrees warmer than the O11 Air -- even without its dust filter removed. The Lancool One ends up in the neighborhood of a lot of single- or dual-fan cases. It's not amazing, but as long as it doesn't advertise itself as being high-airflow, it's fine. The case manages a unique look without completely filling-in the front panel. Extra fans can certainly help, Lian Li just tends to ship with fewer fans to allow consumers to buy the fans they prefer.

Moving on to standalone GPU temperatures with just the Lancool One: GPU dT averaged 56.8C in the torture test, and dropped to 54.8C dT with the shroud cover removed. Adding a fan to the shroud for active cooling didn’t help, and averaged 55.7C dT, which is within error margins of the previous test. There are two fan slots in the shroud, but one is covered by the PSU, so we installed a fan in the slot that’s farther forward. Actively pulling air to cool one section of the GPU may have robbed air from the rest of it, primarily cooling the VRM and not the core, or the intake fan may have pulled in some warmth from the PSU. Either way, just taking off the PSU shroud covers and letting the GPU do its thing passively is the best solution here. Removing the front panel was tied with removing the PSU panels, averaging 54.7C dT. 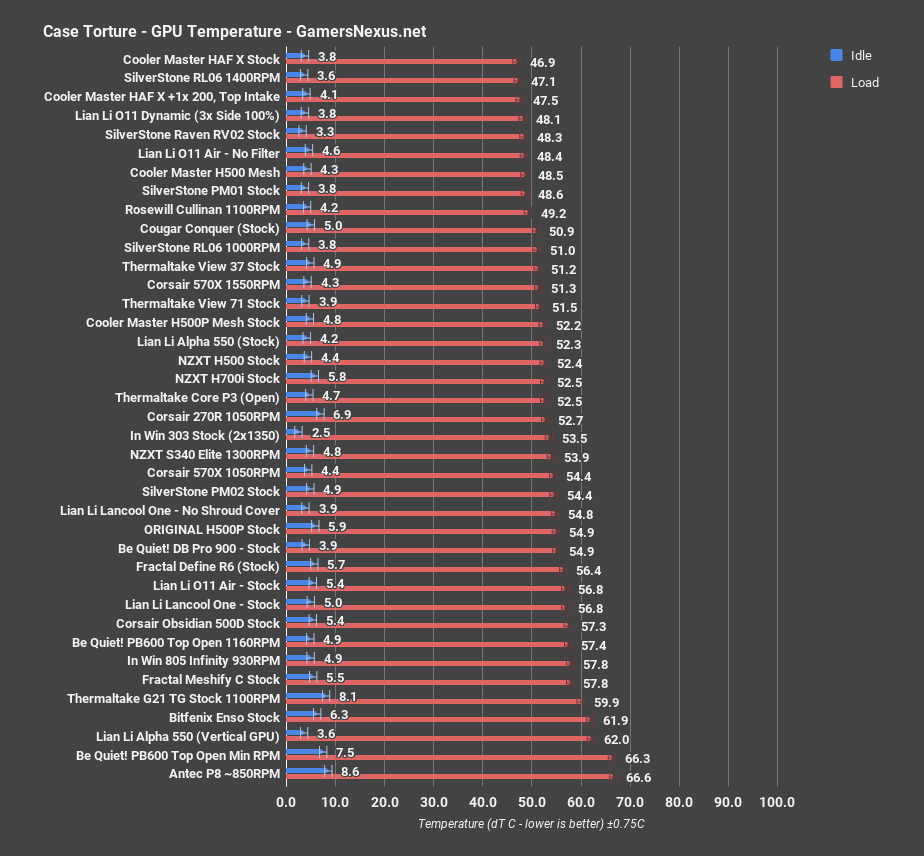 The Lancool’s baseline GPU average is exactly the same as the O11 Air. The more favorable average with the PSU covers removed falls between the H500P and the PM02. We criticized both of those cases for their cooling, but mostly because they were both mediocre successors to better-cooled models--54.8C dT is towards the warm end of our chart, leading us to recommend purchasing extra fans and placing them carefully if buying the Lancool. Given that there is room to add fans to the case, it's not a disastrous result – just again, not impressive for out of the box thermals. The good news is that the Lancool does have capacity for more cooling, so you're not limited to its stock configuration. 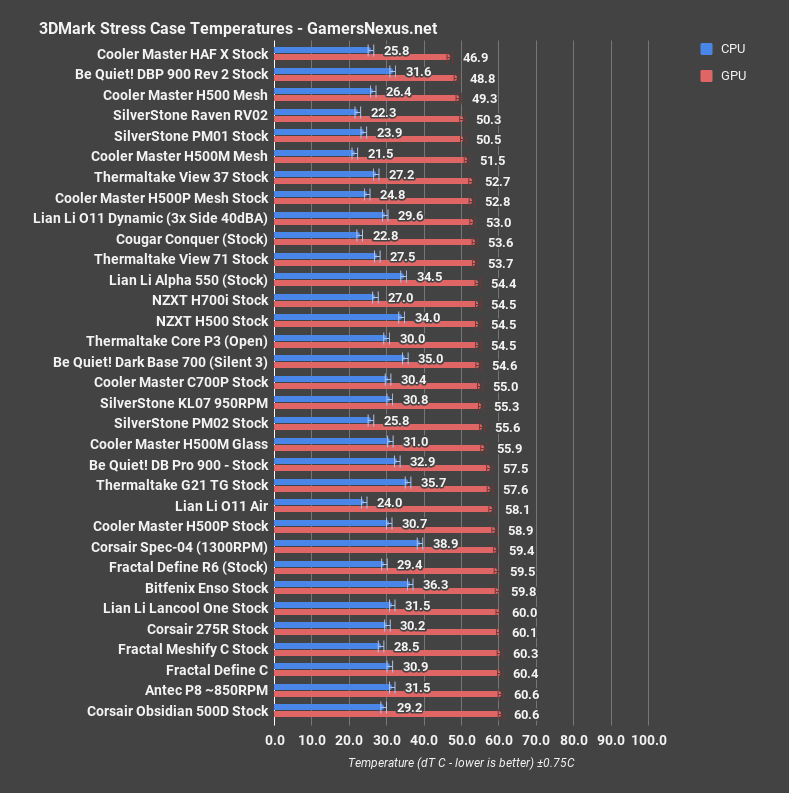 The Firestrike test averaged 60C dT on the GPU, hotter on the relative scale than the GPU torture test was. This was back in the stock configuration, so the advice about removing the PSU shroud covers still stands. This case isn’t the best for GPU temperatures, at least not with a single stock intake fan. 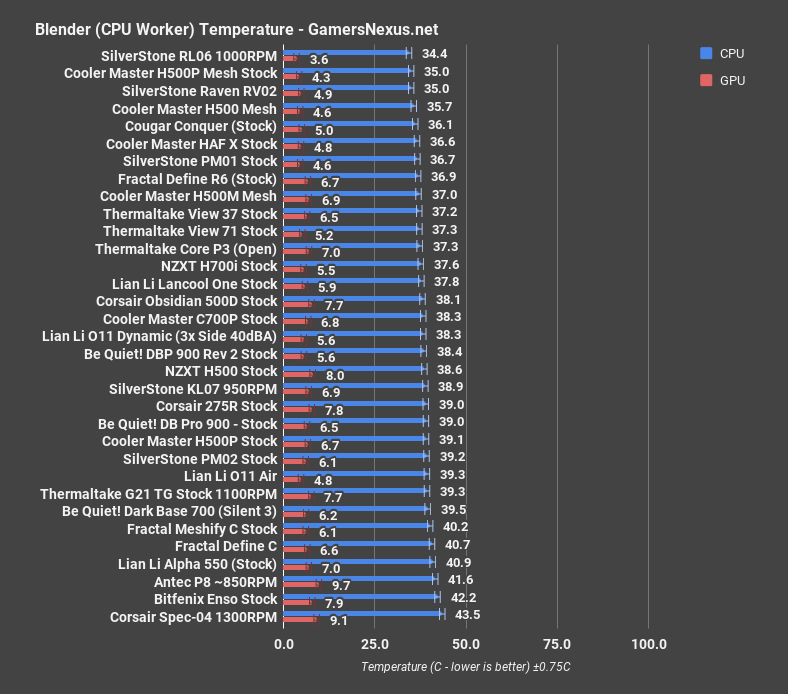 Average CPU dT when rendering on the CPU was 37.8C, around the View 71 again as well as the O11 Dynamic. That’s respectable, but still a few degrees warmer than the top performers.

Average GPU dT when using GPU accelerated rendering was 27.7C, between the KL07 and the H500P. As with the other GPU tests, this is relatively warm. 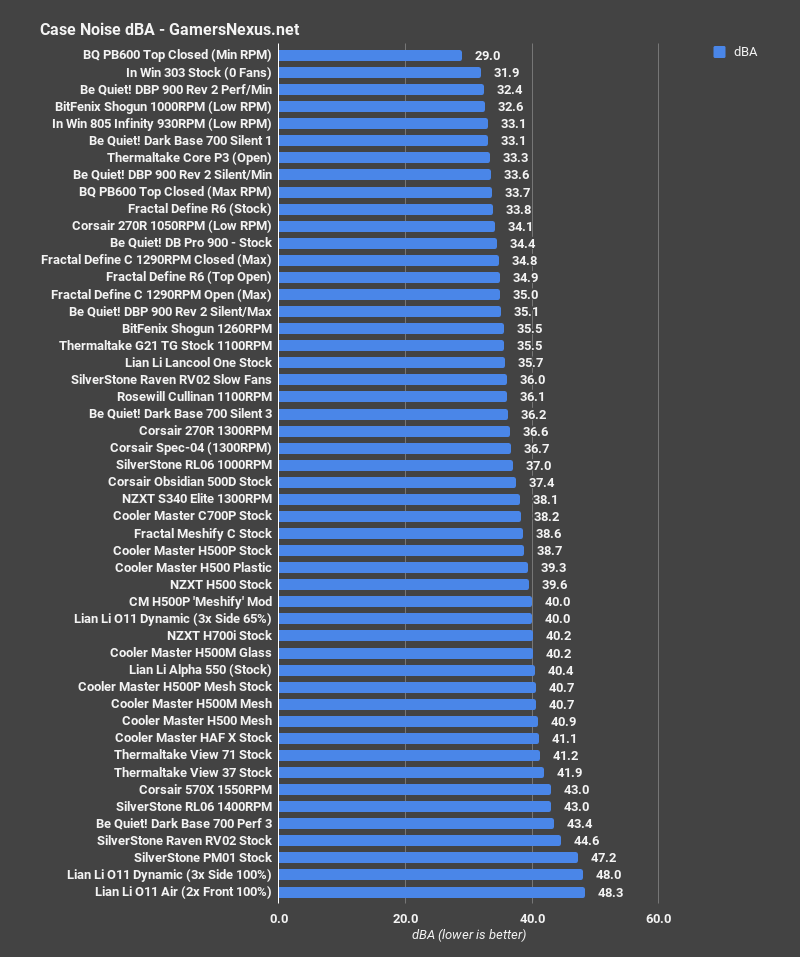 The noise level in the stock case configuration was 35.7 dBA, much quieter than any of the O11 variants. It may not have a sealed front panel, but it does come with just two 120mm fans listed as 1000RPM, only one of which is mounted at the front of the case. There isn’t much barrier to sound at the front of the case, so adding intake fans will have an audible effect.

This is a well-made case in the areas that matter. It could cool better with more fans, or with better fans, but a decision was made not to do that in order to keep costs down. Lian Li has been trying hard lately to create good, affordable cases, and the Lancool One is a success at $90. $10 extra for the digital version isn’t worth it though, unless addressable RGB is absolutely necessary.

For better cooling, we would suggest removing one or both PSU shroud covers and either replacing or adding to the stock fans. The 1000RPM fans are the biggest hold-up, unsurprisingly, but it is quiet. If you’d like similarly priced alternatives, the Corsair 400C and Cooler Master H500 are worth considering.