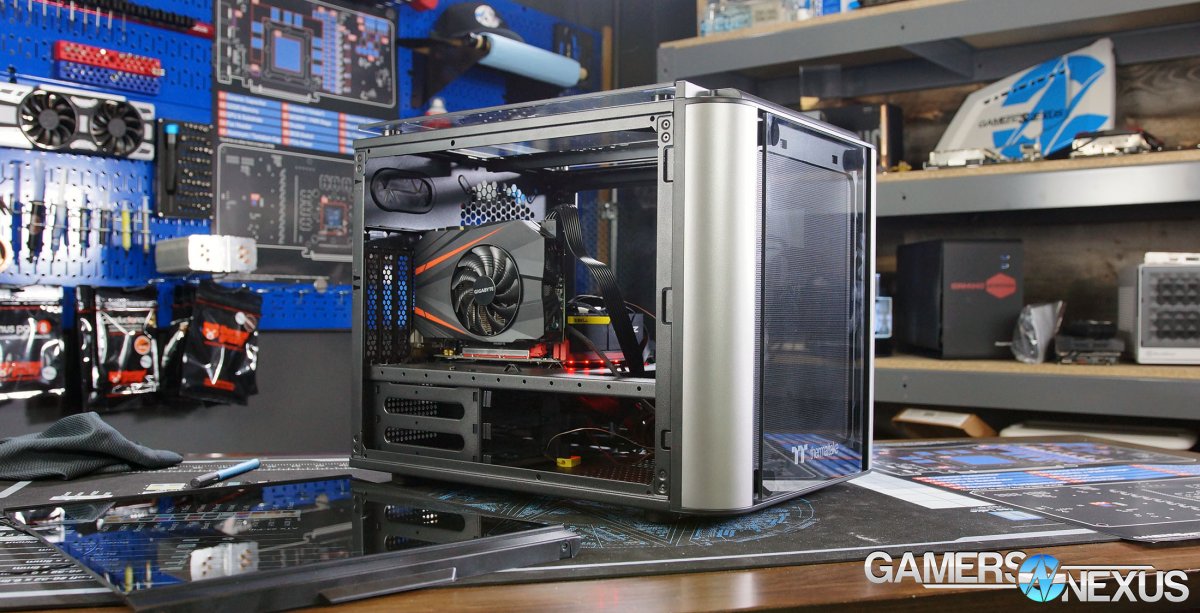 The panes of glass are mounted to metal frames that attach to the chassis, so there are no holes or screws through the glass. There’s also nothing to prevent the side panels from flopping off once they’re unscrewed, but that’s much more forgivable with the small and relatively light glass panels in a small form factor case. The top pane in particular is lifted away from the body of the case to allow airflow, similar to the View 71.

The side and bottom panels are swappable like they were in the V1. The case can be placed on any of its sides by moving the “bottom” panel, and the side and top panels can be swapped around as well. This feature is important because only one glass panel (the stock top panel) has an air gap for fans and radiators, but this panel can be moved to any side of the case. The I/O is attached with a single screw and can very easily be installed on the top, left, or right of the case, which means the front panel can be rotated as well. Front I/O is adequate, but includes two USB 2.0 ports and no USB Type-C.

There are four metal rails that can clip into the top or sides of the case. A pair of them can be attached to a radiator or some fans, which then clip onto the chassis. The concept of a semi-toolless radiator mount (the rails still have to be screwed onto the radiator) is great, but the rails themselves are a little thin and rattly. Hopefully Thermaltake continues to develop this feature, because we do praise the ease-of-use and modularity. TT clearly intends the VT to support liquid cooling, and it even has an old-school grommet on the back of the case for externally mounted open loops.

Thermaltake’s modularity is a major upside in the Level 20 VT. The case’s completely interchangeable panels allows configuration in whatever layout the user wants, which is rare in small-ish cases (because, let’s be honest, this isn’t “small”). Thermaltake gets big credit for modularity of design and build quality. 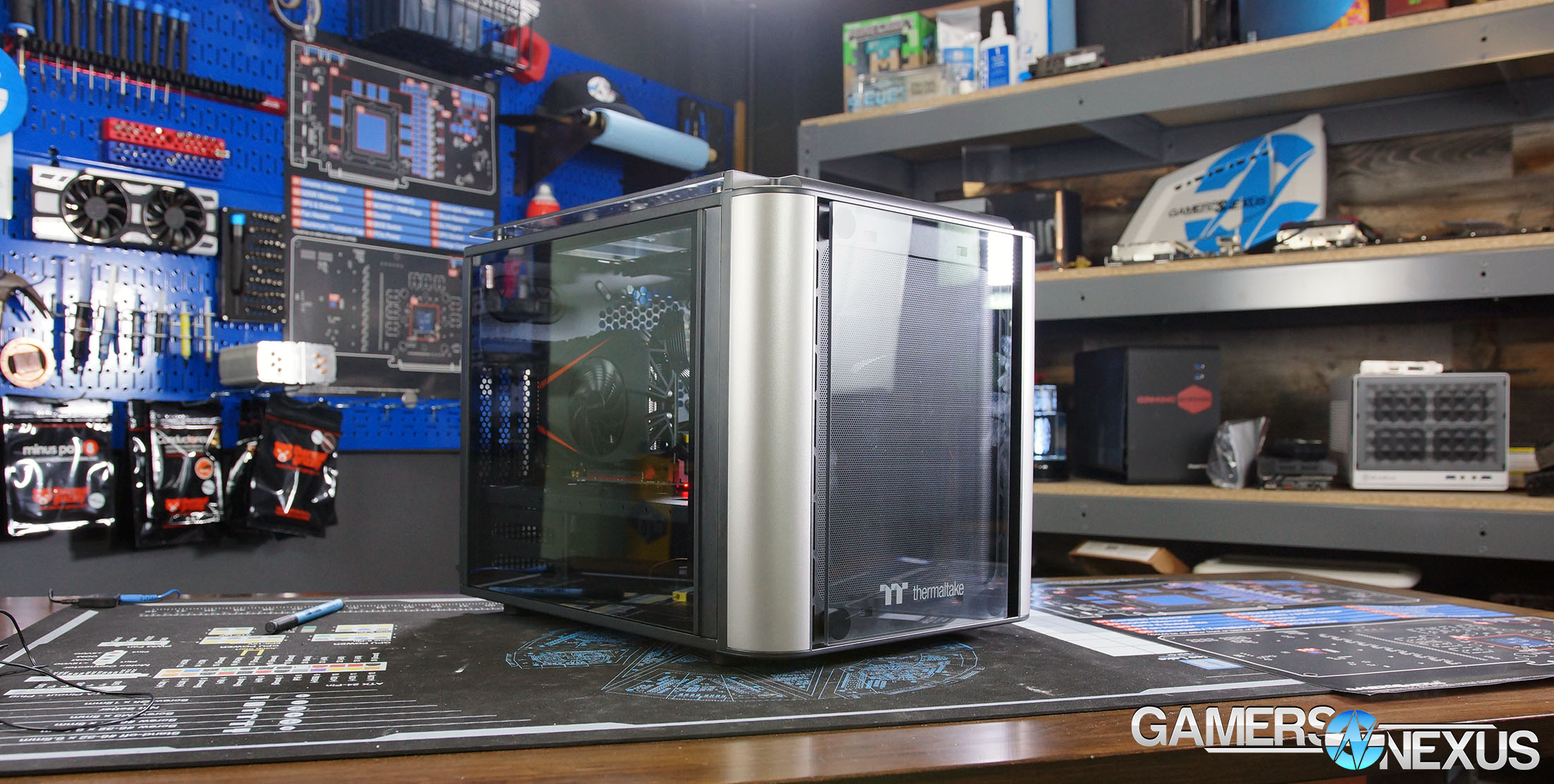 Stock cooling is a single 200mm fan at the front of the case, behind a glass panel, so it’s a mixture of a natively low-pressure solution with a means of impedance. There are minimal ventilation strips to either side of this fan and not a huge amount of clearance between the fan and the glass, which is usually bad news for big fans with low static pressure. Check the thermal section for those results.

We mentioned in our 280X micro ATX review that since the case was barely small form factor, it wasn’t 100% fair to compare it to the extremely compact mini ITX cases on our chart. Like the 280X, the VT’s volume isn’t overwhelmingly smaller than a normal mid-tower, but like the V1 it takes advantage of the motherboard’s shape to fit into a squat cubic shape. The VT doesn’t feel like it’s just a regular mid-tower shrunken down. Since our SFF test bench uses all mini ITX compatible parts, there was more than enough room inside the case. Even with the maximum motherboard size, the two-chamber design would leave plenty of space underneath to stuff cables.

Drive space is also extremely generous given the form factor. Space for three 3.5” HDDs makes this a possible candidate for storing media, and there are three 2.5” sleds besides that. These are attached to a track along the side of the case and can be moved around on it for optimal cable routing.

Noise testing is still being refined, as we’re somewhat bound by the CPU cooler right now (more than the cases). Anything involving noise -- which will primarily be focused on in future reviews, not this one -- is measured at the usual 20” distance range for our testing. The noise floor is ~26dB.

Thermal testing is where it gets more detailed: We’ve added frequency over time charts for GPU core clocks, useful for determining the impact of poor cooling, and we’ve also added VRM thermal measurements by placing thermocouples on the MOSFETs. This will mostly help to identify weak spots in case cooling capabilities. As always, all tests are conducted for a minimum of 30 minutes.

The VT has one big 200mm fan in the front that can’t be moved elsewhere, so we didn’t have a bunch of alternate configurations to test. We did want to try swapping side panels around, so we moved them so that the case stood on what had been its left side, with the motherboard in the conventional ATX position on the right side of the case. This is referred to as “rotating” the case below, since the chassis was rotated 90 degrees inside the side panels. Everything inside the chassis was rotated along with it, as was the front panel, since relocating the I/O was a hassle with all the components already installed.

Note that case testing -- particularly with smaller cases -- is impossible to do in any perfectly scientific fashion that represents all cases. Our MITX test bench is built for properly SFF cases, like the RVZ03, so testing in a large cube isn’t necessarily ‘fair’ to the VT -- it can fit taller coolers, it can fit water coolers, and those aren’t accounted for. That said, we can still standardize to our component set, and that still offers value. 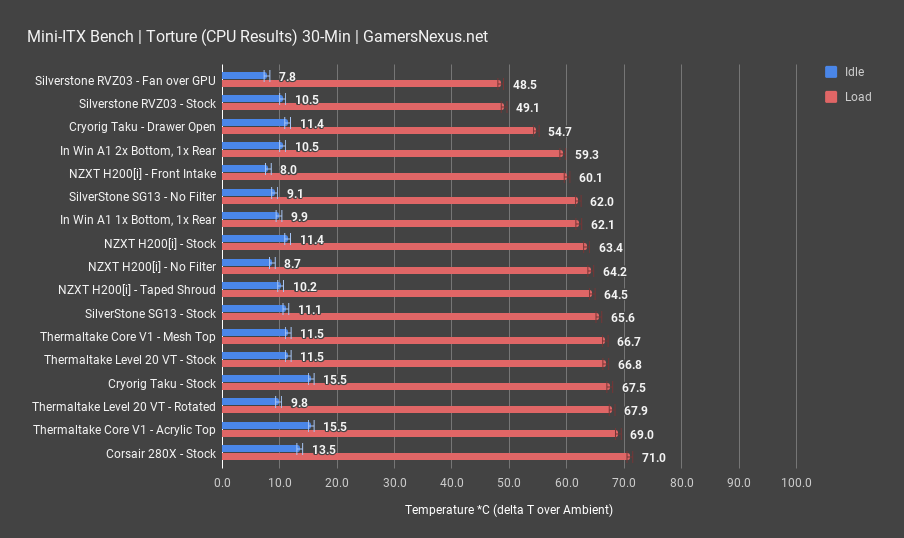 Focusing first on just the VT, torture testing brought average CPU dT to 66.8 degrees Celsius over ambient on the first pass and 67.3C on the second. Rotating the case slightly raised temperature to 69 degrees due to minor airflow changes. Although the case fan was in the same position relative to the CPU, the top panel (which has the widest air gap) went from being above the CPU intake fan to beside it with the rotation. This changes where the air escapes the case, and can cause a draft that pulls some cooler intake out prior to hitting the CPU fan.

Relative to the V1’s CPU temperature average of 69 degrees, the stock VT was slightly cooler. This is partly because the case is larger and there’s more space for air movement around the CPU cooler, but also because the stock V1 has no ventilation on the top panel; in fact, the closest CPU average to the VT was the V1 with the mesh panel placed at the top of the case. That’s on the warm end of the SFF cases we’ve tested, and is consistent with other cases that don’t have a case fan aimed directly at the CPU, like the Taku and SG13. 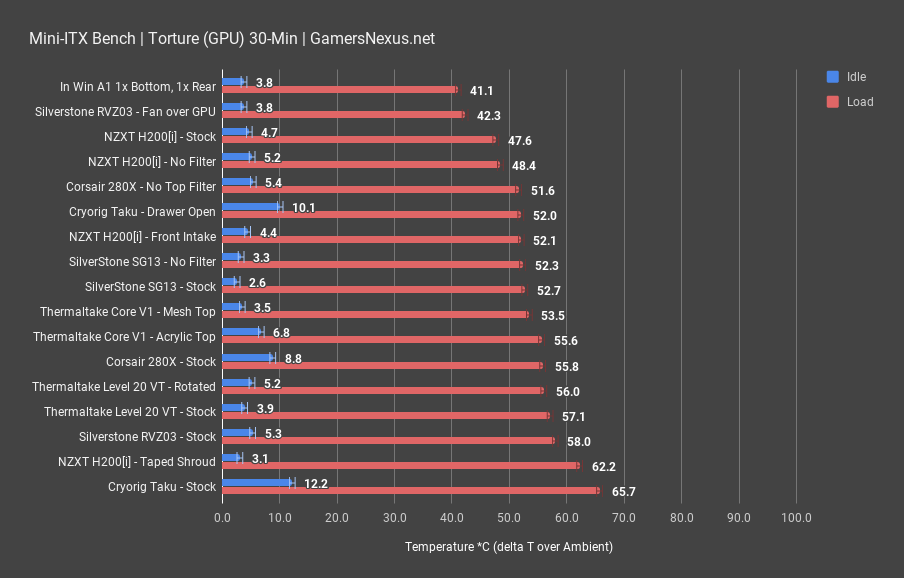 The GPU torture results were extremely consistent between runs, averaging 57.1 degrees Celsius dT the first time and 57.2C dT the second, but rotating the case lowered it to 56C dT. It makes sense that rotation would help GPU temperatures, since the GPU intake fan was pointed towards the ventilated bottom panel rather than the flat glass side panel, but a 1.1-1.2C improvement is only barely outside the margin of error.

The VT’s GPU dT average is warmer than the V1’s average of 55.6C dT, but the V1 in stock configuration has vent holes directly facing the GPU fan. The VT is in the high-but-not-excessive range for GPU temperatures, close to the stock RVZ03 without its fan placement adjusted. The case is large and airy enough that our components weren’t roasting like the Taku, but the single intake fan struggles to push enough air on its own. 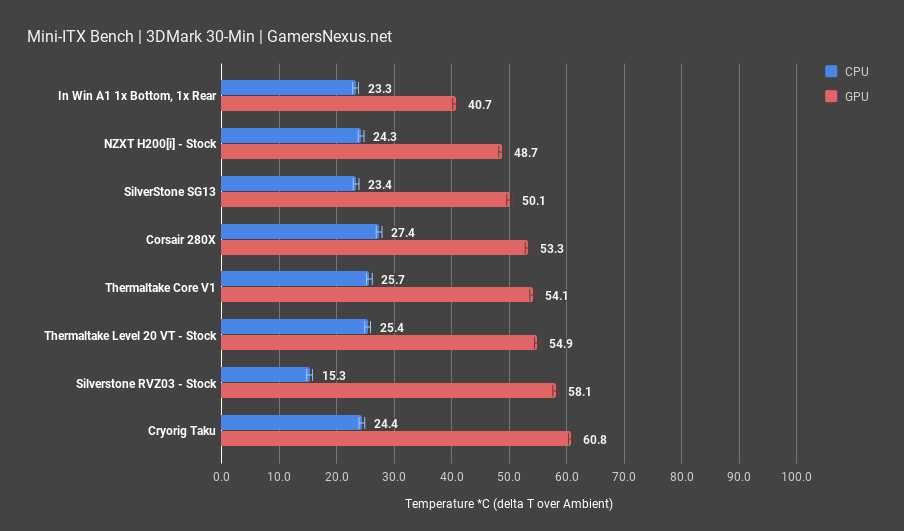 The VT was closer to the V1 in 3DMark than in the standard torture test. The VT averaged 54.9C GPU dT and the V1 averaged 54.1C. GPU clock speed averaged roughly the same in both tests, although we’ve noted barely any variance in GPU clock speed in this test other than with our In Win A1 baseline test, which was ~25MHz above the usual 1775MHz average. Again, this GPU average is well below the Taku but warmer than the SG13 and 280X.

Rendering on the CPU, CPU average dT was 50.1, which falls in a gap between the Taku and the SG13, the warmest and (now) third warmest averages respectively. The Blender test is less stressful than the torture test, but this confirms that even under normal workloads heat can build up in the VT.

Thanks to its single 200mm fan and glass front panel, one area where the VT really wins is noise. We measured it at 42.1 dBA, compared to the mesh-fronted V1’s 44.7 dBA. With our current SFF test platform, most of the noise is generated by the CPU fan, and the glass was effective at blocking it.

The stock configuration of the the Level 20 VT runs warm relative to the other cases we’ve tested. It’s a fairly large case to only include one fan, even if it is 200mm, and it could use an additional one. On the other hand, there’s decent radiator support, and liquid cooling could be used to lower temperatures with brute force for gaming.

Beyond gaming, the VT has great potential as a living room PC for storing media on a few hard drives. It looks good and the glass does a decent job of noise damping, while the 200mm fan is quiet and keeps things cool enough for undemanding activities. Build quality is high and modularity is a huge plus that’s unique to Thermaltake. If you can live with the sub-par thermals, it’s OK overall -- we’d just like to see the glass spaced farther from the rest of the chassis.