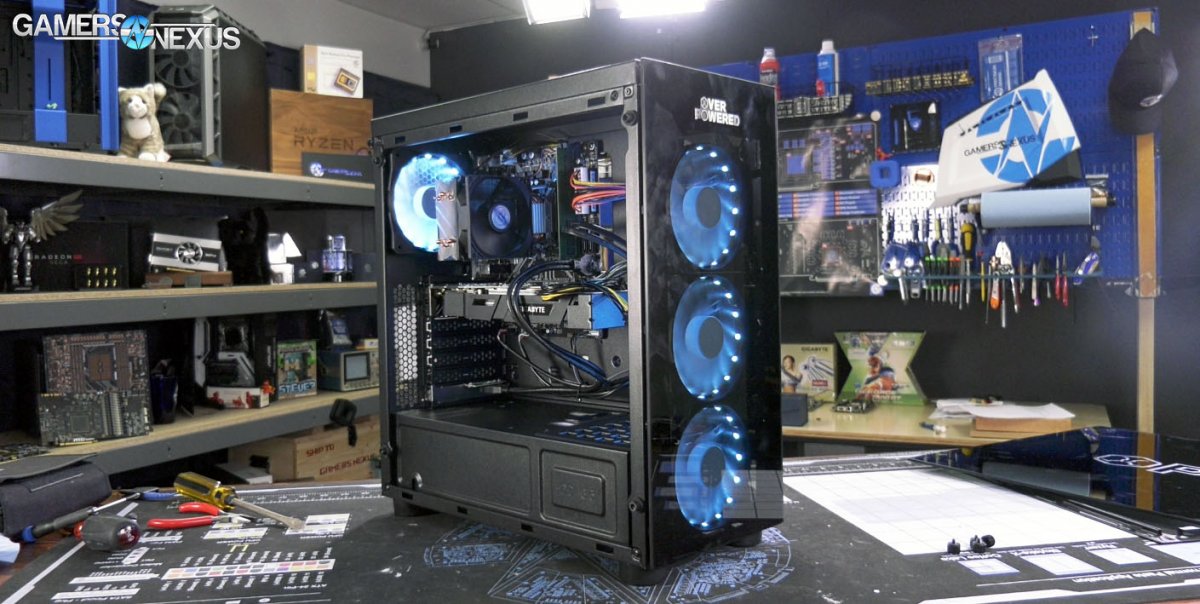 It’s hard to know where to start; undoubtedly, this is also the feeling that Walmart’s PC builders had when they opted to hot glue the USB3.0 header into the motherboard. Or perhaps they felt more confusion when faced with the decision of routing the cables, whereupon hands were thrown up and wires were used to ensnare the video card to the PCIe socket. Actually, maybe it makes more sense to start with the case, whose fans have literally 2mm of clearance for air intake.

Fortunately, because we didn’t get the DTW3 SKU with a 1080 Ti, thermals aren’t going to be as big of an issue. The DTW3 should produce at least 70W more heat load inside the case, and not having to deal with that will reduce thermal concerns markedly.

That’s not a compliment.

Let’s start here: We’re working on full testing for these systems, but we first need to finish the replacement and return process with Walmart. Our order was for the DTW3, shown below:

What we received was the DTW1, shown below:

And what we paid was this: 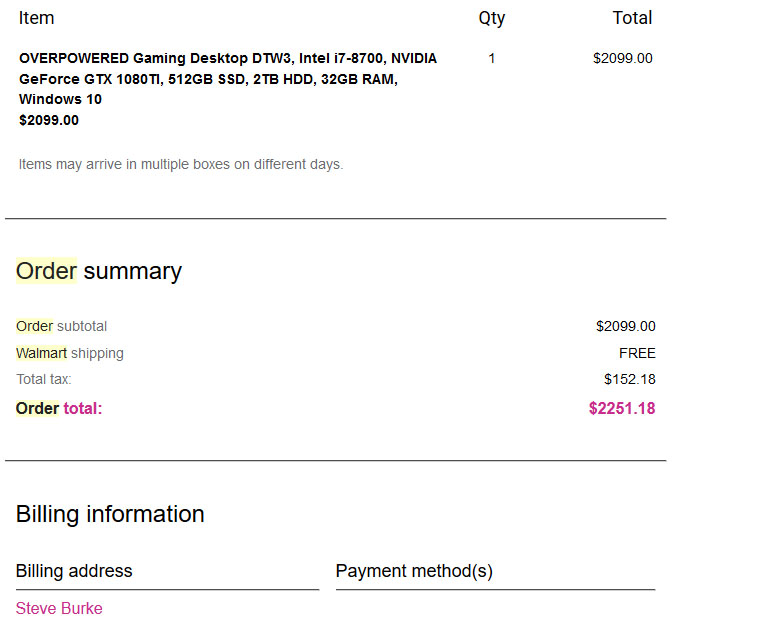 Focusing on build quality today, we start with component selection. Walmart’s double-outsourced and once-subcontracted PC builder elected to instantly enfeeble the sum of parts by using an Intel H310 chipset, heralding from the Gigabyte H310M S2 motherboard (which is somehow ~$70 retail). An instant reaction might be that this doesn’t matter, seeing as the CPU is an Intel i7-8700 non-K, locked CPU, but further inspection betrays this belief. The H310 chipset runs a bus speed of ~5GT/s over DMI2, whereas any other Intel chipset – like the equally cheap B360 variant – runs 8GT/s over DMI3; in fact, the H310 chipset was recently the top candidate for re-awakening the 22nm fab that Intel uses. If that doesn’t tell you how low-end this chipset really is, nothing will. Intel deemed it weak enough to not even need 14nm production, and elected to save dwindling 14nm fab space by pushing some of the H310 production back to 22nm. 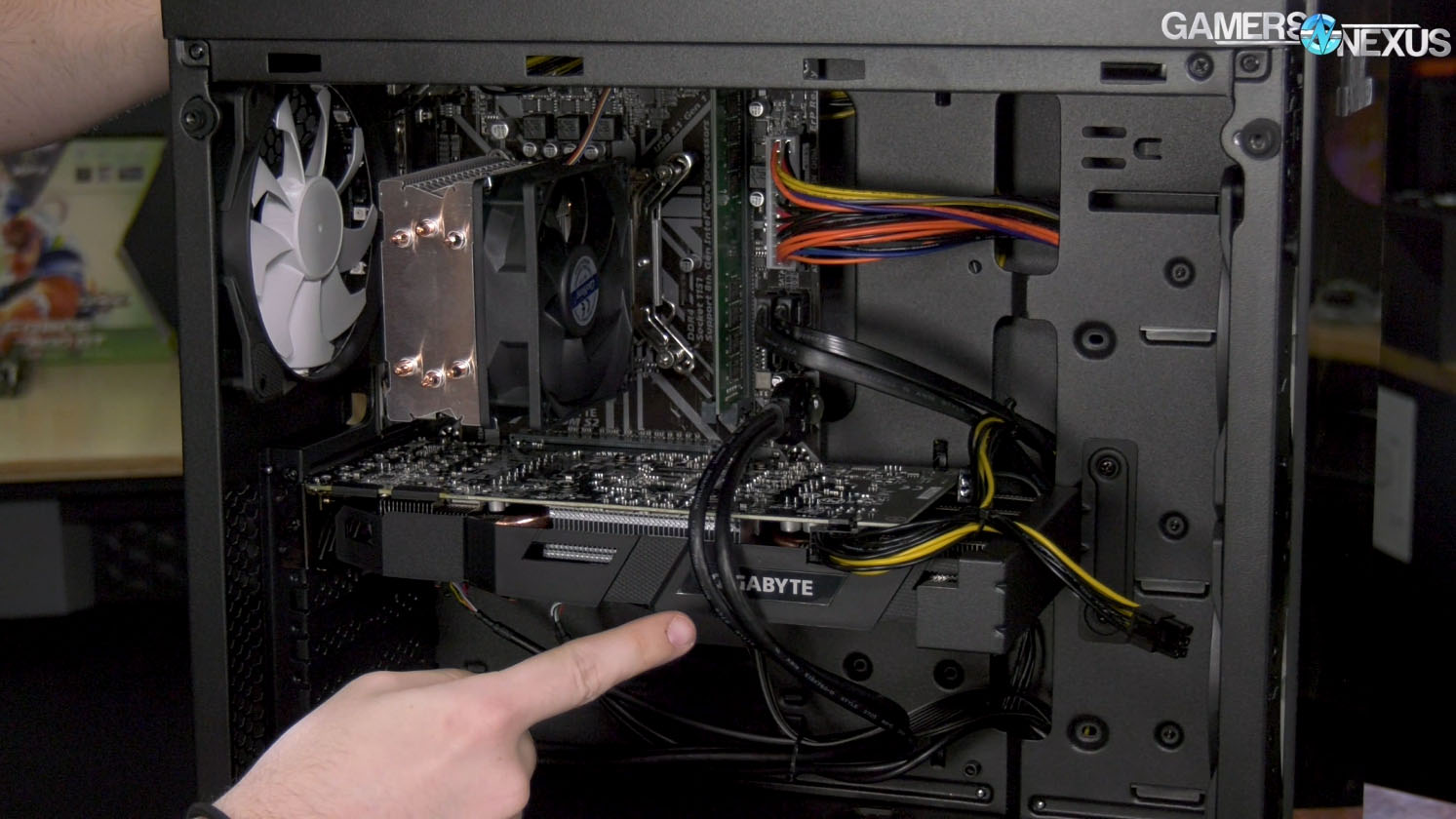 That isn’t a good chipset.

Further still, H310 can only peel-off 6 lanes for PCIe from the chipset, whereas B360 can pull 12 PCIe lanes. H310 can’t host as many USB ports, particularly Gen 3/3.1. More critically, it also can only host 1x DIMM per channel (1DPC), limiting boards to just 2 DIMM slots. Assuming the actual DTW3 uses the same motherboard, because it probably does, that means a 32GB Walmart system probably rocks 2400MHz memory in two slots.

We don’t have to guess, though, because we have the DTW1, and it does run 2400MHz of 16GB in a single slot. Further, Walmart’s own support staff clearly have no damn idea what they’re talking about, because the product lists the memory as “2400GHz.”

And lest anyone think this number just a typo, we present to you the official Walmart response to a joke comment left by a user: 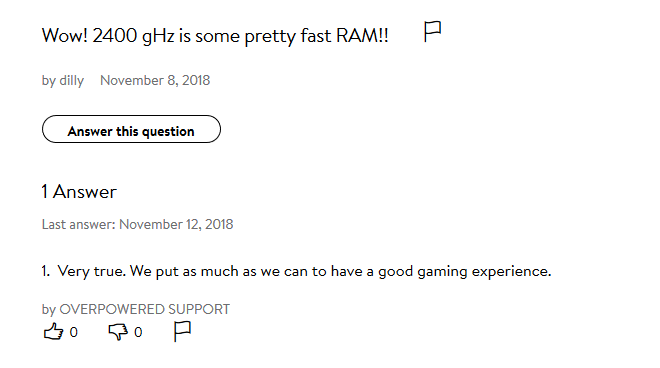 The case comes from Great Wall, as does the PSU, both of which are bought unbranded from the supplier. Great Wall’s PSU does not bear the 80 Plus certification sticker and carries no guaranteed efficiency rating, although it is listed on their website as "80 Plus Bronze" -- it just doesn't have the sticker on the PSU, which is paid for with the certification. In the DTW1, this is rated for 500W (or 21A on the CPU, so 252W down EPS12V). The DTW3 allegedly uses a 650W Great Wall PSU, but we won’t know for sure until Walmart replaces our system with the correct unit. The power supply runs some of the ugliest cables we’ve seen in years and, while this isn’t really that much of an issue (the PSU itself is more offensive), one would hope that a $2100 computer would at least look nice. Markup on this thing is completely insane, even for a system integrator. Incumbent competitors like iBUYPOWER offer an RTX 2080 and i7-9700K at a cheaper price of $1700, but also include brand-name PSUs, motherboards with Z-series chipsets, and 3200MHz memory in multiple slots. For the same price, Walmart uses unbranded PSUs without any efficiency ratings or certifications, 2400MHz garbage-bin RAM, and an H310 chipset with half the bus transfer speed as baseline. The Overpowered DTW3 and DTW1 (and presumably DTW2) are criminally incompetent in their components selection. 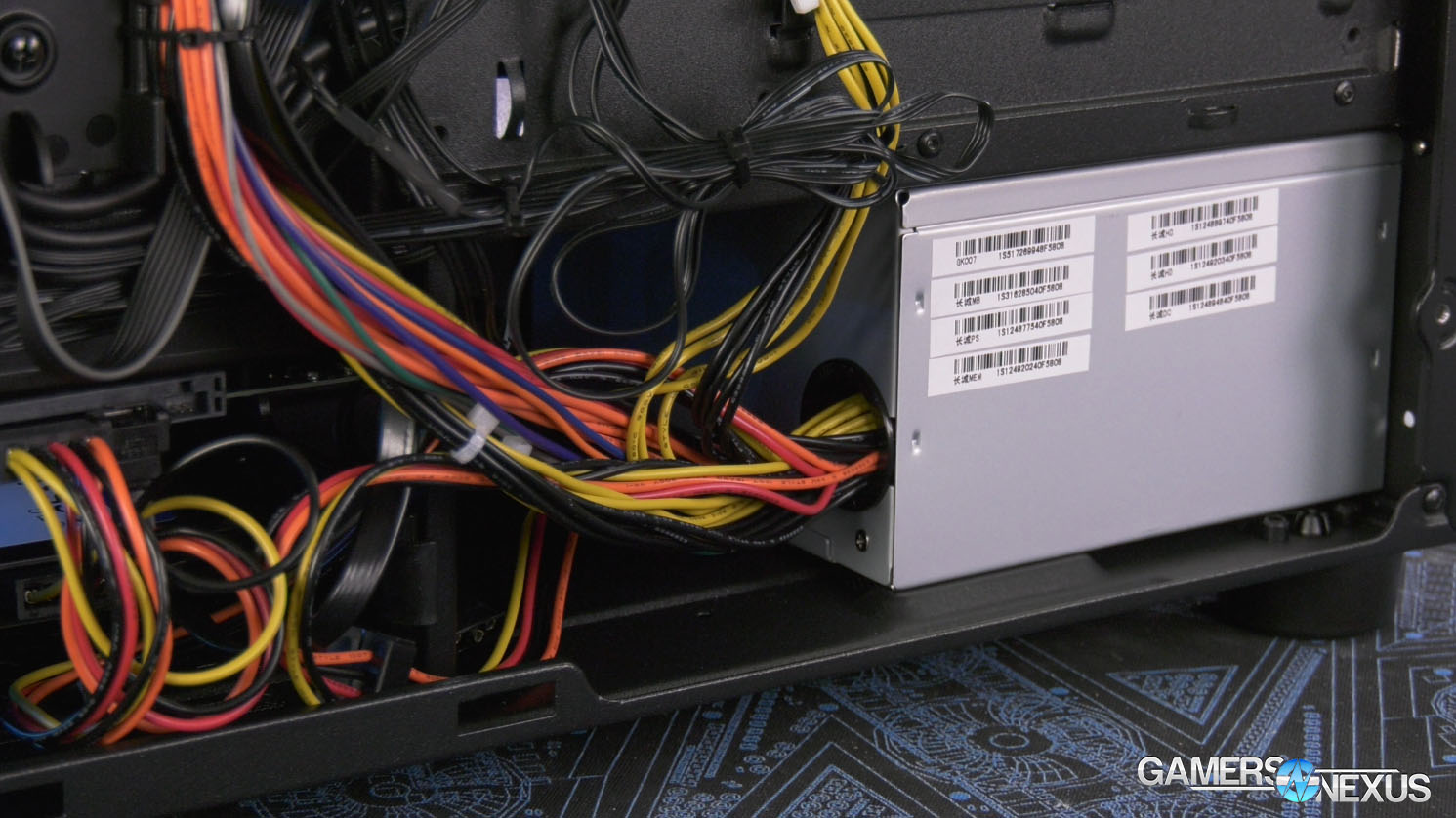 There are so many problems with this system that it’s tough to stay on the tracks.

Getting back into cable management, Walmart’s team (outsourced to eSports Arena, who definitely outsource to someone else to build) resorted to hot glue to hold the USB3.0 header in place. If you buy from any respectable SI – again, we just got that iBUYPOWER system in – they do not do this (anymore). It’s not a shipping concern. Walmart is gluing cables into the ports. That’s utterly insane. The system internals look like an Arts & Crafts project for a five-year-old. 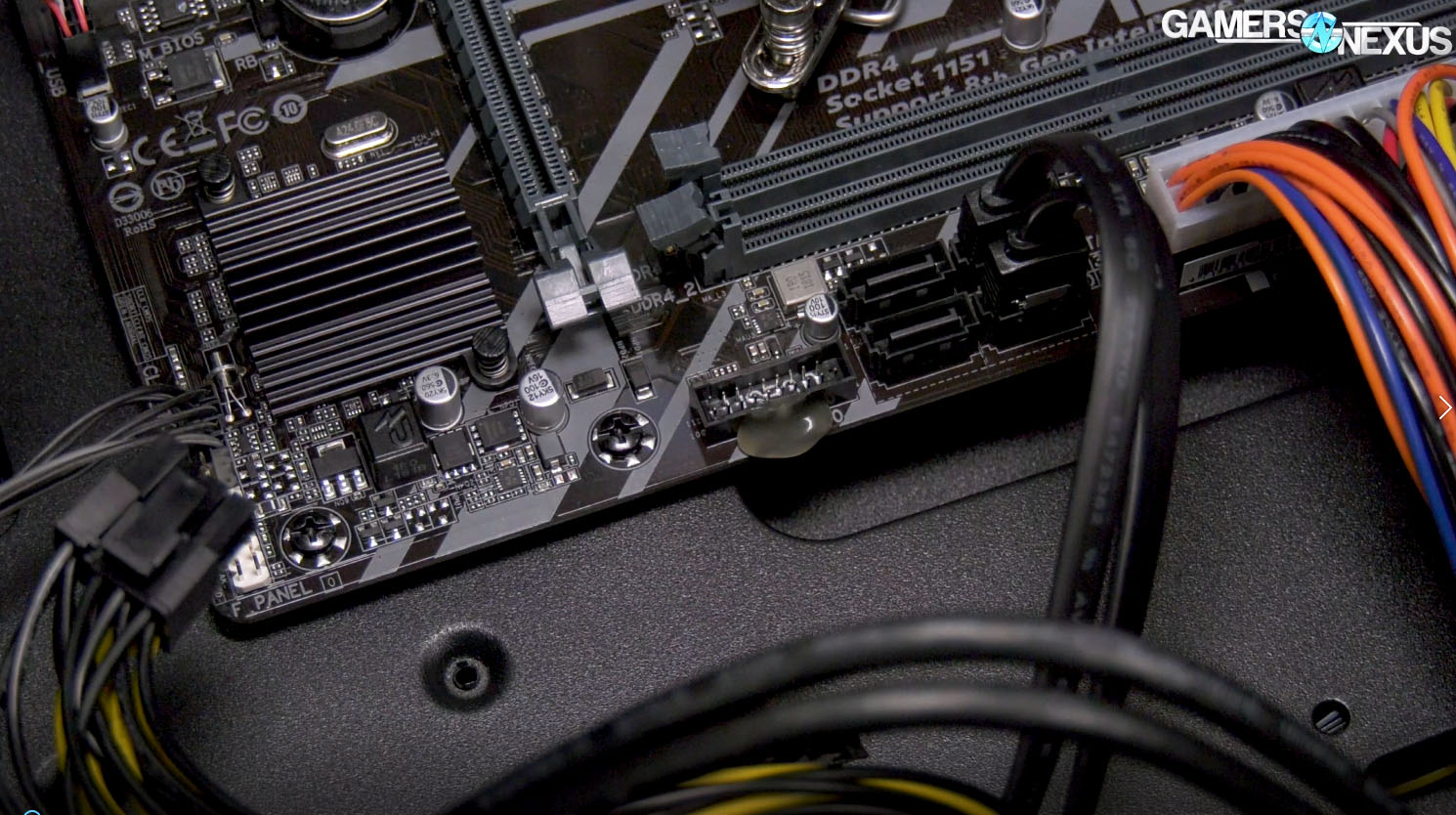 That’s without even mentioning what the USB3.0 header is, you know, doing, because it’s not USB3 to the front panel. Instead, Walmart has elected in its precognition to install a single USB Type-C slot in the back by way of expansion card. “Precognition” because, we think, Walmart needs to check the box that says “USB Type-C” on its spec sheet. This does that, but the unfortunate side-effect is that the system can no longer have USB 3.x front headers, as the motherboard has only one USB3.0 header (which is now wasted). And that’s not to decry Walmart’s included instructions that demand use of USB3 for best “connectivity performance” with a mouse.

Because a mouse, apparently, sends 10Gbps of data.

The Little Cooler That Could

Walmart’s gaming PC certainly isn’t Overpowered, as its name might suggest, when considering its uncertified 500W PSU (with 21A EPS12V rails), but maybe it’s overpowered in its cooling potential.

No. To suggest as such stupid. Sorry.

The enclosure allows for a 2mm gap between the fans and the front panel, between which the void is left unfilled with thanks to a lack of dust filtration. The fans are unbranded and plug into the same proprietary, obnoxious header that Lian Li used to use for its older Bora fans – check it out: 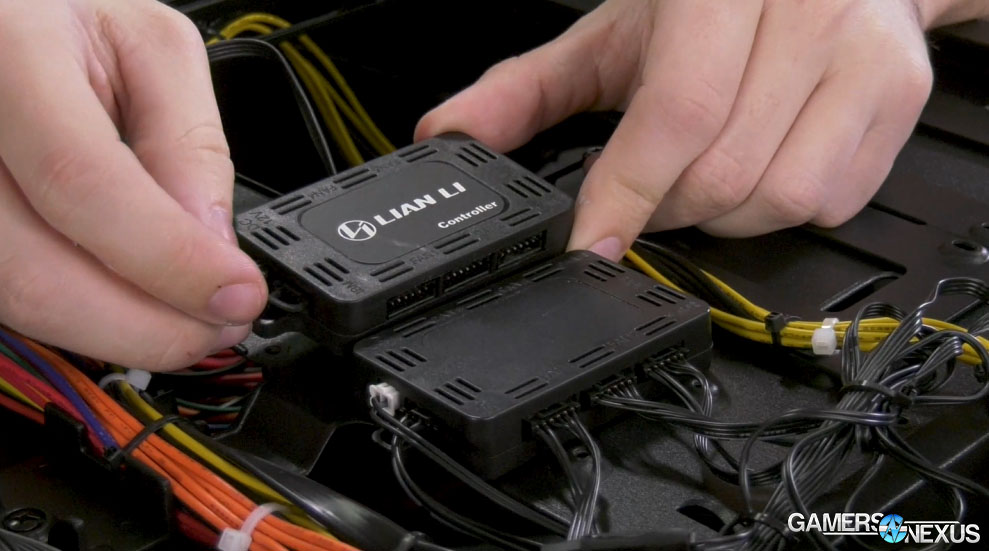 Now, to be fair, all this means is that Lian Li is using the same supplier as Walmart -- but there's a reason Lian Li moved on from this design.

This eliminates the option of PWM control via the motherboard, reinforced by the fact that Walmart rerouted the RESET_SW FPC header to instead jury-rig a power solution for the fan hub. It does not speak to the motherboard. That’s probably a good thing, as it forces the fans to run at 100% and provide the static pressure required to fight that glass panel. We’re far enough along on the P-Q curve that they might be able to brute force some air to the tiny CPU cooler. 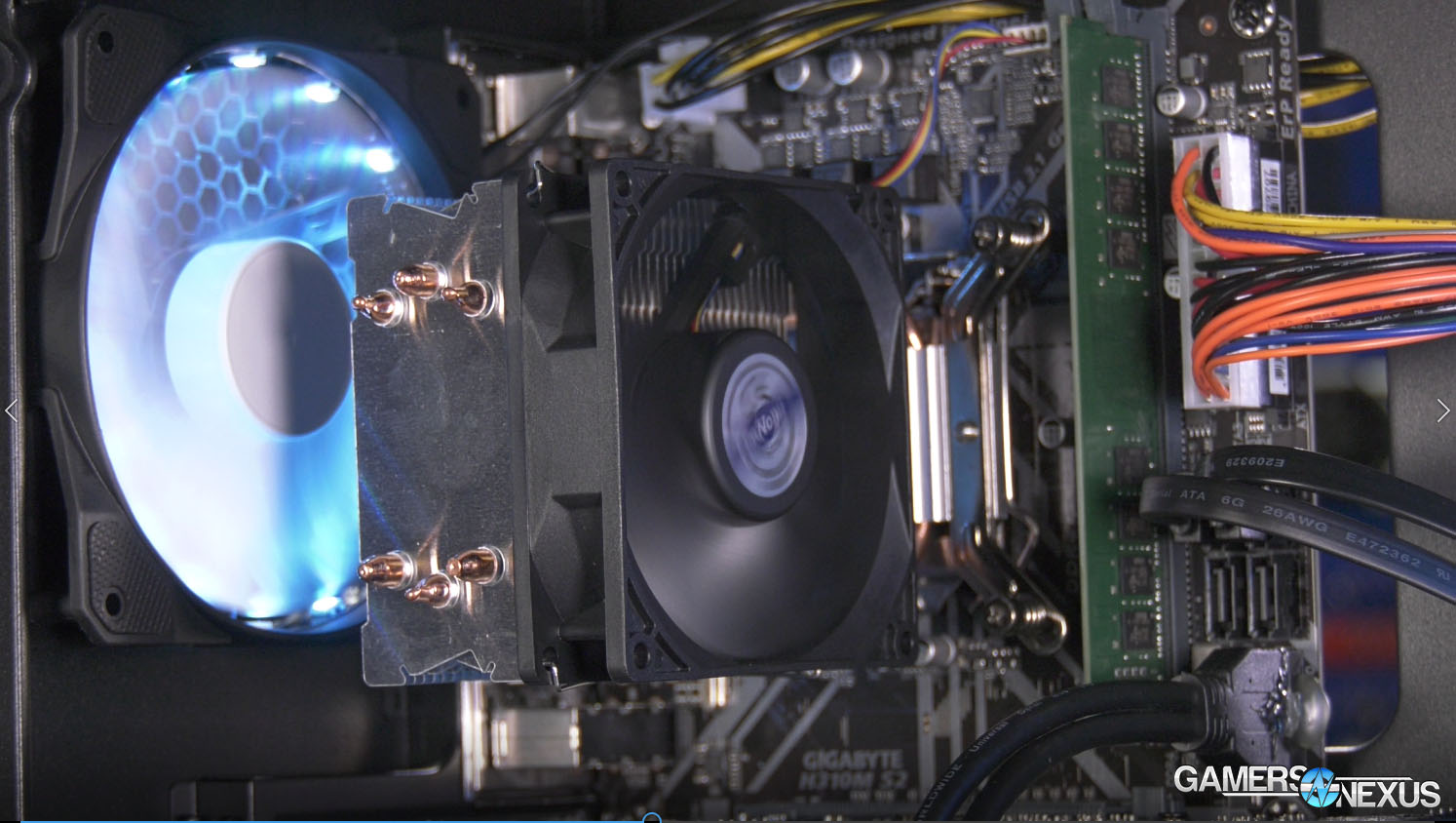 And it is a small one. Unlike most “real” system integrators, Walmart did not opt for an Asetek CLC. No, instead, Walmart stuck a mini-tower cooler onto the socket, branded “CooNong” and equipped with an ~85mm fan (blade-to-blade). It’s enough for an 8700 that is otherwise unfortunately throttled, but only for so long: As these systems age and get exposed to dust and pet hair, and other normal debris of life, owners will discover them clogged with dust at both case intake and HSF intake. There isn’t any dust filtration at the intake fans. There’s actually more dust filtration on parts of the case where there aren’t any fans which, considering this is a positive pressure configuration, makes absolutely zero sense.

We’re probably overlooking some other poor choices that we mentioned in the video, but it’s time to move on to drives.

Surprisingly, there’s no bloatware, so that’s good. Oddly, however, the Overpowered DTW1 comes with its Toshiba hard drive pre-partitioned into 4x ~250GB drive letters in Windows. We’re not sure if this is to give the illusion of more storage or for some less malicious, more incompetent alternative. They did it, though, presumably for a reason.

That’s about it for the hard drive. The SSD is an ADATA ISSS316, which is a relatively innocuous distribution-only SSD. It’s also half of the advertised capacity, but that goes along with the other DTW3 vs. DTW1 screw-ups.

We tried calling Overpowered’s support line, but the offices stop working at 4PM PST (for whatever reason) and, when calling, they don’t specify a time zone. It’s just “we’re closed at 4PM,” which is sort of odd. The answering machine also picks up as “CLO,” and is clearly another layer of outsourcing in the chain of ownership. You look at other system integrators in the market – again, iBUYPOWER and CyberPower are great examples – and their included instructions are practically begging you to call them for support.

CLO didn’t answer, whoever they are, so we deferred to Walmart’s actual support line. This, naturally, led to the usual cacophony of ever-changing robot voices and pre-recorded voices from various individuals, requiring one phone menu after another. Eventually, we got through to a person. After explaining the situation to the individual (that we paid for a $2100 system and received a $1400 system, existing markup notwithstanding), the representative agreed to send us a prepaid shipping label to return the unit for a replacement. This replacement wouldn’t ship until the original was returned, she said, so Walmart doesn’t have a cross-shipping policy in place for their own screw-ups.

Check the video for more detail and check back to this site for our follow-up testing and reviews. Thus far, without even running the numbers, we give this a very firm “don’t buy.”

Skip Walmart. If you don’t want to build a PC, that’s completely legitimate and perfectly valid. Not everyone has to build a PC, but please buy from a brand that doesn’t suck so hard. Good alternatives would include, again, iBUYPOWER, CyberPower, Maingear, Origin, etc.