Motherboards used are varied based upon platform. Where compatible, we used the following:

Although we’d all love to run numerous test benches simultaneously, we have determined that GPU silicon variance can significantly alter results even within the same video card model. As such, we only one run bench at a time, and we always use the same GPU. Driver version 417.71 is used. Adaptive sync is not used in testing.

MCE is always disabled on test platforms, ensuring that turbo boost durations should be running within specifications set by the CPU manufacturer. We also try to keep an eye out for other motherboard trickery, like MSI’s oft-boosted BCLK, and then reset to stock settings when applicable. XMP is used on the Corsair memory in our test benches. 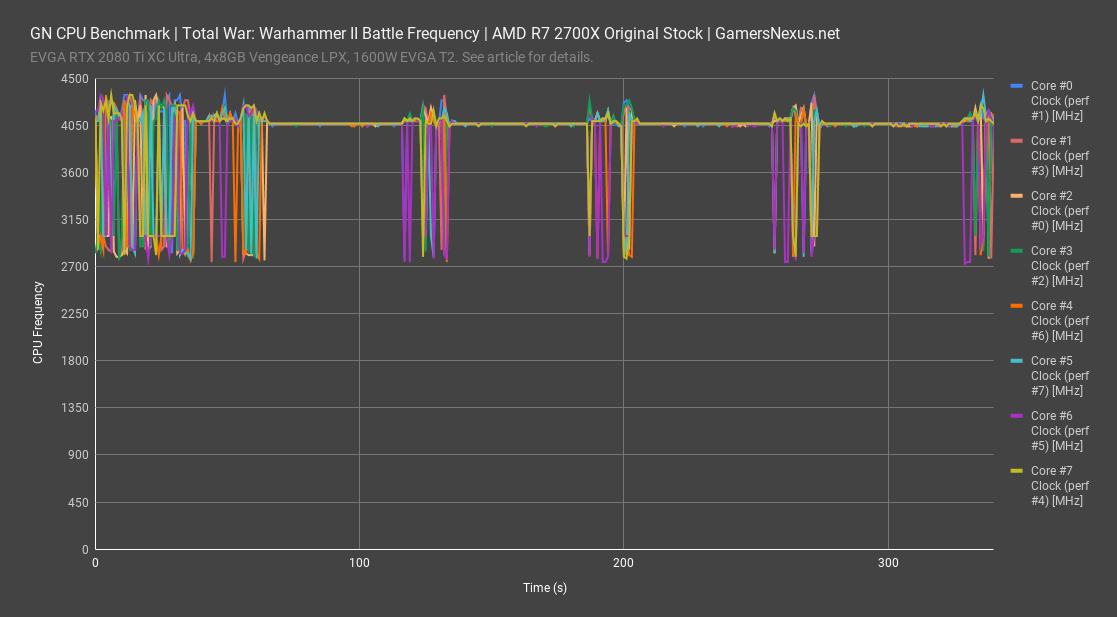 AMD doesn’t claim a frequency difference, so there’s no reason to expect one – but we still wanted to definitively demonstrate the lack or existence of a frequency change in stock operation. We’ll start with frequency validation to demonstrate how all-core behaves on the stock 2700X and the Gold Edition 2700X. In Total War: Warhammer II’s battle test, we observed load frequency at about 4066MHz all-core on the 2700X stock CPU, with single threads under low load boosting to about 4340MHz max, although that was not all-core. The 2700X Gold CPU did almost exactly the same thing. Variance comes into play marginally, but the end result is within 10-20MHz all-core at all times, depending on load level. 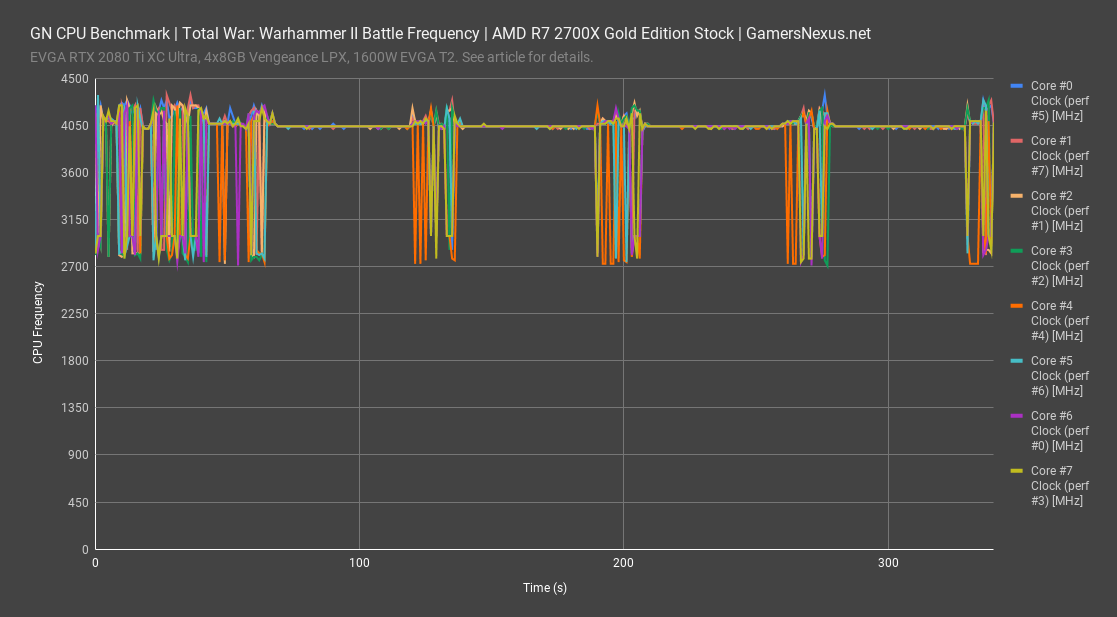 Lest there be any doubts about the 2700X Gold’s stock performance, here’s a quick result listing for our in-house Blender benchmarks: With the GN Logo ray-traced logo render, we observed a time requirement of 28 minutes stock and 28.3 minutes with the gold edition, which is within error margins. These two are the same, unsurprisingly. Just for additional proof, the GN monkey head render also puts the 2700X and the 50th Anniversary Edition within 0.1 minute of each other, or 6 seconds. It’s the same result on the same CPU. 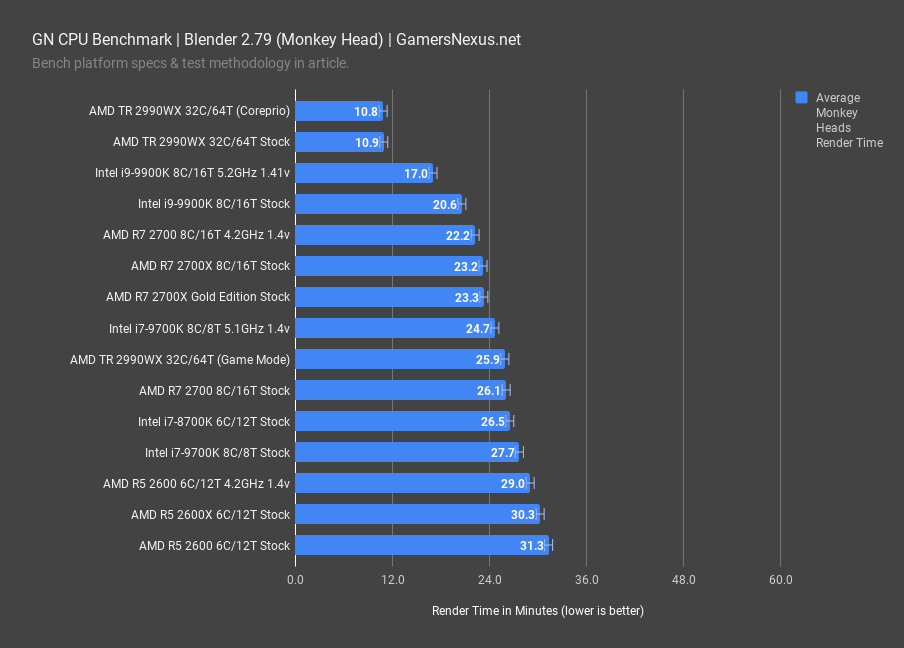 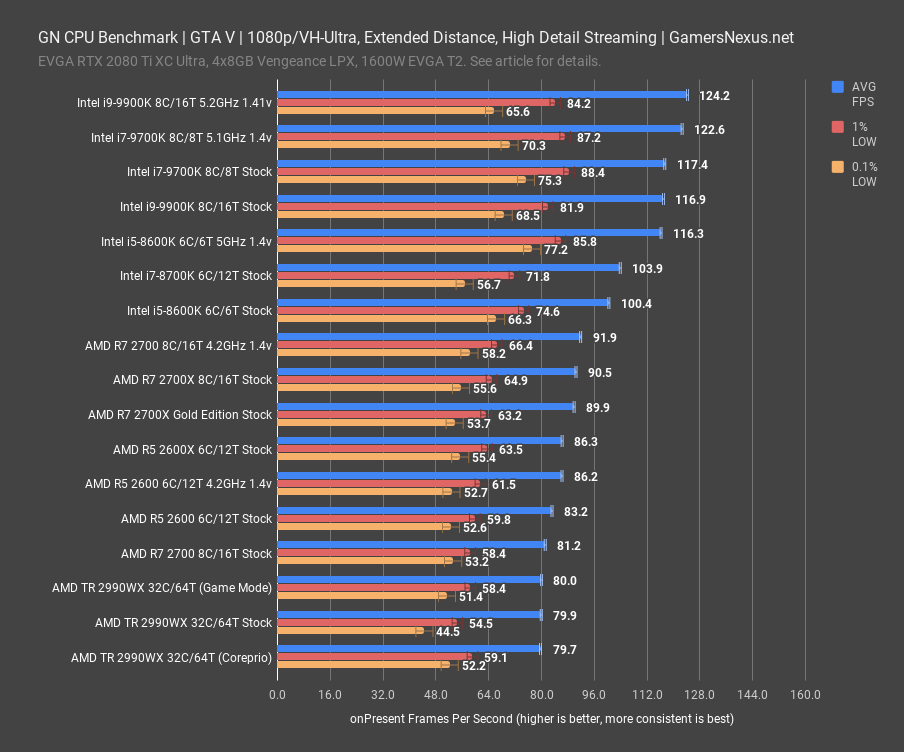 GTA V at 1080p also produced identical results, at 90FPS AVG for the 2700X original and 2700X Gold Edition CPUs. The results are within margin of error run-to-run, so we can demonstrate again that these two CPUs are no different from each other. 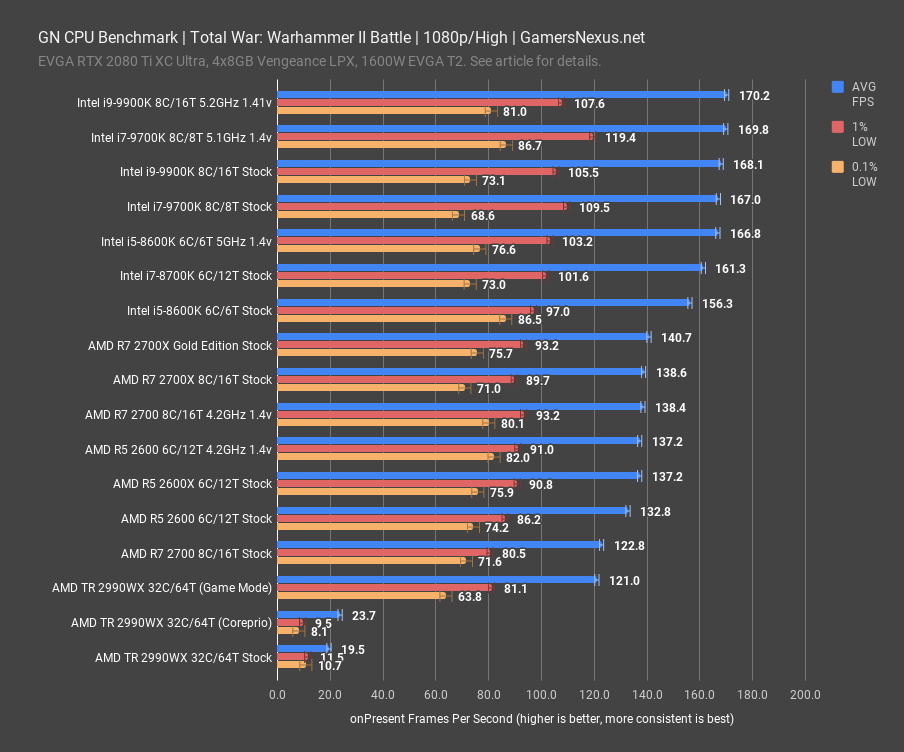 Unsurprisingly, Total War: Warhammer II’s battle puts us within margin of error again, seeing as they’re literally the same processor under the IHS. The 2700X stock runs at 139FPS AVG, with the Gold Edition at 141FPS AVG. We’re within our error tolerance in this game. The lows are also within margin of error. No change, here.

Overclocking is the real question, here. When Intel did its 8086K CPUs, we remarked that they really weren’t worth buying unless you wanted a semi-guaranteed overclock at or above 5GHz. With a normal 8700K, chances were that you were within 100MHz of the 8086K, so the cost difference was tough to justify.

It’s even harder to justify here, because Ryzen is already largely maxed-out on frequency out-of-the-box. Overclocking has a dangerous territory where settling on too low of an all-core OC will result in worse performance in some applications, because XFR and boost can hit 4.2GHz and above. It won’t be on all cores, but an all-core OC will cut off the top-end of that range.

We were disappointed in our 2700X Gold Edition sample. The hope was that it’d be really good, but it’s just not. We couldn’t maintain 4.2GHz even at 1.4125V, and going beyond this would require chilled liquid or a bigger loop than our 280mm CLC. Our 2700 non-X actually performs better, hitting 4.2GHz at 1.4V.

After the disappointment of worse overclocking headroom than a product that costs $220 to the Gold Edition’s $330, we decided to undervolt instead. This table shows the steps taken. We eventually found the CPU to be stable at about 1.24V and 4.1GHz all-core, although at this point, you may be better sacrificing all-core for stock frequencies to hit XFR instead. The only benefit of a 4.1GHz all-core OC is if your workloads are always all-core, like Blender. Either way, both CPUs settle around the same voltage and frequency. The 2700X non-Gold required 1.25V at 4.1GHz, whereas Gold did it at 1.24V. That’s… something, we guess, it’s just not something we wanted.

For what it’s worth, the R7 2700X Gold Edition does come with some small bonuses, like World War Z and The Division 2 Gold Edition – after which the Gold Anniversary CPU is named – with a year-1 season pass. It also comes with the fake signature on the IHS, likely added after initial production of the 2700X that’s probably now overstocked as we lead into 3000-series.

If you had been in the market for a CPU and were wondering if the Gold Edition is somehow special, purely from a hardware standpoint, the answer is “no,” and further, “save your money” unless falling into a few categories. Those categories are: (1) You’re an AMD fan to the point that this product has some sentimental or personal meaning to you and (2), you were going to buy the included games anyway, at which point this would be a cost-saving move.

That’s about it for this one. Pretty simple.