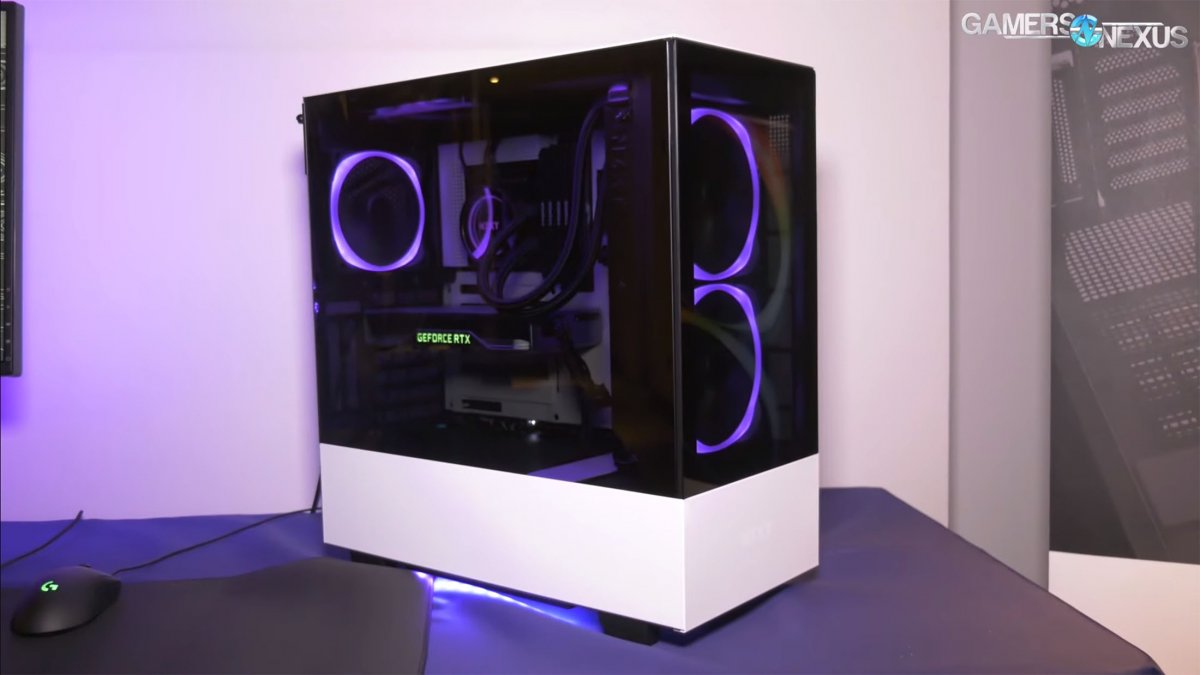 We’ve been speaking of the AMD 16-core CPU since our coverage started this past week, but AMD never officially announced the product. What we know now is that (1) motherboard manufacturers have 16-core CPUs in-hand for testing, (2) if it launches as a retail product, it will likely not be during the July 7 release date for the other Ryzen 3000 parts (but we aren’t sure -- probably later this year, though), and (3) AMD accidentally confirmed that the AM4 platform started on 4 cores, and has now “quadrupled” in just a few years. This was in a conversation with GamersNexus at Computex.

All totaled, it exists, it’s just a matter of when (or if) we see it in retail.

Speaking with some extreme overclockers at Computex 2019, we learned that Ryzen 3000 series CPUs, including the 12-core, have been nearing 6GHz with liquid nitrogen overclocking. This isn’t particularly useful to know in a practical sense, seeing as we can’t really glean anything from engineering sample overclocks with liquid nitrogen, but it does begin to set the stage for AMD Ryzen overclocking in the 3000 series. We were also told some water cooling and air cooling figures, but will be withholding the information as it’s all with engineering boards and samples, and quite a ways out from launch, and so may be inaccurate by the time Ryzen 3000 actually launches.

NVIDIA will be refreshing some of its cards with Ti options, like the 2070 and potentially 2060, and will also be pushing higher clocked memory for a refresh. We’re not 100% positive if this is what GeForce Super is, but they will be happening around the same time.

News surfaced earlier this week regarding a trademark application filed by Nvidia. Nvidia is attempting to trademark the numbers 3080, 4080, and 5080 as they pertain to PC graphics; Nvidia makes no claim to the numbers outside of that.

Still, as the trademark was filed earlier in the year and it’s still under review, the attempted trademark may be too broad or vague in scope. Trademarking general numbers or letters is typically a hard thing to do, even within a certain context.

Rumors have swirled for months regarding AMD mimicking Nvidia’s naming scheme with the alleged RX 30xx branding for Navi. We know now that Navi will come in the form of the RX 5000-series, but Nvidia likely filed in an attempt to preserve branding for its Turing successors.

The OmniPoint switches achieve this through the use of magnetic sensors, which Steelseries claims are faster than traditional switches. To SteelSeries’ credit, the 0.4mm actuation point of the OmniPoint switches is well below Cherry’s MX Speed switches, which actuate at 1.2mm. As someone who has long used Cherry MX Reds, and then pivoted to Cherry MX Speed switches, I have to wonder how usable a 0.4mm actuation point is.

There will also be a monochrome, OLED display. The display will allow users to see ingame notifications, or alerts from applications like Spotify or Discord. Apparently, it can also be used to display GIFs -- because who wouldn’t want to turn their $200 keyboard into a cat GIF machine?

That aside, it’s nice to see some innovation in mechanical keyboards, instead of the usual “refreshed” RGB models. Steelseries is clearly targeting users trying to strike a balance between gaming and typing/productivity, and it’s an appealing concept. The Steelseries Apex Pro will launch on June 11 for an MSRP of $200. The smaller Steelseries Apex Pro TKL will go for $180.

With AMD setting PCIe 4.0 in motion within the client PC segment, SSD makers and controller vendors alike are all joining the party. Perhaps most notably is Corsair and Phison, who both have products coming in July based on PCIe 4.0, coinciding with AMD’s Ryzen 3000 and X570 motherboards.

Phison announced it would have the first PCIe 4.0-capable NVMe controller aimed at consumer SSDs, and Corsair in turn announced its MP600 NVMe SSD based on that controller -- the PS5016-E16. Specifications on both are currently scarce, but Corsair is claiming sequential speeds approaching 5GB/s.

There is currently no word on endurance, capacity, or NAND type used. Regarding the latter, we could guess it would be 96-layer 3D NAND, as most of the big memory makers began mass producing and shipping the memory late last year. Most importantly, Corsair’s new SSD will be among the first -- if not the first -- available in July for early adopters of AMD’s new Ryzen 3000/X570 platform.

Corsair also finally launched its Hydro-X Series line of water cooling parts, after teasing for well over a year.

Also at Computex 2019 was NZXT, who unveiled its refreshed H-series of cases, as well as debuting a new premium H510 Elite chassis.

The H-series most notable includes an updated front panel I/O, which now brings USB 3.1 Type C Gen 2 ports to the following models: H210, H210i, H510, H510i, H710, and H710i. The “i” models will also get an updated V2 cam-powered controller, or smart device as NZXT calls it. There’s also integrated mounting trays for SSDs and brackets for vertical GPU mounting.

Moving on to the H510 Elite, NZXT’s new case uses tempered glass both at the front and side panels, and the front I/O panel also includes the new USB 3.1 Type C Gen 2 connectivity. The H510 Elite also ships with two Aer RGB fans and one RGB LED strip. There’s also an integrated vertical GPU mount and a removable radiator/fan tray.

Super Flower showed off a 2.5kW PSU at Computex, besting their previous 2kW model, the Super Flower Leadex Platinum built specially for overclocker Ian “8 Pack” Parry. For the uninitiated, Parry is the system builder behind one of the most expensive PCs available for purchase. Parry uses the 2kW PSU to power luxurious dual system builds, and we expect Super Flower’s new 2.5kW platform is destined for some of the same.

As Tom’s Hardware notes, the new 2,5000 watt PSU appears to have a similar platform as the EVGA SuperNOVA 1600 T2. Outside of special system builds like that of Parry’s, such a PSU would only be of use to miners or extreme overclockers.

ARM has announced its successor to 2018’s Cortex-A76, which brought SoC silicon like the Kirin 980 and the Snapdragon 855. The Cortex-A77 will follow, powering late 2019 and early 2020 flagship devices.

Codenamed as “Deimos”, the Cortex-A77 will remain on TSMC’s 7nm node, but will no doubt transition to its 7nm+/N7+ process that leverages EUV. The Cortex-A77 retains most of its predecessor’s configurations, but ARM has reworked the CPU IP’s microarchitecture to gain an estimated +20 percent IPC uplift. ARM also wanted to make it easy for licensees to transition to the new IP. As with all ARM CPU IP, there’s a large focus on power, performance, and area (PPA).

ARM also announced the new Mali-G77 GPU. The Mali-G77 is based on ARM’s Valhall architecture, of which ARM hasn’t been forthcoming with details. ARM is claiming a 1.4x performance uplift over the previous Mali-G76 GPU, accounting for both architectural and process improvements.

Intel is sending some of its Skylake-X models into the sunset, presumably to make room for the new Glacier Lake X-Series of processors Intel announced at its Computex keynote. Glacier Lake details are scant, outside of a release slated for fall. However, Glacier Lake is expected to see Turbo Max span more than two cores, and there will be improved memory performance.

ASUSTor had two new NASes present at the show that are targeted more specifically for running games off of network-attached storage. The NAS series goes by “Nimbustor,” made with both two-bay and four-bay options, each with 2x2.5Gb RJ45 ports. ASUSTor says that the Nimbustor 2 runs a dual-core J4005 2GHz CPU, with the Nimbustor 4 uses a quad-core J4105 1.5GHz CPU. The CPUs turbo to 2.7GHz dual-core and 2.5GHz quad-core.

Part of the marketing is that the new NASes will have low enough access latencies with SSDs that network-attached gaming should be possible without meaningful performance loss. We haven’t tested this ourselves, though ASUStor did have a demo at its Computex booth.

Bykski’s booth was filled wall-to-wall with open loop liquid cooling parts. We sent a team over to capture shots of the new fittings, tubes, and meters at what turned out to be an overwhelming amount of new hardware.

There are blue, red, gold, black, silver, and white fittings of various sizes and angles – including v-fittings and t-junctions – and hard tubing solutions similarly colored. Bykski is also working on OLED thermometers which often have questionable accuracy, but they can look good in the right loop. The monitors were adjacent to pressure gauges with a pressure-sensitive probe for real-time read=back of internal loop pressure. This could be useful for quickly gauging how loop changes impact water pressure or for determining if the loop has gotten too long. We wouldn’t use something like this for the level of accuracy a review needs, but they’re typically OK for quick spot-checks by an end user; that said, we haven’t tested these yet. The same body comes with a flow meter.

New water blocks also were present for CPUs, including Threadripper and HEDT Intel, now including on-block displays for temperature. Fittings releasing this year, prices in US TBD.

Cooler Master has a new PSU presently called “Project Fanless.” The PSU will be 650W baseline, passively cooled and without a fan, but can boost up to 1000W if the user adds a fan to the PSU chassis. The fan has to be 1500RPM maximum speed to reach the full 1000W scale and will be detected by a board within the PSU. Support is for 120mm fans. This is an interesting and unique idea, although the amount of use cases for a passive PSU that can become active with higher wattage is limited. Maybe if you wanted to use it passively at first, then lift it for a future system build later and run it for higher wattage.

Cooler Master has a new lightweight mouse we didn’t talk about, too. The mouse will ship in two models: There’s a 710 model, which should weigh about 52g and cost $50, and a 711 model with RGB LEDs, weighing about 58g and costing $60. The cable will be paracord once finalized, the sensor is the 3389 without custom tuning at present. The mouse body is made of ABS plastic. Whether or not you like this will be highly subjective – if you’re into ultralight mice, it might be worth paying attention to, although the downside is that going too light can begin to feel cheap.