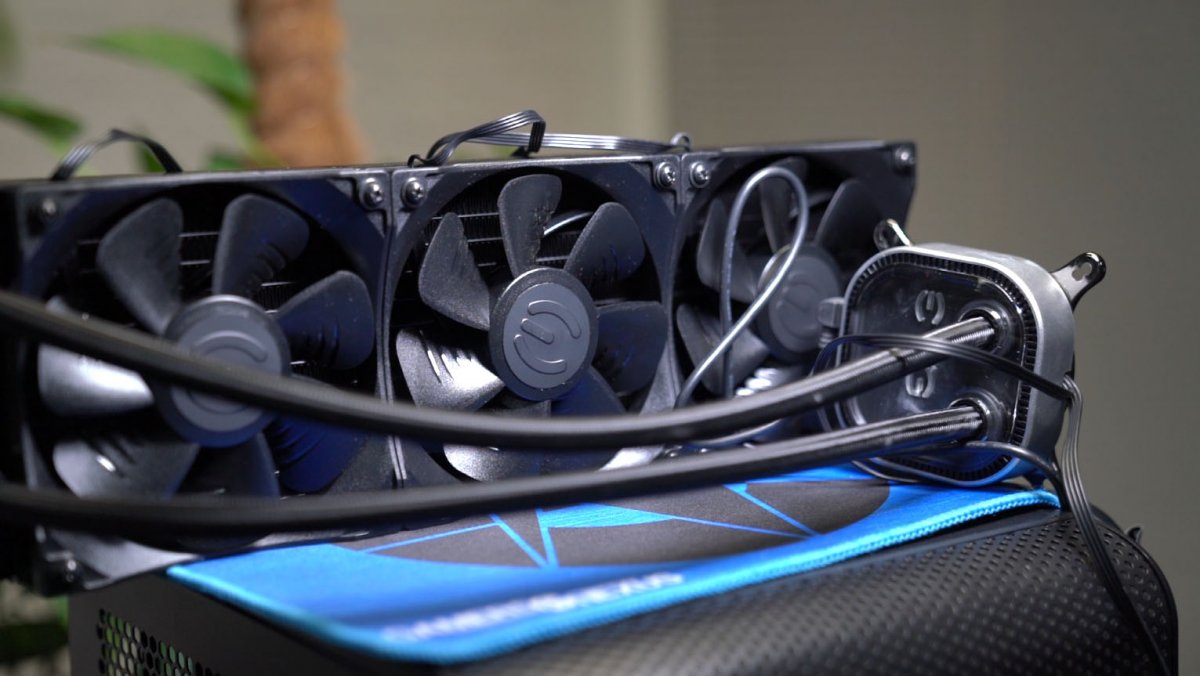 In a world of tempered glass, LEDs, and gimmicks, it’s pretty rare that we come across a fully spartan product that focuses on performance. EVGA has filled that market segment with its DARK series motherboards, named at least partially for their lack of LEDs, and its coolers have traditionally been more price/performance focused than looks-oriented. The CLC series does have a couple RGB LEDs, but only enough to tick the marketing boxes. For the rest, the coolers are aimed at hitting a price/performance mix for the best value. Today, we’re reviewing EVGA’s new CLC 360 liquid cooler to see if it hits the mark.

EVGA’s CLC 360 should be priced about $150 on average, which puts it close to competition like the NZXT Kraken X62, Corsair H150i Pro, and some Deepcool Castle models. EVGA’s CLC 360 uses an Asetek pump at its core and is Asetek-supplied, with the usual customizations on top. As typical, these coolers are primarily differentiated by price, fan choice, and maybe warranty, with some further deviation from the supply by way of LEDs. EVGA has gone relatively spartan with LEDs and looks, instead prioritizing the focus on price and performance balance. With an Asetek Gen5 pump, we’re staying on the plastic three-pronged impeller rather than the newer metal impellers, but performance is overall unchanged between Gen5 and Gen6 – the differences are mostly in focus on reduction of permeation in the tubes. 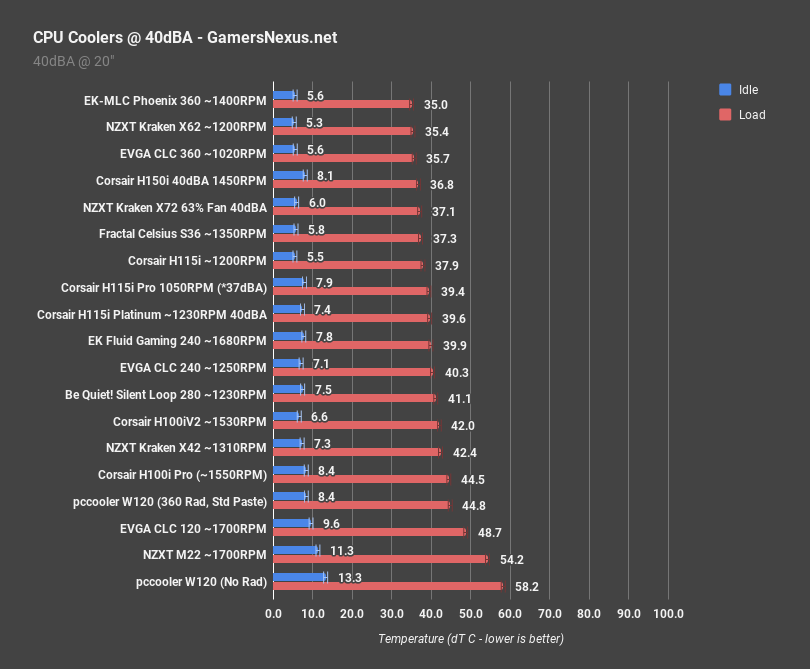 We’ve been testing noise-normalized thermals on liquid coolers for a few years now. This metric allows us to equalize all coolers to the same noise level – 40dBA in a room with a noise floor of 26dB – and so we can establish the most efficient coolers of the bunch. The nature of cooling is that any of these devices could leap to the top of the charts simply by running faster, louder fans, but it’s not exactly fair to proclaim a cooler as being “best” just because it might have Delta fans that go 4000RPM. Clearly, in this ridiculous example, such a cooler would have the best thermals, but would otherwise have untenable noise levels. For this reason, we run one test with coolers all set to the same 40dBA, which results in this chart.

The EVGA CLC 360 runs about 40dBA when its fans are all set to roughly 1020RPM, with the pump still running at max speed. The CLC 360 ends up at about 35-36 degrees Celsius over ambient. It’s been a little while since we’ve run a CLC review, so as a reminder, these numbers are over ambient, meaning we’re taking a delta of the averaged CPU core temperature and the ambient temperature as logged second-to-second. The CLC 360 is within error margins of our 40dBA normalized results for the Kraken X62 at 1200RPM. At this point, we’re within measurement error of the X62, the Phoenix 360, and the H150i. The difference, as always, is now how much additional headroom there is to boost fan speeds and pull-down temperature. We’ll look at the 100% fan speed chart for that. 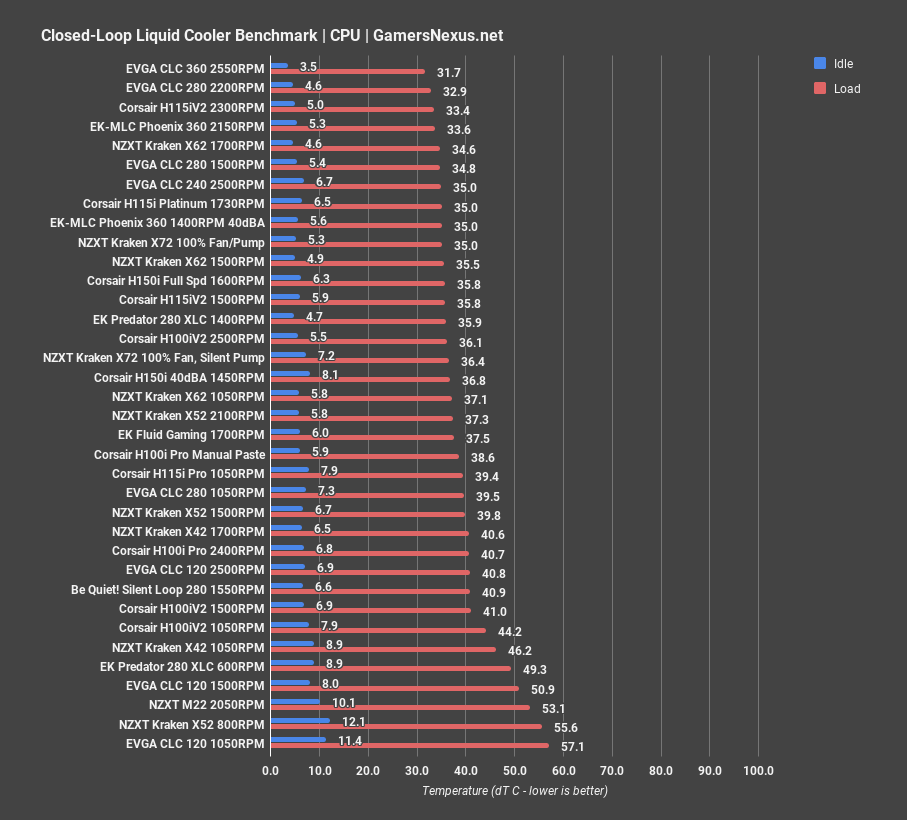 With everything set to max fan speeds, the EVGA CLC 360 and its three deafening 60.4dBA 2550RPM fans manages the best result, at 31.7 degrees Celsius over ambient. This really shouldn’t surprise anybody, at this point, as it’s the loudest cooler on the bench only after other EVGA CLC products. The CLC 360’s 32-degree result has it slightly better than the 33-degree result on the CLC 280 with two 2200RPM 140mm fans. For most users, meaningful differences don’t really emerge until we get all the way down to 240mm liquid coolers, like the Kraken X52 at 2100RPM and 37 degrees, but that’s why we do the noise normalized testing. At a given noise level, the CLC 360 will always do significantly better than those 240mm coolers. If you’re looking for a lower fan RPM to achieve the same thermals, increasing radiator size will almost always help. There are times it doesn’t, but only when the pump is anemic. That’s not the case here. 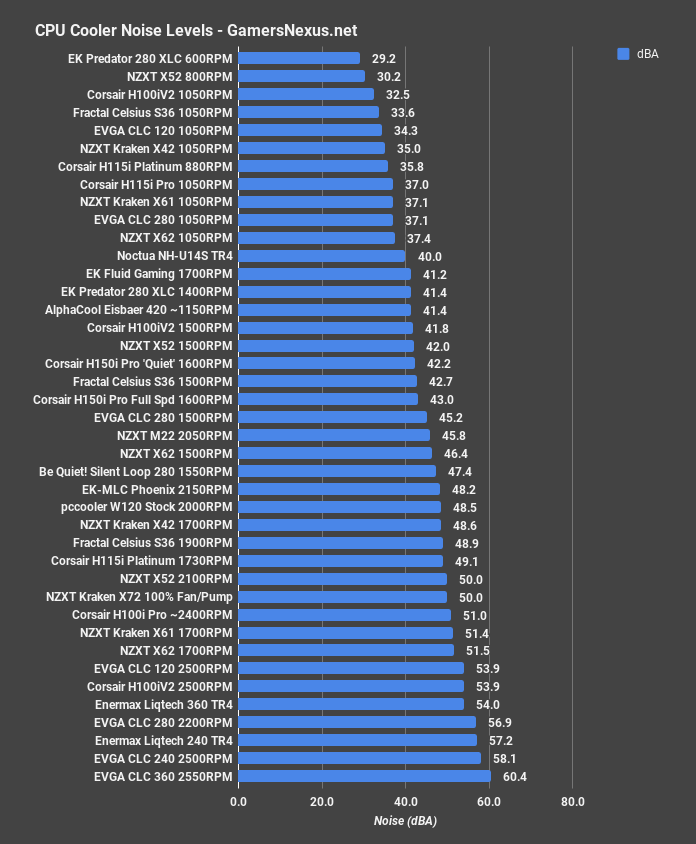 Noise levels will close us out. We already had a look at 40dBA performance, but if you’re wondering what the previous result costs in terms of noise, it’s a lot. At 60.4dBA, the CLC 360 is the loudest on the chart, approached by the CLC 240, to no surprise, really. Adding an extra fan pushes noise up a little bit.

The EVGA CLC 360 is brand new, although the CLC series has been around for a while now. The EVGA CLC series uses a Gen5 Asetek pump, which has the older impeller than the newer Gen6 metal impeller, but also tends to perform marginally better in thermals. Other coolers in this price bracket include the NZXT X62 280mm liquid cooler, priced at about $140, the Deepcool Castle 360EX at $160, and the Corsair H115i Pro 280mm cooler at $140. The EVGA CLC 360’s value isn’t quite as strong as the launch value of the EVGA CLC 280, but still a fine product – it’s just more clearly embattled by nearby solutions. At this price, you’re mostly choosing between the look of the product.