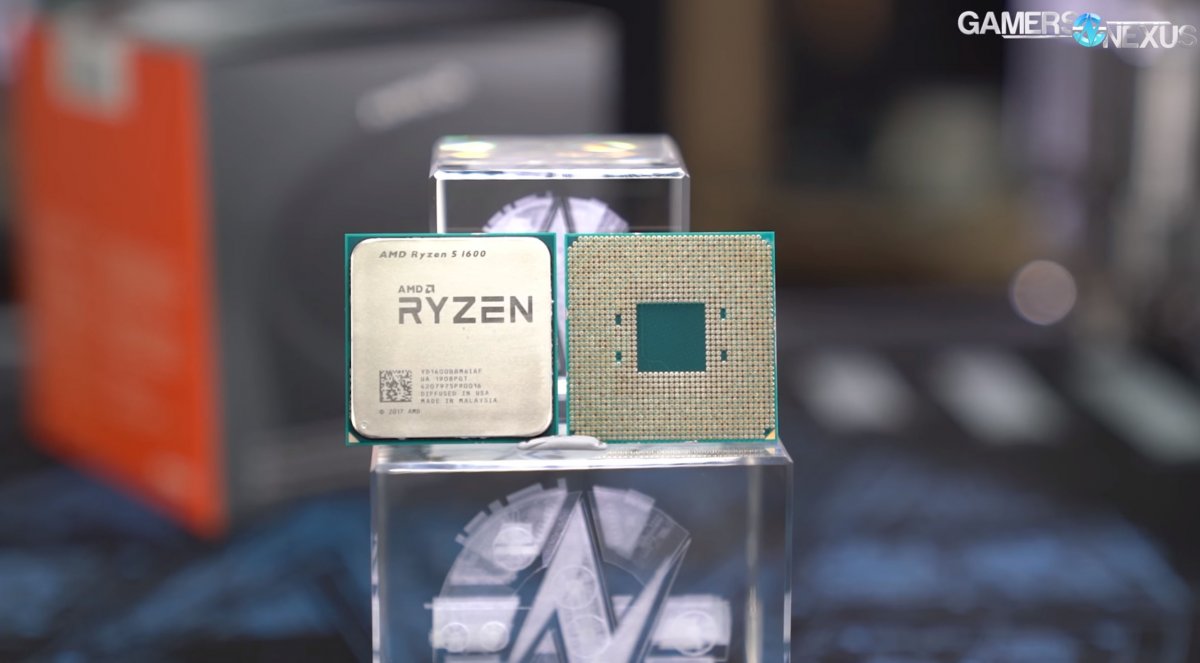 AMD told us that the new Ryzen 5 1600 AF is a 2nd-gen replacement for the 1st-gen part, as AMD no longer has inventory of its 14nm wafer supply, and so has shifted it instead to the newer 12nm supply that it still has. This is also interesting because it indicates AMD is still making some of these parts, and may have still been making 14nm R5 1600 parts.

AMD noted to us that the switch to include the smaller Wraith Stealth cooler is the trade-off and part of the cost savings, but also elaborated that the 1600 replacement on 12nm is more efficient and includes the same cooler as the R5 2600’s stock cooler. Since it worked for the 2600, which is the same other than higher stock speeds, it will also work for the R5 1600 in the same way.

Unofficially, the 2600 might be binned better than the 1600 AF, but there’s no guarantee or formal confirmation of that. Our retail-purchased R5 1600 AF clocked the same as our R5 2600, for what it’s worth, although that’s hardly any sample size worthy of consideration.

We should start with a frequency chart before wasting our time on testing. It wouldn’t make sense to re-do all the testing if the frequencies are identical. 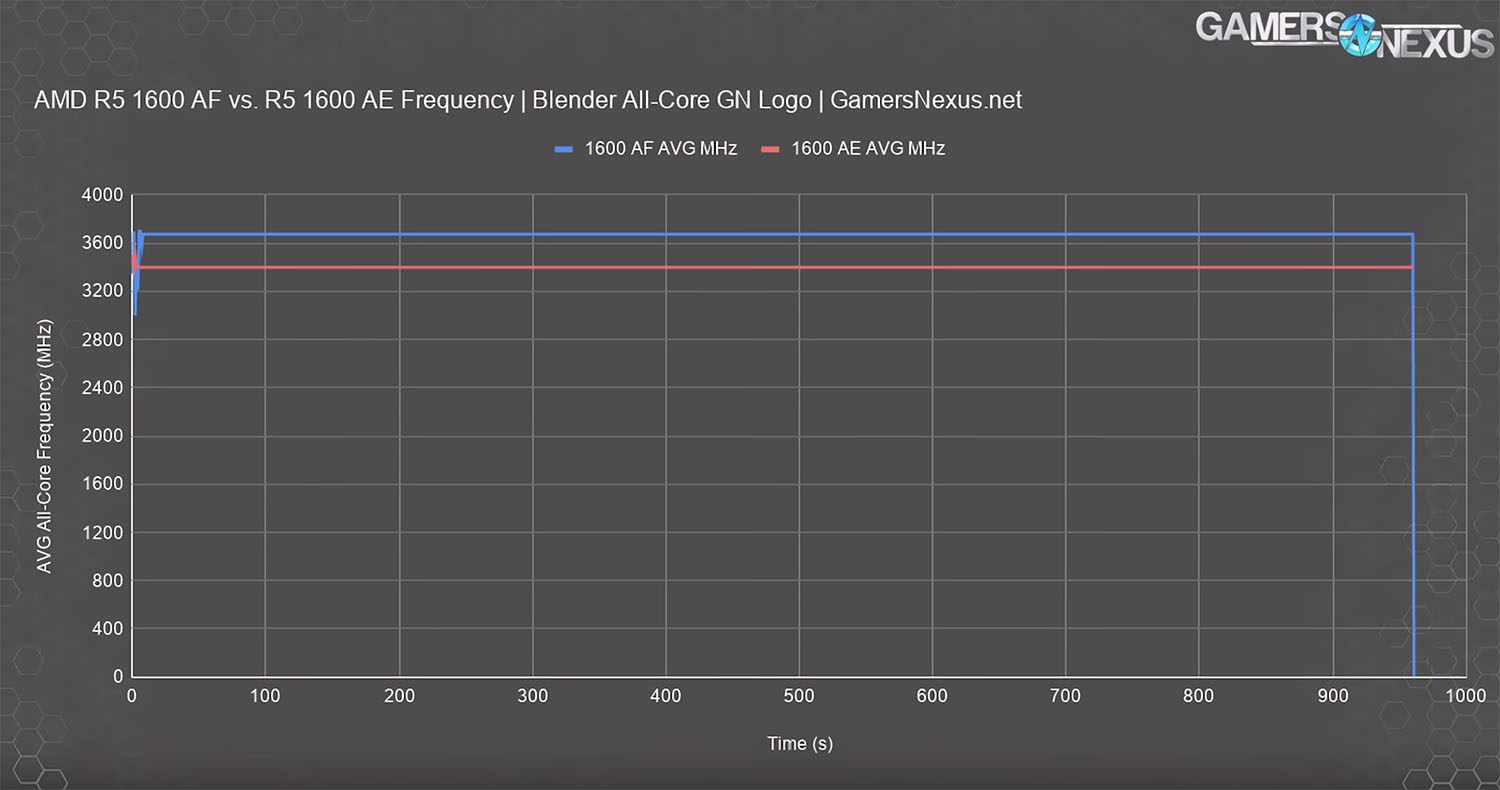 First, looking at an all-core workload from Blender and the GN Logo render, we monitored the AMD R5 1600 AF CPU AVG all-core frequency at 3674MHz flat. There’s no fluctuation here because, unlike Zen2, Precision Boost 2 isn’t working to wildly fluctuate the clock based on every few degrees of change in the die temperature. The AMD R5 1600 AE -- that’s the older one -- plotted at 3399MHz all-core average. There’s a marked gain from the 1600 AF just in the all-core frequency, and clearly the AF should actually be better than the AE. 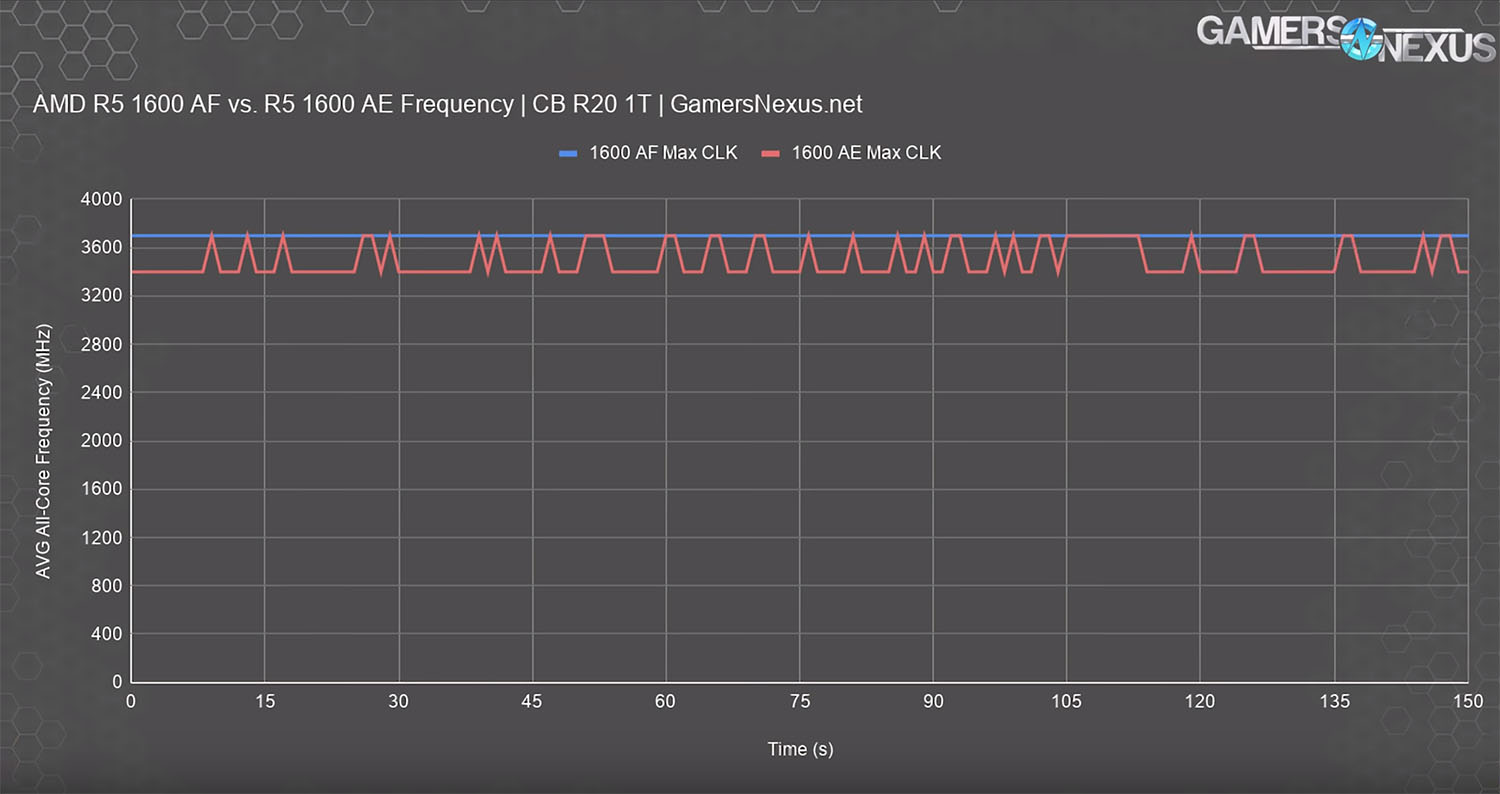 For Cinebench R20 with a single-thread load, we measured the AMD R5 1600 AF’s maximum frequency at 3699MHz, where it held at least one thread constantly for the entire test. This is also when AMD’s advertised boost numbers made more sense. The R5 1600 AE, meanwhile, did about 3399MHz to 3699MHz, bouncing between as the threads were switched for the load. The AF is doing a much better job at holding its frequency, and is actually outperforming the R5 1600’s originally advertised speeds.

Our CPU testing methodology is split into two types of benchmarks: Games and workstation workloads, but every CPU which is sufficiently high-end will go through both sets of tests. We are beginning to spend more effort publicly documenting the exact versions of our tests, hoping that this is helpful to those reading our tests. We are also detailing more explicitly the unit of measurement in text, although our charts typically do this as well. Our workstation benchmarks include the following tests:

All tests are conducted multiple times for parity and then averaged, with outliers closely and manually inspected. The number of times tested depends on the application and its completion time. We use an internal peer review process where one technician runs tests, then the other reviews the results (applying basic logic) to ensure everything looks accurate. Any stand-out results are reported back to the test technician and rerun after investigation. Error margins are also defined in our chart bars to help illustrate the limitations of statistical relevance when analyzing result differences. These are determined by taking thousands of test results per benchmark and determining standard deviation for each individual test and product. Any product that has significant excursions from the mean deviation will be highlighted in its respective review.

Motherboards used are varied based upon platform. Where compatible, we used the following:

Driver version 430.86 is used. Adaptive sync is not used in testing.

MCE is always disabled on test platforms, ensuring that turbo boost durations should be running within specifications set by the CPU manufacturer. We also try to keep an eye out for other motherboard trickery, like MSI’s oft-boosted BCLK, and then reset to stock settings when applicable. XMP is used on the Corsair memory in our test benches. 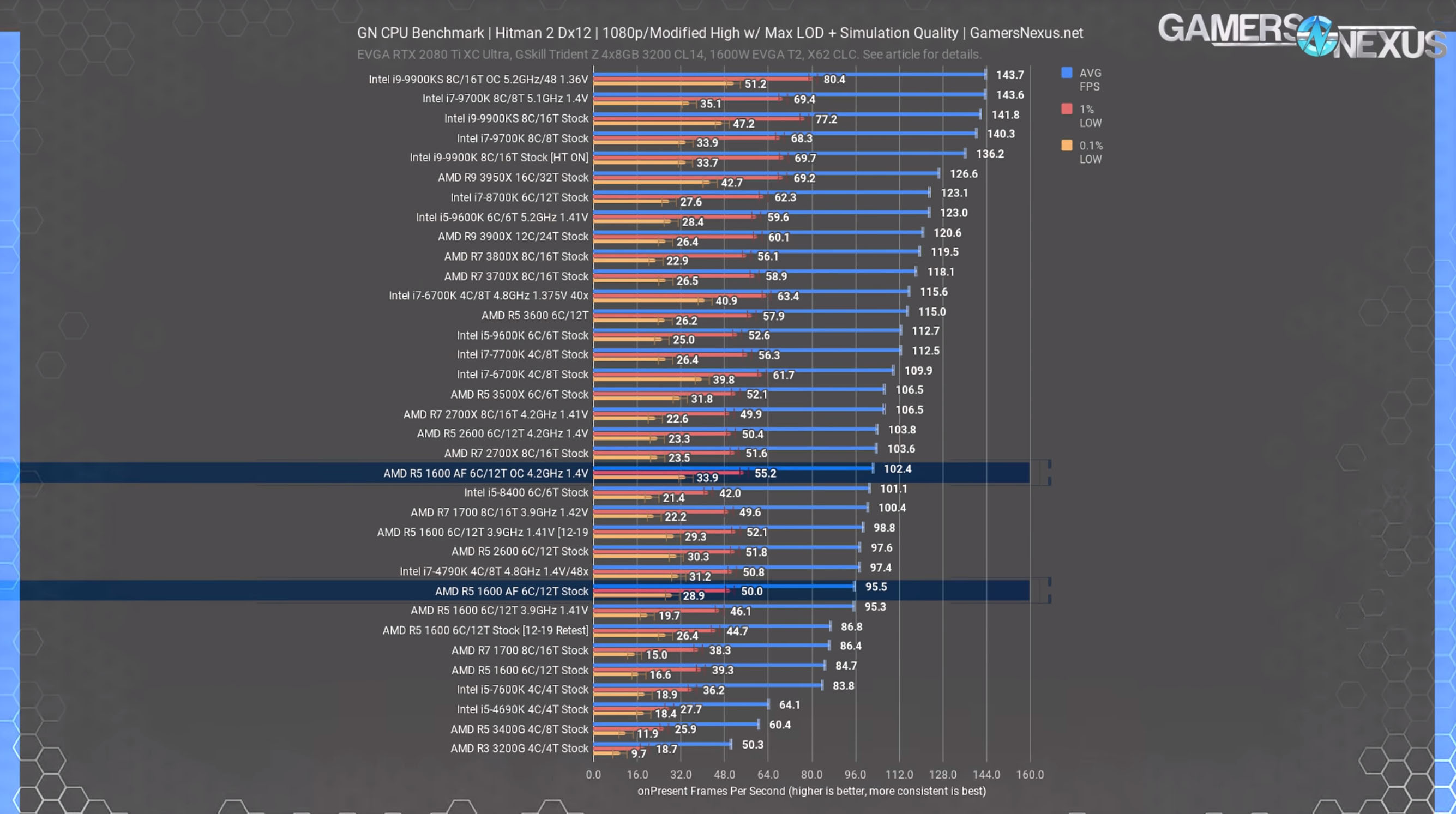 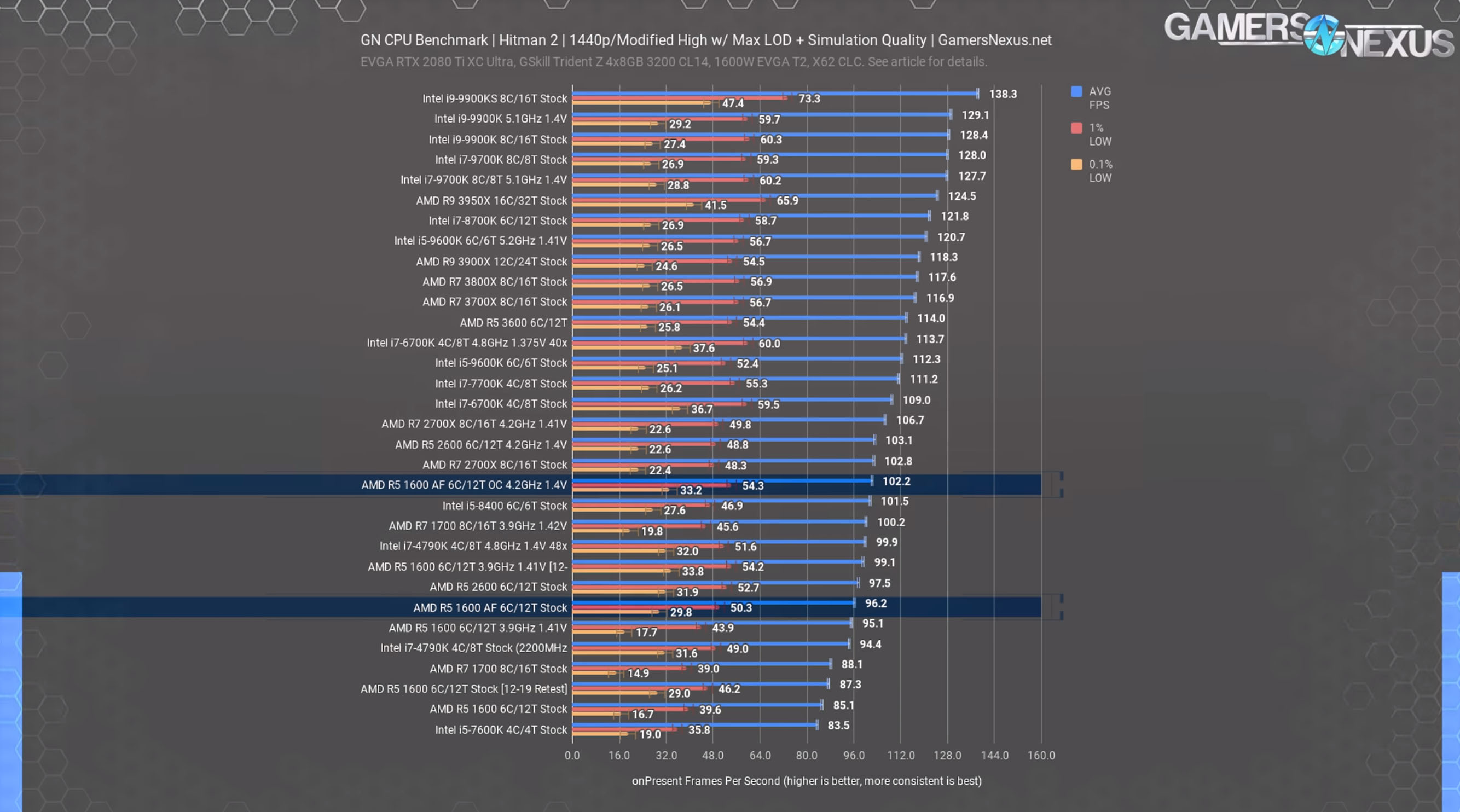 At 1440p, the results are mostly the same. That makes sense, since these CPUs are all low-end enough that we’ve become CPU-bound, and so changing the load on the GPU doesn’t matter. 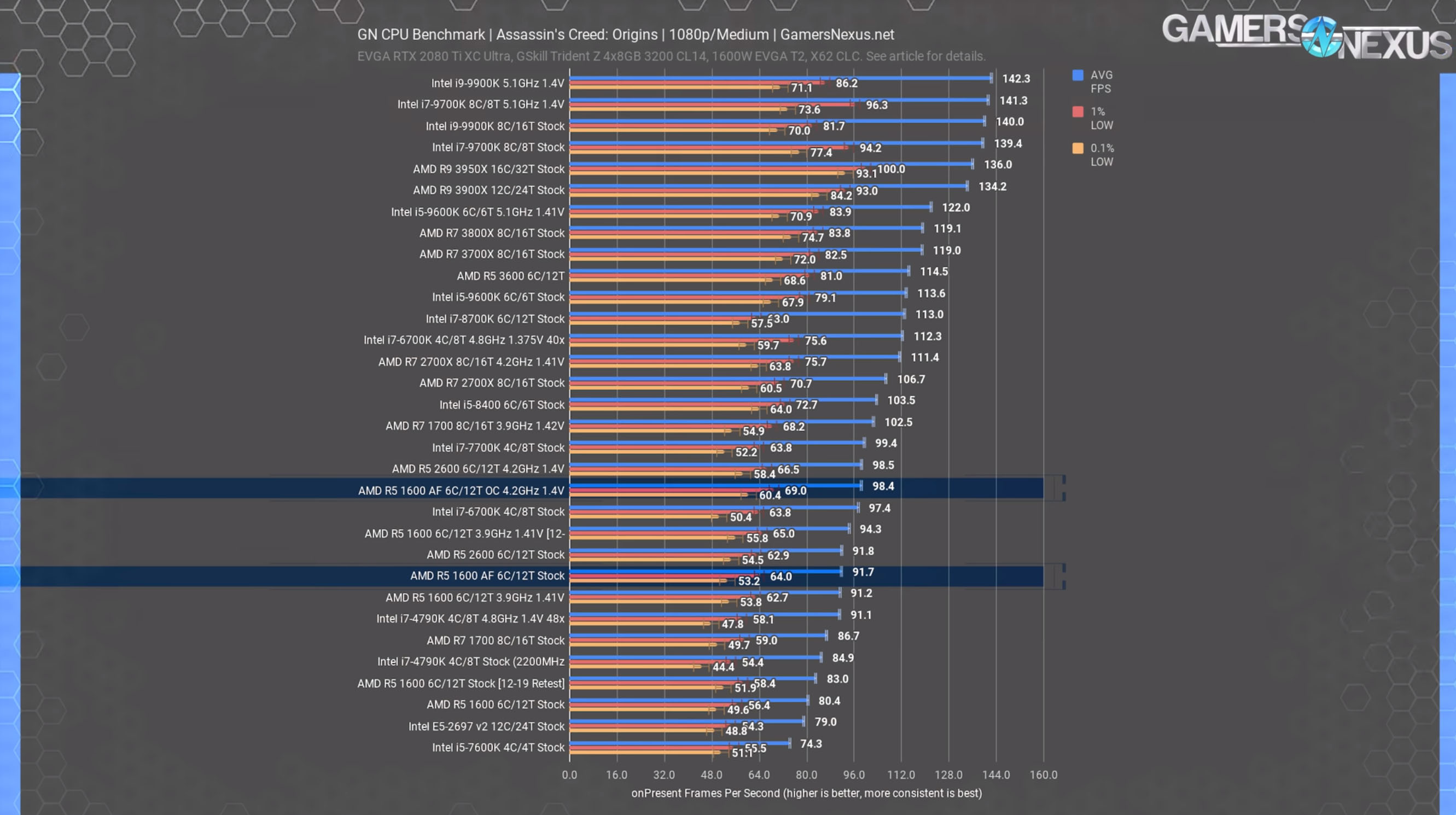 Assassin’s Creed is next, where we often see direct thread impact and benefit for increased thread counts, although frequency still matters. The AMD R5 1600 stock CPU, at initial testing, did about 80FPS AVG. The retest put us to 83FPS AVG, thanks to new BIOS updates and Windows updates, and the R5 1600 AF ran at 92FPS AVG. That’s an increase in average framerate of 10%, with neither meaningful nor noticeable impact to frametime consistency. The R5 1600 AF at 4.2GHz did 98FPS AVG, while the 3.9GHz 1600 got stuck at 94FPS AVG. The delta, improving on the AF, is 4.3%. As for the R5 2600, stock had us at about the performance of the R5 1600 AF stock CPU, while the OC repositioned that to rough equivalence with the R5 1600 AF OC. For $85, once again, performance is strong and worthy of serious consideration. Even though it has a 1 in front of its SKU name, it’s not an old processor. This would be great for a budget gaming PC. As for the much more expensive R5 3600, that one runs at 115FPS AVG in this game, or 25% better than the R5 1600 AF stock CPU. 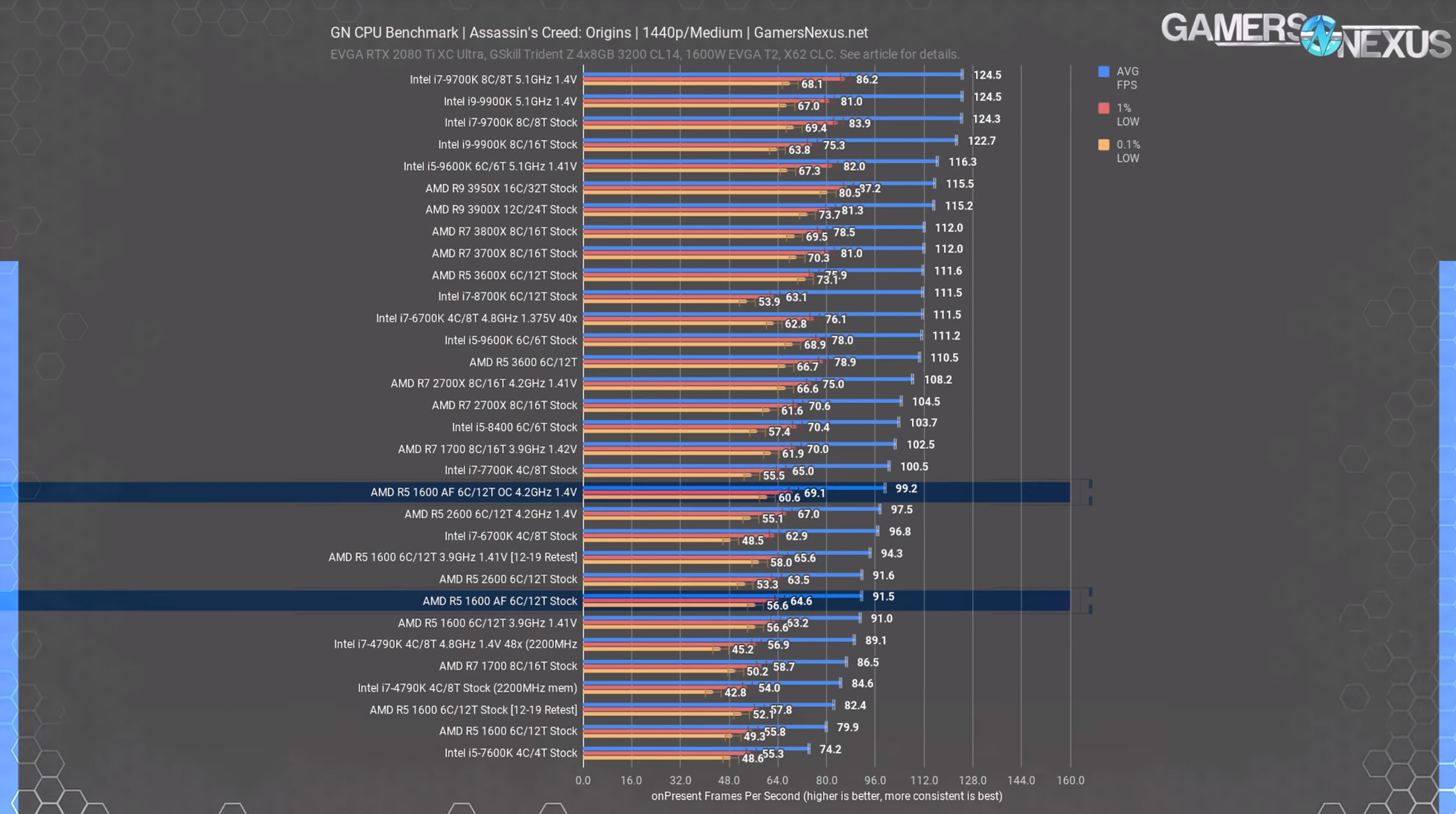 1440p, once again, is predictable. We see no meaningful change here since the benchmark is primarily CPU-limited, not GPU-limited, and so performance is largely unaffected. 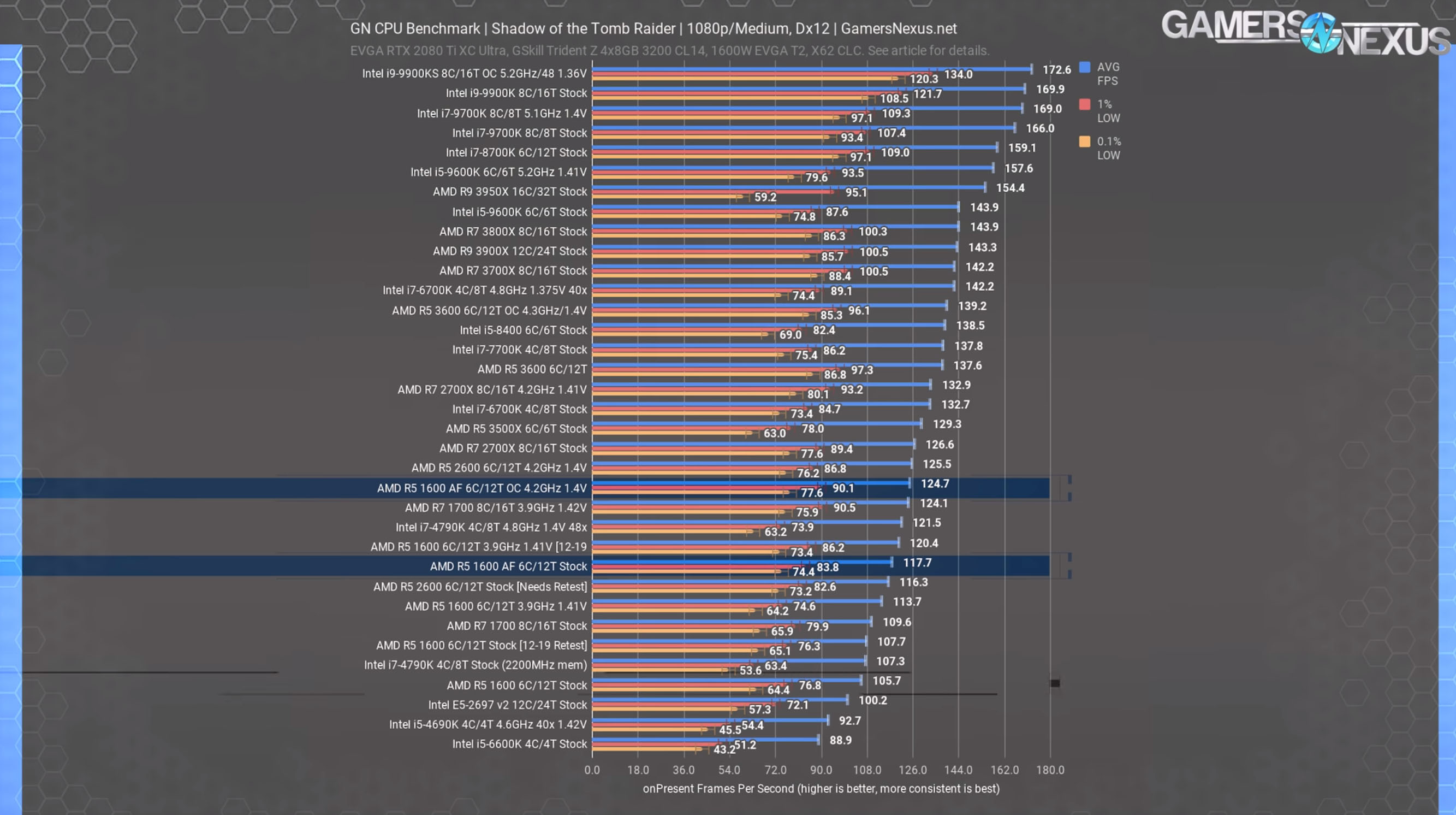 The R5 1600 AF at 4.2GHz scored 125FPS AVG, and for comparison, the AMD R5 2600 stock CPU scored about 116FPS AVG in our original testing from July, although later BIOS releases could have bumped that up marginally. The 4.2GHz R5 2600 OC placed at 126FPS AVG, putting it about equal to the R5 1600 AF OC results and within test variance. That puts the R5 1600 AF as approximately equivalent to an R5 2600 in this title. The 2600’s higher base and boost would likely put them at equivalence if retested. 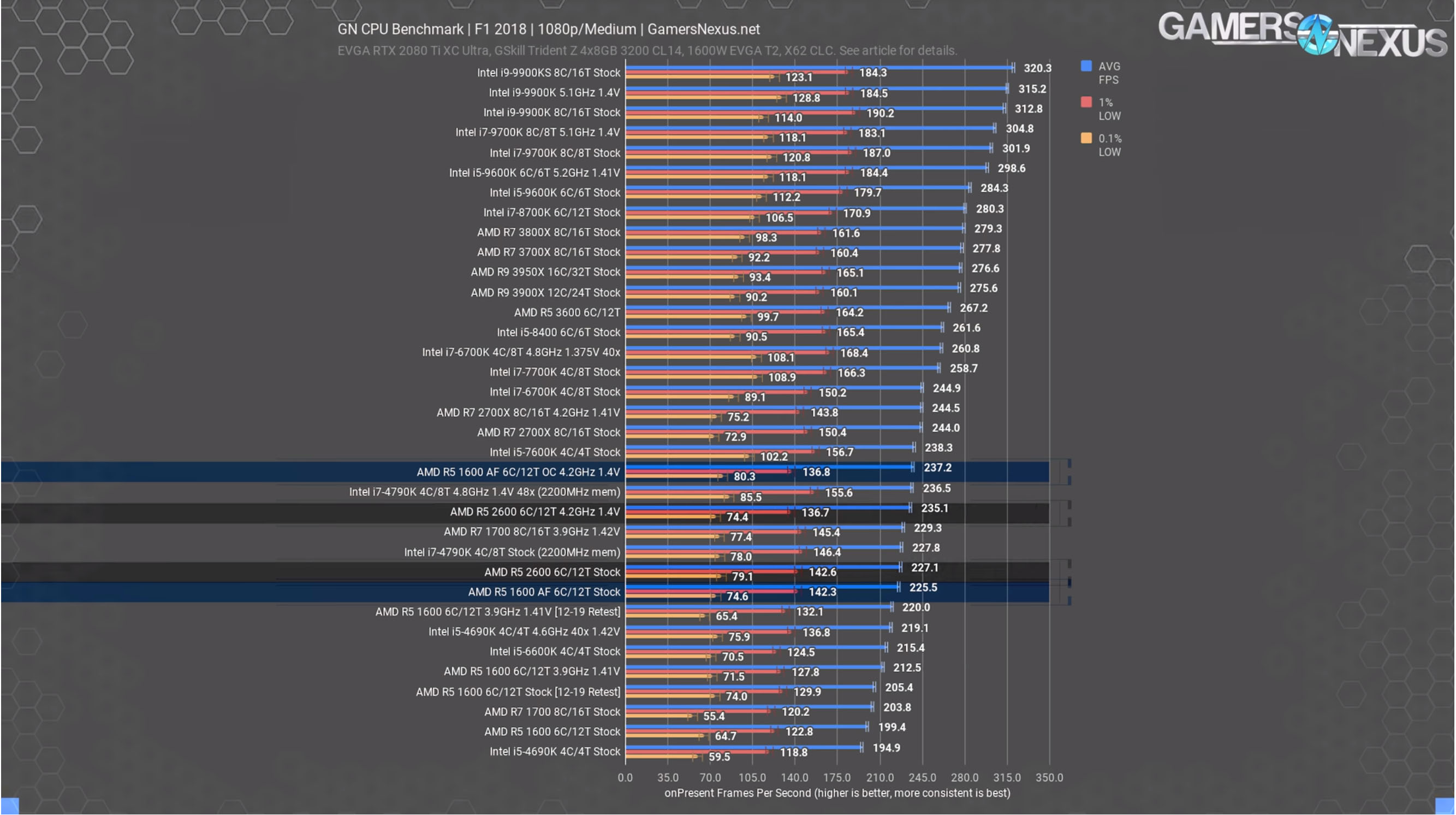 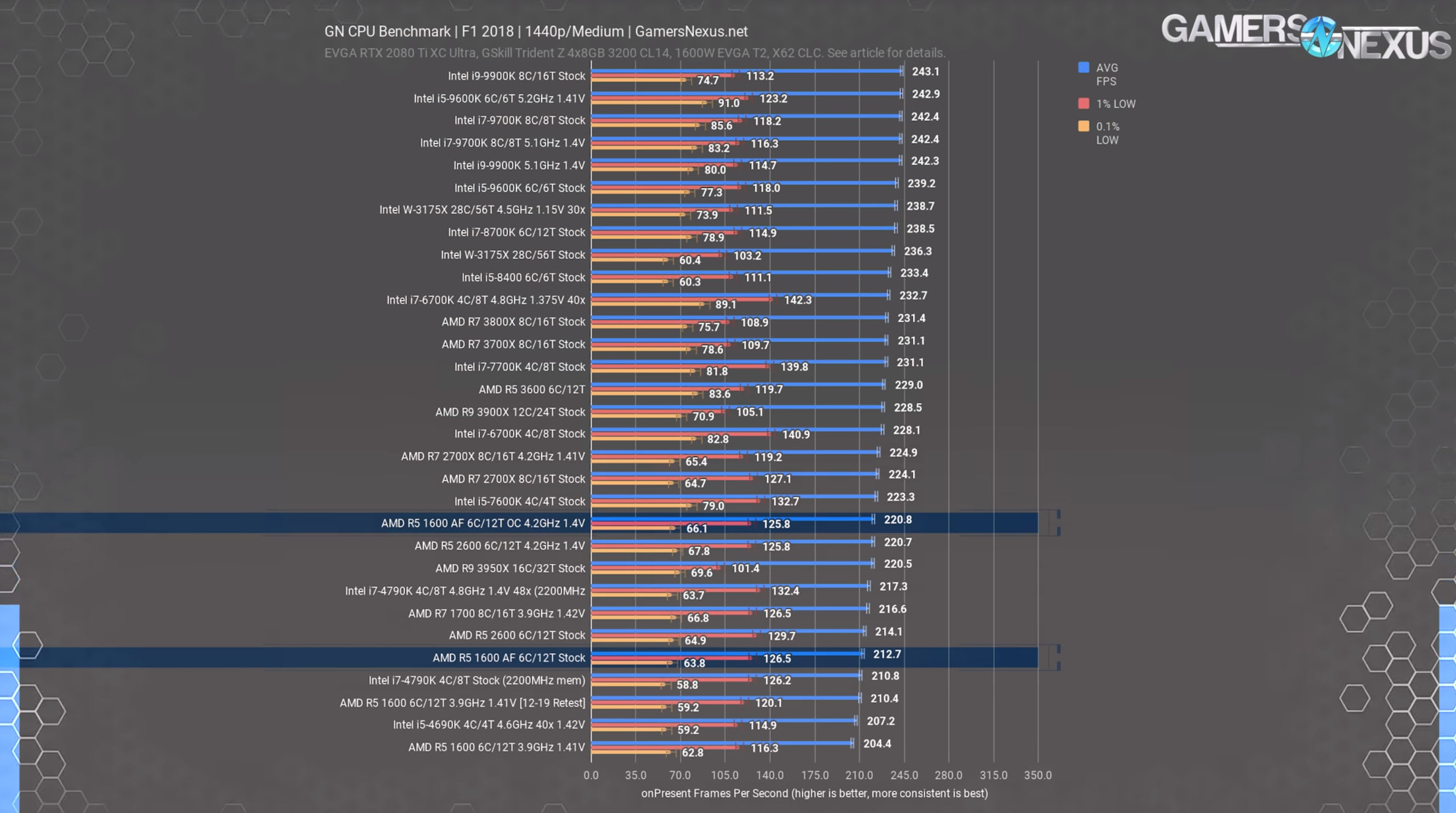 F1 at 1440p does have the results chopped a bit, mostly from the spikes that do shoot higher on the GPU in the benchmark. The R5 1600 AF ends up at 213FPS AVG and 221FPS AVG for the OC 4.2GHz result. The top gets chopped off these results, but the scaling is similar. 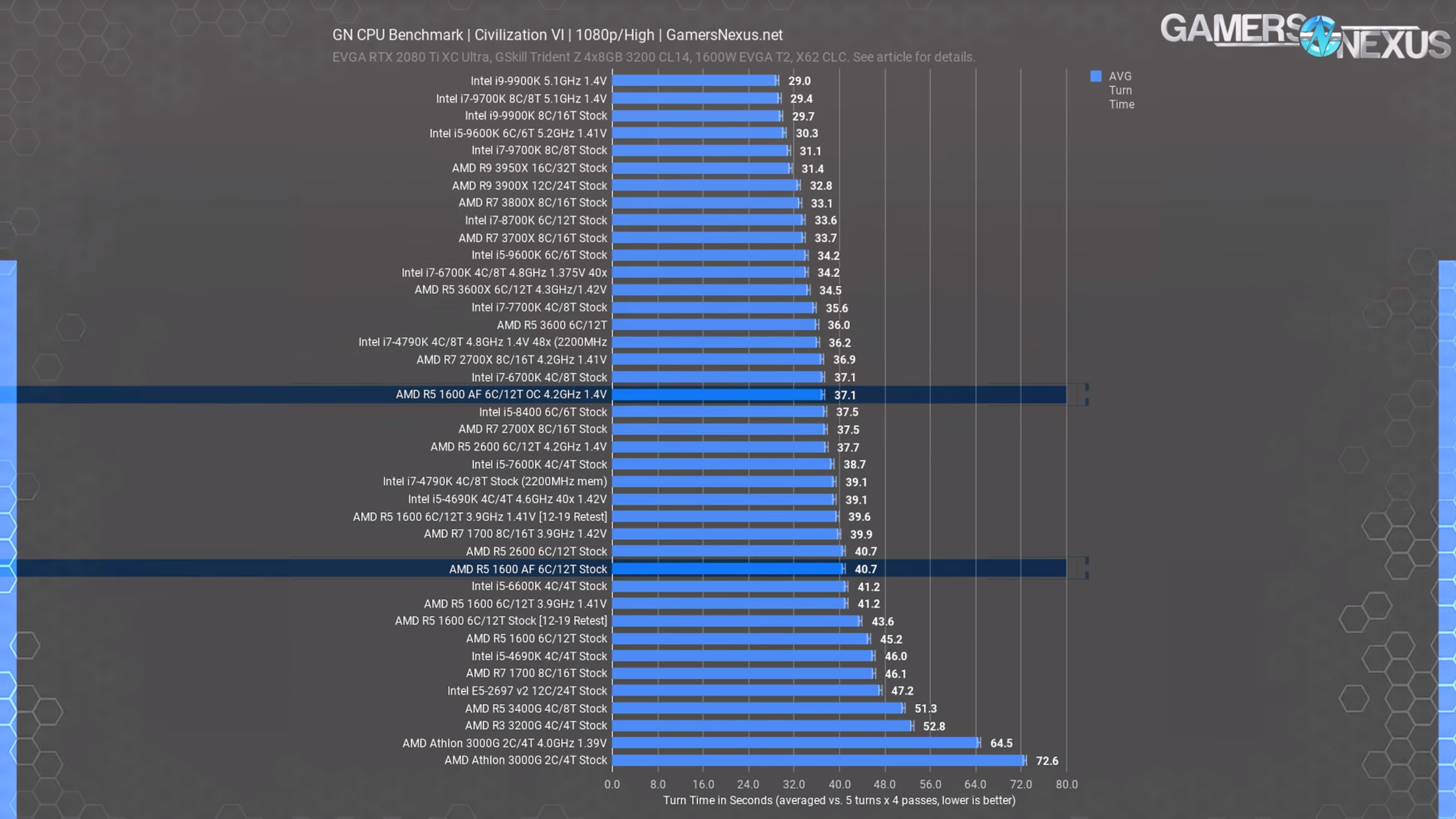 Civilization VI is a turn time benchmark based in seconds rather than frames, allowing us to see AI simulation processing time. The AMD R5 1600 AF stock CPU required 40.7 seconds to complete each of the AI player turns, on average, with the overclock to 4.2GHz reducing that requirement ot 37.1 seconds (or an 8.8% reduction). The AMD R5 1600 stock CPU, after retesting, required about 43.6 seconds to process each turn. The R5 1600 AF ends up about 6.7% faster than the R5 1600 AE retest, or about equivalent to the AMD R5 2600 stock CPU. 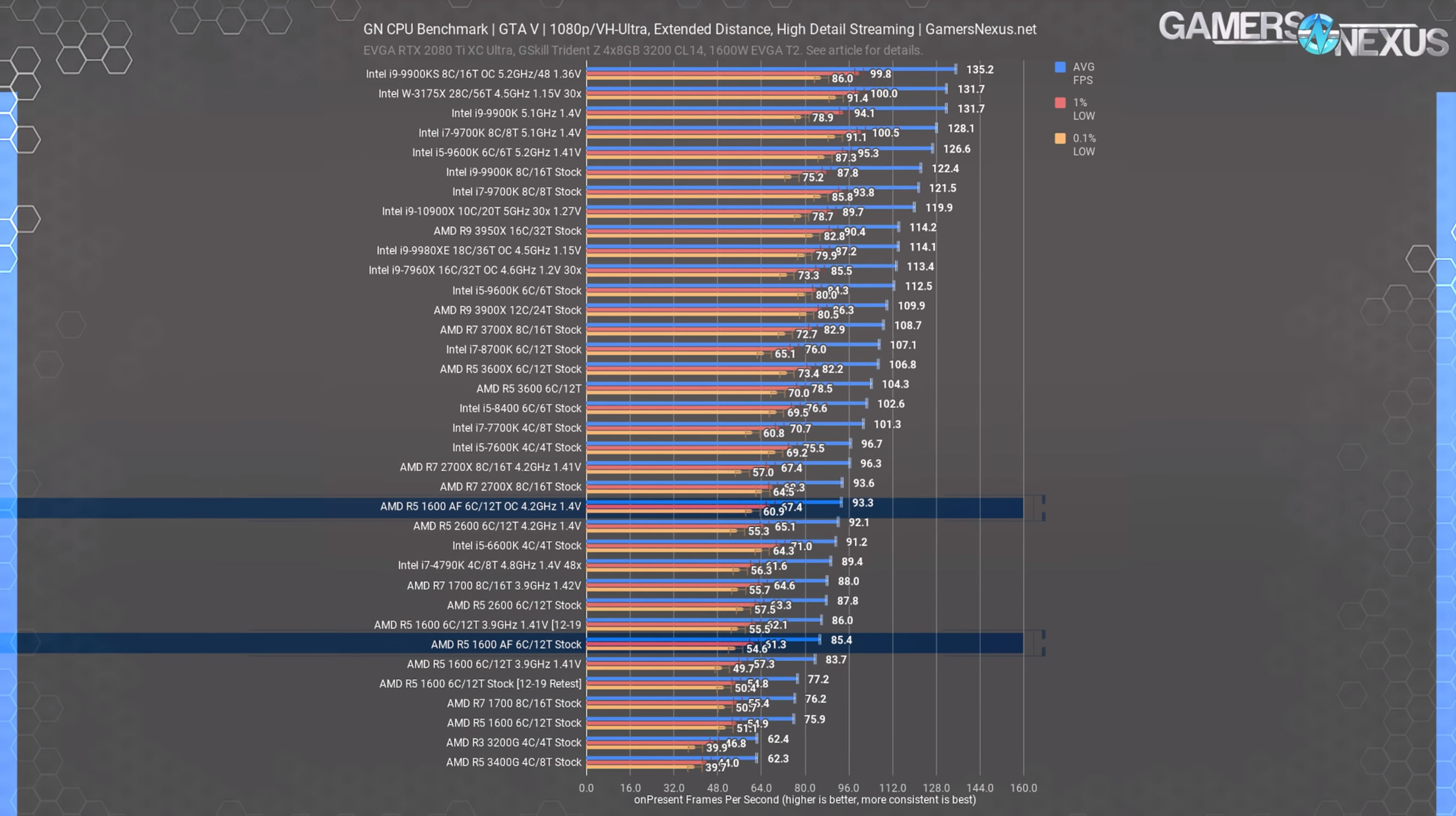 GTA V is the oldest game on our bench, but is fun for its reduced reliance on cores -- it’s more of a look at how the older games were built, and given the fact that it’s still constantly a top-10 game on Steam, it’s worth a look. The AMD R5 1600 AF scored 85FPS AVG stock, or about 93FPS AVG with the 4.2GHz overclock. The AMD R5 1600 AE retest had it at 77FPS AVG, about the same as the original test from a few months ago, and the overclock put it at 86FPS AVG. OC-vs-OC, the improvement in the 1600 AF is about still about 8.5% from AE to AF when overclocked. The R5 2600 ran at around 86FPS AVG, putting it about equal to or slightly better than the 1600 AF. 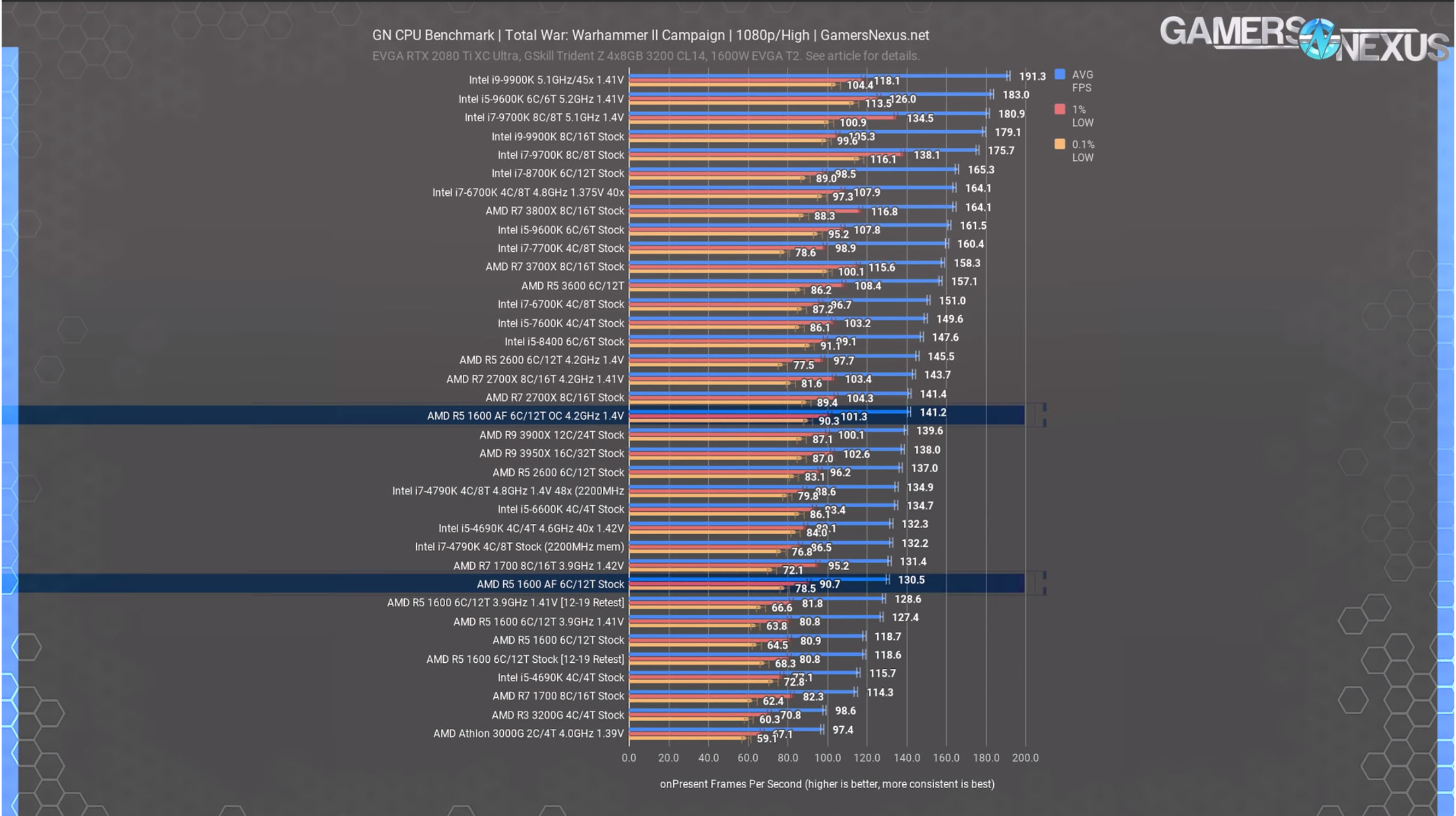 Total War: Warhammer II’s Campaign benchmark is another CPU-heavy test scenario, and this one positioned the AMD R5 1600 AF at 131FPS AVG stock, 141FPS AVG overclocked with improvement to lows, and improved over the AMD R5 1600 retest’s 119FPS AVG by about 10% stock-to-stock. The results didn’t change versus our earlier set of tests for these CPUs. The AMD R5 2600 stock CPU ran at about 137FPS AVG, or 146FPS AVG when overclocked. That puts it better than the AMD R5 1600 AF, stock-to-stock, by about 5%. Overclocking isn’t much different. 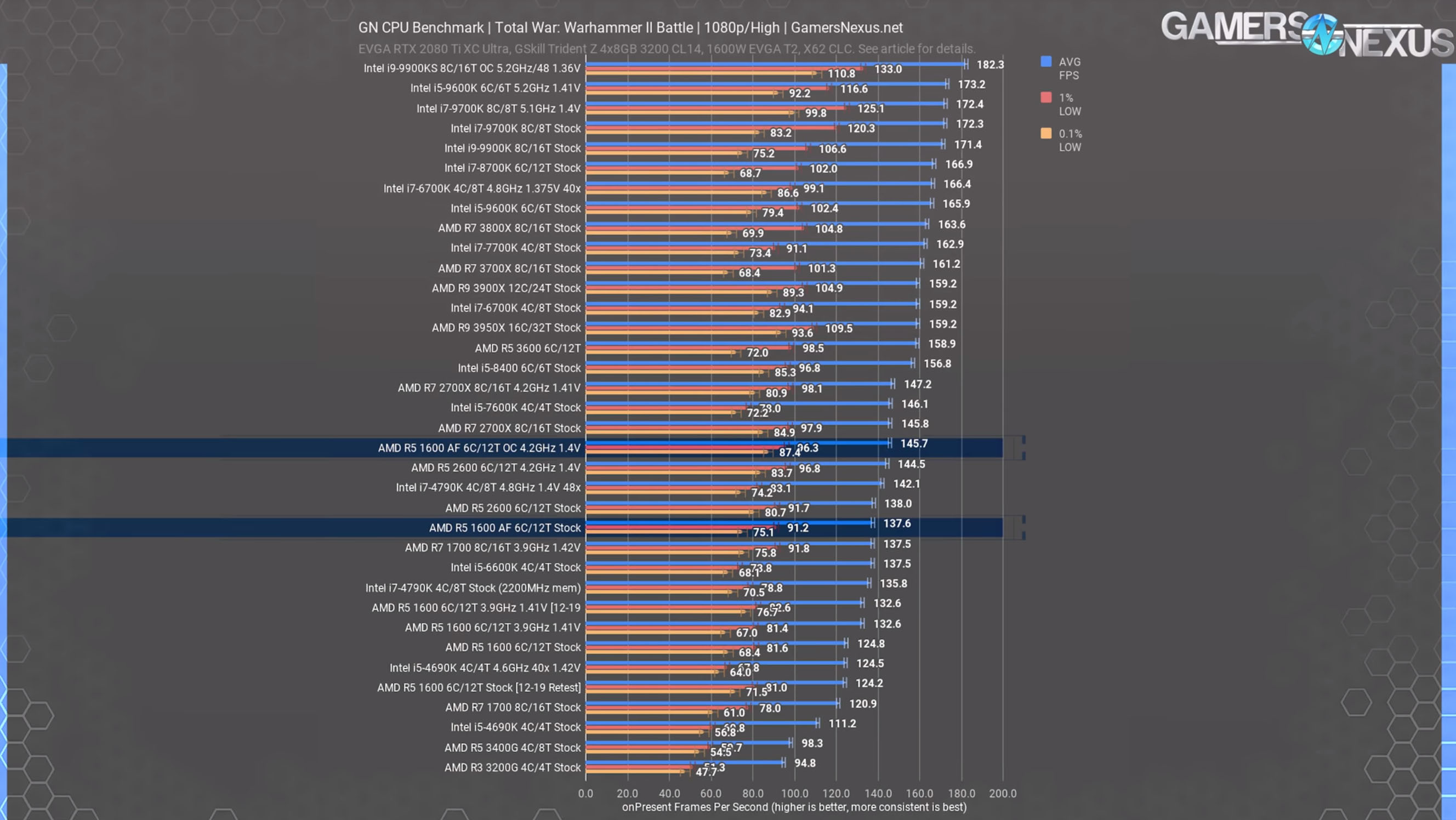