Our previous two HTPC build guides (a $475 option and $825 option) utilized Silverstone SUG-series, shuttle-styled cases. These cases are fantastic, but a bit pricey; in an exercise of price-slashing, we assembled a ~$300 HTPC with cheap-but-effective components. This worked out well, and as a result, we'll be posting several HTPC articles over the next month or two (based upon two different builds we did).

A video review accompnies this written review - see below for the embedded video.

This review will focus directly on the case of the cheap HTPC build. Cases are, for some reason, exceedingly difficult for me to choose; I've always debated heavily over case choice. This is, in part, because I'm a proponent of system style and like my computers to have an overarching theme. The theme of this system, though, was dirt cheap. APEX offers their DM-387 minimalistic case for somewhere in the range of $45 (it was on sale for $35 when we picked it up), so it fit the bill; it ships with a 275W PSU, even further accommodating the self-imposed price limitations.

Further inspection of the case's Newegg page revealed that it has marvelously mediocre user reviews, making it even further qualified for usage in this affordable system.

You may have noticed a few things in these specs: First of all, it uses an 80mm fan -- we've mentioned before that these have a history of being quite loud, which is clearly sub-optimal for a "living room" PC or HTPC. With that said, it's rare for an HTPC case to include fans larger than 80mm, so this is nothing that should be off-putting. I did, however, suspect that the fan would scream (a result of the case being so cheap). For this reason, I ordered an additional fan at a low CFM for an extra $8. It was worth it, as you'll read in a moment.

Additionally, the case is missing proper SSD mounting locations and does not provide brackets to adapt to the larger bays, so our SSD did not fit without some trickery. A few zip-ties and some stick-on Velcro later, we had a mounted SSD.

As-is, the specs are, well, what you'd expect for the price. A 275W PSU, compatibility for Micro-ATX and Flex ATX form factors, a few drive bays, and some USB ports. The Newegg specs claim that this case is "thermally-optimized," and while they don't go through any lengths to explain what that actually means, from my own examination, there's nothing that is thermally stellar about the design. It's steel all the way around, some holes strategically placed above the CPU exhaust and (obviously) the 80mm fan exhaust, and that's about it. It's very straight-forward.

The system is a bit more flexible in its positioning options: It ships with standing brackets that will allow it to either stand straight-up (desktop style) or lie flat, more like a DVR would be. This is all good, though the case is a bit deep, making it impossible for some shelves to accommodate its depth.

APEX's most notable addition to this case is likely its removable drive tray. The tray is mounted toward the front of the case (of course, since that's where the optical drives need to be) and is hinged on a few pivotal screws. These pivot points allow the bay to be vertically positioned for drive installation, removed, or otherwise manipulated in ways that make installation easier.

This category is fairly non-existent for a case of the DM-387's caliber, but it's still worth filling in.

Performance is what you'd expect: It works. You put parts in, screw them down, and turn it on. The cooling functionality is more than enough for the E-350 APU installed in our test version, even when strained by benchmarks. I wouldn't push it too hard (say, for instance, with an overclocked i-series CPU), but it should be enough cooling for most uses. 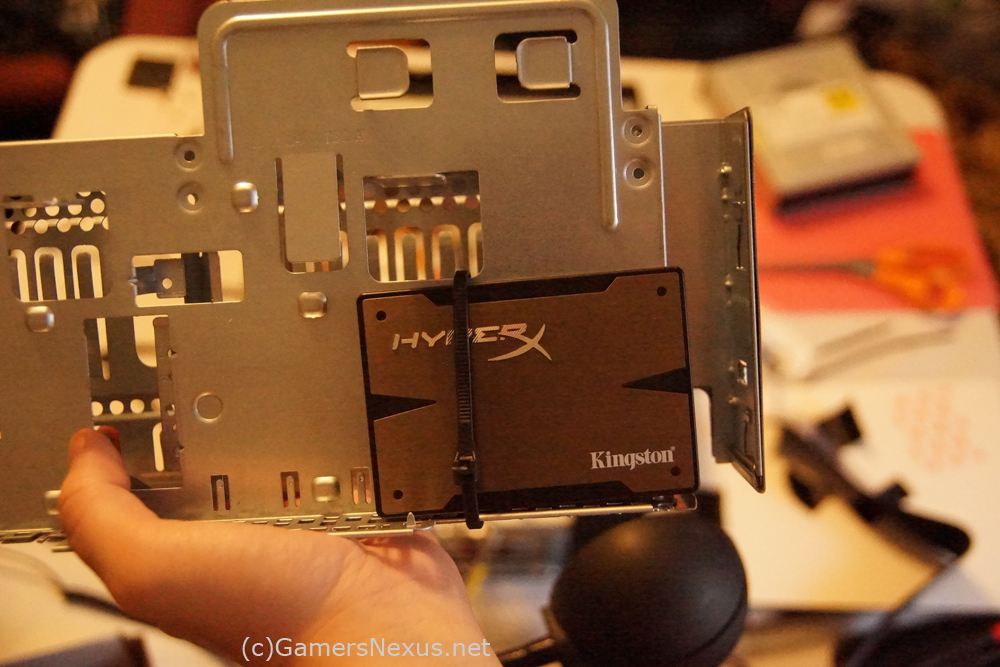 Makeshift SSD bay -- yes, the SSD is, in fact, worth the same as the rest of the system.

The removable drive tray (as discussed above) makes it a bit easier to clean dust out of, but with no filtration system, that's about the best cleaning potential you'll get. HTPCs will often find themselves on the floor (or on a shelf), as this system is a bit wider, I'd suspect it'll be on the floor more often than not. For this reason, it's reasonable to expect a fair amount of infiltration from dust. Keep in mind that if you were to purchase this case, it may be advantageous to check its dust levels more frequently than is typical.

On the cable management front, I'll be brief: There is none. Luckily, since this will be used for lightweight systems, that is largely irrelevant. Unused cables can be shoved under the drive tray, but aside from that, there isn't much in the way of clutter due to the minimalistic nature of a budget HTPC.

Here's where we get to the more tangible conclusions and review opinions.

APEX's DM-387 has average build quality. It's nothing spectacular, but the steel chassis and interior layout is functional and simple.

Aesthetically, the case is discrete and resembles a DVR that your local ISP may provide. It's abnormally deep, and since it'll be heavier than any gaming consoles or other boxes you have, that means the case will likely find itself on the bottom of stacks. Be careful if stacking other devices on this, though, since the best exhaust outlet for the CPU cooler is immediately above the CPU. The case's front panel is plastic-y and feels cheap, but held up against standard use.

On the quality of the build, the included 80mm fan is quite loud and unusable: This is largely due to its nature as a high-CFM 80mm fan, but the noise emitted is amplified by the fan cage that contains the fan (which tends to vibrate a bit at high RPMs, sometimes producing a rattling noise). 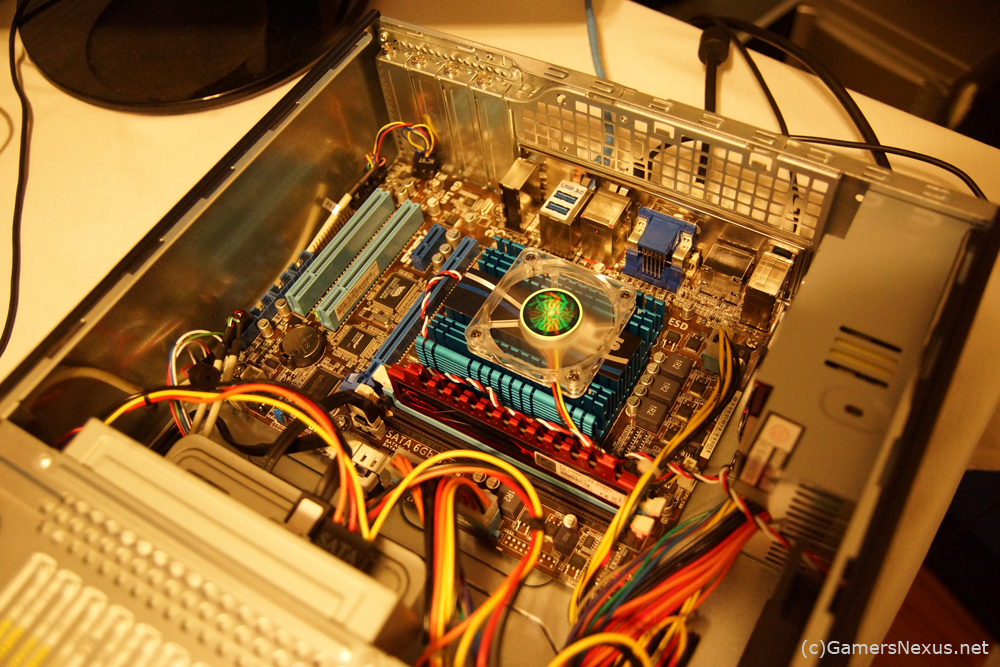 Replacing the fan with a lower-CFM option should remedy this issue for most users.

On a similar note of quality, the PSU is of questionable reliability, and although our testing hasn't successfully lured out a failure, I'm not holding my breath. It's a cheap 275W PSU, so there's not much to expect on that front. It does lack an on/off button on the back, though, which makes construction a bit more annoying.

"Average" seems to be the word of the day. Nothing here is overly-exciting (the Switch 810 really spoiled us), but nothing's so bad that you should be running away. The lack of an SSD cage is detrimental, to be sure, but it can be worked around and bay adapters can be purchased. With that said, though, as soon as you find yourself purchasing things to adapt a case (SSD cages, slower fans, etc.), you'll slowly creep up in the price and get closer to the range of other, higher-quality cases. Keep an eye on spending -- as soon as the combined total of adaptations and the base case exceed that of a better option (like the Silverstone SUG series), it's probably best to go for those other options instead.

APEX's DM-387 does what it wants to do: It allows for a micro-ATX system to be built, powers it with its 275W PSU, and then stays out of the way. That's about it, for this one. Simple. Stick it in a corner and forget about it for a while -- but not too long, because you'll need to check those grills for dust with some level of regularity.