A recent surge in fascination with integrated graphics processing technology may prove to be healthy for the hardware industry; as AMD (through Trinity) and Intel (through HD X000 IGPs) battle it out, these tiny systems have never been a more viable option for living room PC gamers. Aside from making excellent living room PCs and DIY / home-made consoles, the smaller builds we've worked with tend to be quiet and LAN party-friendly, which is great for the lite gamer who wants a discrete box.

In the coming weeks, we'll cover a wide range of HTPC topics (including video guides on how you can make the most of yours), with the goal of proving the viability of HTPCs as gaming platforms. But in preparation for those posts, we're kicking it all off with this: A review of SilverStone's SGUO SG08 HTPC case, which we'll be using for the ensuing articles. You'll find the video review below.

As the SUGO 08 is a small box, it's only able to accommodate mini-ITX and DTX motherboards -- there's simply no room for anything larger. Half of the case is dedicated to the PSU (which is standard ATX form factor), a small corner is reserved for large video cards, and the remainder is for the motherboard. That said, SilverStone's SG08 case is a bit unique for a few reasons: The most notable of these is support for large video cards -- up to 12.2 inches in length -- meaning you can fit most current-gen cards in the box. Additionally, the PSU included in the case has truncated cables, thus reducing the difficulty of concealing cables. The PSU is not modular, but if you wanted to add one of your own, you certainly could -- just keep cable length in mind.

The SG08 also ships with two dust filters: One for the GPU and one for the primary, top-mounted fan. The add-on filter can be situated between the GPU and the sidepanel of the case, making for better dust management.

This is particularly important in HTPCs -- especially so in systems that are the medium-ish size of the SG08 -- as many of them end up close to floors and in tight places, where dust accumulates. Not to mention, the heat output attracts cats... any fan's natural predator. All the more reason for that dust/hair filter.

The first thing you'll notice is the case's high price: At nearly $200, the case certainly stands out as more than just a cheap home-theater movie box. You're paying for quality, so if your objective is to construct a $500 HTPC, we'd advise you to instead check out this $475 HTPC build (which includes a cheaper variant of the SG08). If your plan is to use this system regularly as a more intense rig (or if you have extra money for such toys), then the SG08 may be worth further investigation. 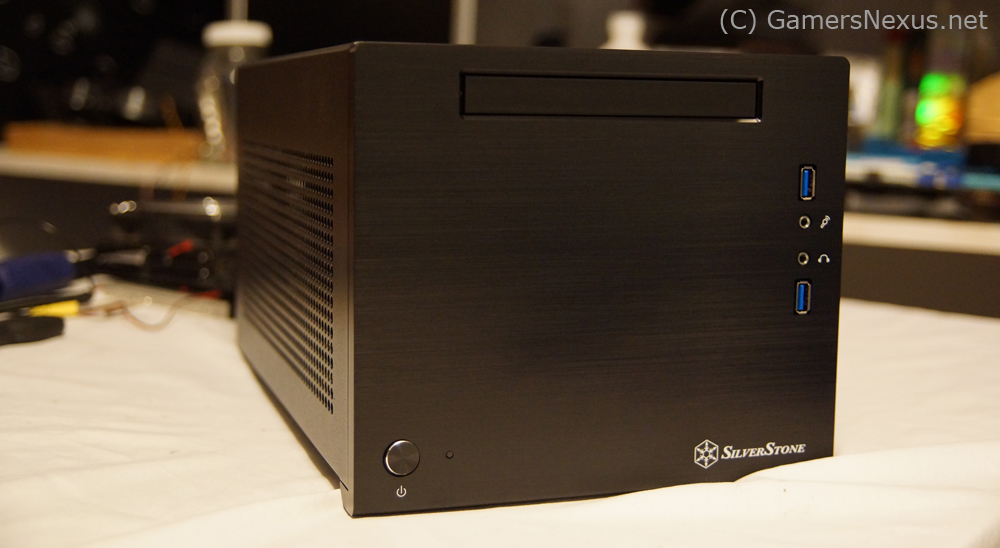 Let's look at the other noteworthy features:

I'd like to expand on the drive cage mentioned in the above list: SilverStone has a neatly-packed drive cage, which -- through some incredible feat of engineering -- can fit a regular HDD (topside) and two SSDs (underside), all in one tiny compartment. Spatially, this is excellent, but does result in some issues: Because the SSDs face the sidepanel - and because the sidepanel is so close - we had to use 90 degree SATA cables (right angle heads) to properly connect the drives. Other cables simply didn't fit when the lid was put back in place - and if they did fit, they didn't stay for long.

Now, if you hadn't noticed in the specs, part of the $200 pays for a 600W 80+ Bronze certified PSU, so that definitely helps justify the cost. PSUs of this caliber can easily run you up another $60, but whether or not the full price is "worth it" will be partially your choice (as you'll find out as you read on).

There are a lot of other, less noticeable features and caveats to the SG08, so I'll leave you all to this video overview for that:

System assembly isn't too terribly complex. After spending five minutes unscrewing a few modular parts, you unveil the insides (which have standoffs pre-installed) and can get to work. Everything is screwed in, so keep the screwdriver handy. To get to the motherboard, you'll have to follow these steps:

Sure, it's a bit more work than a traditional case, but it's also a much smaller case and needs tighter engineering. However, I don't think it would have killed anyone to add a few thumb screws or some sort of tool-less design. It's not like spinning a screwdriver is hard, of course, but if you were to pay $200 for a case/PSU combo, I'd imagine you get some leeway to complain about the small stuff.

SilverStone's case actually performed admirably in our cooling tests. When pitted against other (less expensive) mini-ITX and MicroATX cases, the SG08 consistently ran a few degrees cooler despite being equipped with similar hardware. The difference was not so great that it should act as the deal-breaker between cases (often ranging 3-5 degrees Celsius cooler than, say, BitFenix's Prodigy or Lian Li's TU200, though on par with Thermaltake's ARMOR series HTPC), but it is another tick in the SG08's favor.

The cooling is easily one of the best features of the case, though, and while the temperature differences may not sound like much, the overall efficiency is fantastic. Using only one relatively-massive case fan - a full 180mm fan (700RPM or 1200RPM, running at 18dBA or 34dBA, respectively) - the system keeps a respectable temperature and can remain consistently low-noise. Larger fans, as we've discussed before, lend themselves to being quieter -- the concept is simple: It's a bigger hole and can push more air through that hole, so can run at a lower RPM to match and still match the CFM of smaller fans. 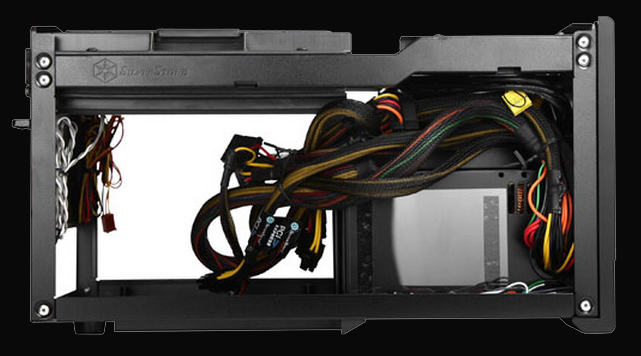 As might be expected on such a small case, cable management is effectively non-existent. Really, that's not necessarily surprising. I did find a few places where tether-loops could have been installed, and I think that would have been a large improvement. The SG08 has (maybe) one or two spots where it is easy to tether cables, but beyond that, you'll have to creatively shove things in holes or bear the ugliness of exposed cabling.

Luckily, shorter cables (from the included PSU) make this less of a concern. Again, it is non-modular, so if you're not using the 2xPCI-e cables, well, you're stuck with 'em anyway.

This is where the SUGO SG08 really shines. As we've come to expect from SilverStone, the case's exterior and interior are both masterfully crafted; the front panel is a 10mm thick sheet of brushed aluminum (which looks fantastic), the interior has a few crossbars and some carefully stacked bays (drive cage, optical cage), and all the little features really add up to make this case what it is. Even the rubberized screw holes on the drive cage are a nice thought, providing some dampening for louder magnetic drives.

I have no complaints at all about the quality. The buttons feel snappy, the brushed aluminum flows well, the grills are discrete and effectively placed, and it's all very solid feeling. It's tricky to convey material feeling through words -- and I hate to make such an off-canter comparison -- but it's sort of like what a very fancy set of cooking ware would feel like. If you've ever encountered anodized or brushed aluminum, you'll know why I like the materials on the SG08.

So at the end of the day, what is it you're really getting? I hate continually calling this an "HTPC case," because it's more than that, but there's really not a better term I can think of. It's a hybrid-mix between HTPC cases and gaming cases. The SUGO SG08 provides an option for those who want something small and concealable; the user who doesn't want a flashy, three-foot tall rig will appreciate the SG08. It performs well in an HTPC environment as a result of its size, but it can be used in so many more applications than that. 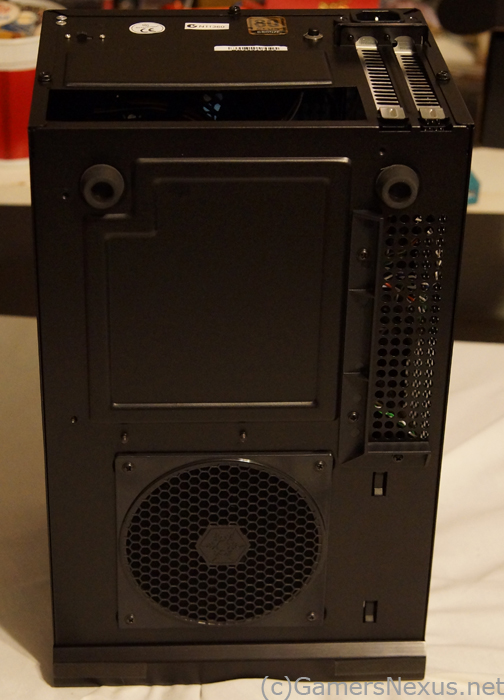 All the tiny features - like the fan speed switch, the brushed finish, the rubberized screw grommets, the shortened PSU cables, dust filters, and full GPU support add up to create a solid and reliable case. The price is very high, though, and while we can't judge its fairness without knowing the cost (which, of course, we don't know), it doesn't seem unreasonable to ask $180-$200 for the equipment you get. Now, whether or not the value (our measurement of expense-to-performance) is balanced is a different question.

Here's where it all comes together: If you don't care for something small - if you can live with a box that's, say, twice as tall (like the NZXT Vulcan), well, maybe consider that instead. If you need or strongly desire something that is small but can still accommodate a full rig, this is an awesome choice! If you need something small that doesn't need to fit a full video card, you can safely downsize (if, for example, you're making use of Trinity or Intel's IGP).

As for what I think... I'd give value a higher grade if the entire thing were priced at around $160. That's what I'd expect to pay for a case of similar value plus a mid-range 600W, non-modular PSU.

It's close. If you're having trouble making the decision on your own, post in the comments below or on our hardware forums for help! We'll work with you on your specific situation.