NZXT's cases have secured a reputation for their knifelike designs: the cases are sharp and emit an almost preternatural aura, using jagged, cutting elements in unique combination with rounded and beveled-out features. And in that fashion, they're almost very Alienware-like in aesthetic -- astral and radiant.

The company's offerings range from dirt cheap to otherworldly, with build quality scaling immoderately within that spectrum. We had the chance to review the crème-de-la-crème of NZXT's cases recently (including a video review, below): The behemoth Phantom 820, currently marketed at $250 for high-end or enthusiast system builders.

That's a lot of features. Some of these options you may have never heard of before -- like the HUE lighting system -- so let's dive into each of these and break-down whether or not they are relevant to your uses. 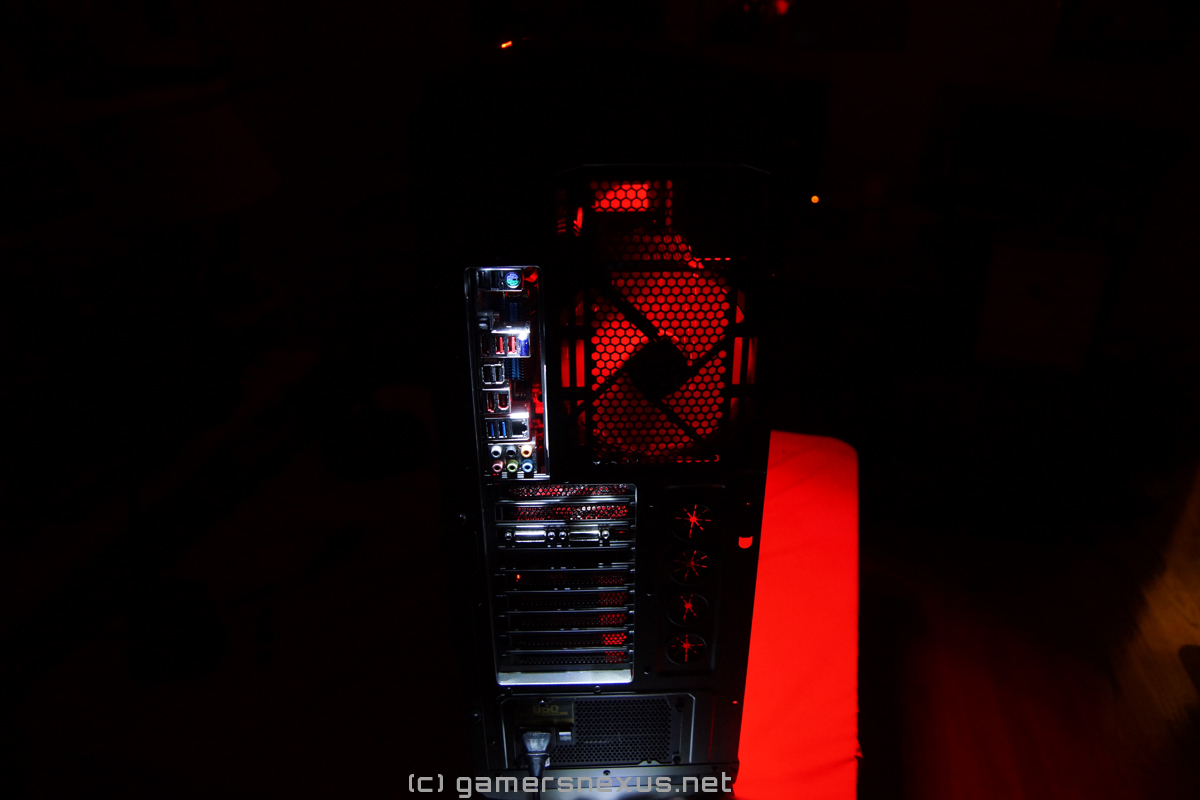 The backlit IO panel can be toggled via front-panel buttons.

The HUE system that is integrated with the Phantom 820 is sort of a HUE-lite. It's not exactly the same as the full HUE package that is offered, but more than enough to offer fantastic spotlighting capabilities where they count. An LED strip lines the top-left wall of the case (the ceiling, as it were), where it casts light down upon the acrylic side panel and then is accentuated by the angles in the acrylic. Most notably, the HUE system is capable of producing almost any color you'd care to create, as it has dozens of vibrance & depth levels for each major color. I attempted to count the individual colors offered and came up with somewhere in the range of 70-or-so variations (some of the differences are minor, so I may be off by +/- 15 colors). Regardless, it's quite a lot of color options. 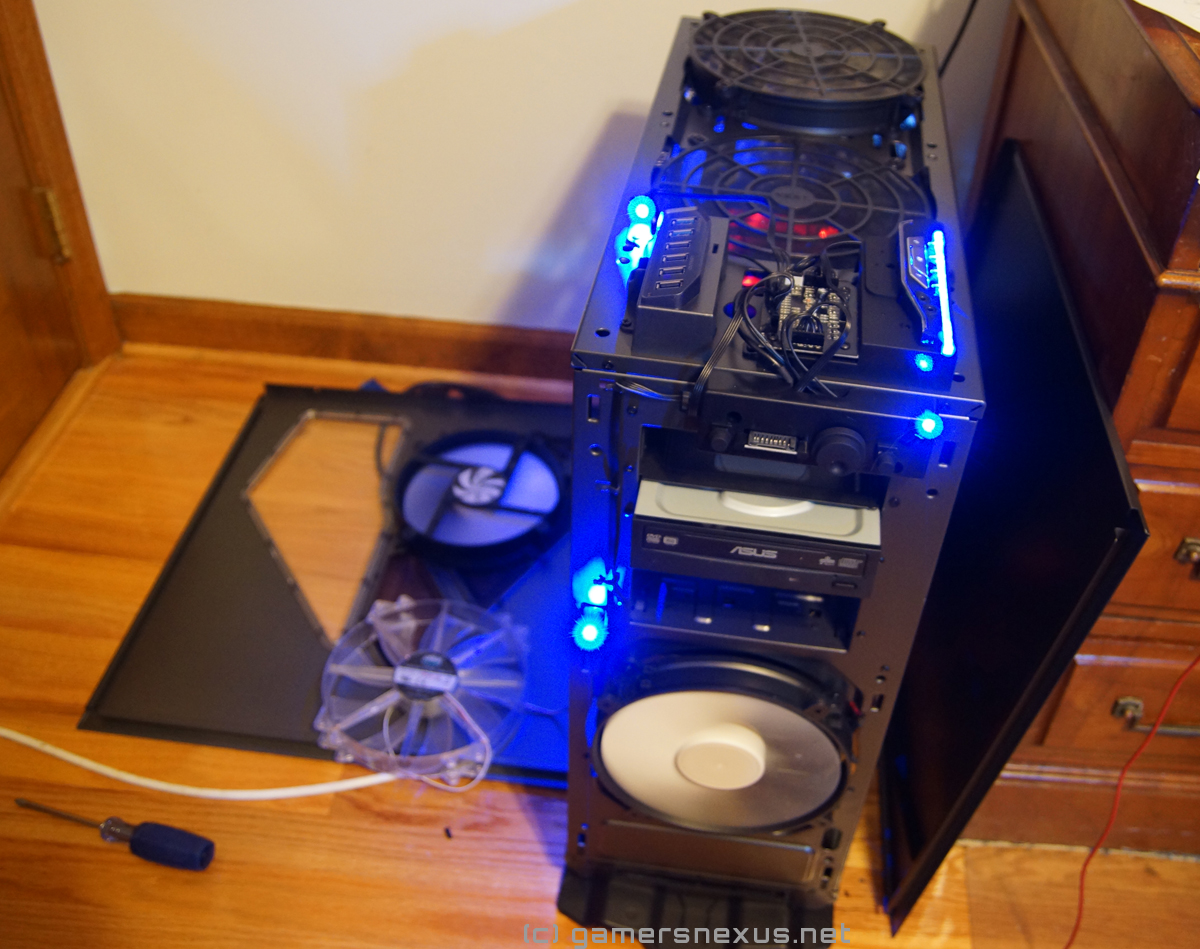 The shell, completely stripped of panels.

LED colors can be changed by a radial dial (spin it until you're happy); two other buttons flank the color dial, one which controls the IO panel backlight, and one that controls the two color zones of the case (front only, internal only, both active, or off). The IO panel light is a nice touch for nighttime cable swapping.

Aside from all the lighting options, we also have an SD card reader, audio ports, and 6xUSB ports (2xUSB3; 4xUSB2) on the top and front of the case. I have a bone to pick with the SD card reader, though: The hinging front-panel cannot be closed when an SD card is inserted into the reader, despite a small (but not deep enough) cut-out being present in the panel. There's clearly an attempt to accommodate SD cards and still allow the case to close, but it doesn't quite pan-out. It's a shame, because I can't trust myself to not kick the hinged door or SD card when walking by, so I've ended up using a USB dongle instead. Were the SD card reader positioned slightly lower, if the panel had a deeper cut-out, or if the reader were just positioned deeper in the chassis, I think it'd fit much better. Leaving it exposed is to dangerous, though, as one miscalculated step will take the door off immediately.

And a small bone it was.

Moving on, the case also mentions its 4-channel fan-speed controller. Using hardware buttons on the top-right of the case, we're able to manipulate fans through a sizable range of RPMs, from off to full-blast. We tested the full speed, low speed, and off settings in our performance thermal testing (below). A series of dust filters complement the fans in the bottom-front (which extends centrally) and back-rear positions; there are also filters within the interior that guard the fans from further dust infiltration. I do wish that the rear dust filter would eject toward the left rather than back, though -- it's more accessible that way and does not require moving a massive rig!

Finally, one of the biggest offerings on the Phantom 820 is its cable management features, but we'll cover that in the appropriate, dedicated section.

All of these features do end up costing you $250, but the total package is certainly nothing to scoff at. If you're feeling overwhelmed by all of this, check out our "how to pick a gaming case" guide!

The overall quality of material for the Phantom 820 feels solid -- the exterior is primarily composed of a hard plastic and steel that doesn't feel like it's going to break. I took the entire case apart, all the way down to the chassis, and was pretty happy with the way they routed the wires: Unlike some cases I've worked with (the HAF X as an example), the 820 anchors all of its front-panel and fan connectors to the chassis frame itself, so every panel (front, sides, top) can be completely removed without fear of breaking glue joints for cabling. Unfortunately, as I worked with the case throughout the review process, I found the plastic to be scratched with unbelievable ease; the paint scratched off very easily with minor abrasion, though I was able to buff most of it out with buffing compound. Don't get me wrong -- the case was handled with utmost care, but perhaps it was just that the "gunmetal / military gray" color we received is more noticeable (or wears off more readily) than matte black. At the end of the day, it's not a huge deal. Just be extra careful with it if cosmetic blemishes matter to you. 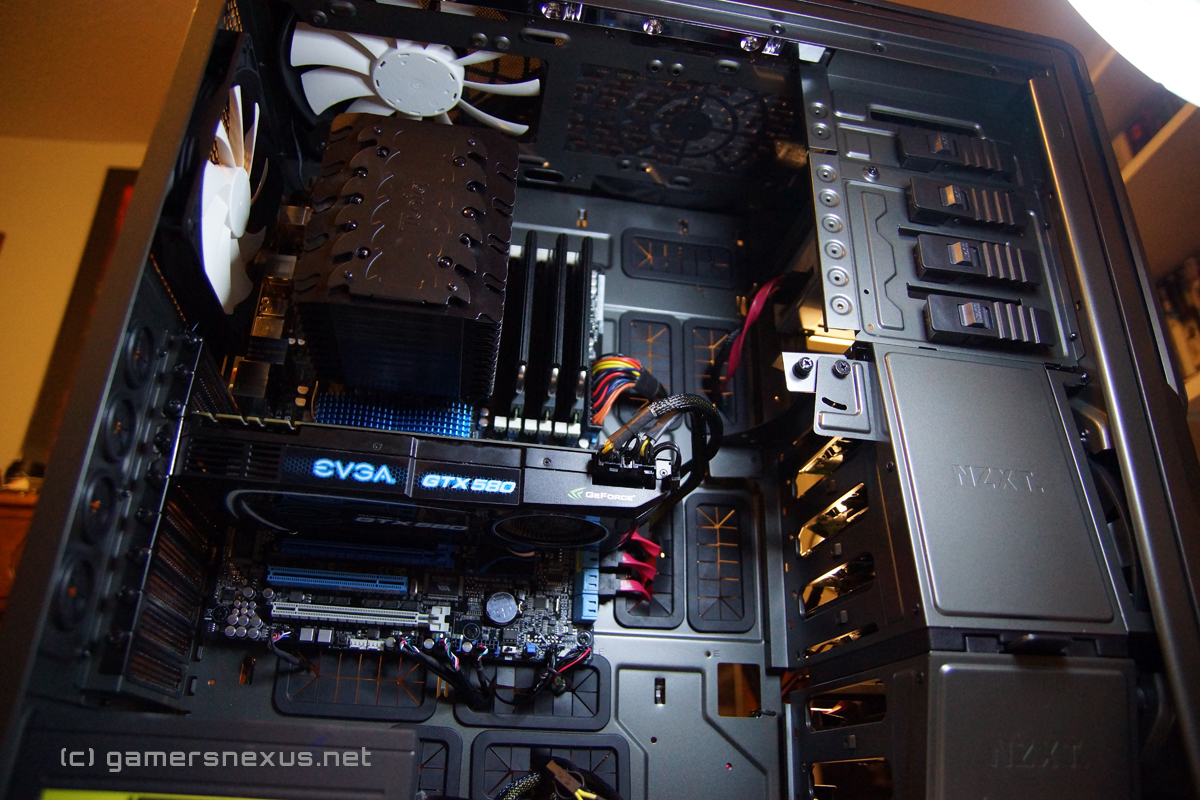 Quality on the interior mirrors the exterior: High-contrast black/white fans are equipped to the top, rear, side, and front (200mm at 800RPM for the front and top; 140mm at 1100RPM for the rear and side), thumbscrews and tool-less mounting runs rampant, and well-positioned cable routing holes saturate the massive amounts of empty space. To be fair, though, it's kind of hard not to be (in good hands) "well-positioned" when the entire mounting wall is riddled with rubber-screened routing holes, which made for the easiest cable management I've ever had the fortune to encounter.

The tool-less mounting bracket for the internal drive bays is accessed from the right-side of the case, something I'm still not used to, but you'll need to remove that panel for proper cable management anyway. On the same note, the drive cages felt exceedingly flimsy and were a bit more difficult to re-align with their mount-points than I felt comfortable with. This issue is something we've encountered consistently with several cases, but I have been most satisfied with Corsair's mounting bracket design in similarly high-end cases. One stipulation I had was on the notion of a lighter overall package; it almost felt like NZXT was trying to find places they could cut down on a few ounces (seeing as the case is already intriguingly unwieldy and heavy when filled). But at the same time, if NZXT's planning to release an ultra high-end product, they shouldn't see weight as a hindrance; users at this niche pricing level will pay for more as long as it's best in class.

Further on the front of quality control, the tool-less mounting points for external drive bays have come loose on me several times when working elsewhere in the case, even if not working near the optical drives. At least in our sample, the tool-less clips felt loose and were tricky to properly mount the drive. A simple thumbscrew would have been faster and provided more security than the plasticky mounting points.

I want to underscore the fact that, when matched up against the rest of the case's high-quality standards, these issues feel negligible. I think the next section will help illustrate why; of course, at $250, it's important to note all of these minor items so that, with any luck, they'll be improved upon for the next iteration.

Cable management is definitely the new "thing." Apparently adding an ever-increasing amount of blue LED-enabled fans got old, and at some point down the line, case manufacturers decided it was in their best interest to invest in a more immediately usable feature. Cable management was that feature. If you're new to cable management, we wrote a beginners guide over here. 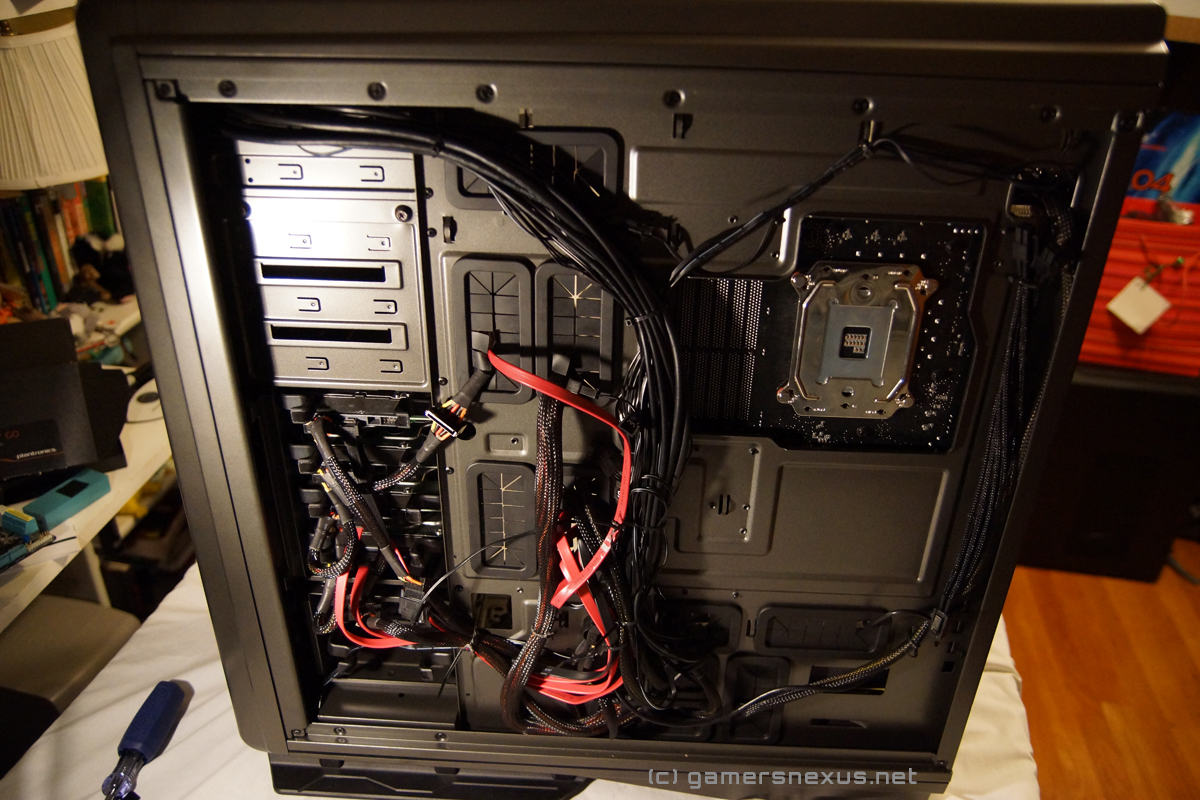 Yes, that mass of cables will actually fit with the panel on. Unbelievable.

The Phantom 820 almost feels like it went overboard with the cable routing options. Almost. I ended up using every hole to hide some cable or another, so at the end of the day, it worked out to be one of the quickest-to-manage cases I've ever built up. It has -- let me count them again -- ten grommet-encased routing holes, two cleanly-cut square routing paths for certain cables (like 8pin power), and an abundance of anchor points for cable ties. On top of that, many of the front-panel connectors ship pre-tied (although I had to re-route them to a lower hole), the fans are pre-connected to the HUE controller, and NZXT hides a secret EPS12V extender (one of the nice ones - the type sporting their Premium Cable Kit housing). This is where the pampering comes in. Remember all those issues with mounting drives? They were quickly minimized by the amount of work reduced by these pre-managed features.

There's not one place in the sidewall that you'll say, "I wish the routing hole were here instead of there" (something I found myself saying constantly with NZXT's LEXA S); no, you won't say that at all -- and that's because they're everywhere. There are very few spots where you cant hide a cable. Better still, the way the sidepanel is designed allows for easy hiding of clustered/unused cables from non-modular PSUs (because the acrylic window is focused on the GPU / CPU view), so you won't have an ugly view from the outside. Granted, I doubt many system builders who drop $250 on this case will be using a non-modular PSU, but we use them for every case review so we can better analyze the management options.

Continue to the next page for benchmarking stats and performance / thermal testing!