This one's a classic case of "old but good."

The Tuniq Tower 120 Extreme first launched right around the Nehalem days, and despite its age, is still ranked as one of the top CPU coolers presently available. After our recent look at NZXT's brand new Respire series, we figured we'd start building our benchmark database with some stellar performers.

In this Tuniq Tower 120 Extreme review, we'll benchmark the cooling performance, provide a video hands-on, and compare a few CPU coolers/heatsinks against each other. We also plan to bring up heatsink and cooler design philosophy, hopefully helping you make purchasing decisions.

As a quick note before we delve into more detail, being that this cooler is now a bit dated, you'll need to either grab the Rev.1 version of the cooler or a socket converter mount if you plan to purchase it for modern CPUs (LGA1156/1155). Rev.1 includes native 1156/1155 support.

With the Tower 120 Extreme, everything comes down to heatsink design: Heatpipe placement and diameter, surface smoothness, mounting surface area, fin design, and overall layout have all contributed to the unit's success over the years. That's why it's important to briefly look at each of these elements, determine why they're good, and then use this information to purchase coolers now and in the future. 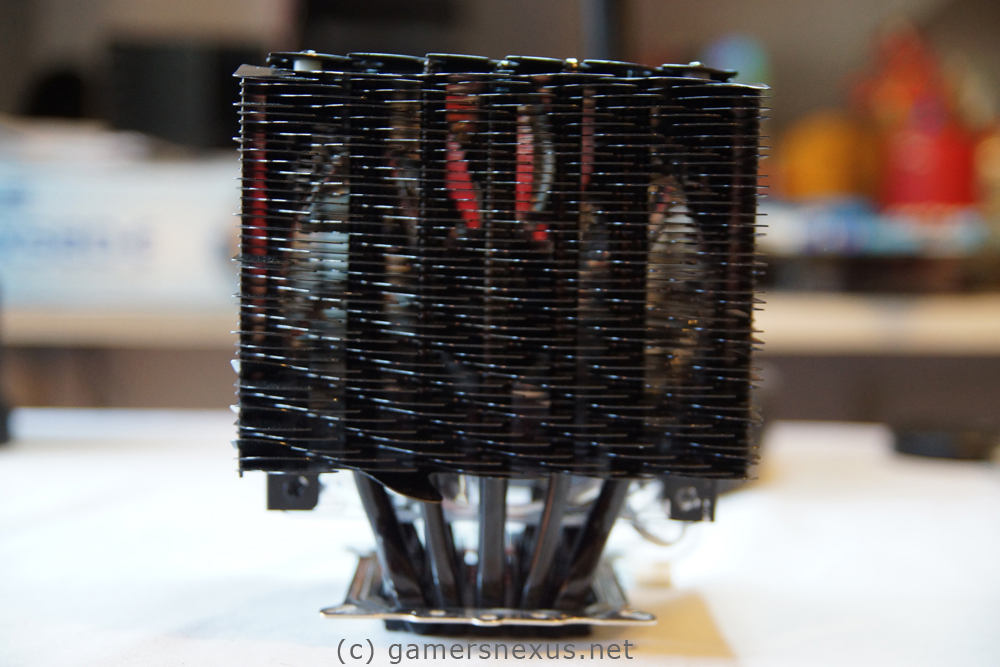 High-frequency semiconductors like CPUs run hot -- hotter than boiling point, in some cases -- and will catastrophically fail without a way to siphon and dissipate heat. Their heat is an inherent effect of high-frequency and high-voltage devices, and as we go through shrinks on the die with smaller manufacturing process (we're not far from 14nm tech), that heat would be amplified without increasingly advanced thermal management. A good portion of thermal management is handled on the chip or firmware itself -- modern CPUs will modulate power consumption based upon their immediate requirements, so it's not uncommon to see a chip go from, for instance, 150W to 50W in a timeframe faster than humans can process; these fluctuations in power consumption are just a small, top-level instance of thermal control, but certainly aren't all there is to see. Let's move back to coolers, though.

On the most fundamental level, a heatsink's only objective in life is to siphon and dissipate heat from an integrated circuit. Part of achieving a high thermal conductivity is evident in the contact point of heatsinks: A heatsink must maximize contacted surface area and minimize surface roughness (it's no good to have a huge mounting region if the chip-to-copper contact is irregular). One of our complaints about the Respire T20 was its small surface area that left almost no room for error -- this diminished area meant less CPU coverage, potentially hindering the unit's ability to cool effectively.

In this regard—as a consumer—it's important to look at the number of chip-contacting heatpipes and their size (are there three 8mm pipes or four 6mm pipes?), as well as the overall smoothness of the contacting material and surface area. Any crevices in the surface can be partially remedied by a thermal interface (like thermalpaste), as we demonstrate in this article, but will never offer the theoretical effectiveness of a perfectly smooth surface. 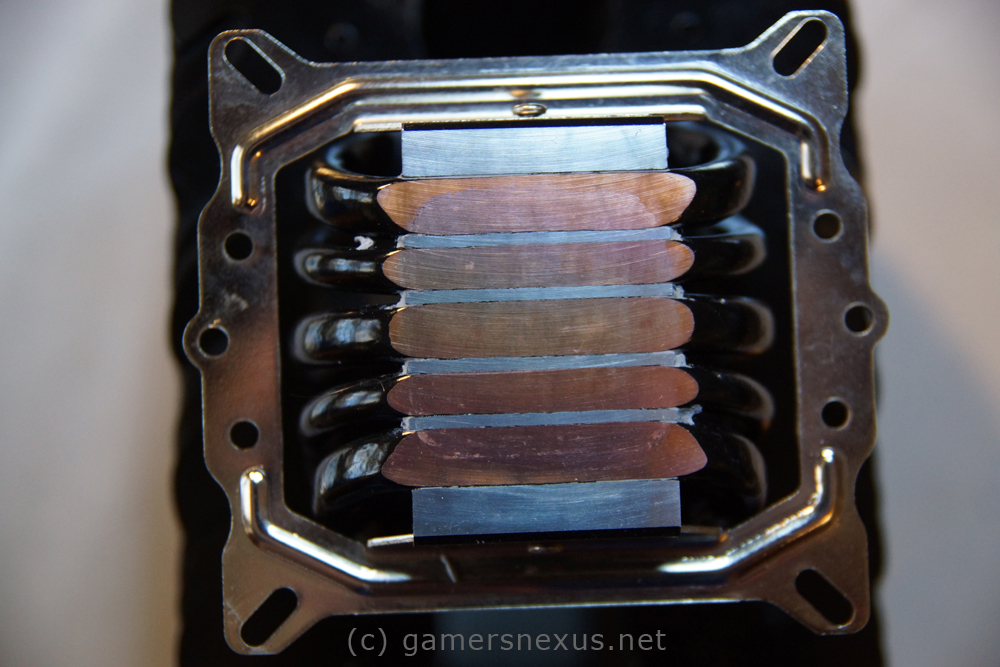 The Tower 120 Extreme dramatically illustrates each of these primary design elements, making it an excellent subject for demonstration.

First, it has five fully-exposed heatpipes on its underside -- three 8mm and two 6mm pipes -- with a surface roughness of around 16 microinches, making it incredibly smooth and optimizing contact. Following the heatpipes upward, we find that mounted directly above them is a traditional, finned heatsink (a feature sorely lacking from similar mid-range units) and enough clearance for larger capacitors and VRM heatsinks in the region.

The heatpipes continue into the center of the sink, which has a hollowed out interior that is outfitted with a 120mm, 2000RPM fan that operates on magnetic fluid-dynamic bearings (read more about how these work here). The fin design/engineering is done in a way that is meant to help guide air to this centrally-positioned fan; the central location theoretically helps distribute heatsink cooling more equally (rather than having a heated backside and cool face), though it does get filled with dust more rapidly than the exterior-mounted designs I've worked with. 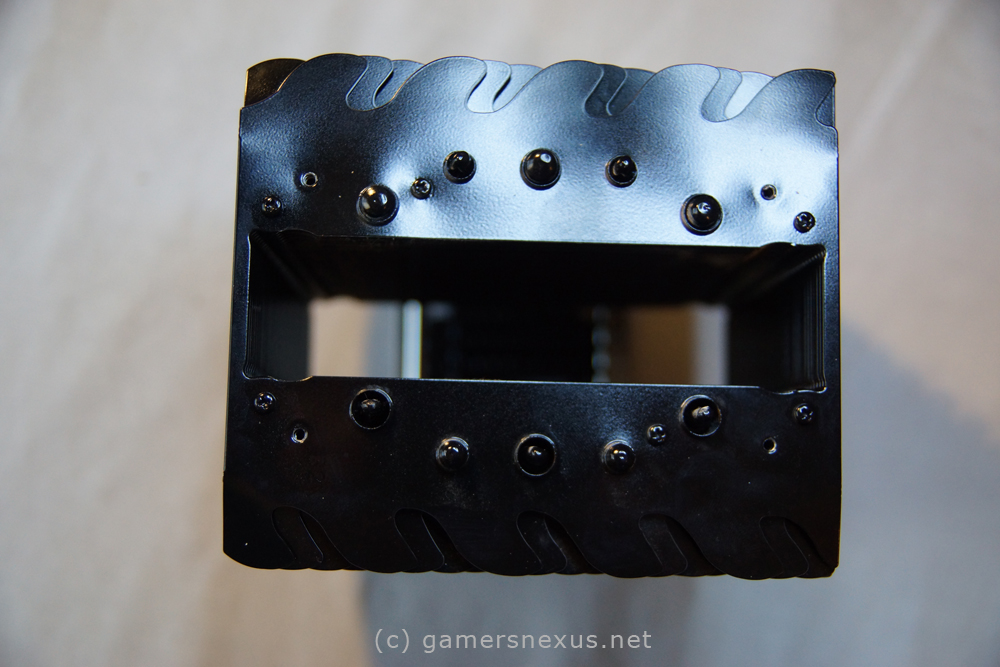 There's a substantial chunk of metal on either side of the fan, which further helps dissipate heat from the CPU. That's all great sounding, but let's see how it performs on our (very hot) test bed:

As we're just building up our cooler database, we're comparing Tuniq's Tower 120 Extreme to the very recent NZXT T40 (which is slightly cheaper), the T20 (which is much cheaper, about 1/3 the price), and our stock Intel cooler. Hopefully these graphs will help illustrate whether or not an aftermarket cooler is necessary for your purposes. 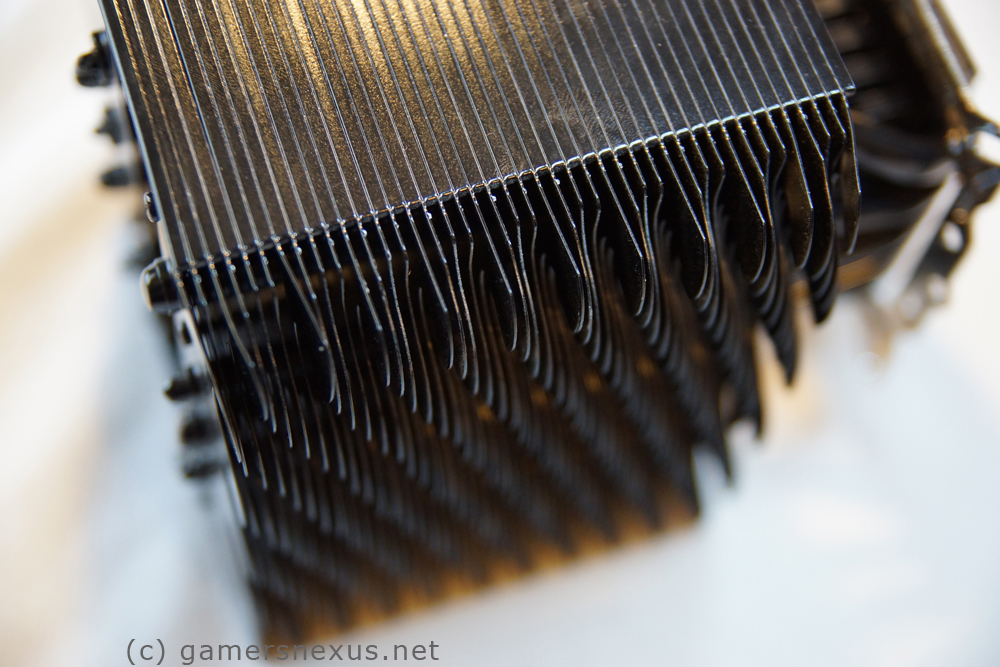 After this idle time, the system will launch a Prime95 instance running eight torture threads on Large FFTs for maximum heat and power utilization. This is run for 15 minutes, throughout which the logging utility will collect the data we used in the below charts. A final round of idle time is allowed to ensure data consistency.

We keep a consistent case and airflow configuration for all CPU cooler tests. When under load, the CPU operates at 150W.

As it turns out, the laws of physics don't change too often; heatsink design, as a result, tends to remain fairly constant within the computing world. We know what should work, it's mostly a matter of sacrifices and optimization at this point (Do you want a compact heatsink? You may have to sacrifice some performance).

Our first test uses the stock thermal compound for all units involved. You'll see that the Tuniq 120 Extreme excels in this region, clearly beating out the more recent Respire coolers (though they are more affordable, too). Sticking a second fan on a T40 Respire really gives the Tuniq cooler a run for its money.

The above is a control. The Tuniq cooler ships with better thermal compound than we used in this control (we use Antec Silver formula, 5.3W/mK; Tuniq ships TX-3 6.3W/mK). The point here is to eliminate thermal compound as a variable, hopefully focusing on design and engineering for the cooling effectiveness.

The conclusion is that adding an additional fan and stock thermalpaste to the Respire T40 means it will put it on almost equal ground with the stock Tuniq Tower 120 Extreme. This also removes the requirement to buy an adapter bracket for modern coolers, of course.

Tuniq's Tower 120 Extreme may be aging, but it's aging well. Its design is solid and has resulted in its tenure at the near-top, but there are, of course, challengers who cool much more efficiently in modern cooling units. An H60 or H100 are not too distant from the price of the Tuniq and they're quiet and cool, so there are certainly a lot of options.

Now, of course, I don't want to make it sound ancient -- the Tuniq Tower 120 Extreme Rev.1 now ships with LGA1155 and LGA1156 adapters, so it can be used with just about any Intel socket and most AMD sockets. 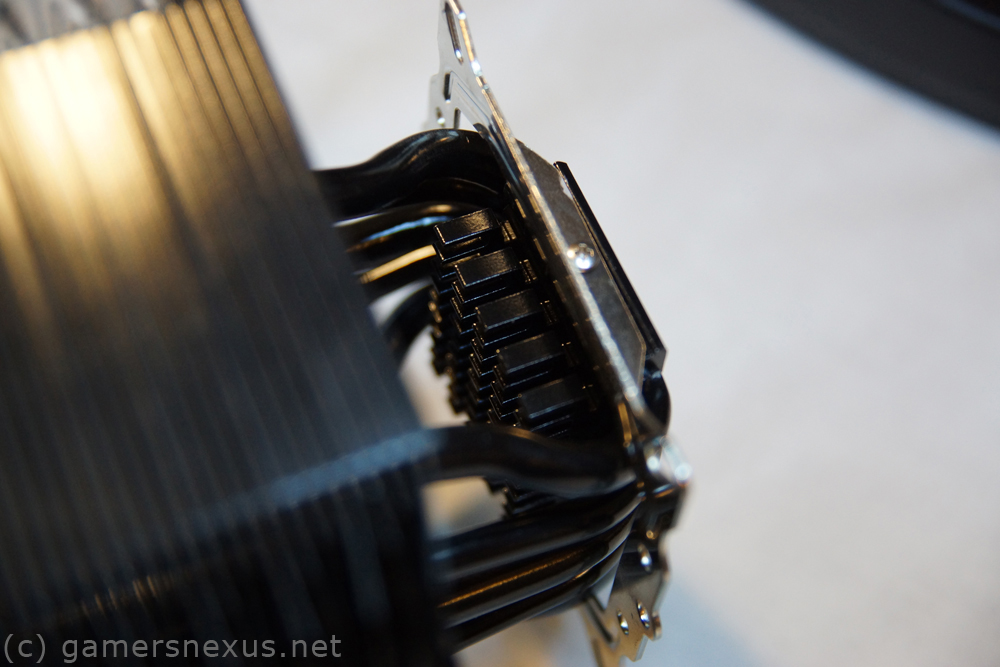 The main objective of this retrospective / review was to present design qualities that should be present in most coolers, so I hope you've taken away enough knowledge to help aid in purchasing decisions. It also helps to build up our new CPU cooler database, so that adds to comparative options as we review more coolers!

If you're interested in picking up this Tuniq option, it's still good and still cools well. Better than most. It's also been adapted to 1155 and 1156 in Rev.1, a recent iteration of the cooler.

Let us know in the comments if you have any questions! Our hardware forums are always open to those who need system build support.