Adding an aftermarket CPU cooler to your gaming system will undoubtedly tighten thermal differentials to a more predictable range, and while semiconductors do "like" heat to a limited degree, CPUs have trouble operating under intense, fluctuating thermal load. Aftermarket CPU coolers, much like RAM, are a commodity in the mainstream market; they're not necessary to operate at stock frequencies, but are nice to have for decreased noise pollution and decreased room temperatures (I'm only sort of joking - my system easily increases room temps by a degree or two).

For lightweight overclocking, of course, the story is different -- these coolers are necessary to protect the chip and increase core stability when under load. There's a lot of engineering that goes into a quality CPU cooler and, as with any quality engineering, you won't find the best possible designs for entry-level coolers. There are elements to prioritize, though, and we can uncover what differences make the largest impact by benchmarking a wider array of units.

This review benchmarks Cooler Master's Hyper 212 Plus, one of the best-known CPU coolers on the market, and then compares it vs. the NZXT Respire T20 / T40 and other models.

CM's Hyper 212 series has made a deep impact on the system building community, and Newegg's reviews prove that -- the Hyper 212 Plus (sometimes called Hyper 212+) has more than 3,700 user reviews and the Hyper 212 EVO has more than 1,100. They've been on the market for a while and have been proven in rigs, but I never really thought they were all that good, if I'm honest. Other options seemed better, even if they were a few bucks more expensive. The thing is, though, not every rig can justify an extra $10-$20 on a cooler when it's simply not going to need more than moderate thermal dissipation. That's why I was eager to pit Cooler Master's Hyper 212 Plus vs. NZXT's Respire T20 / T40 coolers that recently came out, and we have those benchmarks below.

As a quick aside: If the noise reduction aspect of aftermarket cooling is enticing to you, check out GN Nick's latest "Quiet Down Your Gaming PC" article. 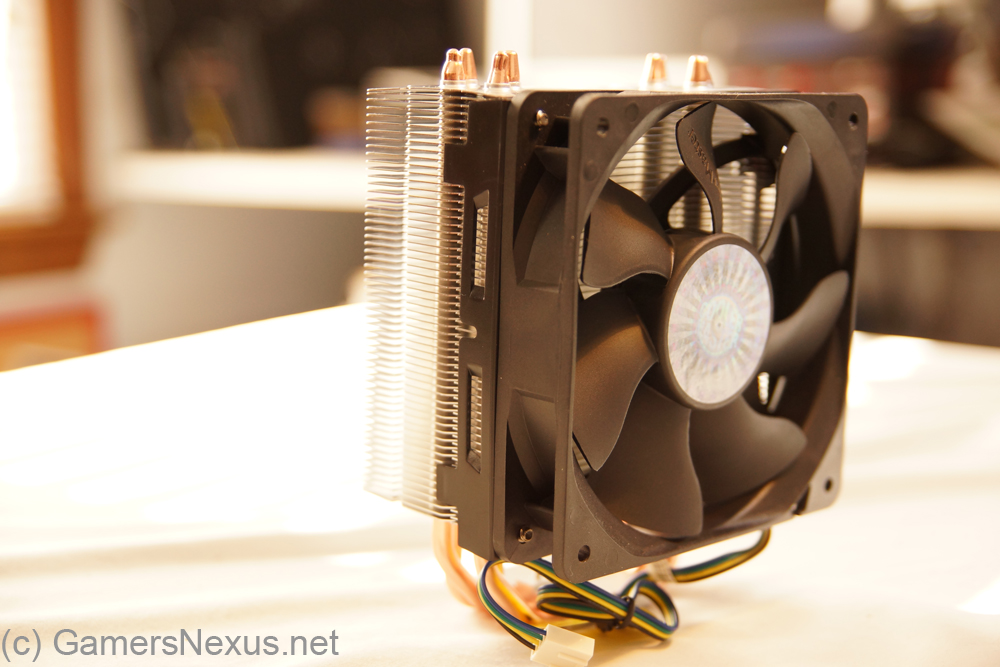 In terms of compatibility, the Hyper 212 Plus natively supports every major socket type out there - AM3+/AM3 and LGA1155/1366/775 compatibility guarantees fairly universal socket acceptance. The cooler stands at 158.5mm from the board, putting it at a fair "medium" in terms of from-board height; for this reason, the cooler will fit in most gaming-class mid-tower ATX cases and should even fit in a few small towers. With a weight of 626g and its four-corners mounting bracket, the strain placed on the board is fairly minimal when compared against beefier coolers.

The most immediately noticeable feature of the cooler is its flattened cold plate, a combination of aluminum plating and flush copper heatpipes. Four heatpipes at 6mm diameter are used for the cooler, with a sliver of the aluminum cold plate between each pipe. This was particularly interesting to me -- upon receiving the cooler, having worked with the Tuniq Tower 120 Extreme and NZXT T20 / T40 recently, I immediately noticed the relative "scrawniness" of the 212's heatpipes. Despite their smooth surface, the 212's four heatpipes are smaller than what we're used to (the Respire T20 and Respire T40 use 1x8mm+2x6mm and 4x8mm, respectively). And that's where I was most intrigued: Would four smaller heatpipes with a flatter contact surface flaunt an advantage over mixed-size heatpipes with a noticeably rougher contact point?

It's not quite that linear, given the glaring surface area and other design differences, but nonetheless, it gave us something to get excited about.

Cooler Master's Hyper 212 Plus ships with a fairly standard sleeve bearing fan (read about fan bearings here) with a sort-of flower petal blade design, which contrasts starkly with NZXT's more typical scoop shape. The fan is rated for 600~2000RPM (PWM) operation and can push 21.2~76.8CFM, which isn't too bad given the rated noise spec of 13-32dBA.

Cooler Master Hyper 212 Plus: What's in the Box? 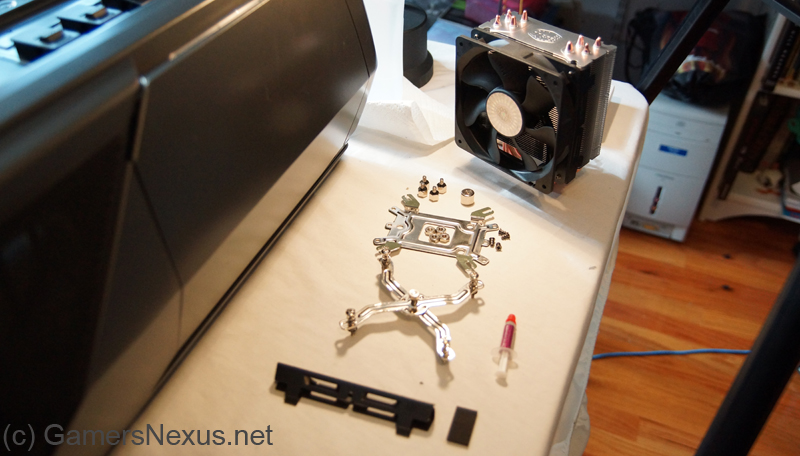 Like many of the other air coolers of its entry-level caliber, the Hyper 212 Plus is dual-fan compatible and goes through pangs to brag about it (we test its merit below); the box ships with an extra plastic fan mount and mounting screws, which can be used to equip the unit with any average 120mm fan.

You'll also receive a tube (not just a one-time use packet!) of CM's unspec'd thermal compound. We reached out for the W/mK specification to no avail, but will update this page once we've received a response. Regardless, the box includes mounting brackets for all your LGA needs: 1155, 1156, 1366, and 775 sockets, as well as AMD's AM3+, AM3, FM1, AM2+, and AM2 sockets.

After this idle time, the system will launch a Prime95 instance running eight torture threads on Large FFTs for maximum heat generation and power utilization. This is run for 15 minutes, throughout which the logging utility will collect the data we used in the below charts. A final round of idle time is allowed to ensure data consistency. Redundant tests are run in the event of unexpected results.

We keep a consistent case and airflow configuration for all CPU cooler tests. When under load, the CPU operates at ~150W. 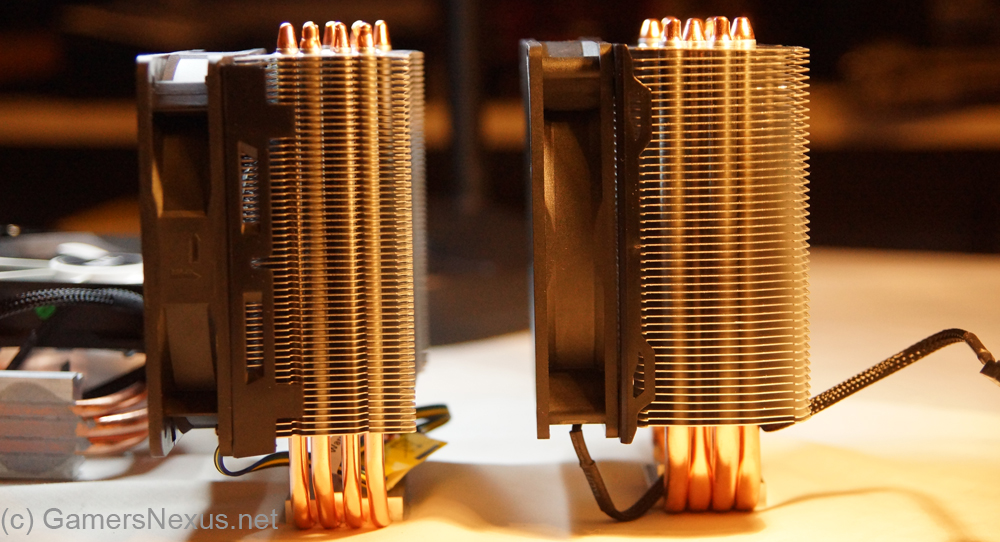 I think a proper NZXT Respire T40 vs. Cooler Master Hyper 212 Plus test is in order, given their proximity in pricing; the T40 hovers at around $40, the Hyper 212 Plus ranges $30-$35, depending on how Newegg feels when it wakes up.

To answer the "is an extra fan worth it for a Hyper 212 Plus" question we've received a few times, we tested the cooler in these arrays:

And just for fun:

Here are the results:

The above chart shows the stock thermal compound performance for all tested coolers. CM's Hyper 212 Plus operated toward the bottom of our pack, running 2.5C warmer than NZXT's new Respire T40 cooler and 7.5C warmer than Tuniq's Tower 120 Extreme. Still, we saw nearly a 20C improvement over stock, which isn't anything to laugh at.

Out of curiosity, I swapped out the fan for the one included with NZXT's Respire series (mostly for fun), and even though the Cooler Master unit operates at 200RPM faster, I was interested in seeing the numbers. The charts aren't even worth plotting -- the CM Hyper 212 Plus' stock fan runs at roughly 1C cooler than NZXT's fan when mounted to the CM unit.

So is it worth buying an extra fan for your CPU cooler? Well, our charts clearly show that there's a significant gain in performance for the T40 with two fans, but almost no discernable difference between the Hyper 212 Plus in single-vs-dual configuration (0.8C, which is within margin of error). So no, it is not worth it. Not at all. You'd be better putting that $8 toward something better, like socks... or garbage.

If you're curious as to why the Hyper 212 Plus sees no performance advantage with an added fan, here's my theory: I believe the single (shipped) fan fully saturates the thermal dissipation capacity of the fins, given the relatively medium/small-ish size of the aluminum sink. Adding a second fan does little to expedite the thermal dissipation process as a result of an already-efficient design. With the Respire T40, which is noticeably wider in breadth and fatter in depth, there is a much more noteworthy difference between single-vs-dual fan arrays.

We went into this test without knowing the thermal conductivity rating of CM's product, but the test shows all. Our controlled compound (this is used to eliminate a variable in testing), which is rated at 5.3W/mK, shows that the stock compound is more-than-acceptable for the CM unit, given less than 1C of difference.

And here's our newest chart in the CPU benchmark suite (please let us know what you think of it). This one measures dollar-per-degree value of coolers, as explained in the above "testing methodology" section.

The Hyper 212 Plus is marked in orange. With an assumed $8 average cost for additional 120mm fans, the Respire T40 and Hyper 212 Plus come out on top. This is from a pure value perspective, so if you could care less about a degree or two C, it should provide a solid foundation upon which you can base purchases.

It's fair to say that Cooler Master's Hyper 212 Plus has been thoroughly dethroned by NZXT's new Respire T40 cooler, doubly so when saturating the dual-fan bandwidth on the T40. It's tough to recommend the Hyper 212 Plus when faced with better options for an almost identical price, not to mention the quality issues I encountered. 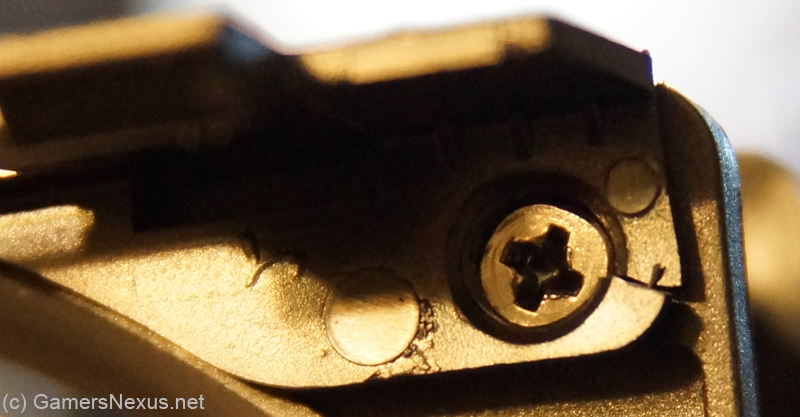 The included fan mounting bracket snapped at the threads when I installed the secondary fan, leaving me (obviously) uncomfortable with the fact that this fractured plastic now held a loose metal object within the test system. Further, while the load distribution of the CM mounting bracket is theoretically preferable to NZXT's somewhat annoying installation procedure, the reality is that the Hyper 212 Plus is tedious to maintain and install. Due to threading issues on the mounting bolts, each time I wanted to cleanse and re-apply thermalpaste, the backplate came undone and scattered screws across the seven seas.

This in mind, coupled with relatively mediocre cooling performance when matched the more recent NZXT products, I'd have to say the Hyper 212 Plus' era of rule is over. Consider the T40 as a better alternative for a few bucks more.