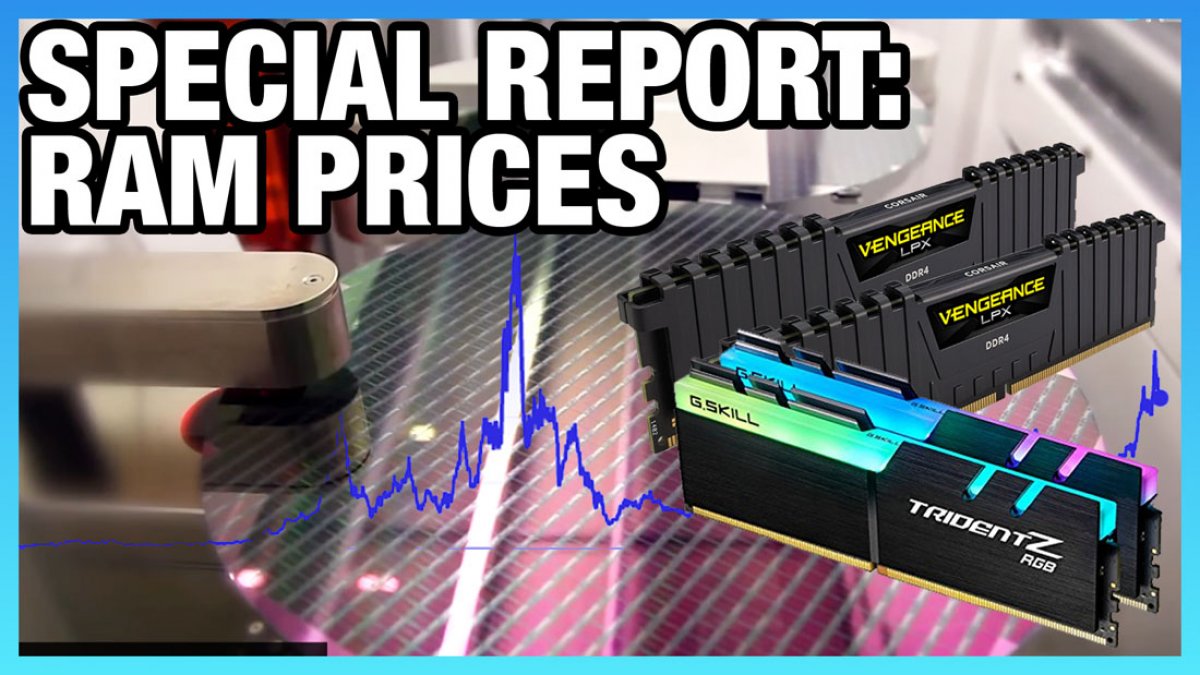 We previously ran a RAM Price Report that dug into five years of data for memory prices, working with PCPartPicker to pull data on kits of DDR4-2133, for instance, showing a steep upswing in price from 2016. DDR4 today costs as much as it did when it launched, if we look at the chart below: 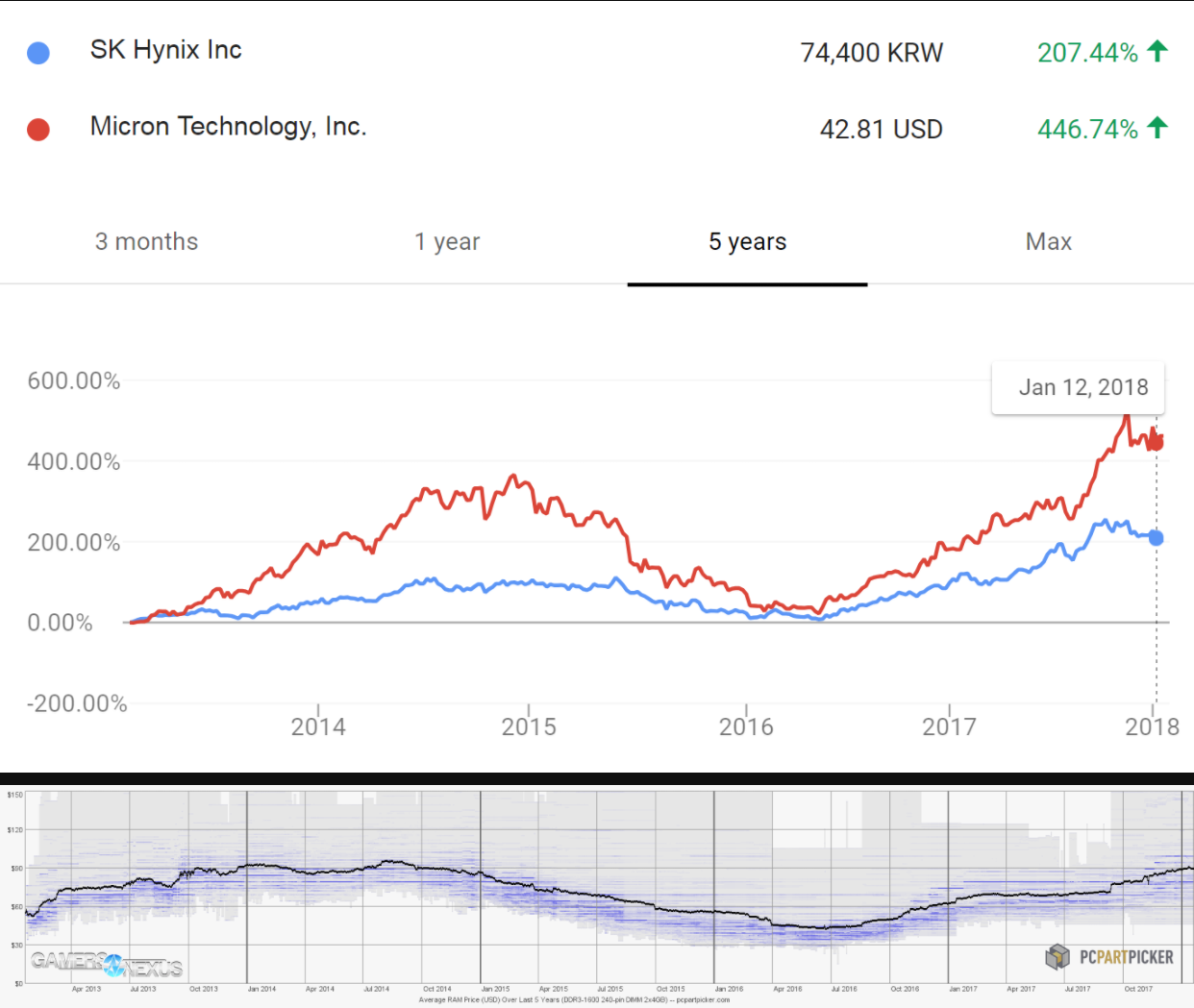 Supply Cost of Memory to Manufacturers 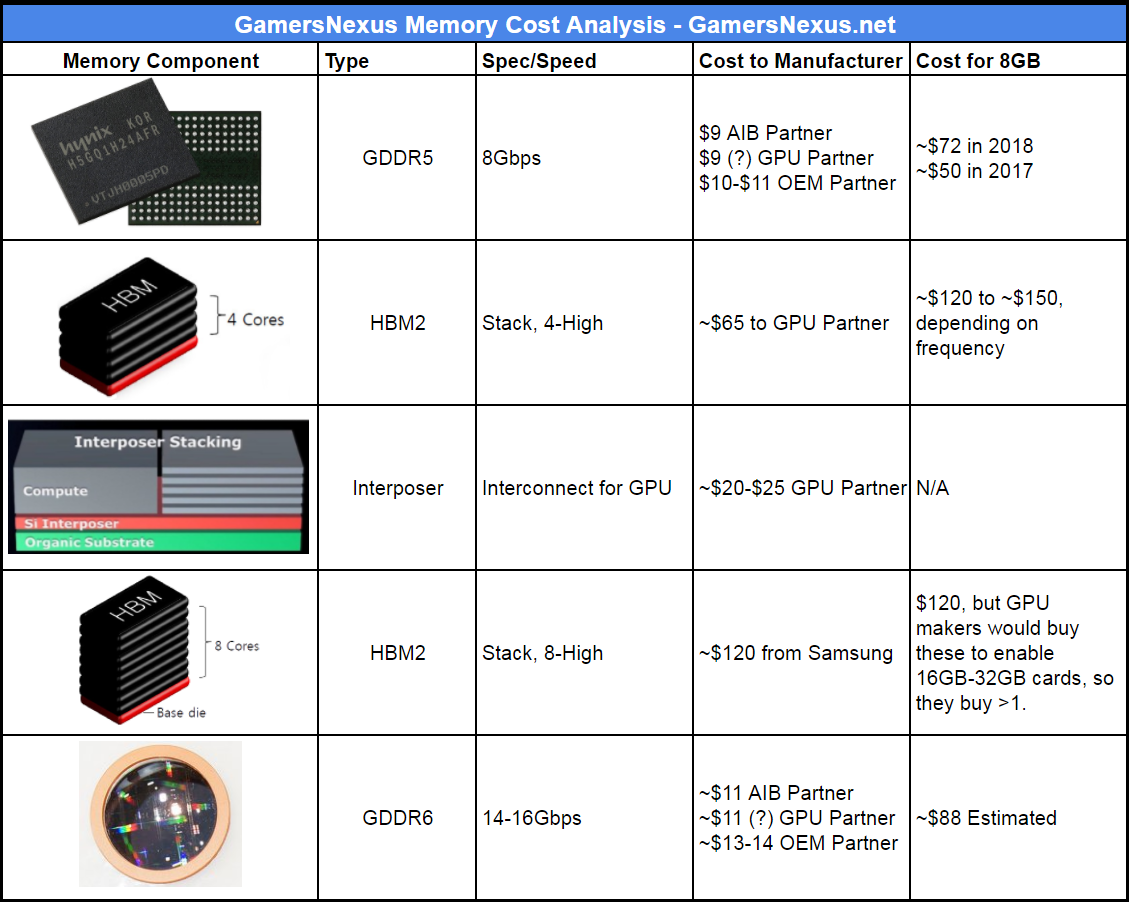 The actual cost of a memory die seems like the best start for our story. We’re talking the cost that NVIDIA, AMD, Corsair, and all the other manufacturers pay. This is what the suppliers sell it for.

Modern superfabs can cost upwards of $15B and are multi-story fabrication facilities that are capable of outputting 150,000 to 200,000 wafers per month. A wafer is a horizontal slice in a silicon crystal, a monocrystalline cylinder that gets cut into circular wafers, which are then diced into individual dies. SK Hynix is one of the leading memory manufacturers, and often the only alternative to Samsung. Hynix’s new Korean superfab yields approximately 150,000 wafer per month at present, and is ramping to 200,000. Each wafer yields about 1500 dies, we’ve learned from inside sources at the company. Those 1500 dies can be allocated to DRAM, Flash, GDDR memory, or HBM, depending on what Hynix is building on that line.

We know some prices here. SK Hynix negotiates prices with each company individually. For GDDR5 memory at 8Gbps speeds, SK Hynix sells to GPU vendors and board partners at about $9 per unit. OEMs like Dell and HP pay $10-$11 per unit. A GPU might have 8 of these on it, which instantly creates $72 of cost. It’s no wonder that even the RX 470s and 570s have skyrocketed in price.

Consider next that we know GDDR5 memory prices were about $25 lower for video card makers last year, when we previously had insider quotes at around $50 to outfit a card with 8GB of GDDR5. This is reflected in some MSRPs that have officially been increased.

As for HBM2, that’s where it gets interesting. You may have noticed Vega’s limited supply since launch: There are two reasons for this, but we’ll only get into one of them today. Vega and the Titan V both use high bandwidth memory 2, or HBM2, for their framebuffer. Adding to our chart, a stack of 4-high HBM2 is sold for about $65, and AMD uses two of those on its Vega 56 and 64 products. That’s $130 of cost right there, and that doesn’t count interposer cost. The interposer costs around $20-$25 and has its own yield costs, plus package yields, and is all assembled by a few different package assembly plants.

NVidia, on the other hand, has started transitioning toward 8-high stacks of HBM2. Our understanding is that Samsung charges upwards of $120 per stack for these, though nVidia may get special discounts of some kind.

For perspective, back when AMD began planning its Vega memory purchases, the HBM2 prices were pitched at around $30 for a 4-hi stack. That changed as the industry found itself running into cleanroom space limitations, as the suppliers publicly state. That’s some perspective, and gives some insight as to the limited availability of Vega at MSRP even at its launch.

As for the forthcoming GDDR6, which should be on nVidia’s new GPUs later this year, that’ll cost manufacturers about 20% more than GDDR5. If a vendor pays a sweetheart price of $9 for 8Gbps GDDR5, they can expect to pay just under $11 for a higher speed GDDR6 module.

As for DRAM, we used our custom GN script to scrape daily average selling price for DDR4 memory from January until now. We plotted an overall downtrend in price for DDR4-2133 and DDR4-2400MHz memory at 8Gb and 4Gb die sizes. At the beginning of the year, we measured 8Gb memory at $9.6, dropping sharply in March, just like the Flash that you’ll see later, to $9.15. The price then climbs a bit and flattens. It’s down overall for the year, but still high. 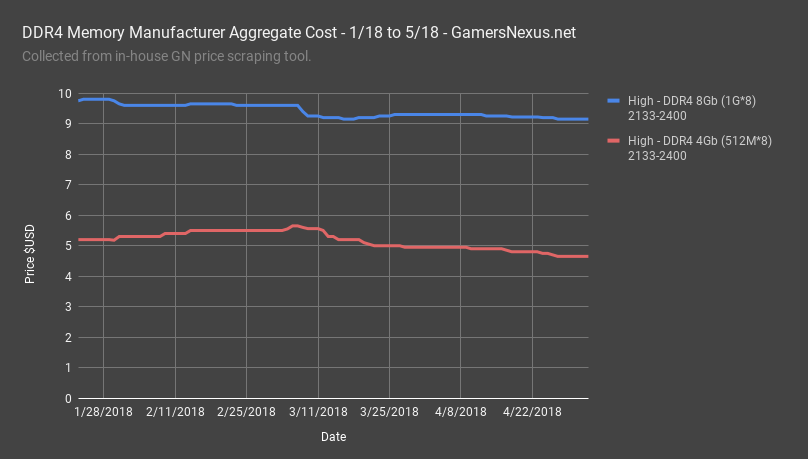 The 4Gb memory fluctuated more, climbing inversely to the 8Gb memory in March. 4Gb memory went from $5.2 to $5.65. As a reminder, if you’re putting multiple dies on a stick of memory, that can start adding up. Not terribly fast, but a few dollars. 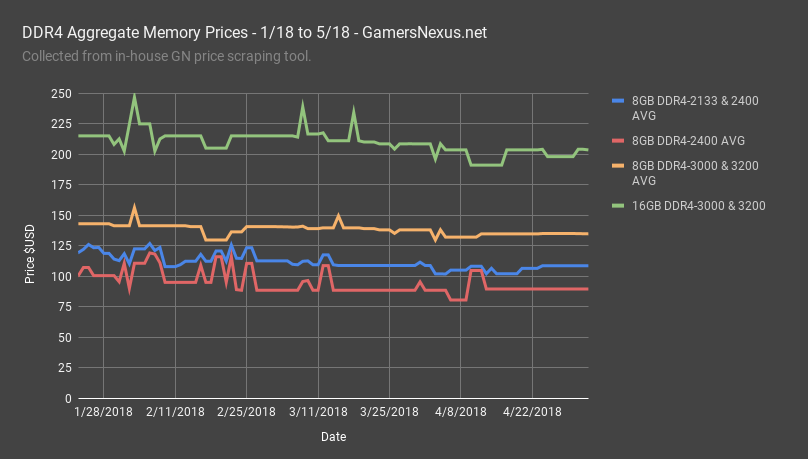 Critically, what we also know about DRAM is that server and enterprise users create all the markup. A memory die can sell to a server vendor at 60% profit margins, which is absurdly high in any industry. Server users get the best memory, located centrally on the wafer, as the perimeter of the wafer can suffer from lithographical limitations that may result in lower quality memory. This type of memory would be unacceptable for server use, and so the central, prime real estate on a wafer is reserved for servers. It’s the outer edges that get used for something like Flash, DRAM, or GDDR memory.

Speaking of Flash, our sources have informed us that Flash memory is one of the easiest products they make to sell. Using our script to scrape daily prices of Flash supply for the past 5 months, we plotted this chart. This is an average Daily High price for 64Gb, 32Gb, and 16Gb Flash. We plotted an average selling price, or ASP, of $4.8 to $4.85 for 64Gb from January to March. In mid-March, we saw a sharp downtick to the tune of 5%, dropping to $4.5. This has since begun trending back up. 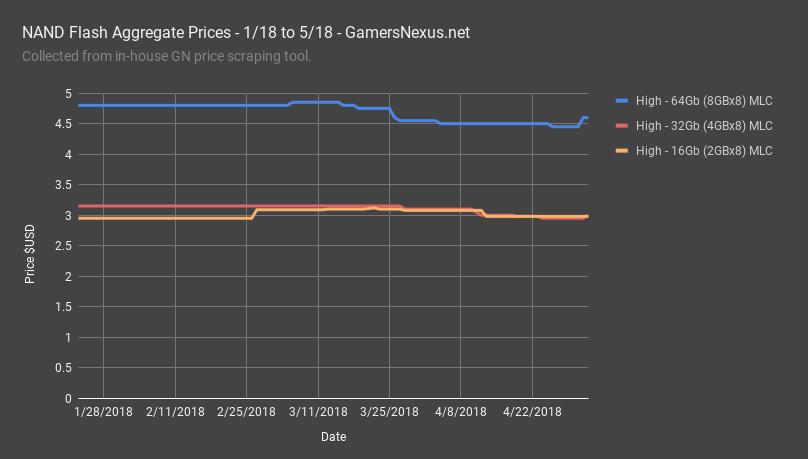 Flash memory has been somewhat stabilized, a much different behavior than what we’ve seen in DRAM. Flash memory manufacturers have finally come to consensus on moving to 3D NAND or VNAND, and have largely consolidated on 64-layer designs – although Hynix is moving into higher layer counts. This consolidation of technology has allowed Flash memory to reach a more stable output, as the R&D process to develop multi-layer VNAND designs cost production resources during the period of development.

As memory demand has continued to climb, memory suppliers have changed their objectives: Micron publicly stated that the company is no longer interested in gaining marketshare, and is instead focusing on profits. Other companies could follow suit, and if that’s the case, that means competition slows down and profit goes up in conjunction with prices. In speaking with our sources at suppliers, we’ve learned that these companies are making more money than ever before, and that they treat everyone who isn’t a server or enterprise company as lower priority. The margins are made in enterprise, and that means DRAM makers like Corsair, Adata, et al. are forced to increase their sale price to retailers to account for the higher supply prices.

We also mentioned to our sources that some analysts had projected memory prices as returning to normal come the end of 2018, to which our contacts laughed and noted, “yeah right, not any time soon.”

We’ve now detailed consumer prices (in part 1) and supplier prices (in this part). We’ll continue to follow this story as our software scrapes pricing data.