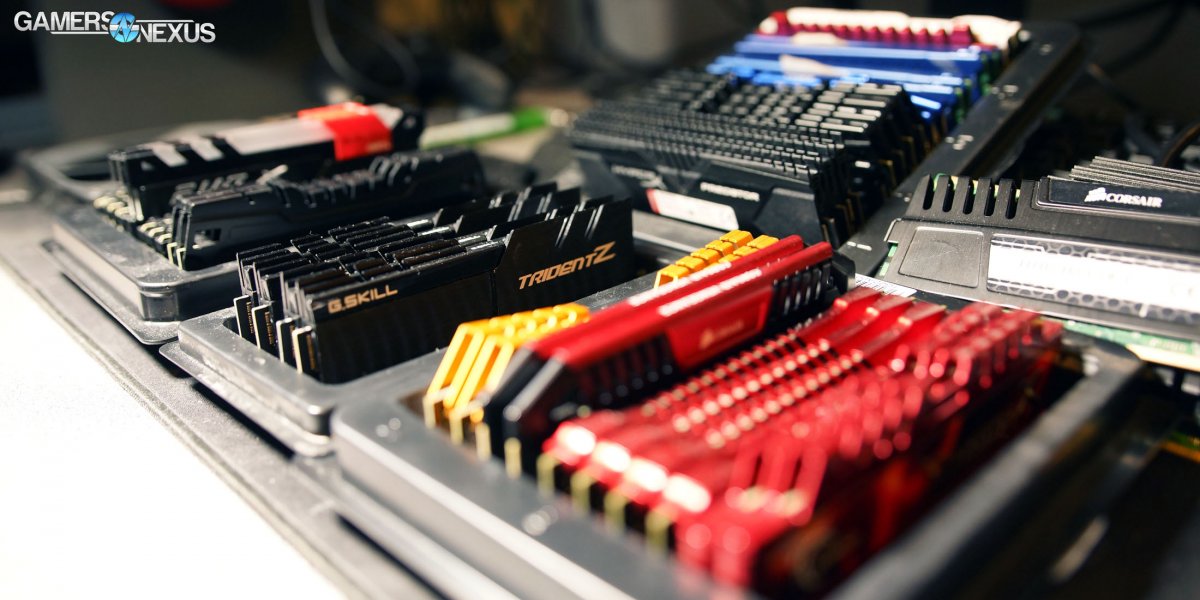 The simplest way for us to start comparing prices was to look at our own Newegg purchase history. GN staff members have bought multiple memory kits over the past few years, and almost all of them have increased in price since.

In the worst case above, we plotted a monthly price appreciation of $2.25, month-over-month, between May, 2016 and today. That’s better percent gains than many stocks; you could have purchased a truckload of memory at the dip in 2015/2016, then sold it for 2-4x the price after using it in a system.

Four samples don’t a scientific study make, but they really bring home the point: A PC builder might not have been able to build a bargain-basement PC in 2011 if DDR3 cost then what it does now. For one of the cheapest 8GB DDR4 sticks out there, GN’s Steve just paid twice what we did for two mid-range 4GB DDR3 sticks seven years ago. We’d usually blame overzealous pricing algorithms in combination with the dwindling inventory of DDR3, but these aren’t isolated examples. 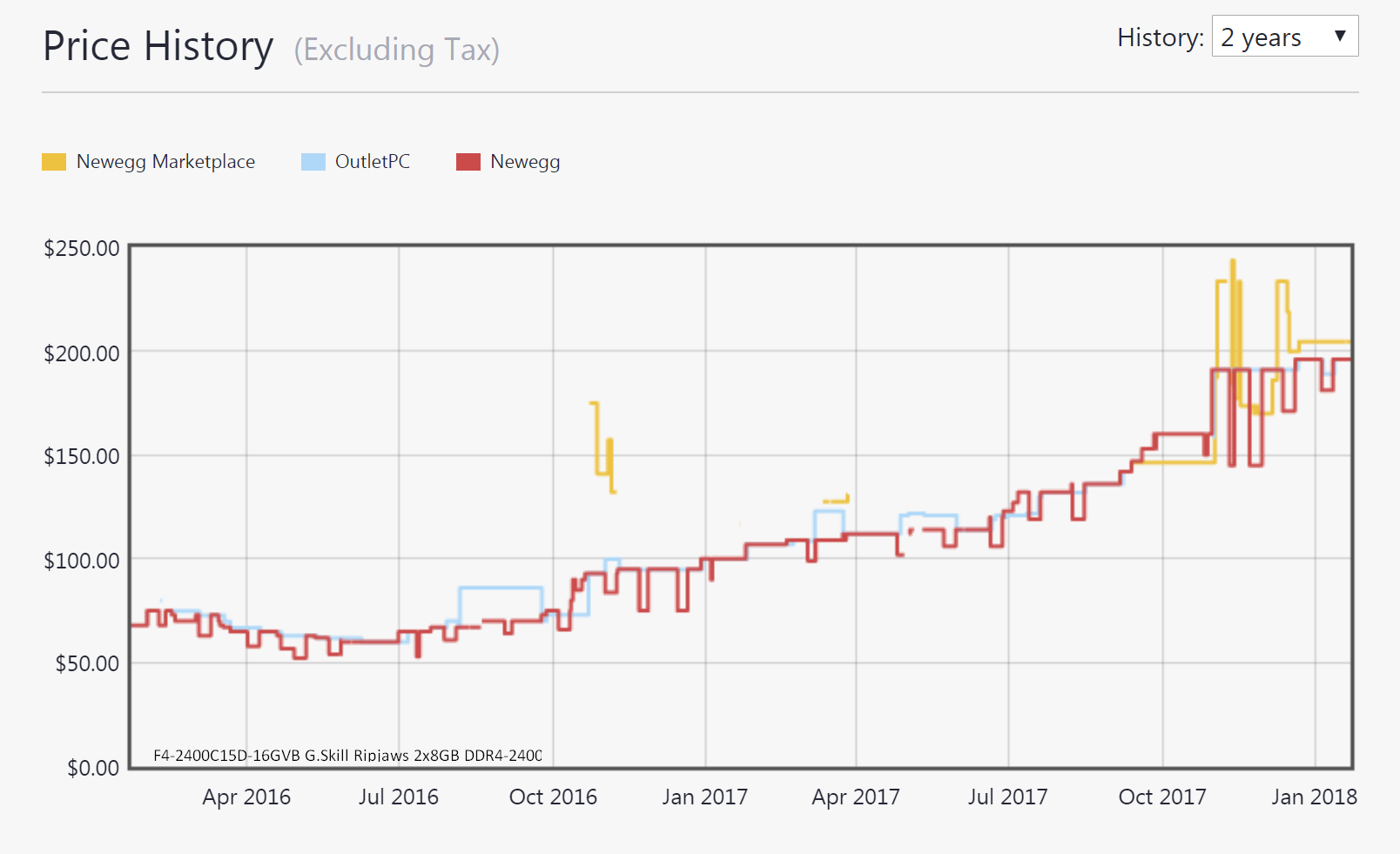 PCPartPicker automatically generates price history graphs for each of these kits, and all of them trend upwards on all retailers logged (primarily Newegg and Newegg’s third party sellers). GamersNexus worked with PCPartPicker to generate additional charts, found further below.

There’s a handy page with graphs recording general trends, categorized by memory speed and capacity, which proves that the prices of our kits aren’t flukes: 2x8GB DDR3-1866 kits really have increased roughly 175% in retail price, probably made worse by manufacturers shifting to DDR4 production while customers desperately try to save money by buying DDR3.

Each of PCPartPicker’s public charts are for an 18-month period, though, and are more limited in what they reveal. We reached out to PCPartPicker seeking some longer-term numbers. PCPartPicker wasn’t able to share raw data, but did agree to generate some graphs for us. The below charts were generated for GamersNexus by PCPartPicker, and show a 5-year time period, spanning 2013 to 2018. We specifically requested this time period as it includes the 2013 SK Hynix factory fire.

The first graph tracks 2x4GB DDR3 1600MHz kits, like the one we bought in 2011. There’s been a clear cycle of rise and fall since at least early 2013, which is mildly reassuring in a big-picture sense. This graph includes the Hynix factory fire in September 2013, which caused a brief spike in prices, but it also reveals that there was already an upward trend that seems to have regained stability after October of that year. Prices were painful until DDR4 was introduced in September 2014, and that’s roughly where prices leveled-out and began to drop, but there doesn’t seem to be the overall downward trend in price that you might expect from old tech. In 2014, we predicted mass adoption and switchover from DDR3 to DDR4 for 2016, which largely came to be; however, the above is a graph of prices, not sales numbers.

A Nightmare for DDR4

The second graph is of 2x4GB DDR4 kits, which don’t have the benefit of DDR3’s long sales history. DDR4 was only sold beginning in 2014, and there were relatively few kits available for tracking, so the price average fluctuates more sharply towards the start with smaller sample sizes. Taken in isolation, this looks like a nightmare: 2x4GB DDR4 kits cost almost as much now as they did when they were first introduced, with no indication of leveling out. When lined-up with the previous DDR3 chart, though, the prices are clearly following the same cycle.

The problem with DRAM prices isn’t simply dollars-per-GB, although that’s part of it. In an ideal world, the price per GB of memory would decrease at the same rate that desired capacity increased, so that a run-of-the-mill memory kit would always cost the same amount. As price has fluctuated, it seems like desired capacity has increased steadily: in 2009, Lifehacker was posting articles about whether or not 4GB of memory was really necessary, and only six years later they were debating the same thing with 16GB (albeit with a different conclusion). The thing customers are really complaining about is the price of a “reasonable amount” of memory, which is subjective and harder to track.

As everyone knows, high demand and low supply makes prices rise. We’re not market analysts, but we have researched and can speculate about some factors that have nudged the current pattern along.

Limited manufacturers: In 2018, the only remaining manufacturers producing any significant amount of DRAM chips are Samsung, SK Hynix, and Micron, with Samsung providing the lion’s share: 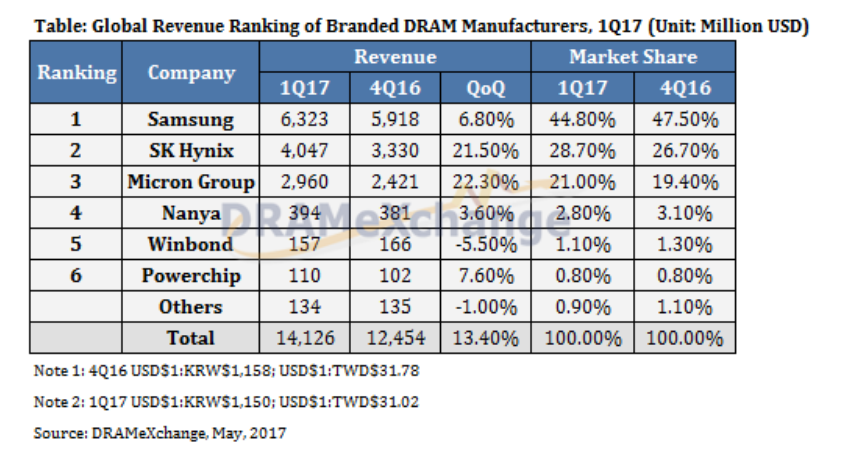 (Above: DRAMeXchange reports Samsung holding 44.8% of 1Q17 marketshare, versus 28.7% for SK Hynix and 21% for Micron. Nanya most commonly provides DRAM cache modules for SSDs.)

Consolidation has made the market more stable, but it’s also made price-fixing potentially easier. The stock prices of the two smaller companies, Micron and SK Hynix, over the past five years line-up nicely with the DRAM price charts previously shown, so there is a real trend of supply and demand at work--it’s not arbitrary. 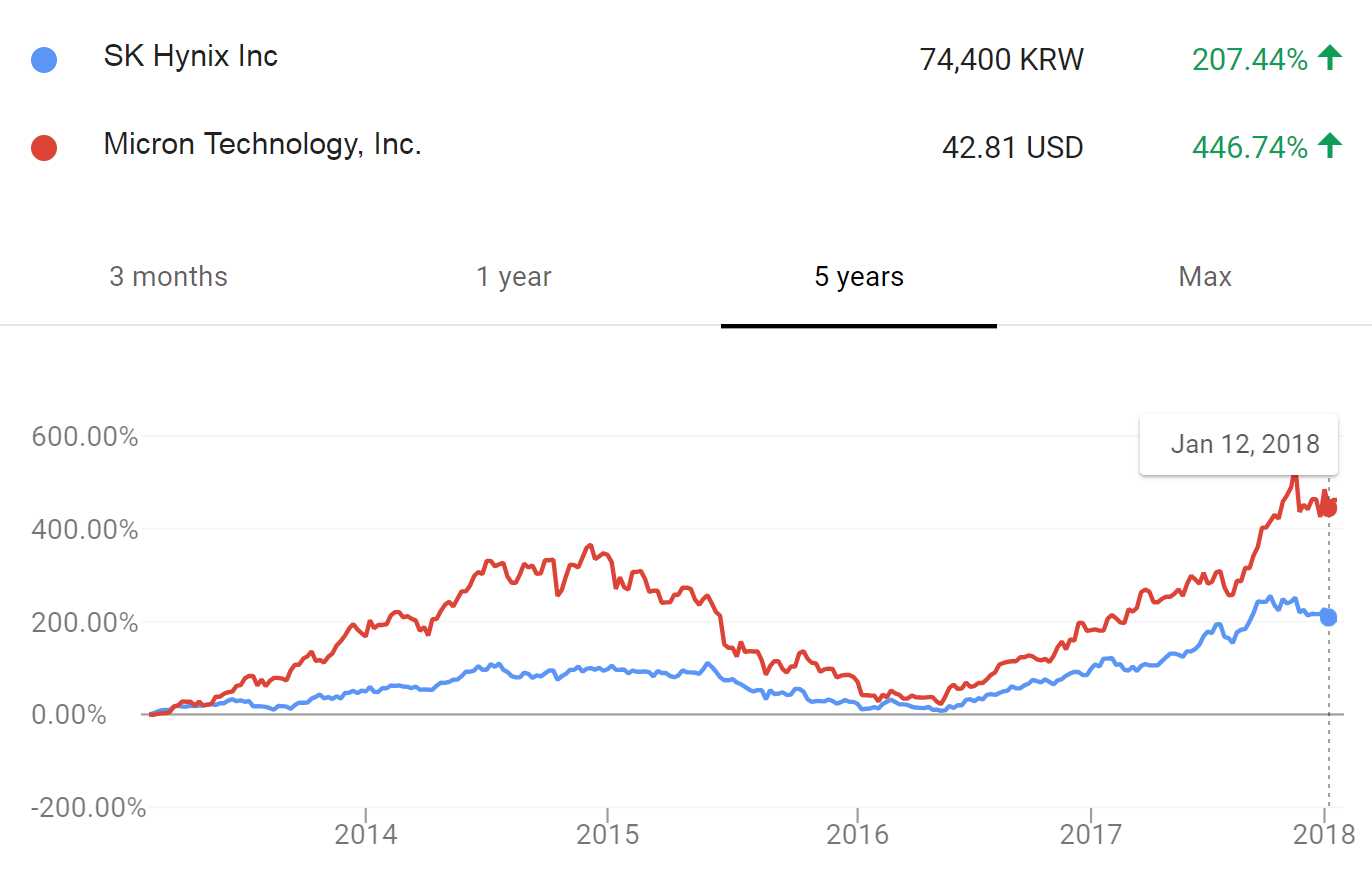 Price fixing: Price fixing is when manufacturers intentionally conspire to keep prices high, rather than competing in a way that benefits consumers. The terms “price fixing” and “price gouging” both have legal definitions and should be used carefully. We’ve reported recently about the Chinese government’s investigations into allegations of DRAM price fixing, something that has happened before: Samsung had to pay out $300 million because of it in 2005, and then another $110 million in 2014, alongside Micron, Hynix, Infineon, NEC, and Toshiba, totaling of $310 million. The catch is that the fixing in question occurred years earlier, between 1998 and 2002, and the only tangible result for consumers was a payout of a few dollars apiece. The fines are low enough that the alleged crimes may well justify anti-competitive actions.

Production: Production ramps-up when demand is high, which increases supply to sate demand, which ramps-down production, which reduces supply, et cetera. The need to construct new fabs or switch to a smaller process is a constant uphill battle. Switching fabrication technology or changing lithography can reduce the ability to supply existing, popular DRAM modules in the same capacity as previously. Multiple companies simultaneously updating for new fabrication processes would have an impact on DRAM supply and, therefore, its price. This kind of thing can be disrupted, for example, by a bunch of Bitcoin miners driving GPU demand up without giving manufacturers the confidence to increase production.

Disasters: This hasn’t been a problem lately, but in September of 2013, a fire at SK Hynix’s factory caused an immediate jump in DRAM prices and a dip in Hynix stock. The changes were huge at the time, summarized well by this bleak ExtremeTech report, but they corrected within a few months. It is possible for natural disasters to have more significant and widespread effect, as the floods in Thailand proved with the HDD industry.

Mining: GDDR5 memory prices have skyrocketed. As you’ll hear in our upcoming GPU price investigation, GamersNexus has been told by board partners that the price of GDDR5 memory, directly sourced, has gone up by $20-$30 for the average 8GB GPU. Typical price fluctuations are closer to $5, from what GamersNexus was told. Just like CPUs, GPUs need memory, and it all comes from the same three suppliers: Samsung, Micron, and SK Hynix. Every one of those GPUs has, probably, 4-8GB of memory on it, and those count toward the rising GDDR5 prices, which also inflate DRAM prices. The same fabs make all the components, splitting fab time between more devices.

SSDs: SSDs have increased in adoption for desktops, but more importantly, nearly every laptop now ships with SSDs for primary storage. Apple has completely switched over to SSDs, or nearly completely, and other mainstream notebooks in affordable price classes are now using 128-512GB SSDs as the baseline component. These, like GPUs, use components that come off the same production lines.

Specs: The official minimum for Windows 10 is only 2GB of RAM, but minimum specs for new software and games obviously increase over time. That doesn’t explain the current prices outright, but along with the arrival of DDR4, it does explain why anyone bothers to buy new RAM at all. DDR3 sticks aren’t compatible with modern motherboards or CPUs, which creates demand for new memory -- whether customers want it or not. With DDR3, one could reliably transition between architectures and reuse memory, which is a luxury lost in the past few years.

Mobile devices: Smartphones don’t individually carry much memory, but they make up for it in sheer quantity. Samsung’s Galaxy S4 launched with 2GB of RAM in August 2013, and within six months had sold 40 million units. The iPhone 6 and 6+ launched a year later and have sold more than 220 million units combined. In the first quarter of 2017, 380 million smartphones were sold. 1Q17 PC sales were 62.2 million, and DIY PCs are still a tiny minority compared to the prebuilt market. The number of devices that require memory (servers) or divert manufacturing capacity away from DDR4 sticks entirely (smartphones) is rising even as the PC market declines (excluding gaming PCs).

Again, we’re not here to make market predictions -- we don’t have a crystal ball -- but the longish-term graphs provided by PCPartPicker make the current DRAM price debacle seem like a (large) peak in a normal cycle. If things shake out the way they did in 2013 and 2014, 2018 will be a year of steady prices, followed by a decline in 2019. Hynix and Micron stock has loosely correlated with the price of DRAM over the past few years, and keeping an eye out for them in financial news should give a general idea of where prices are headed. It’s always possible that the bottom will fall out of the market and end the boom early, but RAM sticks probably aren’t going to become much cheaper this year.