AMD was clear from the beginning of today’s Capsaicin and Cream event that it was not a Vega product launch (the only 100% new Vega news was that the GPU would be officially branded “Vega”), but demos of the previously mentioned technologies like high-bandwidth cache controller and rapid-packed math were shown.

After some brief discussion about exactly how much alcohol was consumed at last year’s afterparty, the Vega portion of the presentation covered three major points: HB Cache Controller, Rapid Packed Math, and Virtualization.

“Virtualization” in this context means the continued effort (by both AMD and NVIDIA) to make server-side gaming viable. AMD has partnered with LiquidSky and will be using Vega’s “Radeon Virtualized Encode” feature to make streaming games (hopefully) as latency-free as possible, though limitations on internet service still abound.

The HBCC feature was described in layman’s terms as a way of utilizing 100% of what a customer pays for VRAM, which in turn makes up a significant portion of a graphics card’s cost. AMD claims that even AAA titles often use only 25-50% of the resources available “on a good day,” and HBCC will change that. Mankind Divided was used for the (recorded) demo with some impressive-sounding percent gains mentioned, but there continues to be a lack of hard specs.

Rapid-packed math was shown effectively doubling the amount of hair strands ­that could be rendered per second. This is done with precision switching, where Vega is able to push FP16 rather than FP32 for reduced precision and increased speed. Precision switching isn’t deployable in every aspect of gaming – you’d have potential errors in data presentation – but it’s a fine use case for hair rendering. Hair doesn’t need to be precise, particularly with strands numbering in the tens of thousands. AMD mentioned that RPM has already been used in consoles and high-end compute GPUs, but that they were attempting to bring this feature into the PC gaming world. We continue to be dubious about gaming applications—AMD can develop the technology, but it’s up to software developers to actually make use of it.

The demo which offered the most visible statistics of the presentation was a Sniper Elite benchmark running on dual RX 480s, showcasing improved multi-GPU support for DX12 and Vulkan. We’ve actually tested CrossFire RX 480s in the past, and our conclusion was the same then as it almost always is for multi-GPU setups: although performance can nearly double sometimes, it’s often the same or significantly worse. Improved support is great, but it’s got a long way to go before it makes buying two GPUs worth the price.

Other than Vega, there was quite a lot of focus on AMD’s VR efforts. Epic introduced Forward Rendering to Unreal Engine, which AMD has been working to support on its video cards. Forward Rendering is an Epic Games / UE technology that AMD has been suppoorting, and hopes to leverage the older rendering technique that enables greater framerates and the use of MSAA, both of which greatly benefit VR. 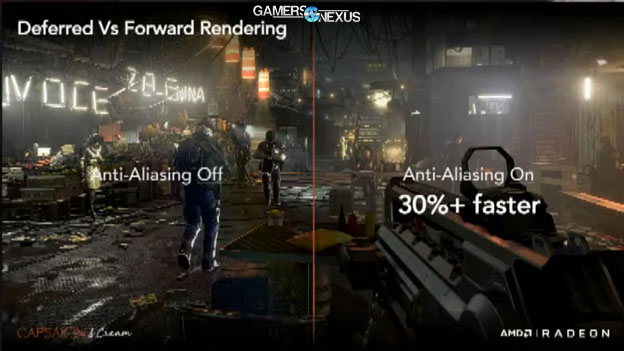 AMD is also working with HTC to support their Asynchronous Reprojection feature, a method of filling in the gaps to reduce perceived framerate drops. Asynchronous reprojection won’t actually increase the rate at which frames are rendered, but when a frame isn’t rendered in time, it will display an altered version of the previous frame rather than just freezing. This feature already exists, but AMD does not yet support it.

Check back for more coverage on Ryzen and nVidia news.