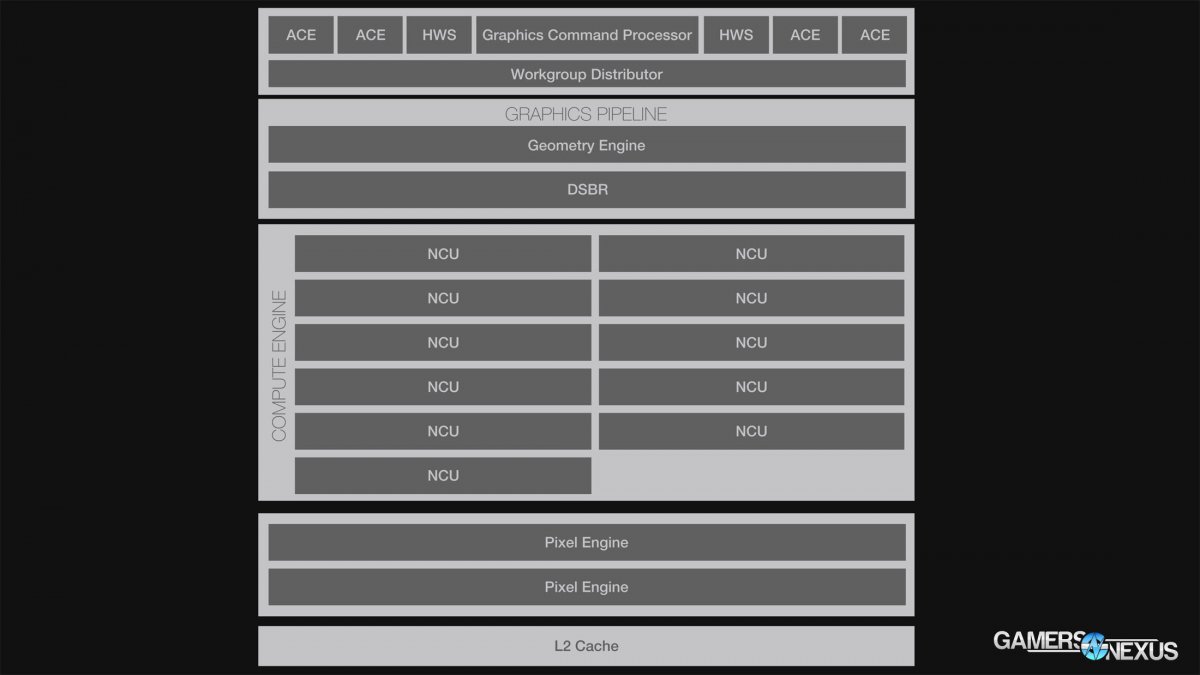 We’ll confirm all the APU specs and prices, then move on, as that’s about all that’s useful right now. Here’s a chart we made that contains everything: 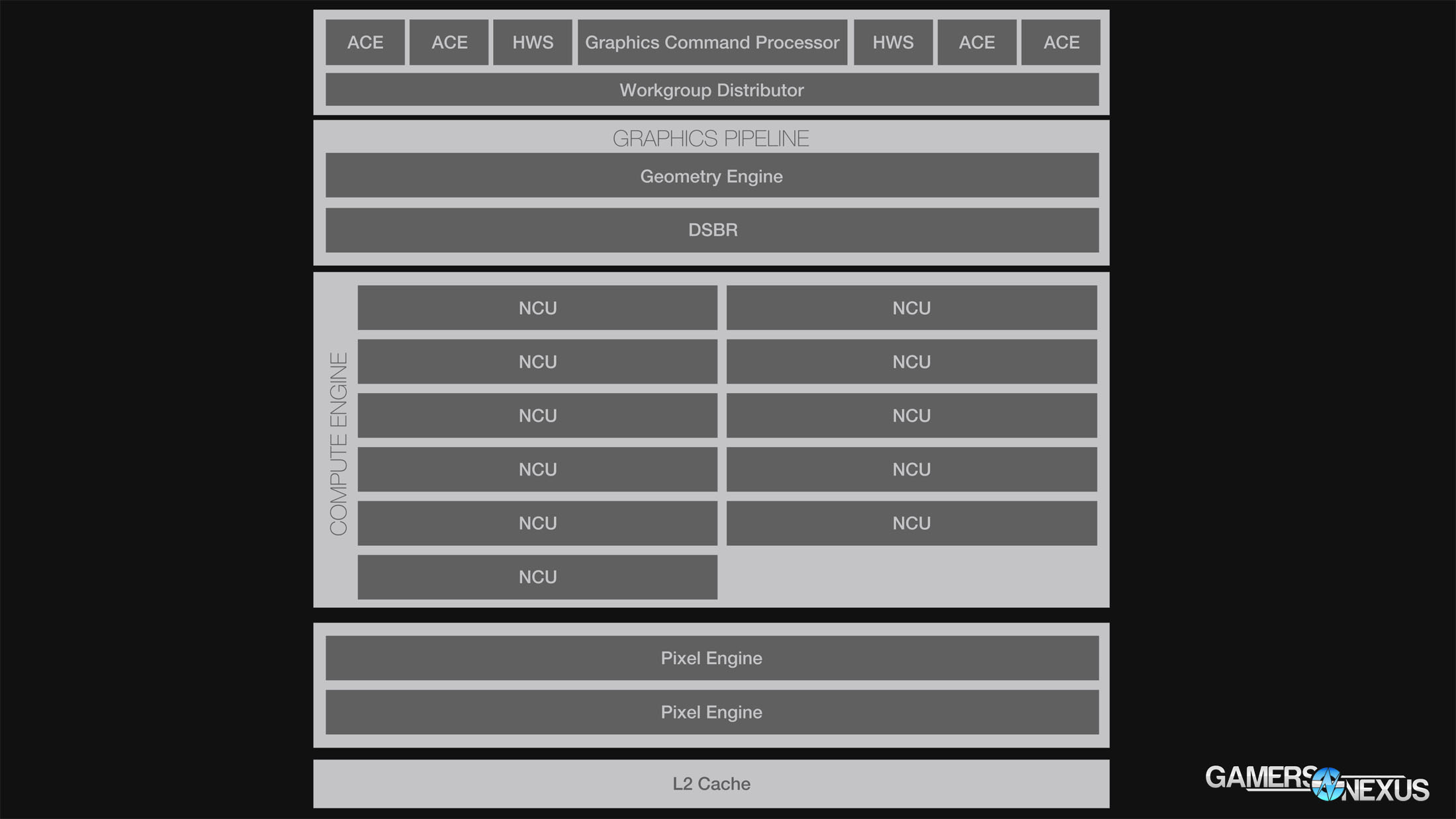 This block diagram shows the Vega 11 core that’s in the R5 2400G. The architecture overall should be familiar: AMD is still using its 4x ACEs, or Asynchronous Compute Engines, as would also be found in the RX 580 and Vega cards. The two hardware schedulers also remain present, marked as HWS. These were introduced in GCN Gen3, and started getting more use in Gen4. The HWS can be updated via microcode through drivers, so some level of firmware patching is possible. AMD’s graphic illustrates a single geometry engine and draw-stream binning rasterizer, which are accompanied by two pixel engines. There are 11 compute units present, as already known.

We’ve reviewed a lot of APUs in the past. Some have been a great deal, some have shown that you’d be better off buying a $70 GPU and $100 CPU – which would be something like a GT 1030 or RX 550 and a low-end R3 or G4560. We have samples coming in via side-channels and will benchmark performance versus low-end GPU combinations shortly.

Interestingly, the materials we’ve acquired do explicitly note that Windows 10 version 1709 is required to completely enable the APU. We also noticed that the APU has rid of the TCTL temperature offset, which means temperature reports will be true to reality.

We'll leave this section to the video.

Newegg today revoked its affiliate commission for video cards, which the company's sub-affiliate networks declare to be a change pursuant to "Bitcoin's unexpected popularity."

Of course, what they really mean is a rise in “cryptocurrency,” seeing as Bitcoin has been functionally unminable on GPUs for years now. Making this assumption still does not account for the GPU price increase, though; the price increase, as we've discussed on numerous occasions, is mostly resultant of GPU memory prices and GPU memory availability moving in inversely proportional directions. In recent interviews with manufacturers, we learned that 8GB of GDDR5 has increased in manufacturing cost, and has increased BOM, by $20-$30. From what we understand, GDDR5 price movements are typically on a scale of +/- $5, but the $20-$30 hike necessitated some vendors to officially raise GPU MSRP (not just third-party retail price, but actual MSRP).

This, we think, is the most likely actual contributor to the killing of Newegg's GPU affiliate commission. If Newegg is genuinely making an effort to keep prices at existing levels, then removing affiliate commission would assist in keeping margins profitable; however, if Newegg increases its prices to meet the new $20-$30 hike while simultaneously axing commission on VGA devices, then there's a clear attempt at increasing margins.

As we understand it, Newegg is attributing this commission change to "Bitcoin." While we don't doubt that Newegg has a far greater grasp on supply and demand of GPUs than we do, it is also disingenous to attribute this change entirely to Bitcoin. It's a mix of, as usual, keeping profit margins high and, to an equal extent, keeping prices closer to original MSRP. Newegg buys directly from AIB partners, not from distributors or others in the chain, so Newegg has a direct line to video cards. As we understand it, via major AIB partners, prices from board partners have not changed significantly outside of the $20-$30 bump from GPU MSRP.

Intel has finally begun the process of shipping stable microcode updates to address the recently revealed Meltdown and Spectre vulnerabilities.

In the days following the Google Project Zero announcement, Intel scrambled to release a software patch and there was widespread concern over possible performance hits. This was followed by reports of BIOS updates implementing Intel’s patch causing random reboots on Haswell and Broadwell, and then a ton of other platforms as well.

Intel reported that they found the root cause of this issue on January 22nd and requested that manufacturers halt distribution of affected BIOS updates. They’ve been working on solving it since then, and today reported that they are in the midst of distributing fixed patches to OEMs. They also mentioned that they’re continuing to beta test their updates with OEMs and partners before moving them to production, so hopefully there’s not a repeat of the previous round--although the “continue to” part could be read as saying that it was the OEMs who didn’t do enough testing last time. The second part of the news post is a plea to users to keep their systems up to date, which is a bit rich coming only a couple weeks after the bugged update, but is still good advice.

High-wattage power supplies targeting cryptocurrency miners are being advertised with knockoff 80 Plus certifications. A search for “bitcoin power supply” on Aliexpress, a site that sells direct from Chinese retailers, reveals dozens of PSUs branded as 90 or 95 Plus Gold. “80 Plus” is the name of an organization, and there is no such thing as 90 Plus. Even if these PSUs were 90% or more efficient, they’d be branded 80 Plus Platinum or Titanium, not Gold. Many of the supplies are also stamped with a Bitcoin symbol, despite GPU mining bitcoins at home being a thing of the past.

Backblaze has been tracking failure rates among their massive pool of hard drives since 2013, and earlier this month released their report for Q4 2017. The most impressive numbers were for HGST and Hitachi 4TB drives, which had less than 1% failure rates in 2015, 2016, and 2017. Failures were relatively high with some Seagate drives, and one 4TB model in particular failed at a rate of about 3% annually. Backblaze has replaced 6,795 failed hard drives since they began logging in 2013, and 1,508 of those were in 2017.

FSP’s Hydro PTM+ 1200W/1400W power supply will be available for purchase soon. The supply is outfitted with Aura Sync compatible RGB LEDs, and of course a liquid cooling block. It’s rated 80 Plus Platinum efficient at 1200W cooled by the built-in fan, but the liquid cooling theoretically raises the limit to 1400W. The price tag is $700, several times what two high-quality 700W supplies would cost, or roughly equivalent to what two air-cooled 1200W 80 Plus Platinum supplies would cost. The first 500 buyers will also receive an “AIO” pump, radiator, and fan assembly from Bitspower and sleeved cables. It’s open loop, so it’s not AIO in the same sense that we usually use the phrase. Putting an open-loop liquid cooling block inside a box of electricity is controversial enough to draw attention, but whether any Aura-Sync-using PC gamer draws 1200W+ for long enough to make it necessary is another question.