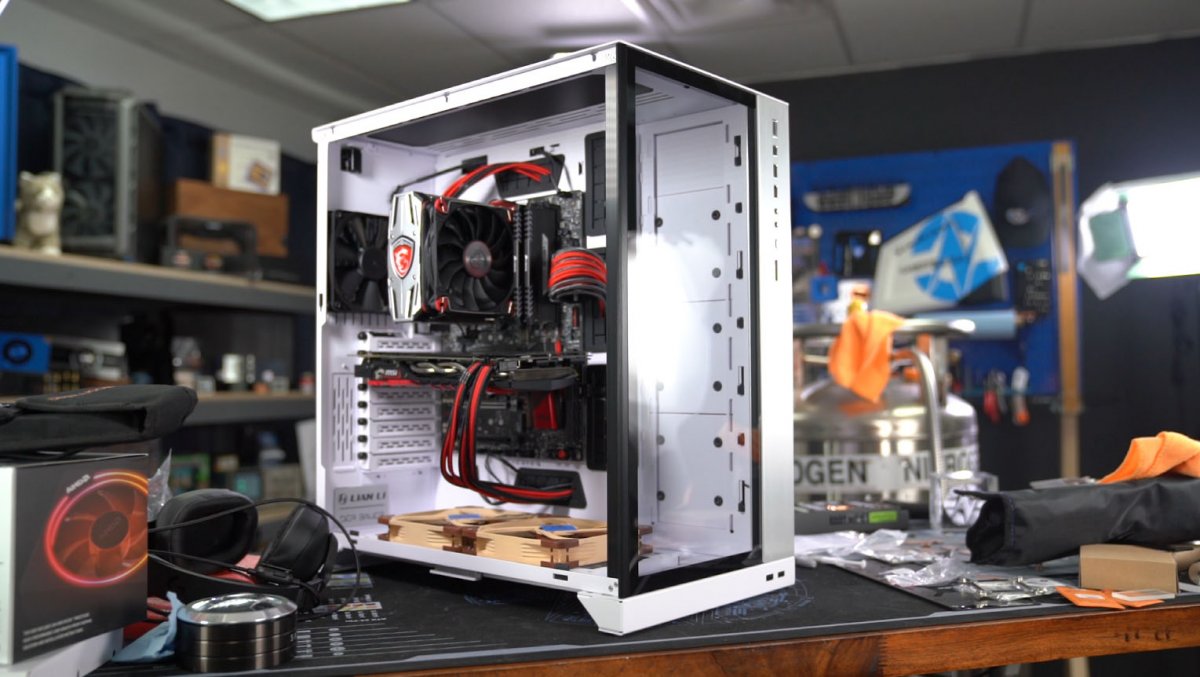 AMD's been in the news a lot this week, but for various reasons. One of the bigger stories was that of the Threadripper 3990X and its compatibility with various Windows versions, like Windows 10 Pro versus Windows 10 Enterprise. AMD has officially responded to some of those concerns, all discussed in our news recap today. AMD was also in the news for Google's adoption of more Epyc CPUs. Accompanying AMD, Samsung makes the news for advancements in its EUV fabs for 7nm and 6nm products, and Phanteks makes the rounds for its blatant rip-off of the Lian Li O11 Dynamic.

We announced this shirt in our Fractal Define 7 review and expected maybe 30 to sell, but all 200 of our initial order were gone within 12 hours. This shirt was designed with 100% of the profit going to Adelaide Koala & Wildlife Hospital in Australia, which is dedicated to rehabilitation and rescue of animals in the area. Koalas aren’t the only animal they rescue.

We were worried about ending up stuck with overstock on this shirt and never expected this design to be our fastest-selling design ever. It’s got a motherboard, RAM, GPUs, CPU, power supplies, and other components banding together around Australia, and the back of the shirt has a limited run of the GamersNexus logo with a koala and some eucalyptus plants.

It was so fast that our Australian viewers were asleep when we launched it, and I got a lot of messages of people sad they never got a chance to order. Since this benefits charity, I don’t think any initial purchasers will be upset that the design will become slightly less limited. We’re going to open up back-orders for more of these through midday Monday, so about 12PM EST Monday, to give everyone a chance to get an order in.

Anyone ordering while it’s on back-order will have their entire order, including in-stock items, held until about March 6, which is when we expect the production to finish. We have to do this since splitting orders would cost us the shipping difference to ship two packages, and since we don’t profit on the shirt, we have to do that.

As a reminder from last week’s episode, we’ll be in Taiwan for another factory tour series from March 5 to March 19. We wanted to give you a heads-up on what’s coming so that you can plan to check in on the videos. Cost for these trips balloons high, so we just want to make sure everyone’s got it on their calendar to check out our new tour for how computer hardware gets made. Currently, we have a challenge planned in a local tech market for me versus Patrick, which should be a lot of fun, and we also have plans to visit a PSU factory, an aluminum extrusion factory, electric chisel factory, and we’re working on touring an open-loop cooling parts manufacturer. We’ve also got some plans to visit XOC labs.

AMD’s Threadripper 3990X came with more than a few interesting surprises, one being discovered by AnandTech. In reviewing the TR 3990X, AnandTech found that, at least in their testing environment, the 64C/128T chip performed stronger on Windows 10 Enterprise than it did on Windows 10 Pro.

This led sister site Tom’s Hardware to do a bit of investigative work. “We've spent some time re-testing our Threadripper 3990X with a direct update from Windows 10 Pro to the Enterprise version and noticed little to no performance improvement outside of the expected standard deviation we experience with our benchmarks,” says Paul Alcorn with Tom’s Hardware.

Tom’s Hardware also reached out to AMD, and received the following statement in return.

"AMD officially recommends Windows 10 Professional or Linux for the AMD Ryzen Threadripper 3990X. Higher editions/versions of Windows 10 confer no additional performance or compatibility benefits to the processor. We understand that this suggestion has been made in the media, but we believe this to be an error in testing that our team is presently diagnosing.”

AnandTech stands by its testing, and also states that Phoronix has verified their findings as well. It seems that at least one theory for the supposed performance advantage is the way in which the Windows scheduler addresses the cores and threads. Windows 10 Pro groups the first 64 threads into one group, and anything beyond that into another group. These are known as NUMA nodes, and the way in which Windows and the Windows scheduler optimizes nodes can vary.

Windows 10 Pro supports 128 threads, while Windows 10 Enterprise supports 256. It seems that the Workstation and Enterprise versions of Windows 10 may simply be better suited to or have NUMA specific enhancements for handling extremely high-core count chips.

Phanteks has a long and storied history involving burning NZXT that we’ll one day tell, but for now, it seems that Phanteks has set its sites on Lian Li instead. Under its sub-brand MetallicGear, which apparently was created because Phanteks doesn’t want to dirty its main brand with knockoff hardware, the company announced its new NEO “QUBE” case. The NEO Qube looks like something you’d find in a Shanzhai knock-off marketplace and is functionally a direct design copy of the O11 series cases. It’s disappointing to see. At least Antec moved the PSU to the top of the case, but MetallicGear is copying all of it. It’s true that there are only so many ways to design a case, but there’s no need to copy it part-for-part. It’s dual-chamber, it’s got the same fan positioning, similar motherboard tray.

We’re extremely disappointed to see this from Phanteks. The company had a questionable start, treated media poorly when criticized, then rectified much of its image by releasing actually good products like the P400A. Now, Phanteks is turning back toward the slimier side of its brand. They’ve proven capable case designers. Commit to it and make something better than the O11, not literally just the O11.

Last December, we mentioned that the sole remaining prototype for the “NES-Playstation” was to be auctioned off this March. However, it seems Heritage Auctions decided to kick things off early, as the auction has already gone live, and will remain so until March 6th or 7th. The current bid (at the time of this writing) is $300,000.

The owner, Terry Diebold, has reportedly already turned down at least $1.2M for the prototype. The auction has only been accepting bids for a handful of days, and with 14 days left to go, it may yet exceed that rumored $1.2M figure.

Epyc has been something of a slow burn, but AMD continues to notch victories where it counts. If AMD intends to make good on its commitment for double-digit server share this year, getting major cloud deployers like Google to increase their Epyc-based instances in the cloud is a good way.

While neither AMD or Google officially disclosed what SKUs are being used for the new VMs, we know they are based on AMD’s 2nd-gen Epyc Rome. Per AMD’s press release, the new N2D offers up to 128 and 224 vCPUs aimed at both general purpose workloads and high-performance workloads.

In a statement by AMD’s Forrest Norrod, it seems to be suggested that Google’s Epyc adoption will continue into the future.

“AMD and Google have worked together closely on these initial VMs to help ensure Google Cloud customers have a high-performance and cost-effective experience across a variety of workloads, and we will continue to work together to provide that experience this year and beyond.”

Many buyers of ASUS’ ROG Strix RX 5700 XT have been reporting runaway temperatures with the card.

It seems that the culprit was a poorly tightened back plate, via some miscommunications between AMD and its partners. ASUS seems to suggest that AMD’s guidelines are to blame.

“Initial batches of ROG Strix RX 5700-series graphics cards were torqued to 30-40 PSI based on AMD’s baseline recommendations. While those guidelines provided leeway to apply more torque, we took a cautious approach because were dealing with a new 7nm GPU and didn’t want to risk damage to the die. After receiving user reports regarding temperature issues, we performed extended R&D testing to find the optimal PSI range for our graphics cards without compromising GPU reliability,” says ASUS.

ASUS went on to say that it found the optimal torque range for the backplate screws is 50 and 70 PSI, (per PCWorld) and that future cards would ship with new screws torqued to 50-60 PSI. ASUS is also telling its customers to get in touch with the company to receive the upgrade for free, starting next month.

Users were reporting that tightening the screws and/or adding washers seemed to correct the issue, so here’s hoping that ASUS has a handle on the problem.

Samsung has announced its first line dedicated to EUV production, the newly minted V1 line at its facility in Hwaseong, Korea.

Samsung broke ground on the new fab back in February of 2018, with initial wafer testing starting in second half of 2019. The first products out of the fab will be delivered to customers during Q120. Samsung also notes that the total investment in the V1 fab will total $6B by the end of 2020, as Samsung continues to execute on its plan of address the 7nm and ever shrinking nodes.

The V1 line is currently producing chips based on Samsung’s 7LPP and 6LPP technology, and Samsung expects the line will be scaled to produce as small as 3nm chips. With the new V1 line, Samsung’s 7nm EUV capacity is expected to triple that of 2019.

There are lots of unsung computing heros out there, and in a world where unimaginably wealthy tech giants seem to get all the credit, we like to point out the lesser known engineers and computer scientists that have paved the way for things we take for granted today.

cut/copy/paste was born out of Tesler’s desire for simpler editing with a keyboard and mouse -- something that wasn’t prevalent in the 1970s. Tesler was also a proponent of what was known as “modeless” computing, meaning that software or a user interface is always in an editable mode. Users aren’t required to enter a command (like certain keypresses/combinations) to enter an editing mode. Tesler built cut/copy/paste functionality into one of the first word processors, Gypsy, while working at Xerox PARC.

Tesler’s work also extends to Apple, where he’s credited with introducing the company to the idea of GUIs with the Apple Lisa. He’s also credited with helping Amazon and Yahoo with overhauling their UI. Tesler was also an early believer in the ARM platform, as he managed to convince Apple to invest in the company long before Apple would put the chips in its iPhones.

Motherboard may have said it best in describing Tesler.

“Perhaps Larry Tesler, whose last big Silicon Valley job was at the DNA-testing firm 23andMe in the late 2000s, never became as big a deal as Bill Gates, Steve Jobs, Jeff Bezos, or Larry Page. But he was often in the same rooms as all of those guys. And he played just as important a role in modern technology as any of those figures.”

Tesler passed away recently at the age of 74, but “copypasta” will live forever.