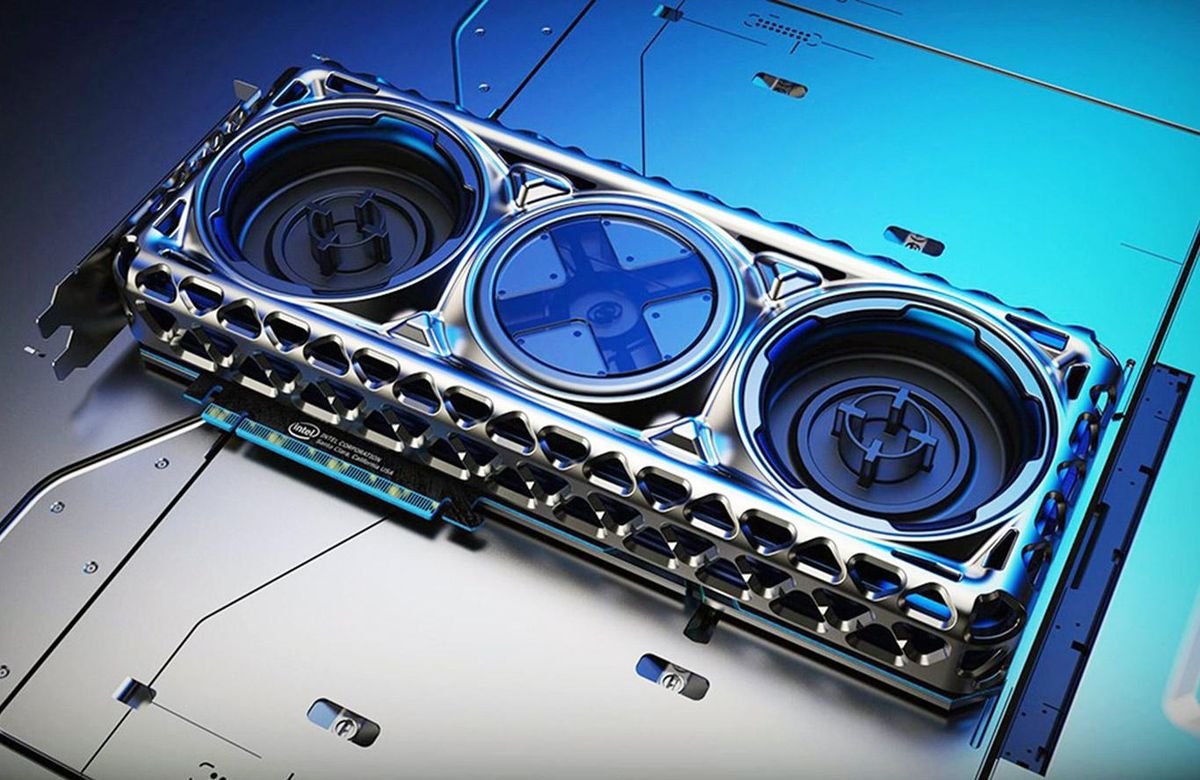 We'll leave this one for the video above!

We recently ran a donation drive where we contributed a portion of store sales to Eden Reforestation Projects. We talk more about this in the video, but the quick update is that, thanks to store purchases from our viewers and thanks to a generous contribution from our distributor, we were able to donate $7,250 to Eden Reforestation Projects. The group creates long-term sustainable jobs in impoverished, deforested regions, supporting the local economies, the people who live there (with jobs and resources), and habitat and wildlife. By Eden's estimates, this is roughly 72,000 trees.

According to a recent rumor initially published by VideoCardz, Intel is working to get a pre-binned i9-12900KS SKU out the door, likely in early attempt to head-off AMD’s upcoming slate of new Ryzen parts, which AMD have claimed will offer a 15% improvement in gaming performance thanks in part to a larger L3 cache and 3D stacking.

If such a part exists, it’s a good bet we’ll see it at CES 2022, along with Intel’s upcoming non-K SKUs for Alder Lake-S.

According to hardware leaker Kopite7kimi, who has a particularly good record with Nvidia’s Ampere-related products, Nvidia is prepping the long-rumored RTX 3050 to ship in the form of two separate SKUs: A 4GB model and an 8GB model. Additionally, Nvidia will allegedly further segment the SKUs on the basis of CUDA cores on the die, as well as possibly GDDR6 memory speed.

Once upon a time, rumors claimed that Nvidia would be utilizing its GA107 silicon for the RTX 3050, though according to the leak, that appears to have changed. Instead, Nvidia is now prepared to use GA106 silicon, which is already found in Nvidia’s RTX 3060. Using the GA106 GPU is a likely scenario, as Nvidia would presumably be recycling dies that didn’t make the cut for its upper-shelf cards.

Rumors currently have the RTX 3050 set for a CES 2022 unveiling, and a possible late January 2022 launch. We won’t have to wait long to see if these leaks and rumors go anywhere.

In other NVIDIA news, the company recently launched a new RTX 2050 GPU -- and it’s not even running Turing architecture from the 20 series. Instead, the new RTX 2050 is a laptop GPU with an Ampere (30-series) architecture. Also, although NVIDIA technically announced the RTX 2050, MXM boards and laptops won’t be available until Spring of 2022.

It’s technically RTX and technically Ampere, but there’s not a lot of power in this model. The “20” naming is maybe suitable and is certainly better than calling it “RTX 3050 64” or something otherwise confusing for end users.

Intel seems to have published a beta driver for its 11th-gen NUC Kit that mentioned support for several yet-to-be announced products and architectures. While the beta driver was seemingly left on Intel’s website for several days, it doesn’t appear to be available anymore. The beta/test driver provided new DCH graphics drivers for 11th-gen NUC Kits on Windows 10 and Windows 11.

Most notably, however, was the mention of support for several GPU and CPU architectures, some as far out as 2025. And while many of these have been rumored, very few have been made official by Intel. These include Intel’s DG3 GPUs, carrying the codename “Elasti,” and are rumored to be based on Intel’s Battlemage architecture. Additionally, there’s mention of several unreleased Arc GPUs, such as Arc A380, Arc A350, Arc A370M, Arc A350M, and Iris Xe A200M.

The driver notes also list several unannounced CPU platforms, like Raptor Lake (widely believed to be the successor to Alder Lake in 2022), Meteor Lake (based on the Intel 4 process and expected in 2023), Arrow Lake, and Lunar Lake (roughly 2024, after Meteor Lake). Also, the driver suggests that Intel is planning to double and quadruple the GPU core count of its iGPUs over the next few years, compared to what we’re seeing now with Alder Lake. The driver notes show Meteor Lake calling for a 3x4x16 (192 EUs) configuration, while Arrow Lake will supposedly support a 6x4x16 (384 EUs) configuration.

A full year after launch, Sony is now finally offering colored faceplates/covers for its PS5 console. The news comes just a few weeks after a patent by Sony was spotted, suggesting that Sony’s custom faceplates were indeed imminent. The colored faceplates will of course include the highly requested black (Midnight Black), but will also include “Cosmic Red, Nova Pink, Starlight Blue, and Galactic Purple,” per Sony’s blog post.

All this, of course, comes after Sony released its legal hounds on a number of third parties selling compatible PS5 faceplates, most notably from Dbrand and its line of PS5 Darkplates. While Dbrand did eventually succumb to a cease and desist from Sony, the company wasted no time in launching its new Darkplate 2.0 designs.

According to a press release from CD Projekt Red, the embattled developer is preparing to settle a class action lawsuit brought against it by investors last year. The lawsuit in question was filed in US Courts last year, and is being handled by Rosen Law Firm, who deal exclusively in shareholder and investor litigation.

In its press release, CD Projekt disclosed that the settlement terms would include a rather paltry $1.85M settlement. We use the term paltry only in relation to other financial figures of note for CD Projekt as of late; despite Cyberpunk 2077’s abysmal launch state, the game quickly recovered its estimated $316M budget and more through pre-orders alone, and the game has still sold at least 13.7M copies as of 2020. CD Projekt even spent $2.2M on refunds, itself a larger figure than the $1.85M settlement.

The company noted in its release that there were several factors influencing its settlement negotiation terms. We’ll put some of those on screen:

“The duration and costs related to further legal proceedings in the U.S., which might arise irrespective of the Court’s findings; (acceptance of the key provisions of the settlement agreement by the Company’s insurer; opinion expressed by the U.S. law firm representing the Company and the other defendants named in the case recommending acceptance of the agreement; the general practice in the U.S. of concluding such litigation by way of an out-of-court settlement.”

In gearing up for CES 2022, Dell has shared one of its more interesting concepts in Concept Luna. Concept Luna is Dell’s take on the ever growing cry for more modular and sustainable products, and in this case, its laptops. To be clear, Dell isn’t breaking new ground here: Framework already has an in-market product that goes a long way in incorporating a modular  and repairable approach to laptops.

Rather, what Dell is showing off is more of a design philosophy and set of tenets it wishes to apply in the coming years, to hopefully curate a more repairable and sustainable product ecosystem. It’s a great look for the company, but Dell is a company that does a lot of talking.  You need only look at its history – and resultant lawsuit – with the Alienware Area-51M Rx series of laptops that were alleged to be upgradable.

Dell collaborated with Intel for a working prototype that checks a lot of repair boxes: The design eschews any kind of adhesive, it tones down the use of screws and solder, and features a design intended to afford more granular control over repairs, like replacing a screen – something that used to be a death knell for a laptop. Dell also mentions the idea of harvesting parts from older systems and recycling them into newer ones, and selling them at a lower cost. Dell goes on to mention laptops sharing a universal chassis and form factors, making part interchangeability between them easier.

But again, these are all just ideas and concepts, and Dell isn’t actually shipping any hardware like this any time soon. The company claims that these types of concepts will inform future design choices and help the company move towards addressing e-waste and climate change goals, but again, Dell’s track record isn’t exactly stellar. We have more than a little bit of skepticism about what Dell may or may not achieve with Luna, but time will tell.

MSI has taken the wraps off of its much-hyped MEG Z690 Godlike motherboard, with an equally godlike price of $2,100. MSI has been teasing the new motherboard since at least October, but has finally decided to announce the board properly and hope someone can afford it. Defraying the cost a bit, the new flagship motherboard will also be bundled with an AIO liquid cooler (MSI’s own MEG CoreLiquid S360) and a Kingston Fury DDR5-6000 32GB kit.

The motherboard itself is actually of the E-ATX variety, meaning it actually won’t fit in any case MSI sells at the moment. The MEG Z690 Godlike also comes with a detachable IPS display measuring 3.5”, with a resolution of (480x800). The display can be used to show component temperature, clock speeds, and can also be used to make CPU adjustments. We also suspect you could get Doom running on it.

MSI only plans to sell the new MEG Z690 Godlike to customers who have previously bought and registered an existing Godlike motherboard, or one of MSI’s RTX 3080 or 3090 graphics cards. Assuming you and your wallet meet the requirements, you can expect the MEG Z690 Godlike towards the end of January, according to MSI.

In a surprise move, and one that’s a boon for repairability, Microsoft is working with iFixit to manufacture and sell OEM repair tools for its Surface devices. According to iFixit CEO Kyle Wiens, “iFixit Pro independent repairers, Microsoft Authorized Service Providers, Microsoft Experience Centers, and Microsoft Commercial customers can now purchase Microsoft service tools for Surface devices directly from iFixit.com.”

Initially, there will be three tools iFixit will be manufacturing for Microsoft: The Surface Display Bonding Frame, Surface Battery Cover, and the Surface Display Debonding Tool. The tools will all be offered with appropriate weights and accessories, according to iFixit. For now, these tools will only be available for the above-mentioned parties, though iFixit hopes to be able to offer the tools to the DIY community in the future.

Back in October, Nvidia eagerly announced its GeForce RTX 3080 tier for its cloud gaming subscription service, GeForce Now. At the time, however, it was only available for “pre-order,” meaning you had to effectively stand in line and wait for an opportunity to basically rent an RTX 3080 in the cloud.

Now, Nvidia has announced the service is widely available for $99/6 months or $200/year. As of this writing, there is no monthly option, and the math works out to $16.67/month. As a reminder, GeForce Now is a bring-your-own-games affair, allowing users to access an RTX 3080 server and login to existing digital storefronts such as Steam, Epic Games, GOG, etc. However, GeForce Now still only supports certain titles from those stores, so check the supported games list before you buy in.