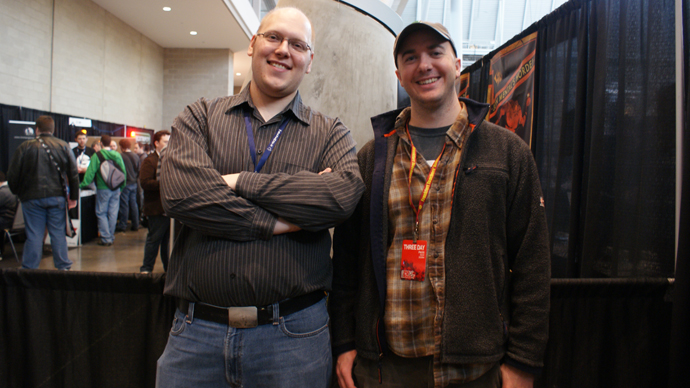 The garbled voices of some seventy-thousand attendees drowned out any echoes emitted from within PAX East's adeptly-concealed indie alley; no doubt that an unknown number of journalists had fallen victim to ravenous packs of indie developers in the alleyway -- sadly, in indie alley, no one can hear you scream. I shouldered my camera equipment and discreetly weaved through wave-after-wave of the arm-grabbing mongrels, eventually taking cover behind a nondescript pillar and equipping my cellphone. Incorrect.

"Are you Steve Burke?" Uh-oh. They must have seen my yellow ba-- wait a minute, these are the guys I scheduled an interview with! Whew. Safe for now.

For those of you that aren't aware, here's the preface to most interviews with large game developers or publishers at a convention: "We're going to interview over here. Is that good for you? We sure hope it is, because that's where we're going. Shirt?" Yes, the Portal 2 and Orcs Must Die! teams treated us fantastically; on the flipside of this more standardized approach, however, is the indie method: "Uhhh... so... how about that area? It doesn't smell and the floor isn't sticky."

Sounds good to me.

The Lunar Giant Studios team is equal parts humor, skill, and crazy. Their current claim-to-fame is Delve Deeper, an outrageous approach to turn-based mining operations within a board game-stylized setting, much akin to Munchkin (oh dang, that was awesome sounding). In essence, teams of dwarven miners are all competing to dig deepest, get the most valuable minerals, and return them to base; the team with the most points after a set number of rounds, or the team that achieves a pre-defined point limit first, is the victor. 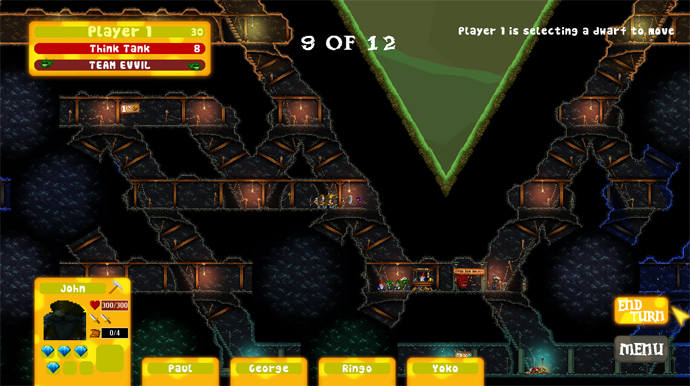 When asked about the target audience for their games, Jay "Poplicola" Margalus told me "if you've ever played Carcassonne, we're kind of going for that feeling." Indeed, when we gave it a shot at first launch, the game was filled with the most beautifully ripped-off comedy ever. From the very first second of the game you'll be shaking your head in shame, while simultaneously stifling a laugh that you know is inappropriate. An entire team of dwarves, for example, had A-Team references (the team was dubbed "The B-Team," with dwarves being named things like Mannibal, C.A., and Spaceman). It's completely insane.

Sticking with what works, the Lunar Giant guys are slated to soon be working on Delve Deeper 2: The Deepening. Yes, that is the real title. The team is planning to support user-generated content more heavily for the new game (you can currently upload your custom Delve Deeper maps here), and those plans include a possible scripting interface for Delve Deeper 2. Community is a large part of the continuation of any independent developer, and Lunar Giant Studios certainly understands that; they want to facilitate players to add-on to an already awesome game. Custom content and mods will propagate with rapidity (yes, I just used that word) thanks to the intended multiplayer and hotseat support for Delve Deeper 2, but the team is going to be creating just as many new modes as the players undoubtedly will.

Other than dwarves driven to madness by their creators, the team is working on a -- to quote them -- "funkadelic, kung-fu, fighting master type game" for the Android platform, currently priced at $1. Using a combination of 70's kung-fu movies and, uh, funk music (apparently the inspiration is Black Dynamite), Lunar Giant is stepping into the mobile arena with something that will definitely serve as an addictive time-passer. Touch of Death is a casual game that is targeted for release later this year.

Oh, in case you were wondering: yes, the name "Lunar Giant" is an anagram of Alan Turing, famous for the role he played in World War 2 cryptography. I know, I realized that when I first saw it, too.

We'll be checking in with these guys frequently, if for no other reason than to bask in the palpable humor emitted by each team member. If you want to check something out in the meantime, why not go look at Warp?