NVidia's GeForce GTX 650 Ti Boost was first revealed to us in one of the most straight-forward press events we've attended: It's running on the known GK106 platform, uses nVidia's Boost 1.0 tech (not available on the original 650s), and it wants to dominate AMD in the sub-$200 market. There was only a single question asked by the press corps—"is voltage user-controlled?"—and that was that. End of meeting. The answer was 'yes,' by the way.

We've historically recommended AMD for budget and entry-level PC builds. The 7850 has reigned king of our sub-$700 system guides for nearly a year, and before that, the 6850... and the 5000 series. The point is, AMD's always been good at cutting into their margins and designing inexpensive chips for gaming. NVidia wants to take that away from them.

In benchmarks across the web so far, we've seen the 650 Ti Boost exhibit lower frame latencies than AMD's similarly-costed 7850 and push equal or slightly higher framerates (discussed below), so in that regard, nVidia has established a foothold. The 650 Ti Boost has also been performing admirably in SLI when matched against even the 670, and that's what we're here to explore today.

This mid-range gaming PC build aims to use SLI and overclocking to amp-up your ability to play games on max settings, all while supporting high resolution displays (19x10 or high on 25x14).

The most noteworthy element of this build is easily its SLI angle. We don't regularly recommend SLI for builds that aren't targeted as production rigs or high-end, multi-monitor gaming machines -- but the times are changing. Games are finally moving toward more widespread support of multi-card arrays (including both SLI and CrossFire), and the Boost edition of the 650 Ti actually makes for a very cost-effective way to produce higher performance than a GTX 670. Take this benchmark from Fudzilla, for example.

The GeForce GTX 650 Ti Boost we selected is fitted with 2GB of RAM, making it the preferable of the two options for higher-resolution texture packs, a GK106 chip, and can boost up to 1072MHz. The unit can be overclocked using MSI Afterburner or other utilities, and if you're interested in that, we'd recommend checking out our introductory overclocking primer. There's not a ton of voltage control for this card, but the overall OC potential is good enough for any intermediate user to enjoy and toy with. Be responsible in your overclocking - not all chips are made equal.

Using the two cards in SLI won't double performance in a linear fashion, but will improve overall performance of games based primarily upon optimization within drivers and the target software. Crysis 3, for instance, takes advantage of SLI big-time and will give you massive performance advantages, but not every game is as heavily optimized as Crysis 3. SLI generally works by using either split-frame rendering or alternate frame rendering techniques to assemble frames and ship them to the display: with split-frame rendering, SLI enables the two GPUs to cut the work involved in rendering each frame in half, independently process that material, assemble the package on the master card, and ship it to the display; alternate frame rendering is, as the name implies, alternating -- the cards effectively process every other frame and ship them through the bridge/master card and to the display.

The RAM doesn't "stack" in SLI, so you won't have an effective 4GB of RAM by using 2x2GB cards (each card is independently processing), but the processing power does alleviate some of the load placed on the actual GPU by splitting the work required.

Sorry if I'm boring you with this choice, but being that this is a mid-to-upper-range build with overclocking intentions, we've opted for the 3570k. It's an easy choice, yes, but there's good reason for that: The chip performs well in gaming, overclocks easily, and runs fairly low TDP.

For the unfamiliar: Intel's K-SKU units (like the i5-3570k we've selected) have more multipliers unlocked than their non-k brethren. If you don't much care for overclocking and don't see yourself ever using it -- even out of curiosity or fun -- you can safely drop down to a non-K CPU (3450, 3470, 3570) and leave it stock. We tend to recommend overclocking as a fun activity for hardware enthusiasts, though. You get more power out of your chip in a relatively quick fashion, sometimes resulting in a large enough increase to eek out more FPS. I generally recommend dedicating 1-2 hours for research and guess/checking your settings, then leave it for an 8 hour torture/stability test.

If you do plan to overclock, we'd strongly encourage you to pick up one of the lower-costed aftermarket air coolers to extend the life of your chip and minimize thermals. Overclocking without an aftermarket unit will be limited by a thermal ceiling and could potentially cause permanent damage to your CPU. Here's our CPU cooler bench from a recent benchmark: 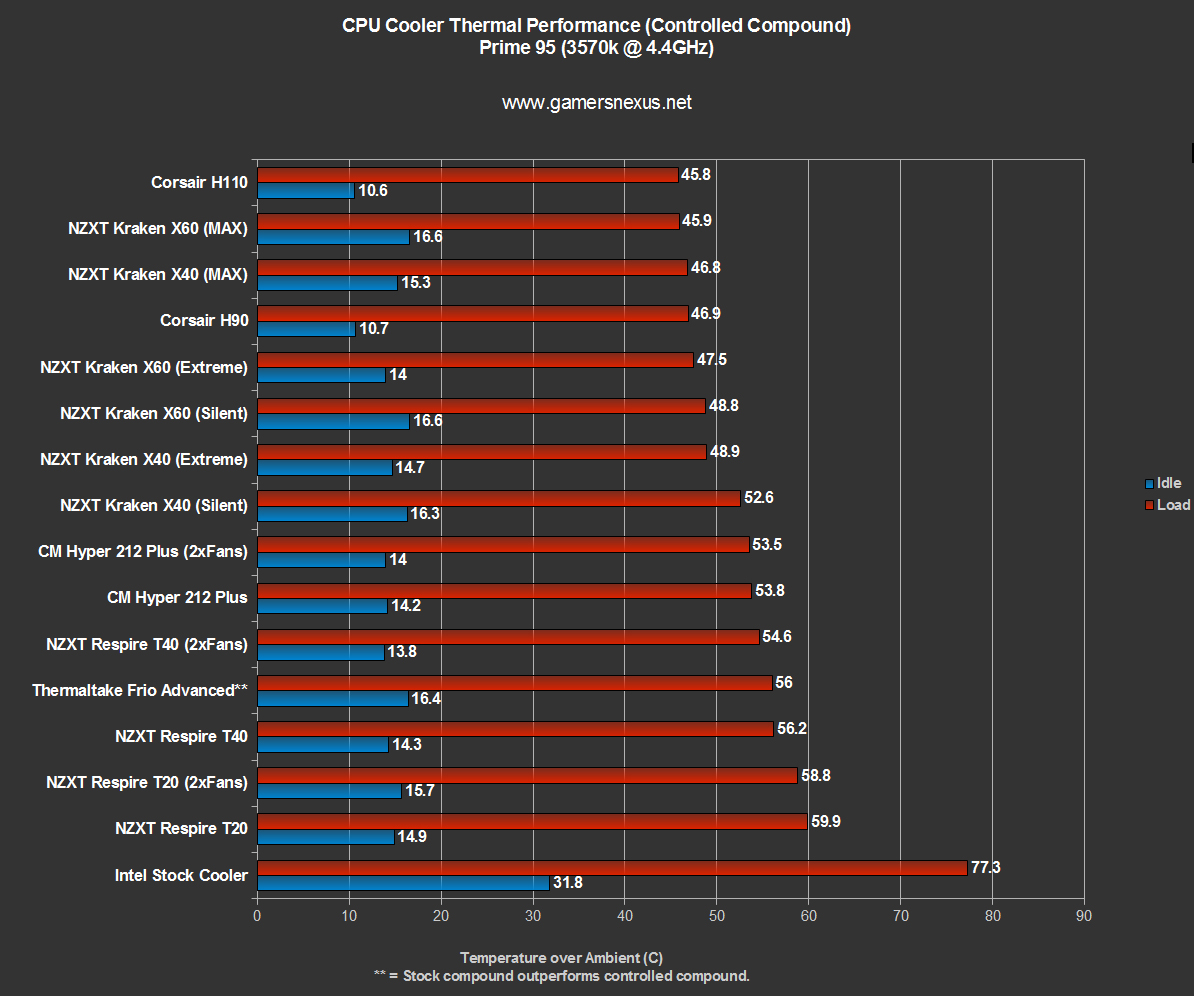 I personally prefer NZXT's Respire T40 in a dual-fan configuration, but even the stock T40 ran 21C cooler than our Intel stock unit in the test. That's a big difference in terms of the silicon's lifespan.

It's funny that our previous PC build discussed memory's trend toward decreased prices, because that seems to be now going the opposite direction. It's a rapidly-changing industry. At PAX East, a few of our key industry contacts on the memory-side of things stressed that Flash memory costs are going up (though at the time, none of us were sure if it'd impact the consumer). It makes sense - SSDs, GPUs, and RAM all rely heavily on a similar supply of memory, and with SSDs growing in popularity and other market fluctuations, RAM prices have now begun to climb.

Regardless, you still get 8GB for around $60-$70 right now, so it's not the apocalypse quite yet. We opted for Kingston's PC3-12800 speed HyperX memory, clocked natively at 1600MHz and easily upped to 1866MHz with a somewhat standard CL9 (cas latency).

MSI showed us their new "gaming" line of motherboards at PAX East, to include the successor to our test bed's GD65 and the G45 used herein, here's what that looks like: 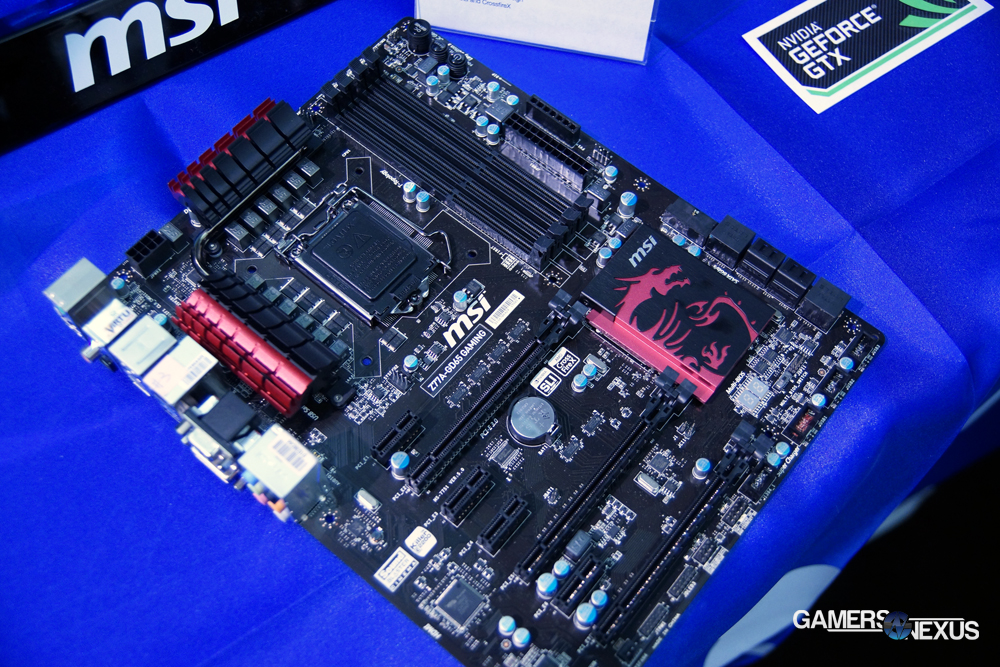 The GXX-Gaming series of boards are sort of cool -- they have dragon-shaped heatsinks, a dragon-encrusted bridge plate, and offer a Killer NIC (which, as we all know, is still bottlenecked primarily by your external connection). When asked about the Killer NIC at PAX East, our MSI contact informed us quite honestly that it'd make the biggest difference for users who might be throttling themselves with YouTube uploads or incoming streams whilst simultaneously gaming. If you're uploading a YouTube video (something that takes a good deal of bandwidth) but you'd still like to play your game, the Killer NIC will prioritize gaming tasks in the background and minimize your uplink speed. This slows down the upload significantly and dedicates more of your bandwidth to the game, theoretically ensuring that you're still able to compete and even make a dent in that file upload.

GRID 2 as a fantastic example of a real-world scenario where this happens, as the game will strongly encourage users to upload footage from their races while still enabling them to play the game.

Now, with that all stated, you'll notice we haven't selected the "Gaming" version of the MSI board for this build -- that's primarily due to cost and the specific requirements to take advantage of the upgraded NIC. If you see yourself streaming content (either outbound or inbound) while gaming, it may be worth upgrading to the G45-Gaming board. If you just want to play your games in peace, the regular G45 we selected is right for you.

The G45 will support a dual-card SLI configuration in x8/x8 speeds on the PCI-e slots, which is plenty of bandwidth for the cards we're using (they won't fully saturate x16). The board also has excellent heatsink design and uses a somewhat simplistic 6-phase power design, but is stable and reliable for our purposes. If you're looking for more extreme OC potential and want to push the chip closer to its hard voltage limits, MSI's GD65 is a step above the G45 in supplied hardware and uses a beefier 10+2-phase power design. We use the GD65 for our official test bench, but the G45 is enough for the majority of builders.

We've got a Corsair theme going on for our power and cooling configuration in this build, it seems. Corsair's CX-750W PSU offers ample power for our SLI configuration (and 4xPCI-e connectors) and uses Active PFC - as most PSUs of its class do. The CX750M also has over-voltage and over-power protection to shield against short-circuits and provide a bulwark against low-impact surges, making for an overall more reliable unit. Never skimp on the PSU.

If you'd like to read more about power supply specifications, you can check out our PSU dictionary over here for a top-level drill-down.

With such a relatively high-end build, it's advisable to make use of an SSD to minimize the single, biggest bottleneck in any modern computer: Storage. Even an SSD is still several-fold slower than the next slowest component, but they perform sequential IO transactions at roughly 10x the speed of the 'standard' 7200RPM HDD and offer excellent random IO performance gains for gaming applications.

We're firm believers in the SandForce controller and its real-world advantages over competition. LSI's controller offers the best sustained IO rates in our testing when accounting for burn-in and secure erases, and in addition to that, they've generally got the least-bursty (more predictable) datarates.

Kingston's 120GB HyperX 3K SSD is our choice for this build, offering 3000 P/E cycles on MLC NAND for more endurance than the usable life of the rig.

Yeah, simple. This basic Samsung optical drive will move your discs in circles at high speeds. It'll even burn them! Wow!

If you've got an older SATA CD/DVD R/W drive laying in a rig somewhere, salvage it and save yourself the $18.

Remember that Corsair PSU/cooling theme? Here's its other half: The case. We first saw Corsair's Vengeance-series C70 case (in military theme) at PAX East 2012, and since then, it seems to have picked up a couple of imitators.

The case ships with 2x120mm intake fans and a single 120mm exhaust fan in its stock configuration, but—as always, with Corsair—has plenty of room for more. Cooling is fine for what we need, but perhaps more importantly, the C70 has some of the best quality offered in a case I've worked with in the $100 price range. It uses solid metals, feels sturdy, has thick panels and generally feels like a tank; the back-side of the C70 offers room for cable management and is riddled with pass-throughs, making for easy routing for novice cable managers. If you're interested in cable management but don't know where to start, we previously wrote this beginner's guide to cable routing.

And that concludes another PC build! We haven't previously pushed SLI very heavily, but now's the time to get into multi-card configurations, given all the driver and game optimization efforts going on.

If you need any help with this build at all, please feel free to post a comment below or post on our forums for more hands-on support. We're here to help you all out.