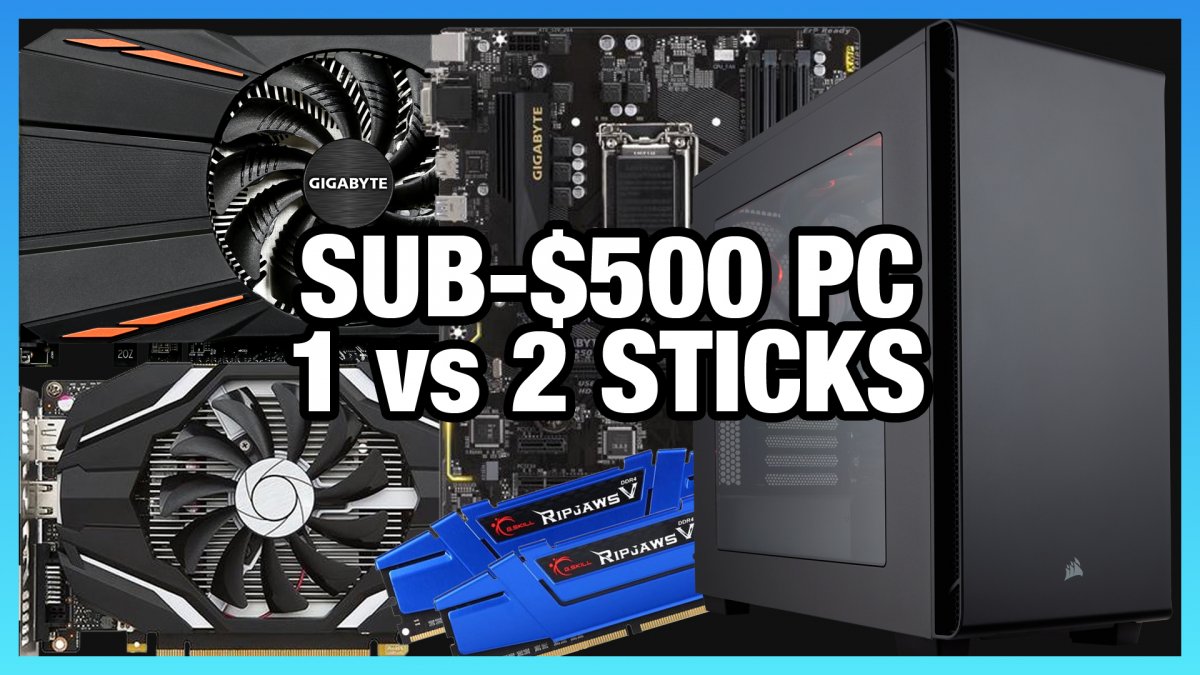 PC builds are always challenged by commenters with alternative component options and whatifs and whatabouts. We took this to mean that PC build lists need more comparative tests, so we tested two different variants of this build: One with a single stick of RAM versus two sticks of RAM, because you can sometimes save money by going 1 stick, and then one with a GTX 1050 versus an RX 560. This should give a somewhat wide spread of understanding for what a base platform G4560 and HD3 motherboard can achieve.

Prices are crazy volatile right now. When we started this project, there were discounts on memory and power supplies that dropped an additional $40 off the price at the time of filming. In all likelihood, once this goes live on Cyber Monday, those sales will probably be re-applied either directly or to directly competing products. Nonetheless, we can say that this build is under $500 – it’s been as low as $430, at times, depending on the sales, but always under $500.

(Note: As sales cycle in and out for the month, you may want to swap some of the above parts for things that become cheaper or take their place in sales).

Testing 1 vs. 2 Sticks of Memory

Let’s talk about the 1 vs. 2 stick testing. For a lot of PC builders who’ve been doing it a while, it just feels sort of wrong to go with a single stick of memory – but on a strict budget, in a time when the memory market is priced many times over what it once was, a single stick may better fit the bill. This comes down to channeling: Single versus dual-channel configurations are entirely contingent on how many slots you populate. It’s a common misconception that “dual-channel memory” or “quad-channel memory” exists, but that’s not the case – it’s just memory, then you populate slots to use the channels available in the CPU’s memory controller. There is no such thing as dual-channel “memory,” only dual-channel platforms and CPUs. For memory stick testing, we’ll look at which GPU performed best in each test, then rerun that test with one stick of an equivalent capacity.

Also, one big reminder on memory: The results you’ll see here aren’t conclusions you can draw across all platforms. If we say that two sticks don’t generally show uplift, keep in mind that we’re only looking at this system. With something higher-end that has fewer bottlenecks, or different workloads, you could very well see bigger differences. 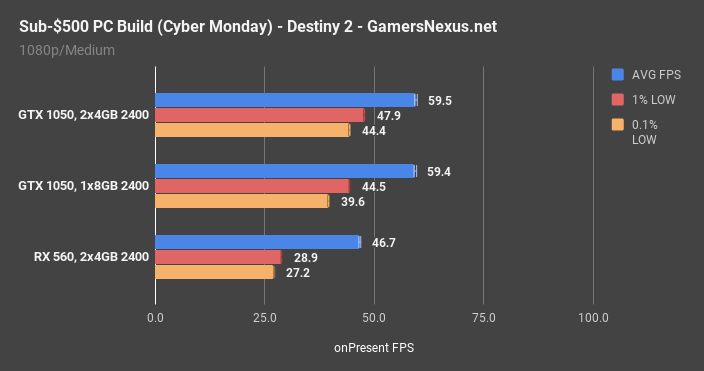 Starting with Destiny 2, we found the GTX 1050 was capable of achieving about 60FPS by playing at 1080p with medium settings, whereas the RX 560 operated an average FPS closer to 47, with considerably greater frametime intervals. The GTX 1050 ends up with a 27% lead, largely thanks to nVidia’s new drivers, and holds close to 60FPS. Going down to one memory stick, we see that the GTX 1050 maintains all of its FPS, effectively. We don’t really experience a performance hit in Destiny 2 by going down to single-channel, aside from a measurable, but unnoticeable difference in 0.1% low values. 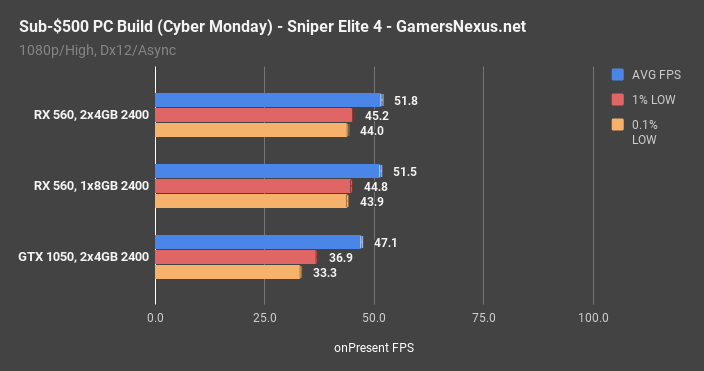 Moving on to Sniper Elite 4 at 1080p and High settings, the RX 560 manages to win this one – not a surprise, given that Polaris does well with DirectX12 and Async compute. The RX 560 ends up 9.8% ahead of the GTX 1050. As for single-channel performance, the RX 560 with one stick ends up at roughly identical performance to the dual-stick configuration, and is completely within variance of tests. 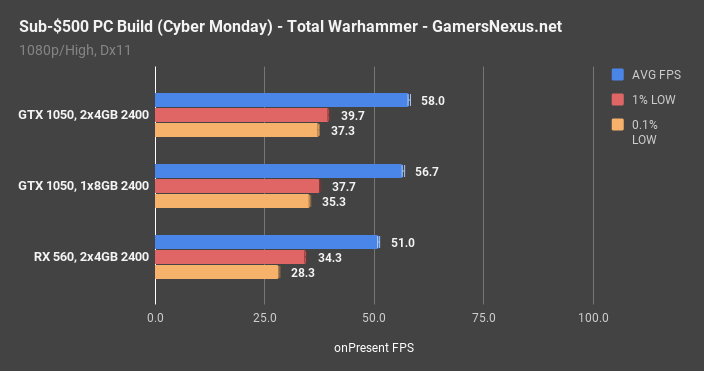 Total War is next. This one was run at 1080p and with High settings. The GTX 1050 maintains a lead of about 13.7% over the RX 560 here, with more consistent frametimes represented in the 0.1% low values. Going down to a single stick brings our GTX 1050’s framerate down to 56.7FPS, which is just outside of our margin of error. We lose about 2% of performance in this more CPU-intensive title. 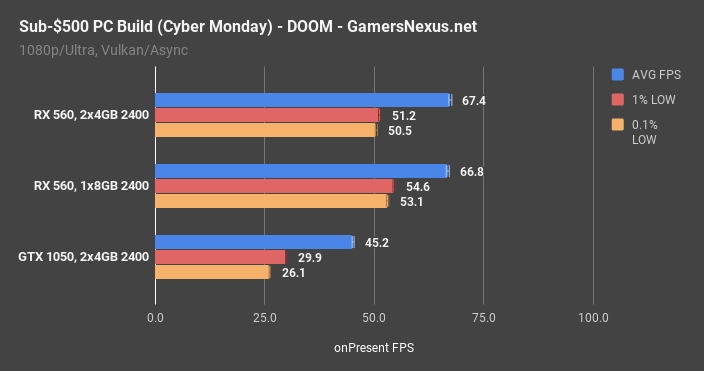 With DOOM using Vulkan and DirectX 12 on Ultra settings and no anti-aliasing, the RX 560 leaves the GTX 1050 way behind – like Sniper, the card is again benefiting from the lower-level API. The RX 560 ends up over 60FPS, nearing 70, while maintaining ultra settings at 1080p. That’s about a 50% lead over the GTX 1050 2GB card, which also suffers in low-end frametime performance in this test. Removing a stick of memory equates roughly the same performance, with no appreciable difference for the RX 560. 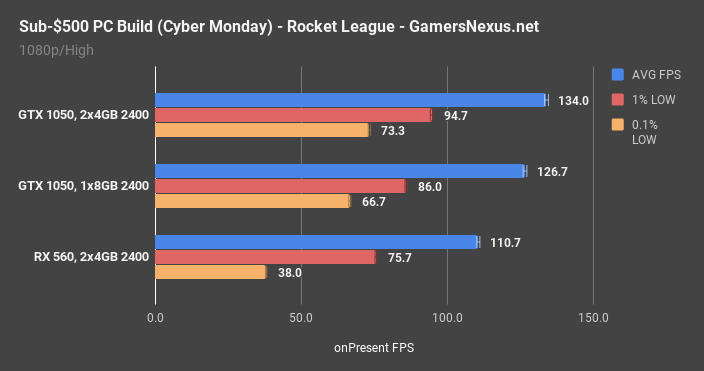 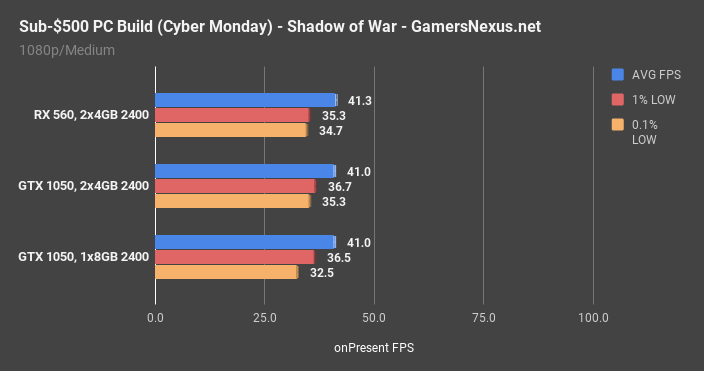 Shadow of War needs medium settings in order to maintain 40FPS, in our testing, and is one of the more abusive titles on the bench. Both the RX 560 and GTX 1050 performed at 41FPS AVG, functionally equivalent. Removing a stick from the GTX 1050 saw the same performance, for no change in this title. 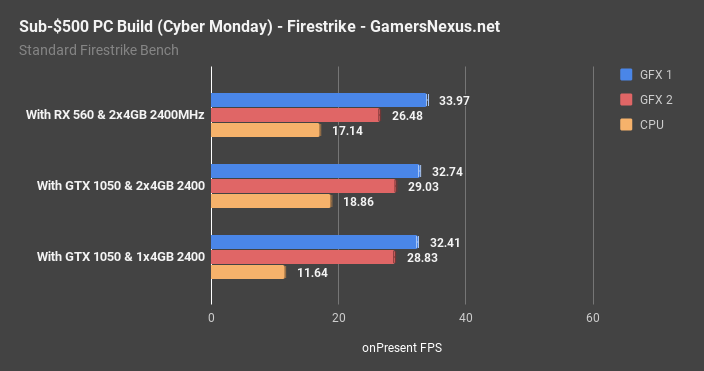 We also have some synthetic results, for what it’s worth: the first chart is Firestrike. For this one, our RX 560 option, priced at $110 after rebate or $124 before, is led by the GTX 1050, which has a 3.4% lead in graphics score. Going down to 1 stick, we ended up 0.8% behind the two-stick test – within variance, actually. That’s the graphics score, though. Looking instead at the CPU score, we dropped about 7FPS off the score – consistently and repeatably. The result is a 38% decline in performance in the CPU test, showing where the change hurts the most. In memory-intensive and CPU-bound scenarios where memory is heavily transacted, the multi-stick configuration helps. 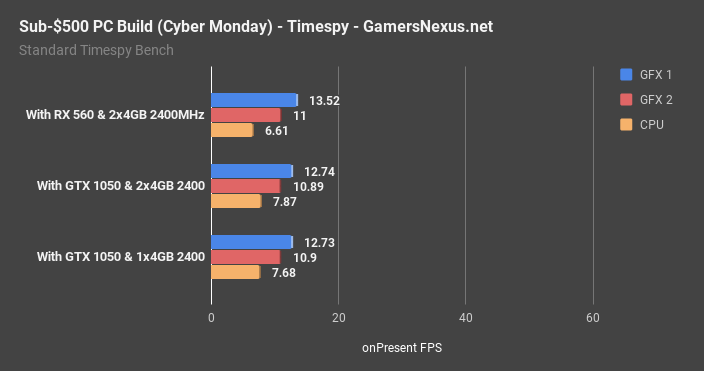 The next chart is for Timespy. For this one, the RX 560 holds a slight lead over the GTX 1050, and the single-stick results are as shown.

That’s all for this build. That should hopefully be enough for you to decide whether you go with the GTX 1050 or RX 560, but if not, check out our best GPUs guide for 2017.