Because these engines are built for PCs first, we're offered the unique option of high-fidelity, industry-driving graphics with low-reaching scalability for lower-end hardware; any modern discrete GPU can handle either of these games, but because of the optimized graphics scaling, more powerful cards will gain access to additional settings.

This guide shows you how to build an $1143 high-end gaming PC for Battlefield 4, complete with overclocking support and hardware that takes advantage of BF4's proprietary visual FX. Before jumping into the PC build list, let's cover Battlefield 4's system spec requirements and recommended specs:

If you're wondering why EA recommends 3GB of video RAM, it's because Battlefield 4 uses high-resolution textures (among other things), and thus consumes more of the video card's RAM.

As an aside, EA mentioned the 8800 GT as its minimum requirement. Ouch! Right in the old!

DICE works closely with both nVidia and AMD throughout the entire development process, and because of these partnership, the Battlefield series makes better use of proprietary GPU-side processing solutions. All the major suppliers - nVidia, AMD, and Intel - have development support teams that interact with large (and sometimes small) game developers to better optimize for their hardware. PhysX, as an example, relies on the GPU for complex computations pertaining to real-time physics events; rather than push calculations to the CPU, as game developers were forced to do many years ago, Battlefield 4 uses nVidia's software-accelerated solution to provide a couple of extra visual features and more streamlined processing.

We opted for MSI's take on the GTX 760, specifically the 4GB version for improved support of high-resolution texture packs and other memory-intensive elements. 4GB of video memory is advantageous elsewhere, too -- modding Skyrim or GTA IV, for instance, will readily push video memory to its absolute brink (faster than most games are natively capable of, actually). Further still, bolstered video memory comes of use in multi-monitor gaming (where AMD still reigns champion), though we'd recommend going SLI or opting for a more powerful card if you're planning to run BF4 on multiple screens.

Believe it or not, Haswell actually brought with it some enhancements to visual FX processing in the desktop world. As we've discussed in the past, Intel introduced new adaptive volumetric shadow map techniques to Dx11 hardware and debuted this tech in CodeMasters' GRID 2; using Intel's volumetric shadowing techniques, it is now feasible for game developers to render smoke (and other volumetric particle FX) with self-shadowing volume. If you see a cloud of smoke kick up from a car's rear wheels in GRID 2, you may notice an extra level of depth to the smoke as a result of its ability to self-shadow. In other words, smoke is rendered with actual volume and is capable of casting shadows upon itself, as would happen in real life when smoke stands between a light source and more smoke.

Other than this, Intel's 4670k sees about a 7% overall improvement over 's 3570k. While the total overclocking frequency gains are technically smaller than what was possible on the 3570k, they produce more power when compared clock-for-clock; that is to say, Haswell may have difficulty OCing past 5GHz, but it produces more power per clock than IB OCs and thus still outperforms IB on the whole.

Granted, if you're building a system purely to overclock, we'd still push you toward AMD's high-end FX line for their enthusiast-driven approach. Intel's 4670k is more powerful for gaming applications (or, at worst, equivalent) to AMD's 8350, but if you just like to make the numbers bigger and play around, AMD is worth a consideration. Note that, obviously, changing the CPU means you'd have to change the motherboard as well (AM3+ socket type). Post a comment below if you have questions about or interest in such a change.

I'll let our most recent CPU Cooler benchmark speak for itself: 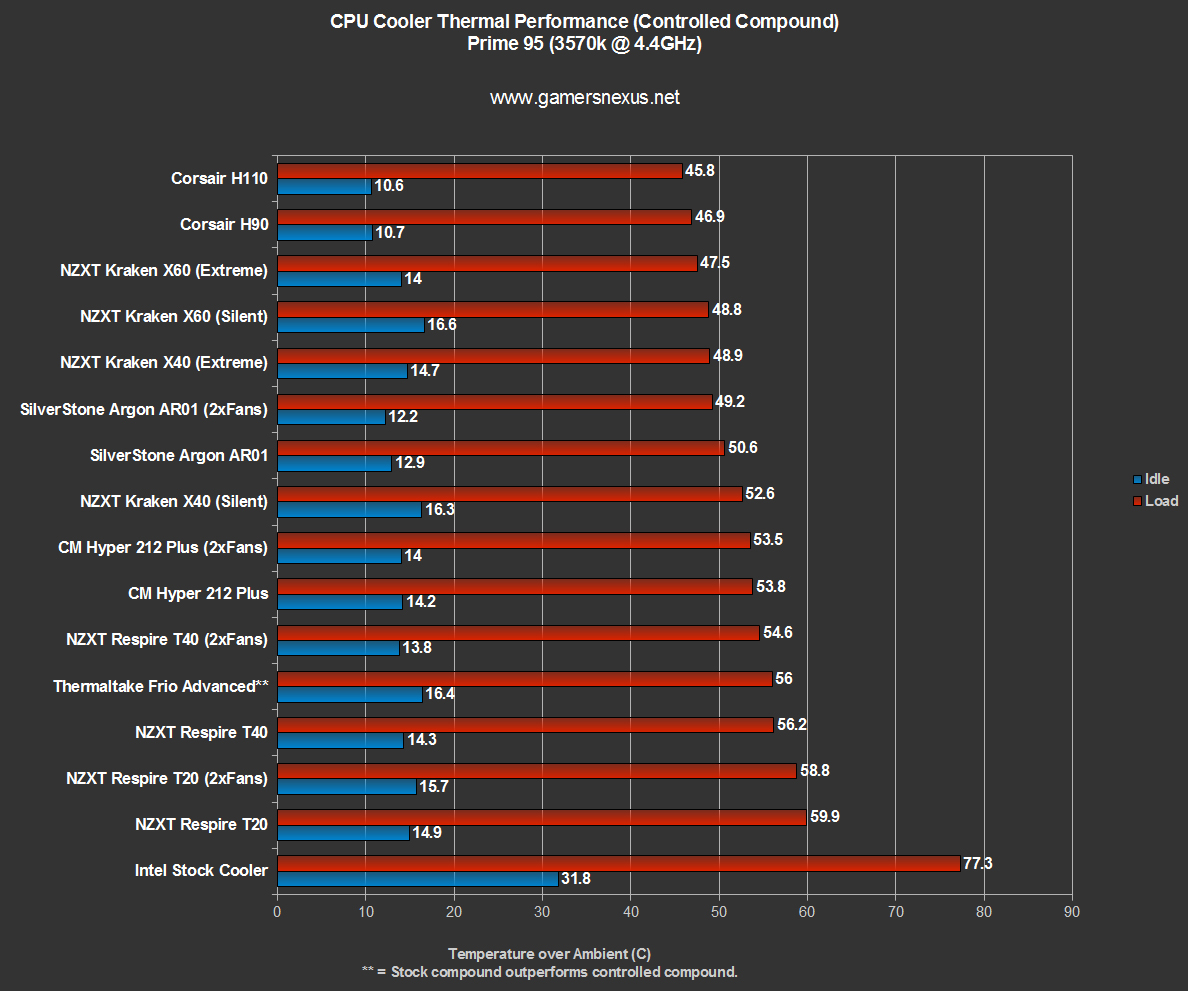 Hands-down, SilverStone's Argon AR01 is the most cost-efficient air cooler on our bench. It handily outperforms all other air coolers we've tested and comes close to low-end liquid solutions, and at $35, it's tough to ignore.

The cost of RAM is still inordinately high due to supply-side Flash pinches, increased consumer demand on mobile devices, and its use in the rapidly-growing SSD market. As someone who recalls acquiring an 8GB kit of 1600MHz RAM for $36 a few years ago, it's a bit painful to see that an equivalent kit now costs upward of $70. Luckily, there are still a couple of spot-sales as retailers work to move product.

2x4GB (8GB @ 1600MHz) kits of Patriot's Viper Xtreme (the 'X' makes it cool) memory are currently being pushed out at $50 after MIR, making for an ... Xtremely reasonable price on a basic kit of gaming-class memory. Sorry.

I wrote an extensive guide on optimal motherboard selection not long ago, and in that guide we recommended MSI's Z87-G45 Gaming motherboard for mid-range machines. The fact is, though, that you'll get more than enough power out of a G45 or similarly-priced competing board for almost all reasonable applications; the GD65 and similarly-priced high-end boards have a few extra power phases and cool on-board troubleshooting utilities, but given Haswell's already-low overclocking ceiling due to heat, it's unlikely you'll ever need to rely on a more complex phase power design than what a $150 board has to offer.

The G45 Gaming board we selected ships with Intel's Z87 Haswell chipset (comparison here), an 8-phase power design with passive phase cooling, and a somewhat hard-to-find red/black color scheme on a matte black PCB. It's a solid foundation for your enthusiast interests and gaming needs.

Because of Haswell's S0iX active idle settings and C6/C7 advanced power saving states, inefficient power supplies are incapable of waking Haswell silicon from idle when the chip operates below 1W. These power saving features are useless for desktop users, and as such, Intel has suggested that motherboard manufacturers disable them by default -- this means you could purchase an inefficient power supply and still get away with using it on Haswell. That said, it's generally good practice to stay within operating spec of your CPU, so we've opted to use a more efficient PSU for this build.

NZXT first impressed us with their HALE series of power supplies back at CES 2013, where we got to look at the topology and internals of their new HALE V2 product line. Well, the Hale82 V2 power supplies are finally available for purchase, and at 550W with 80 Plus Bronze certification (>85% efficiency), you're delivering more than enough power to drive the machine we've configured. Should you decide that you'd like a more powerful video card or SLI configuration, please drop a comment below and ask us if you'll need a more powerful PSU. As the default rig stands, though, you're in good shape and on a PSU delivering clean voltage to the system.

SSDs are a hot item right now. With frequent sales (a few weekends in a row, actually), it's easy to grab an SSD for less than $1/GB and perform at IO rates that approach SATA bus saturation. Because most modern SATA SSDs are differentiated in performance by marginal values, it comes down to controller selection when determining what's most important for your uses. For gamers, quite honestly, any mid-range or better SSD will do just fine; you're not going to realistically notice a difference. Samsung, SandForce (LSI), and Barefoot (OCZ) controllers are all acceptable and well-performing. We generally advise system builders to avoid Agility drives for poor stability and endurance, but the HyperX SSD, Samsung 840 Pro SSD, and OCZ Vector SSD have proven to have high endurance NAND and improved longevity.

For this build, we're using a 120GB HyperX SSD for its $100 price-point and ample performance for pure gaming applications. If you're a power user who dabbles in video editing and recording (high sequential data and incompressible data), like YouTubers might, we'd strongly suggest looking into the Vector SSD for its impressive Sequential benchmarks.

As for an HDD, we picked up a 1TB Toshiba HDD at 7200RPM for gaming and archival storage purposes.

If you're still using CD/DVDs with regularity, grab this burner for cheap and be done with it. If you've got an older system from which a SATA CD/DVD drive can be salvaged, save yourself a few bucks and do it!

Rounding-out our Battlefield 4 gaming monster is NZXT's Phantom 530 case. It's not nearly the monolith their Phantom 630 is, but offers sufficient cooling, cable management, and ease-of-installation options at a mid-tower size and mid-range price-point. The Phantom 530's specs present it as a bit of a 'sleeper,' shipping with 1x140mm and 1x200mm fans, room for 282mm CPU coolers, 310mm video cards, and 26~34mm of cable management on the rear-side.

The case is available in multiple colors.

That's it for this build! If you've got questions about gaming hardware, this build, or customizing your own PC, post 'em in the comments section below or get in-depth, expert support on our forums.

Oh, and keep your eyes tuned to the front page. In celebration of our new site design and layout, we'll be announcing a giveaway with around $1000 worth of hardware. That'll be live within the next day or two; following us on twitter or facebook is another good way to keep updated on that front.