The rightfully named "Loch Ness" Monthly Monster is dubbed so from its build.  This mammoth comes fully equipped with liquid cooling, 4 GPU's, 12 GB of triple-channel RAM, and 3 freaking 15,000 RPM hard drives! The gamer who claims this machine as his own is truly hardcore (and rich).

Without further ado, I present to you, 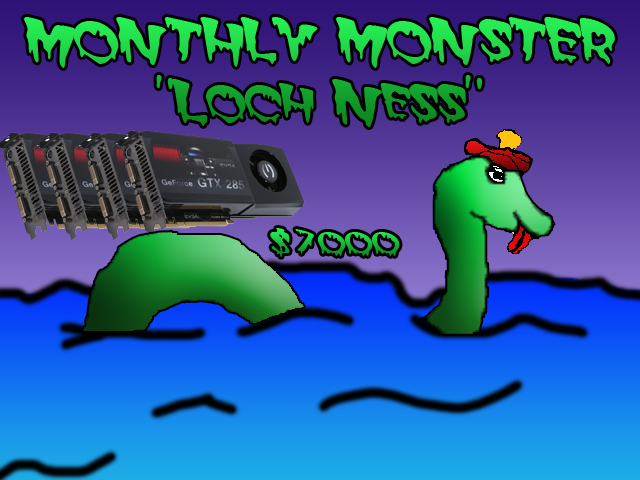 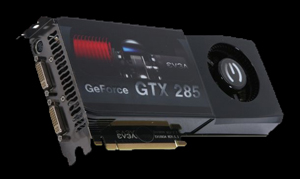 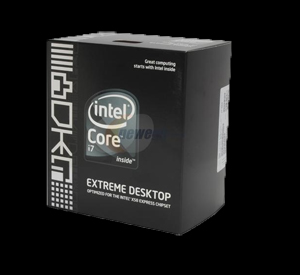 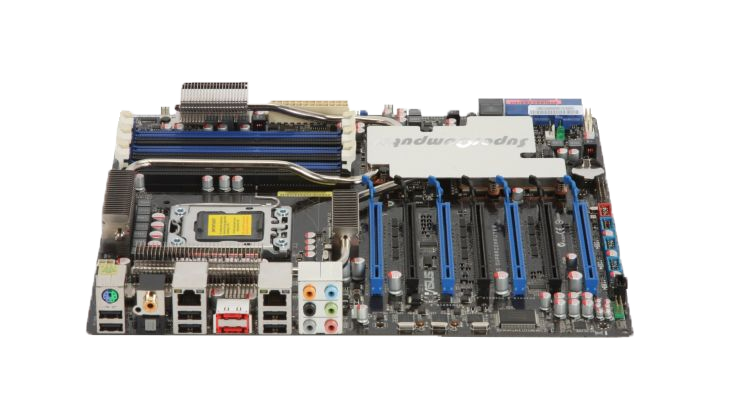 This insane motherboard is truly top-of-the-line.  The ASUS P6T7 WS Supercomputer X58 Motherboard comes with seven PCI-Express slots, Max capacity of 24 GB of RAM at DDR3-2000 (OC), and the ability to bear the behemoth Intel Core i7.  Slap four GPU's into those slots, a Core i7, some sick ram, and you've got bragging rights like no other.  The board (as seen above) also comes with a decent heat-piping system, and some moderate built-in heatsinks.  You can look forward to two external and six internal SATA Ports, six USB Ports, and triple-channel RAM compatability.

The seven PCI-Express slots are assorted as follows: 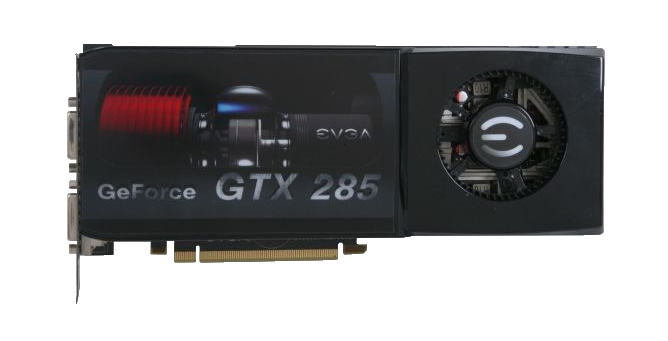 Nvidia's GeForce GTX 285 currently is a big time contender in the multi-GPU market.  Well, we've taken maximum advantage of that to induce maximum droolage.  In this build, you'll find not one, not two, not even three, but FOUR Nvidia GeForce GTX 285's.  The card has 1GB of DDR3, a 512-bit interface, clocking the core in at 648 MHz (Core Clock), shaders at 1476 MHz (Shader Clock), and a whopping 2484 MHz Memory Clock! Adding epic to awesome, the GTX 285 has a not-so-stingy 240 Stream Processors, dual DVI, HDMI, and HDTV Out.  Unfortunately, the max resolution is only 2560 x 1600... gg no re.  This monster does require two 6-pin power connectors though, so our PSU needs quite a few of those. 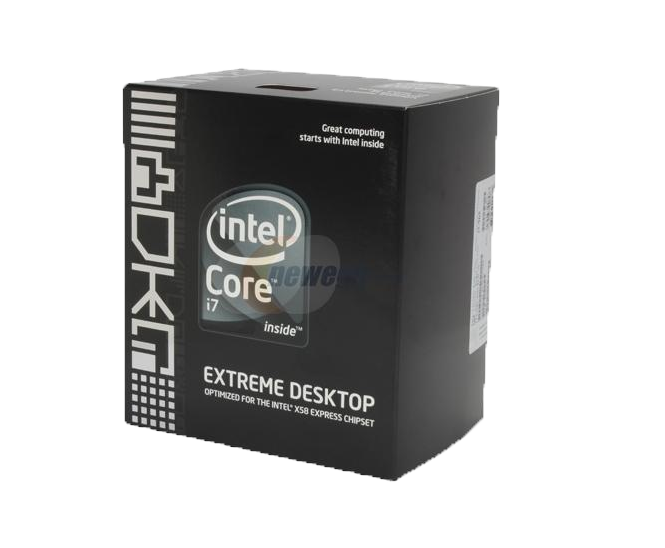 The omnipotent Nehalem Core i7 Extreme processor, a CPU that before GN, everybody cowered from.  Cower no more!  We bring the Core i7 Extreme into new light, and then stuff it into the belly of the Loch Ness Monster. At a scary 3.2 GHz pre-OC speed, the quad-core i7 deserves some attention. Hosting 4 x 256 KB L2 Cache, and 8 MB of L3 Cache, there's not much this baby can't do (except get cooled quietly without Liquid Cooling).  45 NM technology doesn't hurt either, we only wish we had a sponsor (*cough cough*) to purchase one of these for testing!  Careful opening the box, it's a known issue that customers who are not worthy spontaneously combust. 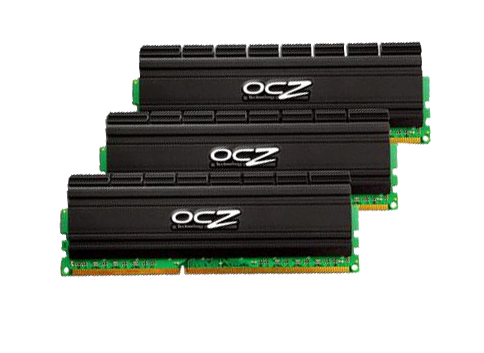 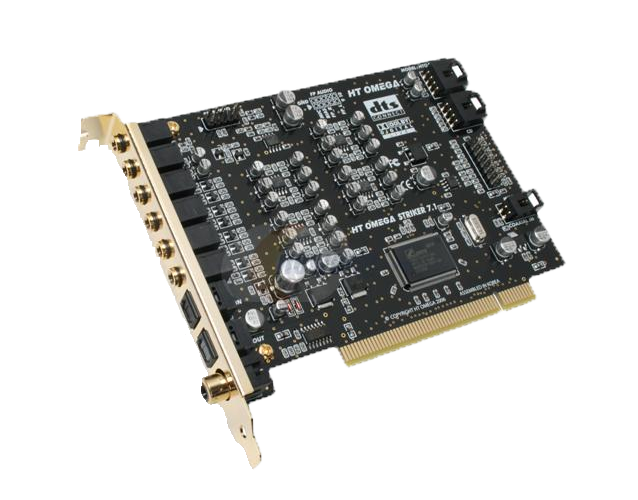 A 7.1 96 KHz Surround-Sound capable HT | Omega Striker will do the trick for enhancing the realism of owning online.  Expect to hear your enemies' footsteps from a mile away, with full 3D functionality, letting the gamer pin-point exactly where they are.  Comes with all your standard sound-peripheral ports and some. 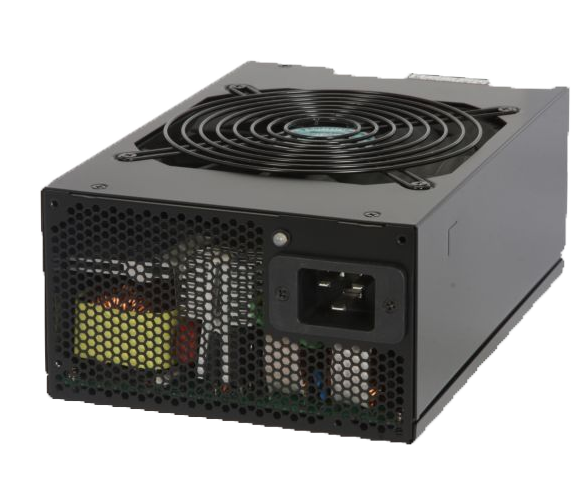 There really isn't much to be said here. Silverstone's ST1500 PSU runs at an 85-88% efficiency, supplying 1500 horsepower for your monster.  Your Quad-GPUs will be happy to know that it comes with 4 x 8pin connectors, and 8 x 6pin connectors. Seven 12v rails are also included, and it is in fact 24-pin.  Pretty standard, well, save for the 1500 W bit. 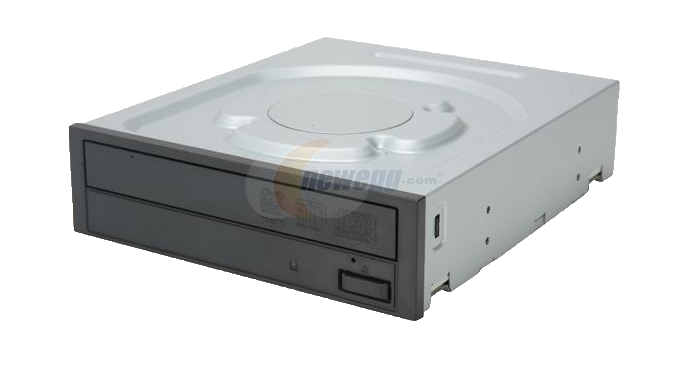 I tried hard to find something more ridiculously expensive that performed better than this Sony Optiarc Burner, but I could not.  It does have standard/above par speeds, and I've listed them below.  The Optiarc also has 2MB of cache, not bad I suppose. 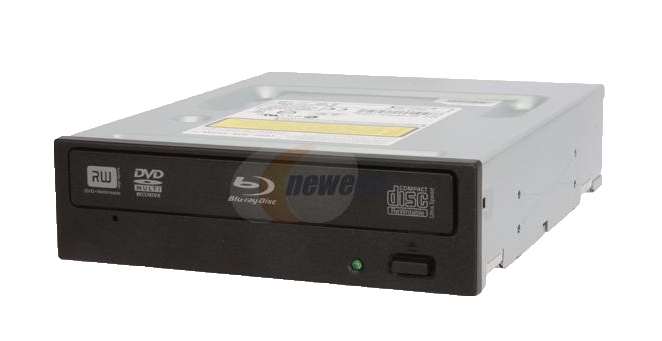 Pioneer's Blu-Ray burner is ideal for making large backups or movies.  It does have a good price for its speed, and has 4 MB of cache.  Check it out! 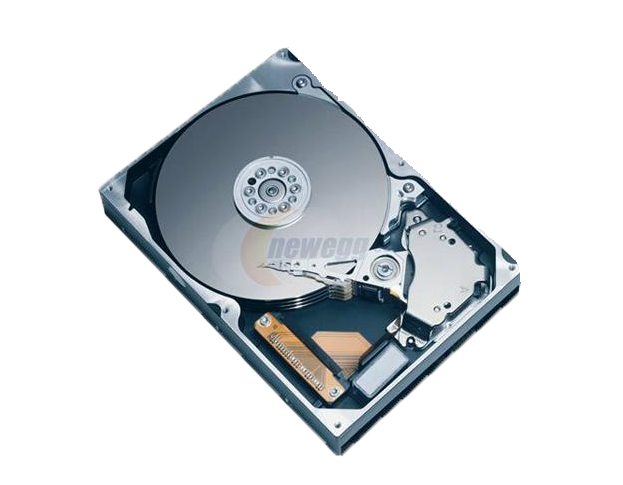 Fujitsu's 300 GB 15,000 RPM SCSI SAS hard drive is just... insane.  It's 15,000 RPM, has 16 MB Cache, and is a moderate 300 GB for $310 each.  Sure, you can get a 1TB Seagate for $100, but those are half the speed and are notorious for being unreliable.  This is a similar make to those used in high-end web and game servers around the world, which are specifically SCSI SAS to ensure reliability.  In this build we've included 3 of them, just so you can get the full 1 TB experience.  900GB of 15k RPM drives will keep your gaming at peak performance for quite some time, and you won't have to fret about losing those saved games! 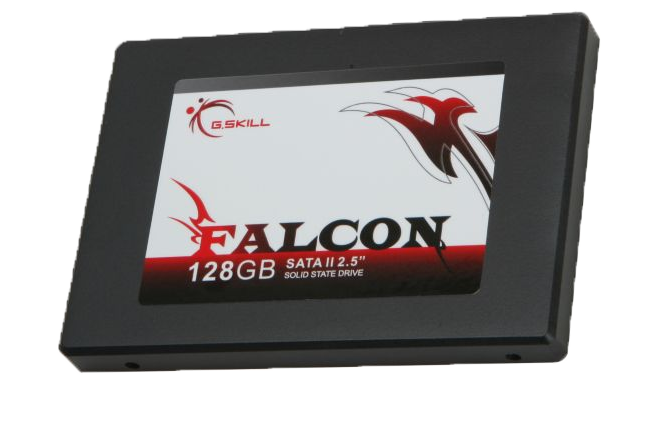 If the three 15000 RPM Drives weren't enough for you, we picked out this 128 GB Solid State Drive for your operating systems and critical files.  The drive will outlive you, as it clocks in at an estimated 1.5 MILLION hours of life (roughly 171 years).  It has more than enough space for any number of OS's you want on it, and we recommend that you put video-editing, animating, rigging, or other programs that consume large amounts of time to render objects on this drive.  The drive reads at 230 MB/s and writes at 190 MB/s, so if you find yourself rushing out the door while copying files, this is for you!  G.Skill's falcon also comes with 64MB of DRAM Cache, and it only takes up a 2.5" bay!

Since the Motherboard we've picked out doesn't feature SCSI(SAS) connectors, we had to go out of the way and put a $125 adapter, which offers four SATA to SCSI converters.  In case you were wondering, we've double checked, and it does indeed support the read/write speeds of the SCSI (SAS) hard disks. 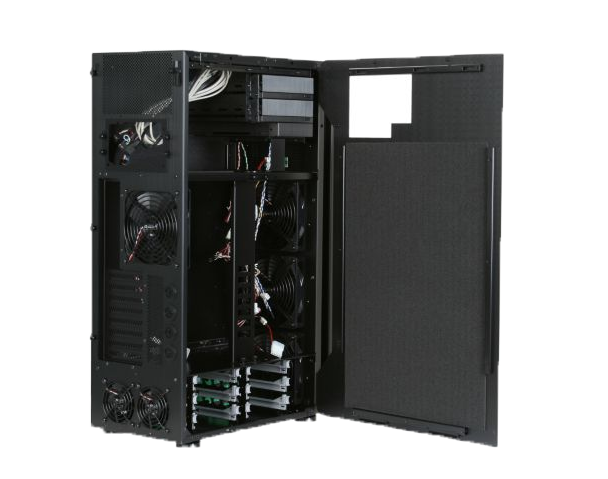 It was definitely tough to find a case that would be tall enough to fit four video cards, but we did it.  This disproportionate spawn of ABS goes for maximum airflow and maximum cable-management, and sets itself apart by separating the Hard Drive bays from the Optical bays.  In the picture above, you can see that the hard drives are located in the bottom center, drives are where they normally are, PSU is in the top, and there are quite a few fans throughout the case internally.  The front of the case is a bit bland, but it could be considered slick too - depends on the user.  It is easily moddable, and is made out of Aluminum for breathability.  The case also has four holes for liquid-cooled systems, which our Monthly Monster is named after.  While the Canyon should be renamed to the Mountain, it is one of the few cases that will fit all 4 GPUs.  The unique bay-placement allows additional room for those longer video cards, while still leaving considerable space for fans and airflow.  ABS' Canyon may lay claim to the Gamers Nexus fancy-pants case title, as far as we are concerned. 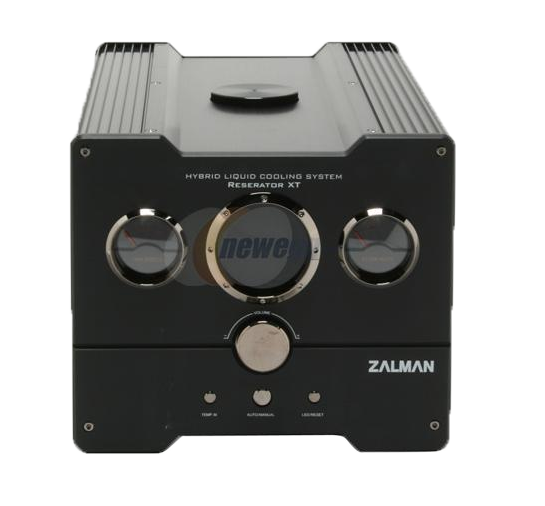 Maintaining the title of "Best" in any industry is tough work, yet ZALMAN seems to pull it off at each turn.  Famous for their CPU air-cooling solutions, ZALMAN has made a surge into the market of Liquid Cooling, and now provides the best option out there.  It's the complete package - Reservoir, Radiator, and water pump - comes with multiple guages on the front to optimize your waterflow, and even has a 140 mm fan in the back to keep itself cooled down.  The Reserator XT pushes 300 L of water per hour, and considering it only holds 1.25 L of coolant, that's pretty crazy.  We were sketchy about keeping 4 GPUs and a Nehalem i7 Extreme cooled efficiently without blowing out your eardrums, which is why we went liquid with the Loch Ness Monster!  Throw some LEDs in your pump-tubes for the heck of it, and you end up with a sweet machine. 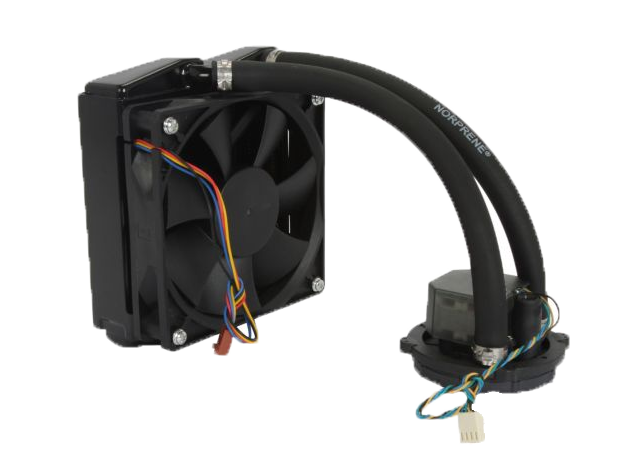 Masscool's Liquid Cooler will connect that nice reserator XT with the CPU, meaning no noisy fans to keep Intel's best product cool.  Based on some customer reports we've read, it will keep an i7 running quietly at 25 C.  It does come with a fan for the hybrid effect. 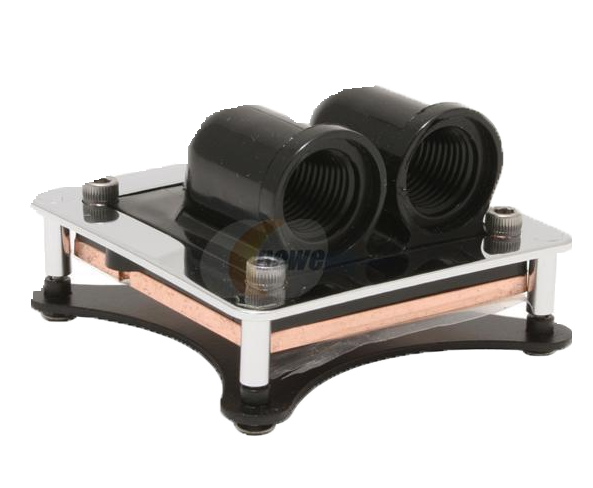 We couldn't forget the Quad-GPU in old Nessie, and as such we've included the Swiftech Waterblock Blisterpack, used for keeping those GTX 285's cool.  It hooks up to the Reserator XT and pumps water through efficiently, and most importantly, quietly. So you've just built your $7000 machine, it's stormy out - but you don't care damnit, because you want to try that computer!  You turn it on, it loads, then... BAM!!! It dies.  Well that sucks.  For $17 you can't go wrong, especially if it is to protect a $7000 investment, not to mention the time investment.  We're completists here at Gamers Nexus, and CyberPower's 850 surge protector completes the Loch Ness monster.  It'll take a 2400 Joule hit for your computer, better safe than sorry.

Little do people know, the Loch Ness is also named for how much drool it has collected from gamers around the world.  We hope you enjoyed looking at this build as much as we did putting it together!

Comment about our build below or in the forums!

Like it?  Buy the Monster and included bragging rights here: