MSI Radeon R9 270 Twin Frozr ($170): Now that cryptocurrency prices have stabilized (or crashed) and AMD has forced aggressive price control down its retail channels, we finally see the R9 270 return to its position as the best sub-$200 video card. Technically, R9 280 video cards can now be had for right around $200-$230, so if you've got the extra ~$30 to spend on an R9 280, we'd strongly encourage it. Still, MSI's take on the R9 270 nets us one of the most powerful GPUs in its price range; as my testing has shown, it'll power through Battlefield 4 (when overclocked) at maximum settings / 1080p with an average FPS of about 50. If you were to drop the settings just slightly (like decreasing AF/AA), you'd easily rest around 60FPS for smooth gameplay with high-fidelity graphics.

I also tested Metro: Last Light and Total War: 2 (more as a CPU item, though). The video card powers Metro: LL at approximately 50FPS with near-max settings and will push 60FPS with AA lowered. The benchmark charts below show the performance difference between the stock and overclocked settings; for the overclocked test, I pushed the CPU up to a comfortable 4.1GHz and had the GPU BCLK at 995MHz (from 955MHz). For help overclocking, check out the accompanying video for this PC build or check our overclocking primer.

The short of it is that this PC will readily play any game out at max/near-max settings with a 1080 resolution.

AMD 760K Richland Athlon CPU ($90): This CPU is bundled in a combo deal with our aftermarket CPU cooler for $10 off. AMD's modern Athlon CPUs are a far cry from their market positioning in the initial x64 days, but they're still powerful contenders in the budget and OC marketplace. The modern Athlon CPUs are effectively APUs with the IGP disabled on the silicon, so you end up with strictly the CPU component and have a requirement of a discrete video card; because we're buying a dedicated GPU anyway and have little need of dual graphics between the APU/GPU, we can save a good deal of cash by opting for the Athlon 760K Richland chip. AMD's 760K Richland CPU will give the best performance anywhere remotely close to this price right now, and with the help of our bundled aftermarket cooler, it'll OC pretty easily for an additional couple hundred megahertz (and more, if you're willing to tweak carefully).

Check out the accompanying video to get a crash course in OCing this CPU for an extra few hundred megahertz. Hit our overclocking primer for more in-depth guidelines if you're going to push it harder than that. This little powerhouse CPU runs pretty hot, so adjust carefully.

Phanteks PH-TC12DX ($60): This CPU cooler is bundled in a combo deal with the CPU above. Phanteks' mid-range TC12DX 120mm air cooler ships with 2x120mm fans at moderate speeds -- helping to retain reasonable dB levels -- and has a sleek aesthetic for viewing through the large G41 window. The cooler uses a direct contact coldplate, 4x6mm heatpipes, and the dual-fans to allow easy overclocking at lower thermals than the stock cooler would ever permit.

Kingston HyperX Genesis 8GB 1866MHz ($73): This RAM is bundled in a combo deal with the motherboard for $12 off. Because we're not relying on an IGP for the graphics, memory frequency isn't as huge of a factor in overall gaming performance as it would be with an APU or IGP. Still, at $73, this 1866MHz RAM gives some room for overclocking experimentation without pushing the budget into more serious enthusiast level tweaking. Using the first XMP setting will establish the Genesis RAM at 1866MHz @ 10 CAS latency; the second puts us at 1600MHz with a 9 CAS latency.

MSI A88X-G45 Gaming Motherboard ($120): This motherboard is bundled in a combo deal with the RAM for $12 off. We first previewed this A88X motherboard at CES, where MSI walked us through the board's overclocking feature set (pre-Kaveri launch). MSI's G45 board hosts an A88X chipset -- FM2 & FM2+ compatible (full details vs. A85X here) -- and gives some upgrade pathways as Kaveri and successors continue to roll-out. Up to 2 video cards in SLI/CrossFire can be supported on dual-x8 PCI-e slots, RAM overclocks to 2400MHz, and OC Genie makes a one-click overclock possible for those who don't like to manually configure settings. We'd always recommend manually following-through for best effects, of course, so check the video for that information.

Rosewill HIVE 550W Continuous ($60): This power supply is bundled in a combo deal with the case for $15 off. Given a sub-100W TDP of the 760K and the ~150W TDP of the R9 270, even with overclocking and other overhead, a 550W PSU gives plenty of breathing room for the components and upgrades. This PSU is rated as 80 Plus Bronze, so it's relatively efficient for a power supply of its price and capacity, but not anything to write home about. The combo price makes Rosewill's 550W semi-modular Hive PSU one of the best value buys for a build of this caliber. Modularity couples with Thermaltake's ample cable management room to ensure the system remains clean inside.

Western Digital Blue 7200RPM 1TB HDD ($60): SSDs are pretty damn affordable right now, but if you can't drop $100 for 240GB, this WD Blue HDD will act as a primary drive with good speeds for gaming. 7200RPM is enough to play games and run an OS smoothly and 1TB is a solid starting point for storage, making WD's Blue HDD one of the best values for the hardware. 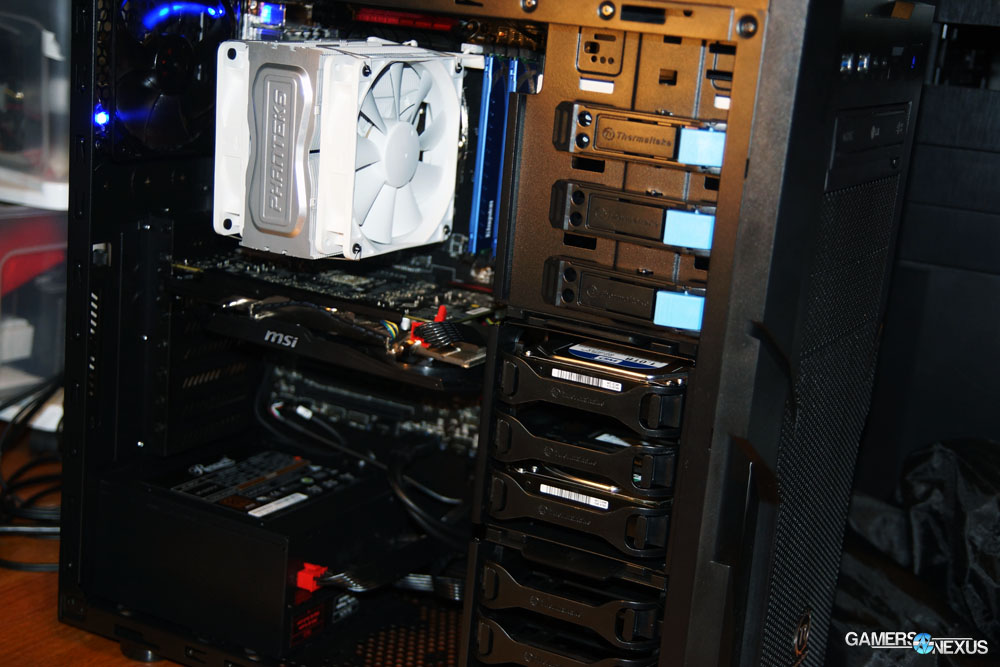 Thermaltake Commander G41 Case ($70): This case is bundled in a combo deal with the PSU for $15 off. Thermaltake's Commander G41 mid-tower is a new ATX form factor enclosure (review soon) that effortlessly fits the entirety of this PC build; it's got a fairly significant allocation area for cable management in the right side of the case, leveraging a bezeled-out side panel for tidying-up stacked 6- and 24-pin connectors.

The case ships with 1x120mm front intake fan and 1x120mm rear exhaust fan, but can accommodate 1x120mm bottom and 1x200/140mm top or 2x120mm top (along with relevant radiator sizes). The top is also bezeled-out slightly, making it easier to fit the usual fan sizes (25-30mm height) without colliding with the CPU cooler. Should you desire an additional fan, we'd suggest a 140mm or 200mm top fan configured as intake for the CPU cooler. In my testing, overclocked CPU performance was approximately 2-3C cooler when using this configuration. If experiencing thermal issues with the GPU, opt instead for a bottom-mounted intake fan to directly cool the video card.

And that's it for this PC build! This one was a much larger undertaking than what we're used to, but I hope it's helpful for those of you trying to glean a better understanding of performance and overclocking basics. This is a solid machine to get a start on with basic OCing and high-performance gaming, gives upgrade options via the FM2+ socket compatibility, and should pump-out graphics at max/near-max for a long time yet. And it's very affordable given the ability to output near-max settings on most games.

Check our free expert support forums or comment below for further assistance!