ZOTAC NVIDIA GTX 980 4GB ($550): We combined this GTX 980 with a Seasonic power supply for $15 off. The GTX 980 is the best-performing GPU we've ever tested – outperforming even the 780 Ti and 290X in gaming applications – and is priced relatively affordably when compared to previous flagships. Here's just one slide from our extensive benchmark to prove things: 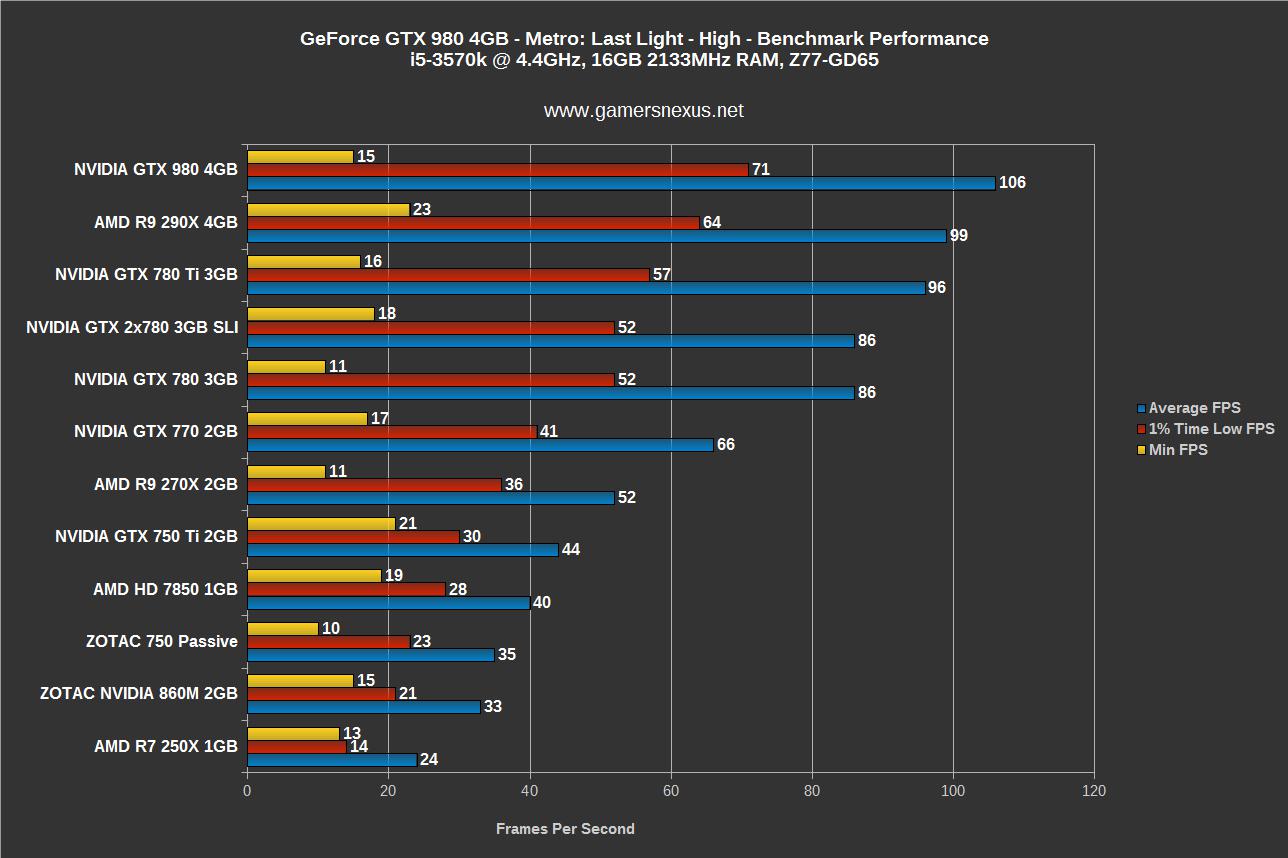 The GTX 980 uses nVidia's new Maxwell architecture, featuring new compression technology and DSR (Dynamic Super Resolution), all working to improve gaming visuals and performance without increasing the TDP. The GTX 980 has an operating TDP of about 165W, making it one of the most efficient video cards on the gaming marketplace. This allows us to buy a smaller power supply and keep operating costs lower as time goes on; TDP is an important consideration when building for the long-term or for extended uptimes, as a production or streaming rig might undergo.

Intel i7-5820K HW-E 6-Core ($390): We combined this CPU with an ASRock motherboard for $30 off. Intel's i7-5820K is one of three available SKUs for the HW-E processors, including the $1000 8-core CPU and $590 6-core at 3.5GHz. The 5820K is the most affordable Extreme Series CPU and, unless you're doing heavy-duty render farm work, will blow-away most hobbyist and semi-professional encoding and video editing tasks. The high-end 5960X chip has 20MB of L3 cache and 8x256KB of L2 cache over the 5820K's 15MB L3 / 6x256KB L2, which will see heavy saturation and use in professional-grade 3D rendering or high-bitrate and max-depth video, but won't be worth the added cost for most semi-pro or hobbyist users.

The Extreme Series CPUs use Intel's revamped LGA2011-v3 socket, which is different from the preceding LGA2011 socket type. The motherboard must be compatible with LGA2011-v3 (ours is, but double-check if you change it to something else).

The most notable expansion on HW-E over all other existing consumer CPUs is its move to adopt DDR4 memory, capable of significantly higher speeds and increased bandwidth. This has absolutely no value for gamers, but high-end production applications (Adobe Premiere and Blender included) will make use of the extra bandwidth.

NZXT Kraken X61 ($124): Extreme Series CPUs don't ship with stock coolers. The chips run a bit hotter and Intel wants to drive buyers toward something more befitting of an X-class processor, forcing aftermarket buying. We've opted to use NZXT's X61 CLC (closed-loop liquid cooler) for the task, an upgrade over the X60 we tested some time ago. The X61 has full software control over the pump and fan speeds, meaning you'll be able to fine-tune for noise or performance, depending on the workload. A sleek LED on the pump adds to the blue/black theme we've opted to use.

G.SKILL Ripjaws 32GB DDR4 RAM ($530): It's rare that the cost of RAM meets the cost of the video card. DDR4 is still staggeringly expensive and will remain that way for a while yet (we don't expect mass market consumption until sometime in the next few years). The bandwidth and speed gains are unremarkable for gamers, but have great potential for professional-class use case scenarios. By saturating four memory slots (or eight, if you go to 64GB of RAM), the CPU is able to run the memory bus in quad-channel for greater capacity in the pipe. This will directly and heavily benefit render or encode environments.

ASRock X99 Extreme6 X99 Motherboard ($280): We combined this motherboard with the i7-5820K CPU for a $30 discount. On the aesthetics side, ASRock's Extreme6 motherboard fits the blue/black color scheme we've opted for among other components (RAM included) and has a look befitting of an “Extreme Series” system. As for specs, RAM is overclockable up to 3000MHz, CPU OC support comes in the form of a 12-phase power design and high-end components, and solid capacitors are used specifically for the on-board sound solution.

Seasonic SS-760XP2 PSU ($155): We combined this PSU with the GPU for a $15 discount. Seasonic's 760W PSU provides more than enough power (and leaves room for upgrading) with our GTX 980 configuration and – better still – it's rated as 80 Plus Platinum (88-90% efficiency) to reduce cost over time. The unit is fully-modular for easy cable management and offers all the high-end power, voltage, and surge protection features one would expect from a $155 power supply. A 7-year warranty puts it over the top.

Samsung 850 Pro 512GB SSD ($400): We've already posted about Samsung's 850 Pro and its debut of VNAND (“3D NAND”) process, effectively the “next” step after TLC NAND. After recent price drops of the 850 Pro, Samsung's new drive presently stands as one of the best cost-per-GB options out there given the professional-class performance. The 850 Pro ships with several encryption options and sustains a high throughput for production users.

WD Black 2TB 7200RPM HDD ($140): The recently-updated hard drive reliability benchmark has proven that – when Hitachi is unavailable – WD stands as the most reliable consumer hard drive brand. It also highlighted that lower-capacity consumer HDDs have greater endurance as time drags mercilessly on.

2TB will be enough to get your media station situated, and at 7200RPM, it's plenty fast for application installs when you don't want them on the SSD. We'd suggest performing all temporary media operations on the SSD while live, then moving them to the HDD after completion of the project.

Corsair Graphite 760T ($170): Use code “ZPNXTT10” for an instant 10% discount. We first found Corsair's 760T at CES 2014, where we instantly fell in love with the case's crystal-clear, hinged side panel and large build space. The unit ships with support for 3x3.5” drives, 3x2.5” drives, and 9xExpansion slots, giving a solid starting point for media production. 3x140mm fans are included stock, but there's room for more (as always) if necessary. We don't think more cooling will be necessary given the low TDP of the GPU and the high performance of the X61 cooler.

Let us know if you have any questions about this build or need assistance in assembling something cheaper (or more expensive) for your needs!