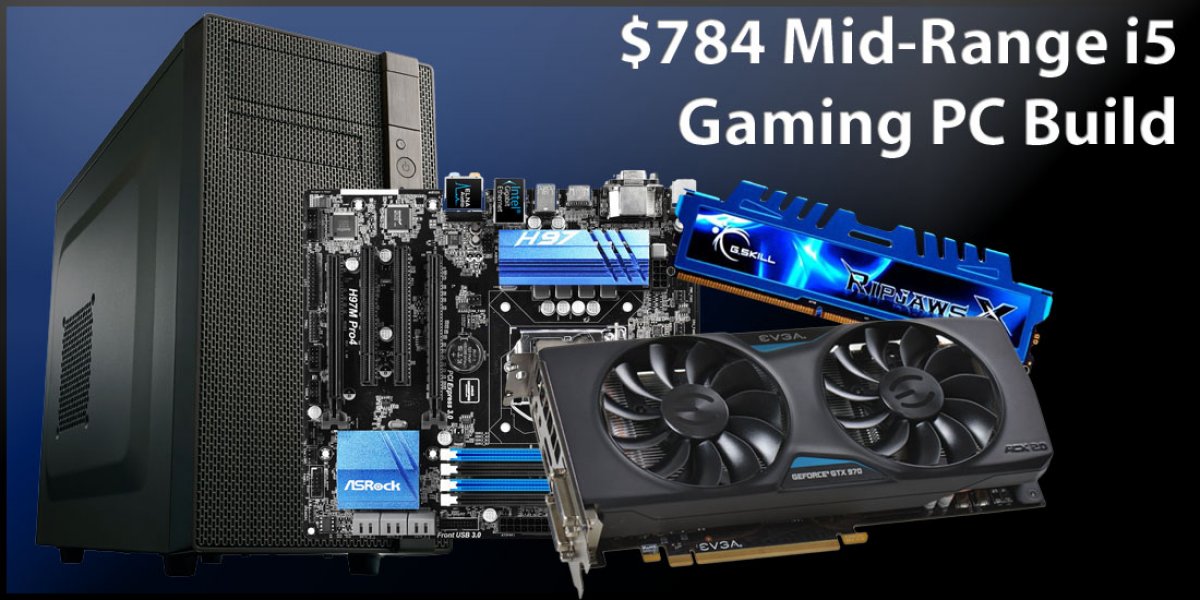 EVGA Super Clocked 970 ($320): The video card is one of the most critical build components for gaming. Something powerful is needed, but there has to be a reasonable balance between its power and the other components. In this case, we’ve chosen the EVGA Super Clocked GTX 970 for $320. It will perform well at around high and ultra settings for most games at 1440p and 1080p.

Our most recent benchmarks including the GTX 970 can be seen here. As a reference point, it generally performs a bit below a 290X/390, a bit above a 770, and decently below the GTX 980. The dual-fan design helps ensure that the card remains reasonably cooled during load -- although this isn’t incredibly hard due to the efficiency of Maxwell -- and retains silence. The GTX 970 comes with 4GB of VRAM, a core clock of 1.2GHz, and support for 4k.

Intel i5 4460 ($190): For this build, we’ve chosen a $190 i5-4460 CPU. Despite the recent release of the Skylake K-SKU CPUs (i5-6600K, for instance), there is short supply of Skylake CPUs and the locked Skylake CPUs are yet to be released. An unlocked CPU doesn’t work well in this budget, so we’ve instead chosen the 3.2GHz i5-4460. It may not have an unlocked multiplier (used for overclocking) or the highest base clock around, but it’ll perform admirably for gaming. In certain cases it can turbo up to 3.4GHz to provide a bit extra speed.

With it being an i5, the CPU has four cores and four threads (one per core). It comes with a stock heatsink that will adequately cool it, but for users wanting cooler and/or quieter operation, the Cryorig H7 is a good addition for $35. This will also improve longevity.

It should be noted that the lower x16 PCIe slot is actually wired for x4. The board also has 4xUSB 3.0, 4xUSB 2.0, 1xPS/2, 1xDVI-D out, and 1xOptical on the I/O. The Pro4 is a good budget motherboard that will work fine for this micro-ATX build.

G.Skill RipJaws X Series 8GB DDR3 ($47): This build features G.Skill RipJaws Series 1x8GB DDR3 1600 RAM – quite a mouthful. This RAM is fairly standard in that it is DDR3-1600, has a CAS latency of 9, and runs at 1.5v. 8GB is enough for gaming currently, and having one stick allows for easy upgrading to larger RAM capacities if needed down the road. Currently, the G.Skill RipJaws Series 8GB RAM is available for $40 at Newegg. It also has a lifetime warranty.

Using a single stick of memory means that dual-channel operation is lost, but this is something we’ve found to have minimal impact on dGPU gaming performance. View our dual-channel and “single-channel” benchmarks here.

SeaSonic S12II 520W ($55): Next up is the power supply, for which we are going with the SeaSonic S12II 520W. 520 Watts is definitely enough for this build. This allows the PSU to be used in future builds if needed/possible. It has 1x6 and 1x6+2 pin connectors, which fits the EVGA GTX 970’s requirements. The SeaSonic S12II is 80 Plus Bronze Certified, so it is reasonably efficient. To top all this off, SeaSonic has a 5 year warranty for this PSU.

Western Digital 1TB Blue ($52): For the regular user, this hard drive will provide adequate speed and capacity to start with. It’s not winning any speed awards, but the price per GB is still advantaged over SSDs, although read, write speeds, and seek times are worse. The WD Blue is a standard 7200 RPM HDD.

Samsung 850 Evo 250GB ($90): For users wanting a faster drive for the operating system, games, and commonly used programs, the Samsung 850 Evo 250GB SSD is a good addition to this build. SSDs provide substantially better read, write, and seek speeds compared to SSDs, and also uses less power. This SSD comes with a five-year warranty backing it, granting it a longer warranty compared to much of its competition.

Cooler Master N200 mATX ($45): This build will use the Cooler Master N200 to house the components. It is an mATX case, making it a smaller and more compact case than many more  common ATX cases. The N200 supports graphics cards up to 355mm, so even long GPUs can fit with ease. The N200 has reasonably good watercooling support, which is nice addition to a case at this price point. It supports 3x3.5” bays, and 4x2.5” bays. Of course, as with any modern case, the N200 also has front USB 3.0 ports.

While the stock Intel cooler is pretty short and isn’t near this tall, the N200 supports CPU coolers up to 160mm. The Cooler Master N200 comes with 2xCooler Master XtraFlo fans.

While Skylake was recently released, the unlocked CPUs -- which are the only ones currently out -- aren’t a good fit for lower-budgeted builds. For this most recent ~$770 gaming PC build, we’ve gone for a locked Haswell i5 and GTX 970 combo to achieve satisfactory performance at 1080p and (to a slightly lesser extent) 1440p.