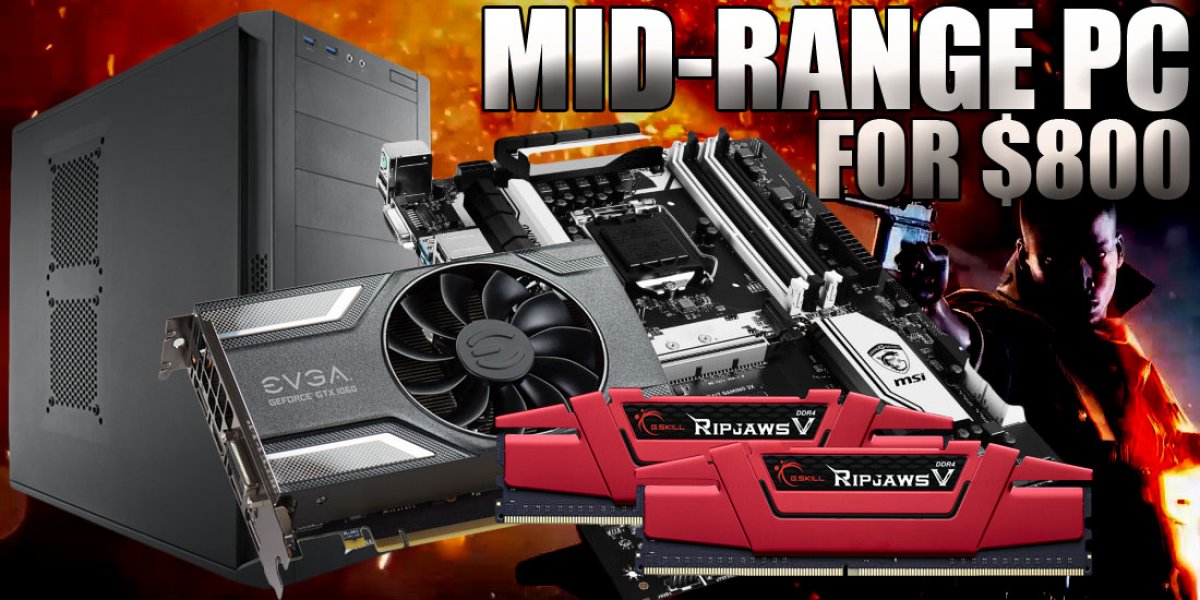 1080p remains the most popular resolution in use today, with more than 80% of the market sticking to existing 1920x1080 displays. Just a few years ago, a fairly beastly rig was needed to run games at 1080p with High to Ultra settings. AMD and nVidia have released new video cards nonstop this year, each enabling 1440p gaming at the entry-level market, or bolstering 1080p to max game settings. These new releases include the RX 480 and the GTX 1060 $200-$250 options, both of which we've reviewed.

You no longer need a $1200 gaming PC to game at 1080p/ultra, and 1440p now comes as a "free" add with these mid-range GPUs. This $800 gaming PC build targets ultra settings in Overwatch at 1440p, and will be capable of high settings in Battlefield 1 (and likely Titanfall 2).

In the paragraphs below we’ll go over our parts list and why we chose the parts for this rig like we did:

How to Build a Gaming PC Tutorial

Above is a tutorial we filmed for PC building earlier this year. If you prefer the written guide, check this out.

EVGA GeForce GTX 1060 6GB Gaming ($250): We went with EVGA’s 6GB GTX 1060 as it comes in at $250 with an AIB aftermarket cooler. AMD’s RX 480 was considered for this build, but the RX 480s in the $240-$250 launch price range come with AMD’s reference cooler. In general, this generation's reference coolers run significantly hotter under load than AIB partner coolers, so we chose the GTX 1060 and its ACX heatsink to improve value without exceeding launch MSRP.

As for performance against the $200 3GB alternative, we've got that write-up over here.

Intel Core i5-6400 ($183): We went with an Intel i5-6400 for our CPU duties. The i5-6400 gives us four physical cores running at 2.7GHz base with Boost up to 3.3GHz. A 65W TDP and reasonable cooling (from the case) allows us to get away with the stock Intel heatsink – provided only on non-K SKUs, these days – though this would be a good aftermarket optional extra. We opted to save a few dollars on our CPU since most users won't overclock, and those who plan to can check our K-SKU build guides. Even aside from this, the GPU performs most of the heavy lifting for games these days, with only a few (GTA V, Metro: Last Light) truly stressing the CPU to the point that a 1060 might notice. The i5-6400 currently is best option in this price point. AMD's Zen should compete at this price-point once it begins shipping, but that's still a few months out.

G.Skill Ripjaws V Series 8GB (2 x 4GB) DDR4-2133 ($41): We threw in 8GB of G.Skill V Series DDR4 for this build’s memory. It was a toss-up going to 8GB of RAM over 16GB, but we opted for price friendliness and made the decision to go with 8GB. The cost of 8GB vs. 16GB scales linearly per gigabyte, and an extra $40 on 8GB more RAM should only be spent in specific use cases where the user will run memory-intensive programs. Generally, these aren't games – at least, not today. And anyone running production workloads that might demand 16GB+ should probably be on a better CPU, anyway.

The Premier SP550 uses Silicon Motion’s SM2256 controller, which gives mid-range read and write performance of 503MB/s and 456MB/s (respective R/W). The performance of this SSD won’t blow the competition out of the water, as it performs around the low-end of the pack against other top-tier SSDs from Samsung and Crucial. Higher-end SSDs, like the Samsung 850 EVO will give better mixed read and write performance, but the $60 price-point is fairly unbeatable for a gaming machine.

WD Blue 1TB 7200RPM ($50): For additional games and media storage, a 1TB HDD at 7200RPM will suffice. We'd recommend loading the SSD for the OS and primary application usage (browsers, Adobe suite, so forth), then push everything large and not I/O-intensive to the HDD.

EVGA 430W PSU 100-W1-0430-KR ($35): Juicing our build is an EVGA 430W power supply. This PSU comes with an 80 Plus Efficiency rating (just 80 Plus – no metallic assignee) and can push a maximum of 430W. Our build relies on a CPU which cannot be overclocked, and the GTX 1060 does not support SLI, so we were comfortable going with a lower-wattage power supply without focus on future upgrades. This lower wattage PSU runs $35 and gives us an inexpensive way to power our components.

Corsair 200R ($50): Wrapping everything up is a Corsair 200R case. This case is easy for first time builders to use and comes with an inexpensive price tag of $60, pre-rebate. The enclosure includes 2x 120mm fans, one mounted as front intake, the other as rear exhaust, and additionally supports fans mounted in the top and bottom of the case. 120mm radiators can easily be fitted for low-end liquid cooling, if preferred for the GPU or CPU – though that's certainly not necessary for this hardware.

Post on our forums for direct help, the comments below, or tweet at us for PC support.