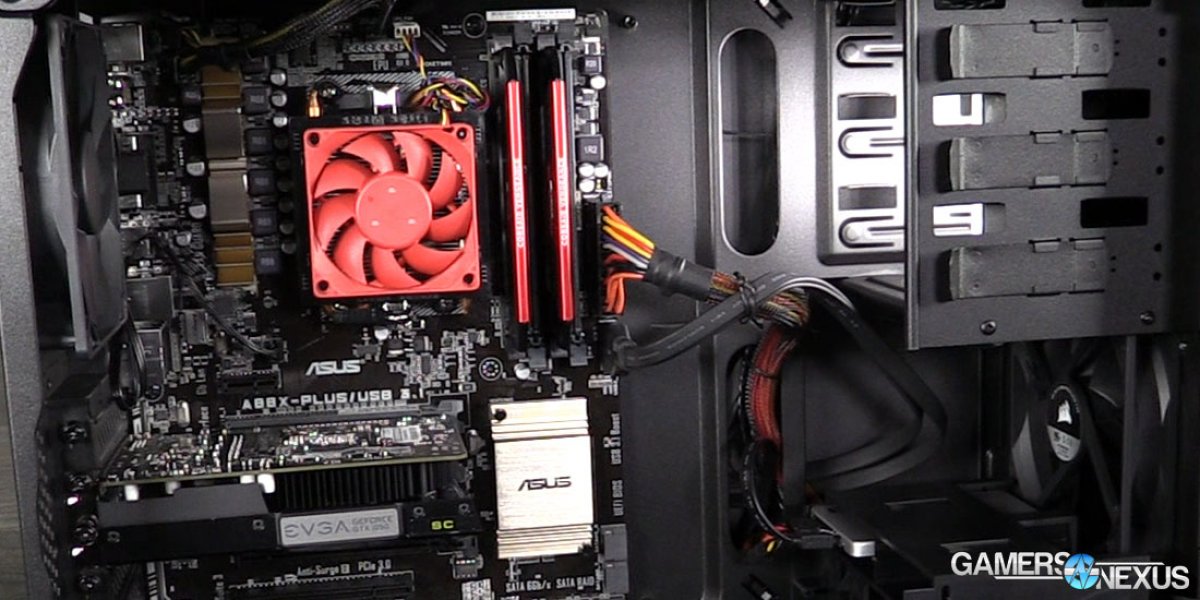 It's technically Thanksgiving here, and we need some easier content to consume to go with the rest of the consumption this weekend—and we mean consumerism and Black Friday, not food. Our latest experiment is a cheap gaming PC build for under $500, using an AMD X4 845 and GTX 1050 for games like Overwatch, DOTA2, and even GTA V.

Oh, and just for fun, we did throw in a Battlefield 1 benchmark -- it's just that this isn't an ideal configuration for that sort of game. Still worth learning about performance limitations, though.

The system build is detailed below.

How To Build a Gaming Computer (2016 Tutorial)

The article form of this walk-through can be found here.

EVGA GTX 1050 Gaming ($115): EVGA's take on the GTX 1050 was taken for this build. We recently found the GTX 1050, even at stock clocks, to outperform the RX 460 4GB cards in a considerable way. This is largely because devices like the RX 460 and GTX 1050 become bound enough by other components in the pipe (like ROPs) that the extra VRAM doesn't help much of anything.

The GTX 1050 is capable of playing games like CSGO, DOTA2, Overwatch, and Rocket League at 1080p with high to ultra settings. Our only limiter here, as we'll discuss soon, is the CPU. In our testing, we found the Athlon X4 845 to be powerful enough for medium-settings gaming in most games tested, but insufficient to sustain high low FPS values with Ultra settings.

Regardless, the configuration -- for its sub-$500 asking price -- is still pretty damn powerful. Here's a preview of performance of this complete system: 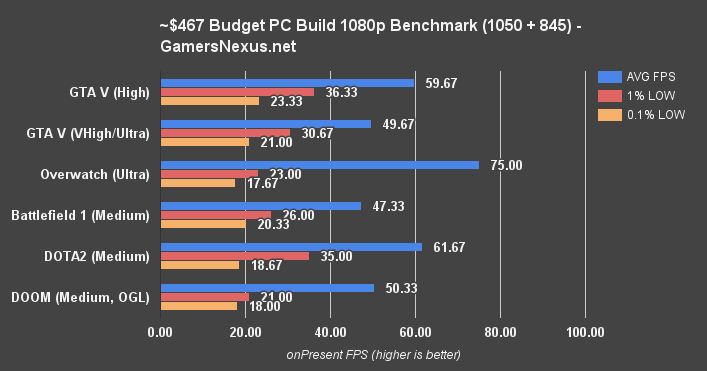 Testing with GTA V at 1080p with "High" settings configured across the board, though with the three sliders maxed, we're seeing an average FPS of about 60FPS, with lows around 36FPS and 23FPS. It's not terrible, when you consider that this is a $68 CPU and $115 GPU. The stutters can be partially resolved by reducing CPU-intensive graphics options further, but they are infrequent enough that a builder on a budget can reasonably enjoy GTA V at "High" settings.

At "Very High" and "Ultra" settings, performance is a little more stutter-y, but still surprisingly un-terrible. The CPU is hurting performance the most with GTA V.

Moving to Battlefield 1, we're seeing performance with 1080p/medium settings at around 47FPS AVG, 26FPS 1% lows, and 20FPS 0.1% lows. The dips in frametimes and framerate are definitely noticeable here. We saw about an 8FPS improvement moving from Ultra, at 39.7FPS, to Medium, but you might still have to shift down to low settings, and even then, you'd be dealing with difficulties when running multiplayer. If you have your heart set on Battlefield 1, it's probably best to invest a bit more in something more powerful. An i3 would be a good start, as would a 1050 Ti or RX 470.

DOTA2 with medium settings at 1080p produces an AVG FPS of 61.7, with lows hovering around 35 and 19FPS. Not bad, though with occasional stutters.

Next, with DOOM at 1080p and medium settings in OpenGL, we're seeing an FPS output of about 50.3 AVG, 21FPS 1% lows, and 18FPS 0.1% lows. Vulkan negatively scales with this particular setup and isn't worth using.

AMD Athlon X4 845 ($68): The Athlon X4 845 is one of the cheapest CPUs on the market that's still capable of gaming. It's not a perfect solution, but it's a low-end quad-core APU with the IGP disabled, leaving you with an affordable CPU. This will limit us in some games, though that can be accounted for with settings reductions to CPU-intensive effects and graphics.

ASUS A88X Plus ($93): We had this board lying around in inventory, and decided to deploy it for this build. The A88X chipset is AMD's top-of-the-line FM2+ platform, and gives us full compatibility for the maximum memory speed supported, a reasonably low price, and some basic tuning functions within AI Tweaker. You could probably go cheaper on the board, but this one worked well for our purposes (and we had it available).

Corsair Vengeance Pro 2x4GB 2133MHz ($53): Corsair's Vengeance Pro memory has been through our bench a number of times. At 2133MHz and with fairly tight CAS latencies, we'll be eliminating memory from any likely bottlenecking in gaming applications. With the X4 845 and 2133MHz memory, we're likely to choke more on the CPU than the RAM. 8GB is more than enough for this budget gaming build. It's true that some games, like Galactic Civilizations III, will consume huge amounts of memory -- but that's exceptionally uncommon. You'll be OK on 8GB with this build.

EVGA 500W 80 Plus White ($38): This build could actually operate on a 300W PSU and still have a marginal amount of headroom, if you wanted. Unfortunately, the PSU market in the sub-500W range starts to enter territory of questionable value (for the good/trustworthy units), or just potential for a lot of harm (for the cheap units). Here's a look at our power draw testing:

This is a look at the build's power consumption. Power draw is about 143W when running CPU+GPU intensive gaming workloads, with idle desktop consumption at about 39W. That's after accounting for PFC and efficiency.

WD Blue 1TB 7200RPM ($50): For a baseline drive with a lot of storage, a 1TB HDD at 7200RPM still makes the most sense -- but we're starting to trend more and more toward suggesting SSDs as the "starter" drive for a system. Even if this means buying an HDD in a few months, once you run out of space (depending on how many games you've got), it's just easier to start with an SSD. You won't have to rebuild your OS environment if starting with it on the faster disk, whereas a starter HDD and later-added SSD would necessitate cloning or re-installation of the OS. A bit of a hassle.

Still, if you're after a higher capacity of cheap storage, even if it's slower, then an HDD still makes sense.

Plextor M7V 128GB SSD ($50): Plextor's M7V SSD at 128GB is currently $50, through active sales on Amazon (Black Friday and otherwise). This brings our boot times down to around 15-seconds (could be faster if configuring BIOS to allow faster boots), and speeds-up application open/close times significantly over a traditional spinning disk. It's also quieter, contributing to our fairly reasonable noise output that's shown below.

Corsair 200R ($50): Corsair's 200R enclosure remains one of the best-built options in the ~$50 market. This is technically a $60 case, but is almost always available at $50 -- right now, that's through MIRs on Newegg. The enclosure has exceptionally easy drive management for 2.5" drives and SSDs (completely screw-less system), is easy to build in and relatively spacious, and offers sufficient cooling for ourpurposes.

Here's a quick look at temperatures in the case:

Because we can't take an accurate temperature measurement of AMD's CPUs, since they don't report properly to software and always appear colder than ambient -- which is impossible -- we're only looking at GPU temps, here.

Looking at Delta T values, the GTX 1050 Gaming from EVGA is hitting about 26.8C under a simple gaming workload. Add your ambient temperature for an idea of where that'll land in your environment. Idle is at about 3.85C dT. The case is definitely providing adequate cooling for these components. 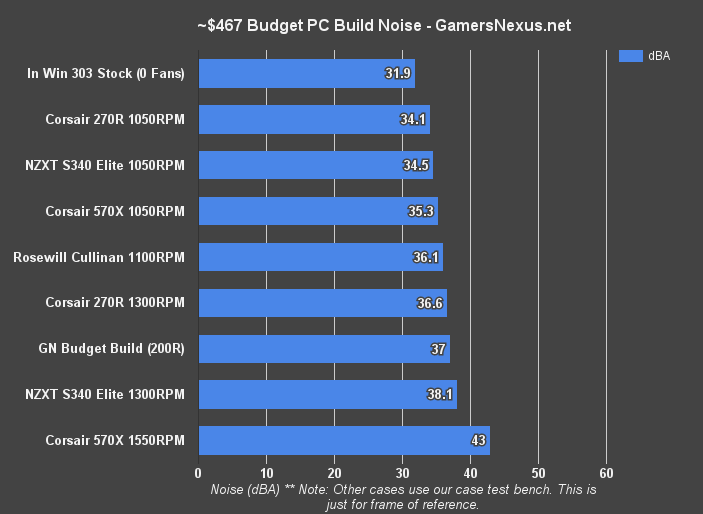 Under a gaming workload and with max case fan speed and auto-controlled CPU and GPU fan speeds, we're seeing noise levels of about 37dBA. You could lower noise levels significantly by opting for a tower cooler, but that does start to add cost pretty. For thermal reasons, it's not necessarily worth the investment. For noise reasons, it might be -- that's up to you.

Overall, not bad. The build is pretty damn good.

So, then, the conclusion: Is this type of build worth it? Well, it depends on what you're doing. You shouldn't expect an 845 and GTX 1050 to handle a game like Battlefield 1 very well, especially not in 64-player servers. For Overwatch and DOTA2, performance is perfectly fine as long as you're willing to sacrifice a few settings that are CPU-heavy. GTA V worked surprisingly well, and would play fairly fluidly on this build if running medium settings.

If you needed more storage capacity, this is an instance where buying a traditional hard drive -- although it creates more work for you when migrating later -- would help reallocate that $50 SSD purchase into a CPU (like an i3). That'd be a big change in performance. But again, it's more work later on to migrate, and we do think that SSDs are generally worthwhile for most users. Not every build needs one, but they're important.

We'll soon be working on an i3 build. Keep an eye out for that.